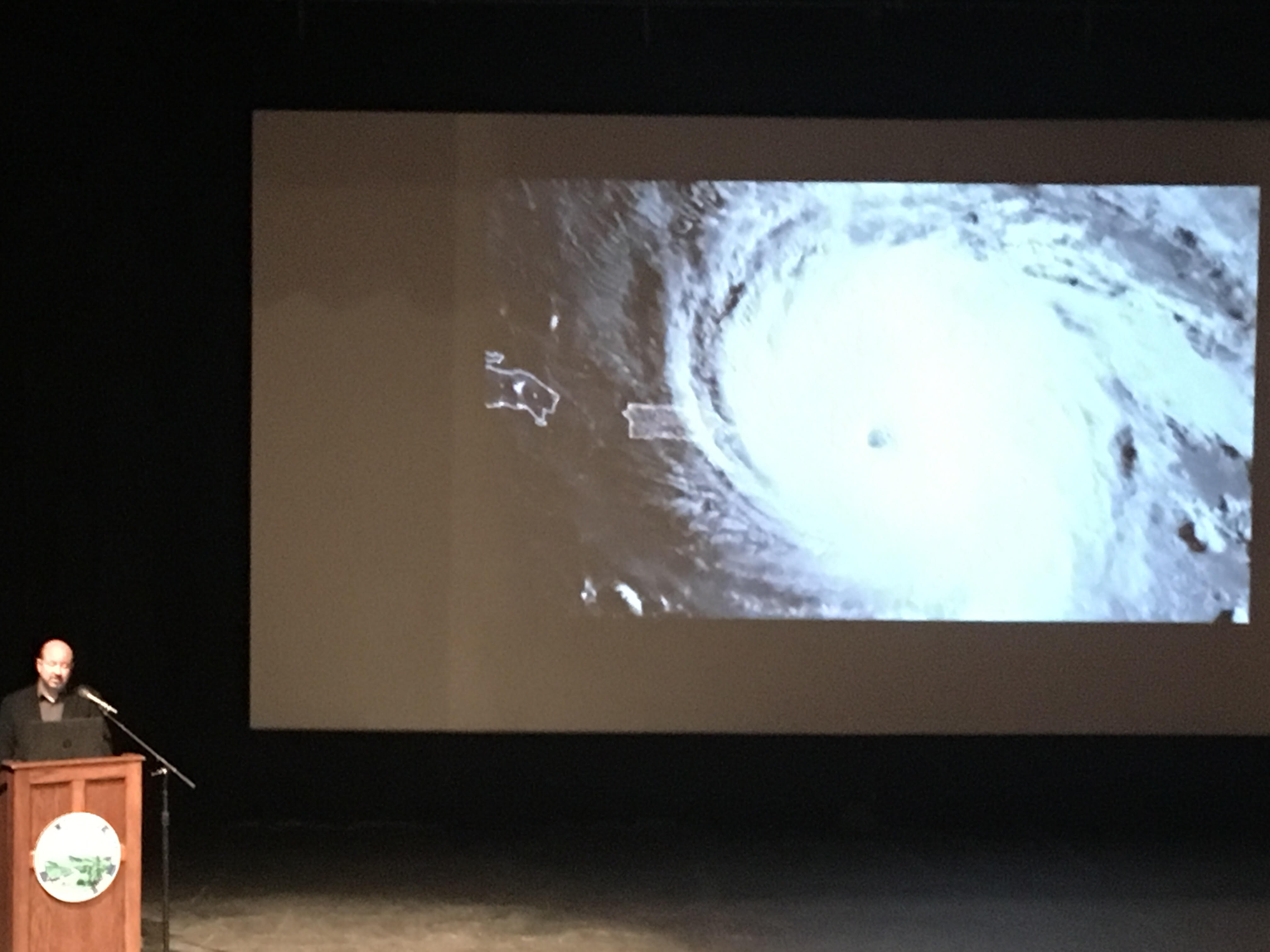 Renowned climate scientist Dr. Michael Mann visited the Berkshires on Friday and spoke to audiences in Pittsfield and Dalton on the political “war on science” and why he remains optimistic despite the influence of special interests polluting the public discourse.

“We’re going through a cultural tipping point right now,” he told the crowd gathered in the auditorium at Berkshire Community College, including students from Pittsfield and Taconic high schools. “Much of my optimism comes from you folks in the front few rows, high school students who are now speaking out and demanding that those in positions of authority act on our behalf and not the special interests that may be funding their campaigns.”

Mann, Professor of Atmospheric Science and Director of the Earth System Science Center at Penn State University, discussed the state of climate science and the record-breaking extreme weather events in 2017, the stages of climate denial, the risky idea of geoengineering, and positive developments in politics and action. His talkwas based on his book co-authored with Pulitzer Prize winning political cartoonist Tom Toles titled The Madhouse Effect: How Climate Change Denial Is Threatening Our Planet, Destroying Our Politics, and Driving Us Crazy.

He began by calling out the mainstream media’s role of providing an “echo chamber” for climate denialists and portraying the science with a sense of false balance giving equal weight to both sides. “Too often in our media it’s treated as if there are two sides that deserve an equal say in our public discourse,” he said.

“These storms have been made more intense, more destructive, and they produce more flooding rains because of the warming planet,” Mann said.

Conversely, warming contributes to severe droughts like those in California and other areas of the world. The instability and terror in Syria is linked to an unprecedented drought that drove rural farmers into crowded urban areas, exacerbating tensions and resource conflicts.

“When our president says we shouldn’t worry about climate change, we should worry about more immediate threats like ISIS and international terrorism, there’s a deep fallacy in that sort of reasoning,” said Mann.

He pointed out that while some are advocating for a technological fix such as spraying sulfur particles into the sky or other planetary-scale interventions, this is likely to have unintended consequences that could put us at even greater risk. The real solution, he said, is to rapidly reduce fossil fuel combustion and greenhouse gas emissions.

“Despite having a president and a Congress that is still on the wrong side of this issue, we are seeing progress.” He mentioned Pope Francis’s moral call to action, global cooperation in signing the Paris Agreement, and sub-national climate action commitments from U.S. cities and states.

He is especially glad to see young people starting to speak out, referencing the Parkland students demanding action on gun control. “We’ve seen this emergence of the voice of our youth,” he said. “Young people have become restless and they recognize their future is in peril.”

Mann again referenced this source of optimism speaking Friday evening at the Stationery Factory in Dalton. The event was an extended Q&A format with Mann fielding questions on a range of climate-related topics.

Several high school students from Miss Hall’s School attended the evening session with Dr. Mann. Anna Le, a 17 year-old junior, said she is passionate about environmental science and that the event inspired her to work on her speech that she would present the following day at the March for Science in Great Barrington.

In her remarks, Le echoed Dr. Mann’s call to speak out in standing up for science. “We can use our voices to raise awareness and be role models for our family members and younger generations,” she said.

Le is emblematic of the “cultural tipping point” that Mann says gives him hope. “We’re seeing something we haven’t seen in a long time,” he said. “Young people seizing the narrative and drawing upon the moral authority that they have.”

Listen to Anna Le and two other Miss Hall’s School students express their concern about climate change in video below: