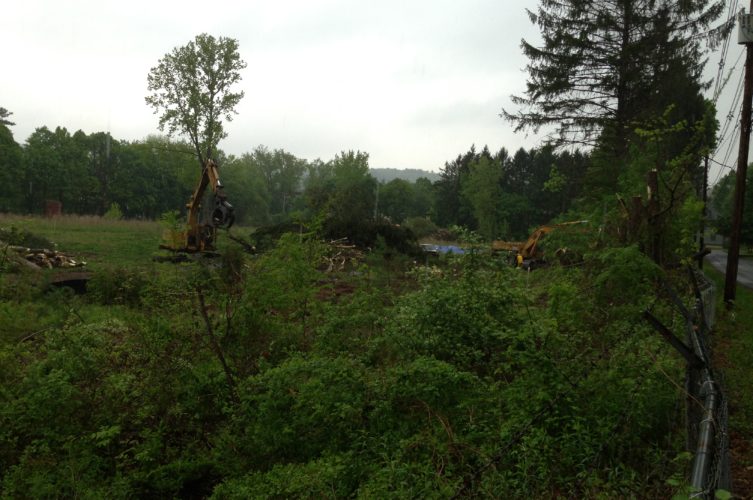 Great Barrington — To pollute and run has been the American way. Just think about General Electric and what it did to the Housatonic River before abandoning Pittsfield.

And capping contaminated sites or dredging the polluted material for shipment elsewhere for treatment has been the American way of dealing with the detritus of industrial manufacturing.

But there may be another method to rid the land of dangerous chemical contamination, and Great Barrington is about to become a laboratory to test a cleanup technique, termed bioremediation, that will actually neutralize the pollution. If successful here, it could revolutionize the way thousands of industrial parcels are cleansed of pollutants. It is the first time this method, developed by the North Carolina-based BioTech Restorations, has been used in the Northeast.

The so-called lab is the 8-acre, dioxin-laced site of the former New England Log Homes (NELH) on Bridge Street, bordering the Housatonic River, purchased in 1997 by the Community Development Corporation of South Berkshire (CDC) for $1, after its owner filed for bankruptcy, leaving its contamination for others to address. 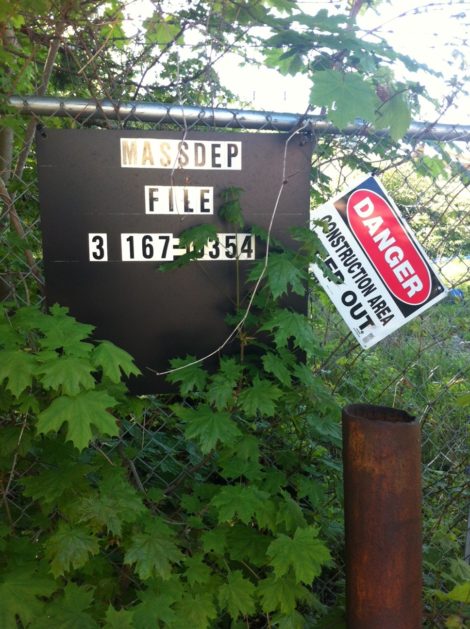 New England Log Homes went under in 1994 and the site has sat there ever since, because of, explains CDC Executive Director Tim Geller, “the corporate veil of responsibility.”

Since acquiring the property, the CDC has drafted a plan to transform the site into a market-rate and affordable housing complex, a commercial center that may see an expanded Berkshire Co-Op Market, and a community gathering space along the river.

“It will be the town piazza,” explained CDC Executive Director Tim Geller, “with maybe 60 new housing units right dead in the center of town, both affordable and market-rate, and probably 40,000 to 50,000 square feet of commercial.”

But before these plans can be realized, the property needs to be decontaminated. The soil is saturated with high levels of dioxins and pentachlorophenol (PCP), carcinogenic chlorinated organic compounds that were used by NELH as preservatives.

“The reason these chemicals are so nasty is that they were designed to never break down,” said Geller, who for 12 years has been trying to find a way — and the money — to clean the site. It took five years, he recalled, just to put together the $1.2 million in grants and loans to demolish the old buildings. That work was completed in 2012.

The bioremediation process involves applying an ingredient to the soil that will enable bacteria to break down the organic compounds just as they would normally do if the configuration of chlorine atoms in the dioxins did not inhibit their activity.

This week, crews from Maxymillian Technologies began to clear the Log Homes property of trees and vegetation to prepare the parcel for bioremediation.

Geller learned about bioremediation two years ago when he attended a Housatonic River Initiative-sponsored presentation in Lenox Town Hall. Before an audience that included top Environmental Protection Agency officials from Boston and Washington, BioTech Restorations president Christopher Young proposed that his bioremediation process be adapted to remove PCB contamination from the Housatonic River.

Impressed with what he heard, Geller asked Young if his company could do something about the dioxins at the Log Homes site. Biotech’s success at de-chlorinating PCBs both in the lab and in the field led the company to conclude that its process could also take care of dioxins, which are more difficult to degrade.

“These compounds were a great boon for industry because they persist for generations,” Young explained from his North Carolina office during a phone interview. “The curse and the blessing of dioxins is that they are highly stable. They tend to stay put.”

Young knows about toxic compounds. He once was a pesticide developer for Dow Chemical.

“I’ve come in from the dark side,” he quipped, using the “Star Wars” metaphor.

Along with Dr. Valerie Paynter, his partner in the North Carolina-based company that was formed in 2005, Young has already used his process to reduce pesticide levels at a number of sites, and to neutralize PCBs both in the lab and on a 5-acre property in California.

The Log Homes site, however, will be his first real-world test for dioxins. Soil from the site was bench-tested in the lab this winter: the process reduced dioxin levels to almost nothing in 10 weeks, better than the 20 nanograms per kilogram goal mandated by the state Department of Environmental Protection.

That the dioxins were degraded so successfully is yet another indication that Biotech’s technology could destroy PCBs bound to sediment in the Housatonic riverbed, banks and flood plain. After the EPA looks at the success rate at the Log Homes site, Young predicted, “it won’t be much of a jump for them to appreciate its application in the Housatonic.”

At the moment, BioTech does not have a patent on its bioremediation techniques. But that will soon change. The company is so confident of its approach that during the Log Homes cleanup the company intends to apply for what Young described as a “broad patent” for its bioremediation methods.

It is an astonishingly clean and straightforward process, he explained: “We are simply restoring to bacteria the natural function inherent to their physiology.”

The company uses what it calls a “Factor,” an elixir formulated of “a simple protein, so safe you could eat it,” Young noted, to treat the indigenous bacteria in the contaminated soil by helping it to secrete enzymes that degrade the offending chemicals. Since the tenacity of the contaminant suppresses the bacteria’s ability to degrade them, treatment with the Factor gives the “bugs” some help.

The process is actually quite simple: the Factor will be applied to the soil using common farming methods and equipment – tractors pulling discs. The soil will be turned and then irrigated using water from the Housatonic every 7 to 10 days or so, depending on whether there is rainfall.

“When they walk by most people will think we’re planting a crop,” he said. “The water and cultivation lets the bacteria do what nature designed them to do. It’s a very green, very sustainable solution to complex problems.”

The procedure will run during the warmer months and through the summer, as the particular bacteria that destroy the chemicals can only be active in warm weather.

The first noticeable evidence of the cleanup will be the total clearing of the Log Homes site – even the trees bordering the property along Bridge Street since 100 percent of the site must be remediated.

Geller, who calls himself “the tree-hugger of all tree-huggers,” said he had to let them go.

In a sustainable twist, though, logs from suitable trees will be hauled to the Great Barrington Fairgrounds where they will be milled by Will Conklin of Greenagers to rebuild the cowshed.

Young added that the trees themselves – and thus the wood for the cowshed — are not contaminated since dioxins prefer the soil.

The “farming” part of the bioremediation will begin in the first or second week of June, followed by “spurts of activity,” according to Geller. Electronic dust monitors overseen by a licensed site professional will remain on three sides of the property throughout the process to insure that no soil escapes.

“There are stringent dust control measures,” he said, “and anytime it’s plowed it will have to be irrigated. If the wind blows more than 20 miles per hour they’ll have to stop work.”

“It is the first large-scale clean up of dioxins using this technology,” observed Young, of the process he also says works quickly and is cheaper than typical remediation.

Indeed, the roughly $2 million price tag, to be paid by a grant from the MassDevelopment Brownfields Redevelopment Fund, is a fraction of the cost of hauling contaminated soil to a dioxin disposal facility, of which there are significantly fewer than there were at the turn of the millennium. To do it the usual way would cost “more than $32 million,” according to Biotech.

In addition, the town has been “hugely supportive,” Geller pointed out, forgiving $300,000 in back taxes that New England Log Homes owed when it folded in 1994. And another key component in the complex financing package for the project has been the support of TD North Bank, which forgave the bankrupt company’s $1 million mortgage.

The New Marlborough-based Benchmark Development, LLC, run by Michael Charles Carotenuto and Brian Cohan, will serve as general contractor to oversee the remediation and redevelopment of the site. Maxymillian Technologies of Pittsfield will do the initial site clearing, and the bioremediation work will be handled by subcontractor Thistle Doo of Lenox, with Young consulting for Biotech.

Geller is enthusiastic about what will happen on the cleared and cleaned Log Homes property, which occupies a key spot in downtown Great Barrington.

The Berkshire Co-Op Market has expressed strong interest in expanding and relocating to the site, Geller said, and the CDC is “actively working” with the Co-op for a commitment.

“It will add density to the center of town,” he said, of the smart growth plan he hopes will eventually be fleshed out with an extension of the Housatonic River Walk, a National Recreation Trail. “And we’re not carving out a commercial strip and we’re not carving up farms for development.”