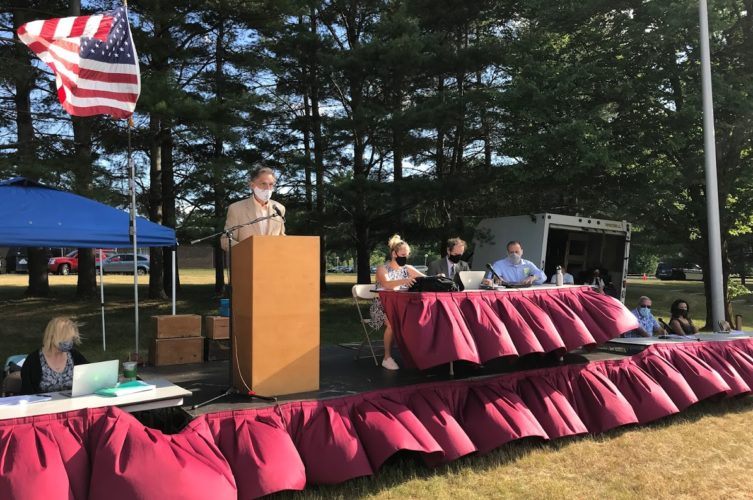 Great Barrington — At a continuation last night of the annual town meeting, voters overwhelmingly voted to close Lake Mansfield Road to vehicular traffic, and in so doing, soundly rejected a citizen petition proposal to keep it as a two-way road “in perpetuity.”

The continuation of the meeting was necessary because Monday’s meeting, held in the parking lot of Monument Mountain Regional High School for physical distancing purposes, lasted longer than expected.

The initiative was brought forward by local government watchdog Steve Farina. Farina described his proposal in a letter to the editor of The Edge last fall. Click here to read it and see the video below of Farina making his pitch, along with the ensuing discussion:

About 15 people spoke on the proposal. Several who spoke against it were members of the Lake Mansfield Improvement Task Force, which spent more than 10 years working on a comprehensive plan for restoring and maintaining the lake that included a plan to close the road to vehicular traffic.

Among those speakers was Christine Ward, who chairs the task force. Ward also made her position known in a letter to the editor of The Edge. The recently repaved road is currently one-way heading north from the boat launch to the beach.

Click here to read the task force’s four-page report recommending the permanent closure of Lake Mansfield Road and the road’s replacement with a recreation path in that corridor.

Task force member Brandee Nelson, who also chairs the town planning board, told the approximately 150 people in attendance that the road is falling into the lake and must undergo extensive repairs just to remain functioning. Keeping it as a two-way road for vehicles would be very costly to town taxpayers and very few grant opportunities are available, so the town would likely be on the hook for millions.

“A recreational trail, on the other hand, does have significant opportunities for grant funding,” Nelson explained.

Cynics have suggested the task force is comprised mostly of residents of Great Barrington’s upscale “The Hill” neighborhood who would benefit greatly from the road closure through less traffic and the resulting increase in property values.

Others, including Christian Hill Road resident David Ryel, objected to the increased traffic the closure would cause in the affected neighborhoods, and the obstruction it would cause for emergency vehicles traveling from the northern part of town to Fairview Hospital. However, the town has said police, fire and ambulance services would be exempt from the ban on traffic.

But in the end, the task force had far more support. The measure needed a two-thirds majority to pass and it failed 20-115.

Selectboard Chair Steve Bannon said Lake Mansfield Road, which is temporarily one-way, will be closed to vehicular traffic anyway within a span of 18 months to two years.

The only other items taken up were zoning initiatives, including one that would have modified a town zoning designation, Mixed Use Development or transitional zone, which allowed, for example, mixed-use proposals such as the controversial Manville Place to be approved for residential neighborhoods. Both proposals failed by overwhelming margins.

The remaining petitioner items were passed over until a special town meeting could be scheduled for later this summer.

See video below of the discussion and vote on the zoning amendments: