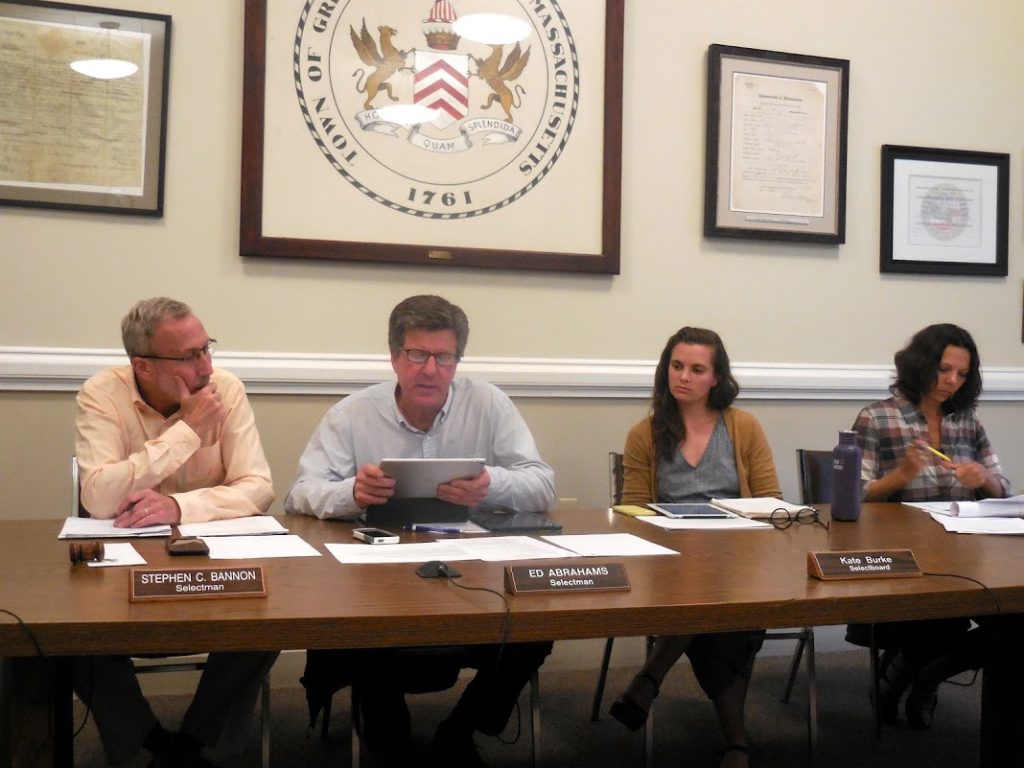 In this file photo from May 2019, members of the Great Barrington Selectboard deliberate during a meeting in Town Hall. From left are Chairman Steve Bannon and members Ed Abrahams, Kate Burke and Leigh Davis. Photo: Terry Cowgill

Great Barrington — Amid a groundswell of opposition to a controversial statement on the COVID-19 pandemic issued by a local libertarian think tank, one selectboard member is calling on her fellow board members to denounce the Great Barrington Declaration and to disassociate the town’s name from it.

Meanwhile, late Thursday afternoon, the town issued a statement distancing itself from the declaration. Town manager Mark Pruhenski said it “undermines the town’s COVID-safe efforts,” and he added that Great Barrington is “among the lowest risk towns in the state, and we hope to keep it that way.” The entire text of the release is published at the end of this article.

Selectboard member Leigh Davis recently sent an email to The Edge and many of her constituents indicating that she will be drafting a letter to her fellow selectboard members and will present it at the board’s next meeting Monday, Oct. 26.

At our next selectboard meeting on October 26th, I will be presenting a letter to my fellow selectboard members that invite them to join me in denouncing the views expressed in the Great Barrington Declaration. With a call for the Town to dissociate itself from the Declaration’s promotion of herd immunity, this letter will point to the positive gains made by the Town in limiting the spread of COVID-19 through our diligent practice of social distancing, mask-wearing, and sanitizing.

Suggestions concerning this letter are welcome. Please email me directly at leighdavis99@gmail.com.

There was also much clamor on TheHillGB, a neighborhood Google group founded by Great Barrington resident Karen Christensen, as well as on social media. Most were critical of the American Institute for Economic Research for naming the declaration after the town.

AIER, a free-market think tank on Division Street, held a private forum on the COVID-19 pandemic on Oct. 3 that included epidemiologists, economists and journalists.

The result was the Great Barrington Declaration, a document of more than 500 words that endorses a concept called “focused protection,” better known as “herd immunity,” the virus-fighting strategy that relies on a large portion of a community becoming immune to a disease, thereby making the spread of disease from person to person unlikely.

In the absence of a vaccine, the only way to achieve herd immunity is through infection. Many epidemiologists have cautioned against that strategy. Dr. Anthony Fauci, who advises President Trump on the coronavirus, has said if that strategy went into effect, “The death toll would be enormous.”

“That declaration has a couple things in it that I think are fooling people, because it says things that are like apple pie and motherhood,” Fauci, director of the National Institute of Allergy and Infectious Diseases and a key member of the White House coronavirus task force, told George Stephanopoulos.

See video below of Dr. Anthony Fauci being interviewed by George Stephanopoulos on ABC’s “Good Morning America” on Oct. 15. Fast forward to 4:20 to see his assessment of the Great Barrington Declaration:

In another development, the Boston Globe says several Boston-area researchers are among the authors of an open letter published Wednesday evening in the prestigious medical journal the Lancet characterizing herd immunity as “a dangerous fallacy unsupported by the scientific evidence.”

On TheHillGB, a woman who identified herself only as “Barbara” posted the text of a letter she intends to send to the selectboard as well:

The views widely disseminated by AIER are very harmful to our community on two accounts:

Please work out a way that we can send out a disclaimer to any such encouragement to avoid protection to all and any publications involved, or perhaps insist that they publish that very clearly themselves.

Hill resident and former town finance committee chair Sharon Gregory suggested a petition asking the selectboard to write a letter to AIER objecting to naming the proclamation after the town and “implicating the support of Great Barrington by inserting it in its name.”

Town resident Susan Pettee, an attorney, agreed: “The town’s name has to be taken off that statement. The town did not agree to have its name used; neither did its residents.”

Hill resident Brian Grossman added that he would prefer “the town to focus on those issues that are most pressing, including the policies we enact to address the pandemic and ensure the well-being of our residents, especially those who are most impacted by covid.”

Grossman added that a town resolution clarifying the issue was one thing but attempting to force AIER to remove the town’s name from the proclamation could raise First Amendment issues.

“I am not a constitutional lawyer, but I am dubious that the selectboard has the power to override the First Amendment,” Grossman said. “Are we trying to scrutinize the tax status of the institute where the declaration was made? Would that set a precedent that could potentially have a chilling effect on free speech?”

In an interview, selectboard member Ed Abrahams said he thought the Great Barrington Proclamation was a “boneheaded statement,” but agreed with Grossman that putting the town’s name on it, while regrettable, was a matter of free speech.

“I wish it hadn’t happened,” Abrahams said. “They used the name of our town because that’s where it was signed. The Paris Accords were signed in Paris and I don’t think the people of Paris formally approved that document.”

As Abrahams sees it, there is little the town can do, adding: “I’m sorry our name was on it. There’s nothing we can do other than making it clear that we do not endorse it.”

Abrahams also noted the town’s name is on a line of Ralph Lauren bedding products, though it’s possible those pillow shams and dust ruffles are named after the village of Great Barrington in Gloucestershire, England, from which the southern Berkshire County town derives its name.

For months, the town of Great Barrington, Massachusetts has strived to be a COVID-safe community. But this hard work is now challenged by the controversial “Great Barrington Declaration.”

The Declaration, advocating a herd immunity COVID-19 solution, was developed and distributed by the American Institute for Economic Research, located in our town. The town itself had no role in, or forewarning of, the declaration bearing the town’s name.

Many local residents, business owners and town leaders, riled that the town is now associated with the Declaration, wished to clarify the record.

“We are a COVID safe community, we are not tossing off our masks,” said Town Manager Mark Pruhenski. “This Declaration has gained national headlines and has created harmful misperceptions — just as we are doing all we can to protect residents, employees and visitors.”

Townspeople have been following protocols for preventing virus transmission, following CDC and other public health guidance, and common sense. Businesses are following our town’s own GBSafe program, for both employee and customer safety.

“We wear masks, keep safe distances as we can in public,” said Selectboard Chair Stephen C. Bannon. “We find enjoyment in our vast open spaces, trails, lakes and rivers, hiking, biking, and exploring. We have safe social pods with neighbors, family and friends.

“We are among the lowest risk towns in the state, and we hope to keep it that way,” he said.

Many town leaders believe herd immunity is a dangerous COVID-19 strategy: Achieving herd immunity levels could cost millions of lives, and this is unacceptable, particularly in a nation where far too many people live with risky, underlying health conditions. Many hospitals and front-line workers have been overwhelmed by vast waves of stricken patients.

We share one aspect of the Declaration: great empathy and concern for the pandemic’s toll on communities, businesses, families, children, isolated elders.

Anyone who might avoid Great Barrington, due to confusion over the Declaration, is invited to visit and see how COVID-safe works in a small New England town.