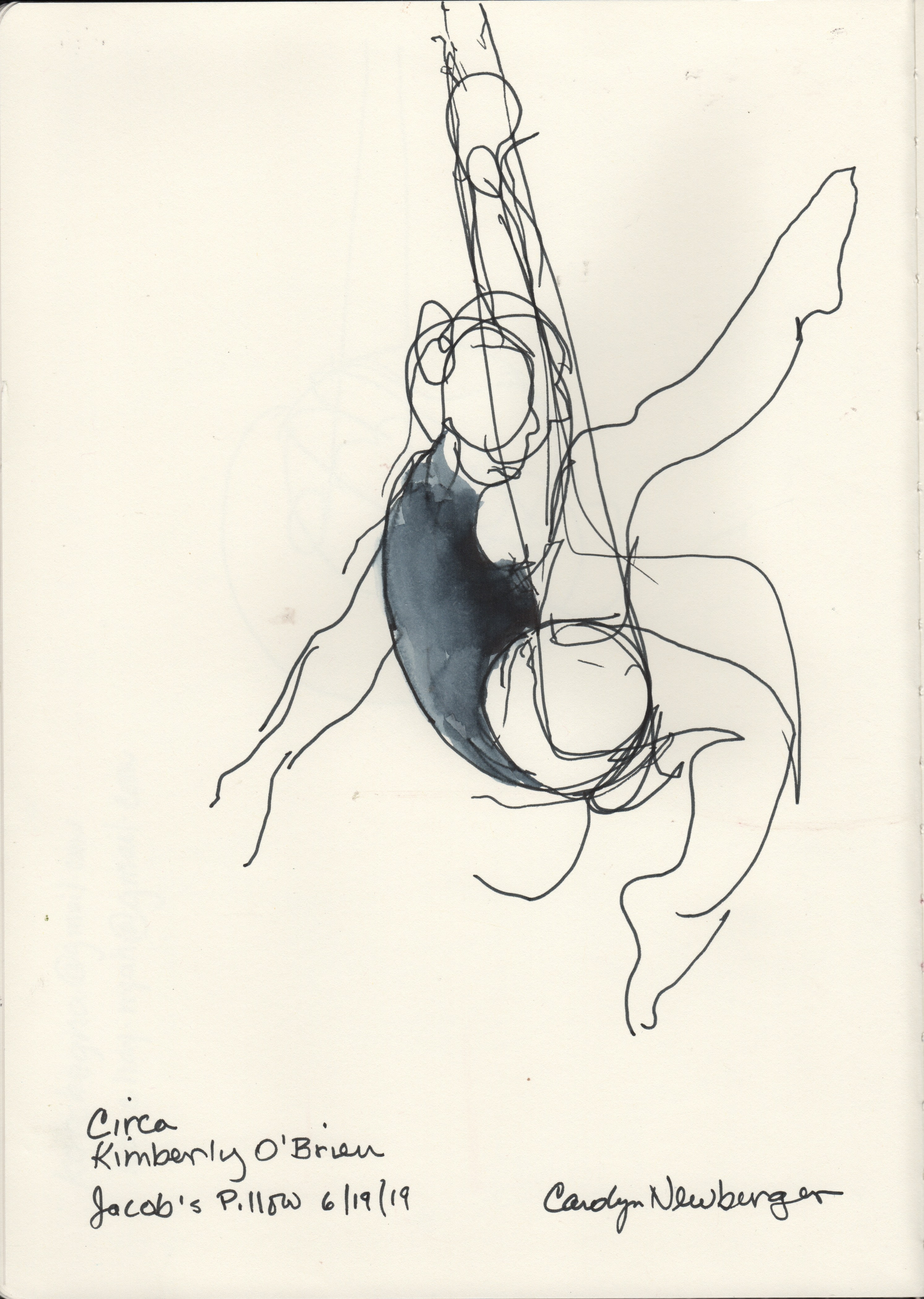 Circa opens with an almost empty stage, a double rope with hand loops hanging from the center ceiling.

A lone woman (Kimberly O’Brien) enters from the left, simply clad in black shirt and white pants, and quietly grabs the loops of the rope with her hands. Slowly she begins to raise her feet and circle, gaining momentum while rising higher and higher, until suddenly, with an imperceptible shift, she is folding herself upward upside down. This lone figure moves reflectively, in no seeming hurry, as she unfolds and refolds, extending and contracting her arms, legs and torso as though exploring the capabilities and boundaries of woman, rope and space.

To her right and a little back, violinist Lachlan O’Donnell plays Bach, wrapping the acrobatic movement in the extended linear progression of a partita. O’Donnell’s performance focuses less on the interior beauty of the inventions than on the their danceable rhythms, and especially the directions of the melodic lines. Sometimes, watching intently, he matches with precision the performer’s upward reaches and sudden downward descents. Brilliantly as well, he creates a counterpoint to O’Brien’s lines. This was Bach as never before witnessed, in 3-D!

Enter the men (Daniel O’Brien and Hamish McCourty). As the solitary woman exits the stage, the two men bound in, not reflective at all, racing at each other and narrowly missing; lunging and missing again; falling with fearsome splats; springing up and around; conveying a kind of bumbling ferocity, but with oh, so much precision, power and sheer athletic virtuosity. The recorded music of Philip Glass, urgent, repetitive, swirling, seems to propel them on and on and on.

This is the opening of Circa, presenting “What Will Have Been (2015)” on the Doris Duke Stage at Jacob’s Pillow on opening night. Circa Contemporary Circus, founded in Brisbane, Australia, in 2004 and directed by Yaron Lifschitz, is emphatically not the circus of Barnum and Bailey, with lion tamers and elephants, glittering costumes, and families of acrobats swinging over our heads in the peaks of giant tents.

Circa is spare of costume, prop and space. Rather, it focuses on circus as an essential human art, exploring the physical and emotional possibilities of acrobatic physicality.

Using each other’s bodies and simple props, the acrobats lift, tumble, fly and intertwine kaleidoscopically through space, sometimes impelled, sometimes restrained by, and sometimes in opposition to the live and recorded music.

“What Will Have Been” unfolds in six segments, each with its own movement, ensemble and musical personality.   The final vignette brings the three performers together in an embrace.

These vignettes, while not necessarily narrative, evoke a profound emotional response, seeming to touch deep chords within us. There is, of course, the extraordinary power, control and grace of the performers, but there is also breath-taking risk, their willingness to take the hard falls in propelling their bodies into places, shapes and movements that no human body should be able to go.

Inevitably, the momentary, stylized collisions between men seemed as contests for dominance, some resolving peaceably with embraces and acrobatic collaboration. Others ended with subtle gestures of subservience, or the vulnerable figure retreating to the scrim. In one stunning sequence, in which a male dancer steps slowly, first on the calf, then the thigh, and then the chest of Ms. O’Brien, there appeared a clear metaphor of misogynistic violence. (One can only imagine the exquisite care – and mutual trust – that went into rehearsing such pieces.)

At the end of the performance, our college-age grandson, who accompanied us, remarked, “This was the best performance I have ever seen.” We’ve seen many exalting performances at Jacob’s Pillow over the years, and expect to see many more, but this left us as well awestruck and moved.

For more information and tickets, visit the Berkshire Edge Calendar.