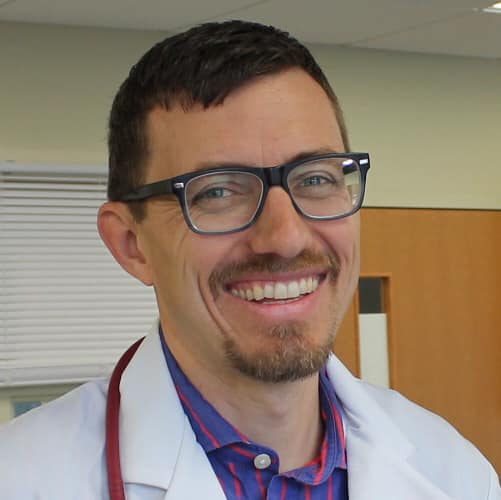 Lee — When Ray Garnett moved to the Berkshires five years ago, finding a primary care physician was at the top of his to-do list. “I was looking for a specific model of care,” he explained in a recent phone interview. Garnett, who identifies as a transgender individual, was looking for hormone replacement therapy via informed consent, which, in many places in the country, trans people can access at Planned Parenthood. There is no Planned Parenthood in Great Barrington, where Garnett lives and works, and the closest equivalent — Tapestry Health — did not provide this service. So he went to Springfield to have his medical needs met.

“Good LGBTQ care is really just good care,” is how Dr. Jeremy Stoepker sees it. “In creating an open, nonjudgmental, collaborative environment where the standards of care are met no matter who you are, what your background is, or what your disease process or screening requirements may be. It’s just good care,” he said in a recent phone interview. Stoepker’s arrival to the Berkshires, just six months ago as a provider, is changing the landscape of accessible health care for individuals who identify as LGBTQ, despite the fact that one’s sexual orientation and gender identity should be moot points when it comes to accessing health care.

“From the very beginning, I had role models and inspiration for how it can be done well seeping into my little brain,” said Stoepker, who was 7 years old when his father was diagnosed with HIV. “I don’t remember the journey so much as I remember the players,” he added, “and they were amazing.” Stopeker remembers his father’s doctors as loving and caring, supportive and nonjudgmental. “And really up-to-date,” he added in a nod to his father’s participation in the first clinical trial for the first HIV medication and survival for 20 years following his diagnosis. This remains Stoepker’s inspiration in his day-to-day work: caring for his patients while honoring his father’s legacy.

Stoepker is realistic about the examples of bad care that abound in any discipline of medicine, particularly primary care. As to how this manifests in the LGBTQ community? “People just aren’t up to speed with the type of screening that is recommended,” he said. Take the triple swab (or triple-site) testing for gonorrhea and chlamydia in men who have sex with men. “A lot of providers do not even know what that is or what that means,” said Stoepker, who explained that, potentially, one should be tested in the rectum, urethra and the back of the throat. Not getting the standard of care to which a patient is entitled is how this looks in its most benign form; in more upsetting instances, it is doctors saying they do not feel comfortable treating patients or openly shaming patients and being accusatory. “Which, unfortunately, happens to lots of patients, including those in the LGBTQ community,” Stoepker.

Alex Reczkowski of Pittsfield experienced this with his former primary care physician. It started with a routine conversation at his annual physical, one sparked by a startling statistic Reczkowski had heard: that 50 percent of men of color who have sex with men are estimated to be diagnosed with HIV before they die. This number made him pause. As a single, gay man, he decided to look into PrEP — pre-exposure prophylaxis, a one-a-day pill to prevent HIV infection. Reczkowski was looking for peace of mind, even if the medication was not necessary, and wanted to explore his options. His doctor assured him this was not necessary. After a second appointment, for the express purpose of getting a PrEP prescription, Reczkowski was denied. The conversation turned to shaming and the need to include a specialist on infectious disease, which didn’t feel great. Needless to say, the appointment deteriorated. “If you can’t meet my needs, I think we are done here,” is how Reczkowski left it.

Reczkowski ultimately made his way to Community Health Programs, where he connected with Dr. Stoepker, who relocated from New York City in June to join the primary care team at CHP’s Lee Family Practice. In addition to a prescription for PrEP, Reckowski got the most up-to-date information about the HPV vaccine, previously available only for those under 27 years of age. Stoepker knew that the FDA had just approved the vaccine for anyone under the age of 45, and “he listened to me, he didn’t lecture me and wasn’t interested in giving advice for someone else — he was really interested in me,” which, Reczkowski feels, really speaks to the vision of CHP: It values an inclusive culture that champions patient-centered care. “I feel like that is exactly what I experienced,” he said. “Exceptional, compassionate health care.”

The Williams Institute at the UCLA School of Law says about 4.5 percent of U.S. adults — 11 million people — identify as LGBT; about 1.4 million people identify as transgender. Massachusetts law explicitly prohibits discrimination based on gender identity, sexual orientation and HIV status. But as Garnett puts it, “there is friendly, and there is competent. If [a doctor] is not putting out that they are [trans] friendly, I’m not even going to call or show up,” he explained. And Stoepker understands this. “Not getting up-to-date care is [a persistent problem] in all arenas: If it only affects 10 percent of the population, there are going to be some doctors who are up to speed and some doctors who aren’t,” he said. He calls this one of the big problems with medicine. “Once you have that end of residency, the training requirements are incredibly flexible; what you do to educate yourself as a physician is highly variable,” he said. While LGBTQ-specific training and separate clinics specifically dedicated to providing quality care to those who identify as LGBTQ are being incorporated into medical schools and residencies, there is an underlying truth: “It’s going to be a generation of physicians before it’s truly a frame shift,” Stoepker said.

From Reczkowski’s perspective, it boils down to education. “Cultural competency training [is necessary] so we can understand how other people perceive the world and how we can best interact [and] live together; this is what the medical institutions need to be doing as well,” he said. In fact it is imperative at the doctor’s office. In a separate incident with a different provider, Reczkowski ran into trouble with regard to a prostate exam, one of which could be done in the office, rendering it immediate and not very expensive, while the other had expensive lab costs associated with it. Reczkowski’s doctor was so uncomfortable, he would not do the prostate exam. “It is [the doctor’s] job to make me feel comfortable about something that can be awkward; now you are making me feel more awkward because you feel uncomfortable and don’t have the cultural competency to understand [my position]?”

This is part of the ongoing conversation Garnett is facilitating as founder of the Berkshire County Trans Group. “I think any time a person makes an effort to say, ‘I am friendly, I am willing to learn,’ that is great.” Health care is a hot topic at monthly meetings across the county, where informal lists of recommendations abound. Dr. Stoepker currently tops this list as one of the only openly LGBTQ-supportive providers in the area. “It’s the first thing you do when you move to a new area: Who is your doctor? Who is your dentist?” Garnett said. “It’s difficult to see a new provider when you don’t really know [what you are walking into],” Garnett added, even when the issue for which you might need support is not trans- or LGBT-related. Garnett addressed the topic of labels, often seen as divisive. “The value of labels comes when they are self-chosen,’ he explained. “We choose them so we are not alone; having labels helps us find each other; it helps us to hear about someone else’s experience, and it helps us to put our own experiences in context with other people.”

This is not a local problem. Stoepker recalls his practice in New York City (he moved to the Berkshires 18 months ago but spent a year communing to the city). “Every day I was seeing a new patient who said, ‘This is New York City and it boggles my mind, but I was not getting affirming, supportive care at my PCP’s office. So I Googled around and found you,’” which is why he has worked to create a safe zone in his office by providing informed, compassionate medical care to LGBTQ patients — not individuals living with HIV or AIDS, who are under the care of specialists, rather individuals seeking good primary care. It’s what keeps him motivated in his work: “The privilege of doing what I do is amazing, and I’m excited about it every day; the ability to honor my dad’s memory, and the tradition of amazing doctors he had that I was inspired by. But mostly it’s just because, when you do something the right way and people appreciate it, it feels really good.”