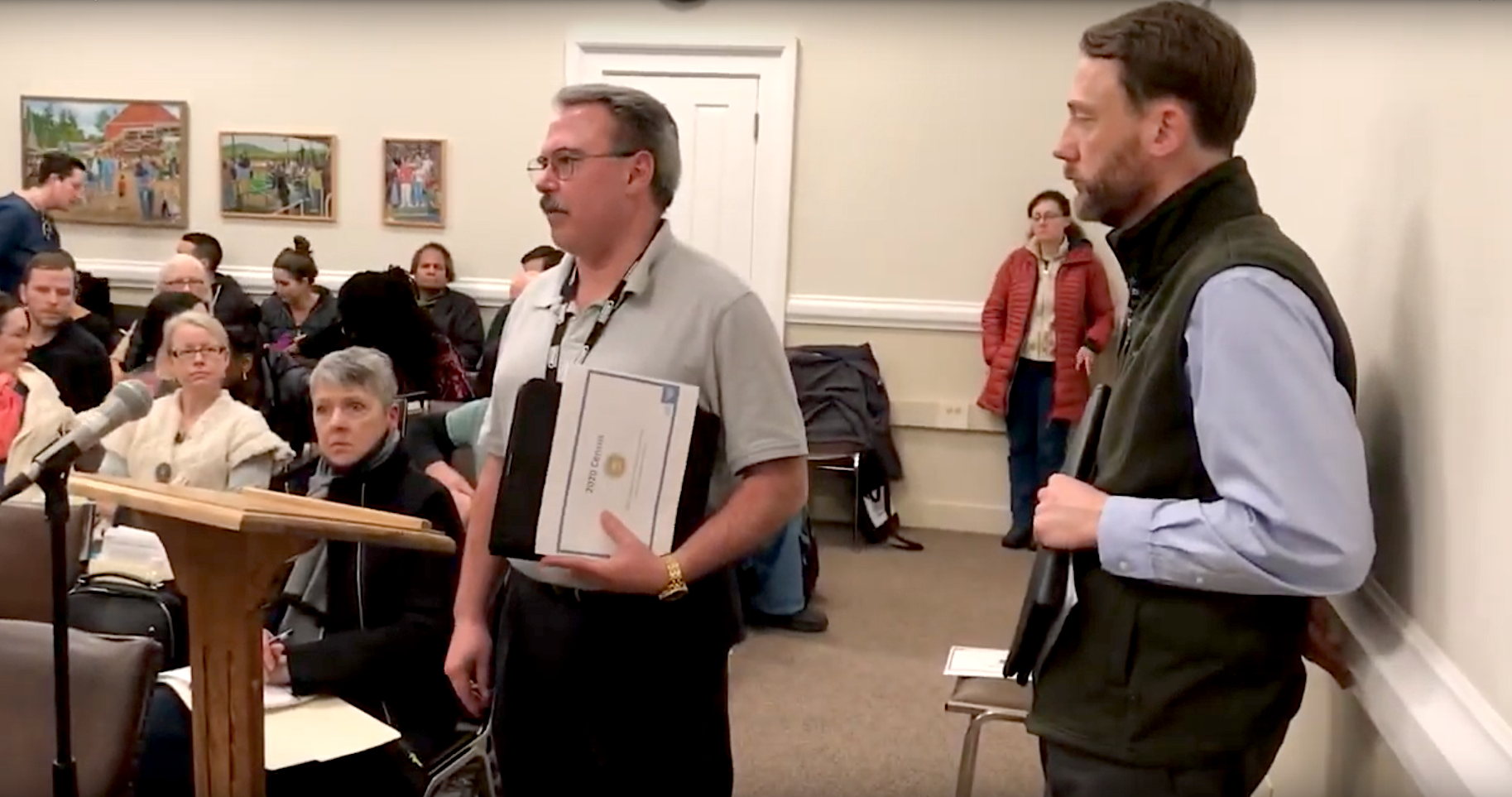 Mark Sebastino, left, a partnership specialist with the New York Regional Office of the United States Census, told the Great Barrington Selectboard Feb. 10 that the 2020 census is the measure that 'determines how $675 billion' in federal aid. At right is town planner Chris Rembold. Photo: Terry Cowgill

Great Barrington — Just how much is $675 billion? It’s more money than any individual in the world possesses. It’s also the amount of money at stake in the 2020 census.

Mark Sebastino, a partnership specialist with the New York Regional Office of the United States Census, told the selectboard Monday night that the 2020 census is the measure that “determines how $675 billion [in federal aid] is distributed on an annual basis to states and local communities for things such as Section 8 housing vouchers, WIC, SNAP, infrastructure, emergency services.”

“The list goes on and on,” Sebastino said, adding that the census also determines how many members of the House of Representatives each state has. “Think about power: it’s our voice in Congress.”

See video below of Mark Sebastino, a partnership specialist with the New York Regional Office of the United States Census, explaining the census to the Great Barrington Selectboard:

It’s a little-known fact that the census is actually mandated by Article 1, Section 2 of the United States Constitution. It is conducted each decade in years ending with zero. In addition to determining the number of seats each state has in the House of Representatives, the census defines congressional and state legislative districts, school districts and voting precincts. And it also provides valuable data to government, businesses and nonprofits for planning purposes.

Some people are reluctant to participate. Indeed, Sebastino said the estimated nonresponse rate for Great Barrington is projected to be 21.5 percent. Some people simply don’t care or are apathetic. Others, however, are concerned about their privacy.

Sebastino emphasized that all responses are protected by Title 13 of the federal code, which prohibits the Census Bureau from sharing personal information with any other government agency or court. Violation of Title 13 is a federal crime punishable by up to five years in prison and a fine of up to $250,000, or both. Census workers are sworn for life to uphold the law and to protect the confidentiality of collected data.

“No matter what it is, the data cannot be shared with any other government agency or court,” Sebastino explained. “That includes law enforcement agencies: DHS, ICE, CIA, FBI. Nobody can have access to the data. They can have access to all the statistical data there is, but not the personal data.”

Sebastino said motivating people to respond to inquiries is perhaps the most daunting part of a census worker’s job.

“We have to count 330 million people and get them to respond, which is the tough part,” Sebastino said. “That’s where partners come into play.”

Sebastino has been working with town planner Chris Rembold and visiting places around town such as the Claire Teague Senior Center, where he and state Rep. William “Smitty” Pignatelli, D-Lenox, met with seniors recently to explain the importance of participation in the census.

Sebastino cited the formation by the Berkshire Regional Planning Commission of a Berkshire County complete count committee comprised of key partners who work to motivate residents to respond.

Next month, residents will receive an invitation in the mail to participate. They can respond by filling out a paper form, by phone, online or through a visit by a census taker. In addition to English, services will be available in 12 other languages.

Selectboard member Kate Burke asked Sebastino if the Census Bureau counts the segment of the town’s “population that is homeless, living in cars, living in hotels.” He said every effort will be made to include them.

“I’ve been reaching out to local organizations to identify where those locations are so that Census Bureau employees can go out,” Sebastino explained. “They won’t take their names or anything. They won’t bother them. They won’t wake them up. They’ll just count physical bodies.”

“We are really trying to canvas all aspects of the county to ensure as complete a count as possible,” Rembold said, adding that a nonresponse rate of 21.5 percent for Great Barrington would be “completely unacceptable.”

Most states in New England and in the northeast have been either stagnant or steadily losing population, as others to our south and west are growing. The New England state most likely to lose a congressional seat after the 2020 census is Rhode Island. Massachusetts lost one of its 10 seats after the 2010 census but is not expected to do so this time.