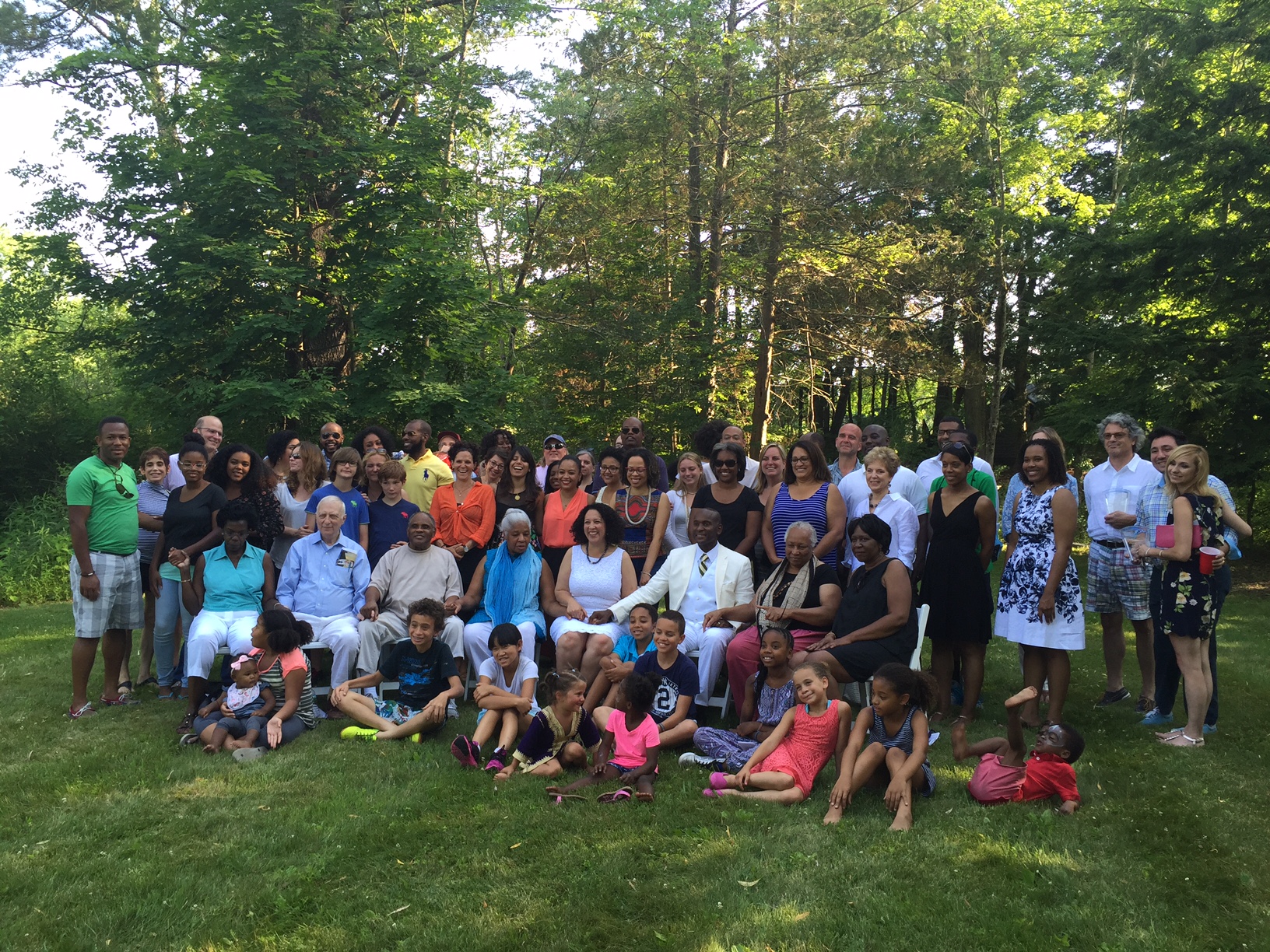 Great Barrington — As hard as it was, and still is, to be a black man in America, James Weldon Johnson also faced the same snares and struggles of artists everywhere: finding the peace and inspiration­­ –– often only what nature can provide­­ –– to create.

It is why this prolific songwriter, poet, a founder of the Harlem Renaissance, lawyer, diplomat and early civil rights leader, bought a house on the Alford Brook here in 1926.

And on his way from the house to the cabin where he would write his autobiography, Along This Way, and God’s Trombones, a book of devotional poems in the style of African American preachers, Johnson crossed the same stretch of lawn, where on a recent June evening, guests sat listening to a 1935 recording of Johnson reading the first poem in that book, The Creation. University of Pennsylvania doctoral student Chris Mustazza explained it was recorded at Columbia University in a “lab meant for studying dialects.” This recording, as well as others by Johnson, can be found on the PennSound website.

Johnson, who wrote the lyrics to 200 popular songs, was born in Jacksonville, Florida in 1871. His talents also found expression in education and journalism.

Most Great Barrington visitors and residents who pass Johnson’s former house on Alford Road have no idea who Johnson was, or the works he produced, or that some of them were created in a tiny one-room cabin set up over a turn in the brook. But Rufus and Jill Rosenberg Jones are changing that. After buying Johnson’s home and property in 2011, the Jones’ began to establish the legacy last year, and at a second event on June 25, announced progress had been made, that they had created the not for profit James Weldon Johnson Literary Foundation in support of the performing arts, fine arts, and historic preservation. The Jones’ also hope to fix the cabin, badly in need of repairs and preservation work.

Johnson’s busy life in the practical world included a peaceful warriorship against racism and discrimination in the early part of the 20th century. This man needed the soothing truths in nature, and he found them at the property he named Five Acres.

“It is hard work to write,” Jill Jones told her guests, the number of whom had grown since last summer’s inaugural party. “He came here to revive, to breath this delicious air, to listen to this brook, to create,” Jones said. Jones said a “goal” of the Foundation is that this property will “continue to be a place of creation.”

Jones also said Johnson was “woefully under-recognized for his contributions.” Not many realize that it was Johnson who, in 1900 wrote a spiritual precious to African Americans everywhere, “the black national anthem,” Lift Every Voice and Sing.

After drinks, and ice cream from the SoCo Creamery cart on the lawn, there was a program under a tent next to the brook.

Brooklyn, New York-based artist Dan Hibbert spoke of how he had transmuted Johnson’s poems in God’s Trombones into paintings. He received one of the first awards from the Foundation for this work. When he was a child, his father, also an artist, Hibbert said, used to read those very poems to him. As his rendering of The Creation was unveiled, Hibbert said he tried to “tell the story of creation through color and texture.” He said he had listened “over and over” to the recording of Johnson “to get the spirit.”

And he recalled his father once scooping up a clump of red clay and molding it for Hibbert as he read from The Creation.

Rufus Jones read an excerpt from it. “Then God sat down ­­–– On the side of a hill where he could think.”

“How many places can you write these words and believe them?” Jones said. He then read from Johnson’s autobiography, where Johnson describes the Alford brook as a “bright little river,” and when he had found the house said, “this is just the place for me.”

“The sun on his right, the moon was on his left,” Jones said gesturing towards some of the inspiration for The Creation.

After a visit up to the cabin, candles were lit at long tables while children splashed in the brook. It was time for dinner, speeches and music.

Along with Hibbert and Mustazza, self-taught poet and painter Tom Warner had earlier been given the first award from the Foundation. Warner grew up down the road, and as a child played in and around Johnson’s cabin. His grandfather was close to Johnson and his wife Grace Nail Johnson. Johnson’s writing desk was eventually handed down to Warner, who wrote his first poems at it, then later gave it to his daughter, now the children’s librarian at Mason Library. Warner got to know the Jones’ right after they bought the place.

“People don’t realize how close this property was from being destroyed,” he said, noting his mother had instilled in her children a “reverence” for Johnson’s cabin, since Warner and his siblings often ran around all over the property. Warner’s painting of Johnson’s cabin resides at Emory University’s James Weldon Johnson’s Institute for the Study of Race and Difference.

SUNY Purchase jazz studies professor and Pound Ridge Community Church music director Pete Malinverni also received an award for turning The Creation into a choral, dance and jazz piece, with choreography by Kevin Wynn, and featuring the Purchase Soul Voices. A recording of the work was shown later that evening, after Rufus Jones and his father, Rufus Jones Sr., tore into the night with the blues, the younger Jones on guitar, the elder at the mic.

UMass Amherst History professor David Glassberg is a W.E.B. Du Bois scholar who said he studied the correspondence between the two men at a time when “the color line was no mere myth.” Earlier in the day Glassberg had given a tour of the Du Bois Homesite, just down the road on Route 23.

Manhattan-based artist Selwyn Garraway, who said he had been active in a historic preservation project in his neighborhood, said he wants to contribute to the legacy by applying to the town for a historic marker for the property. He would begin that process right away, he said, so that by next summer’s celebration, a marker might be in place.

Ideas of how to expand the legacy continue to pour in, the Jones’ say. It has already grown over the past year, like the tree planted by children at last years’ celebration, while everyone sang Lift Every Voice and Sing. Another was planted on this evening, the song sung again, with the intent that the words and contemplation of Johnson’s work spill out into the world from his small creative haven here in Great Barrington.

Johnson was also leader of the National Association for the Advancement of Colored People (NAACP) after he began working for the organization in 1917. Tom Warner spoke to this; it is hard not to feel Johnson’s memory resonates with all, and for all time.

“James Weldon Johnson carried a sword of justice with a pen and diplomacy,” Warner said.