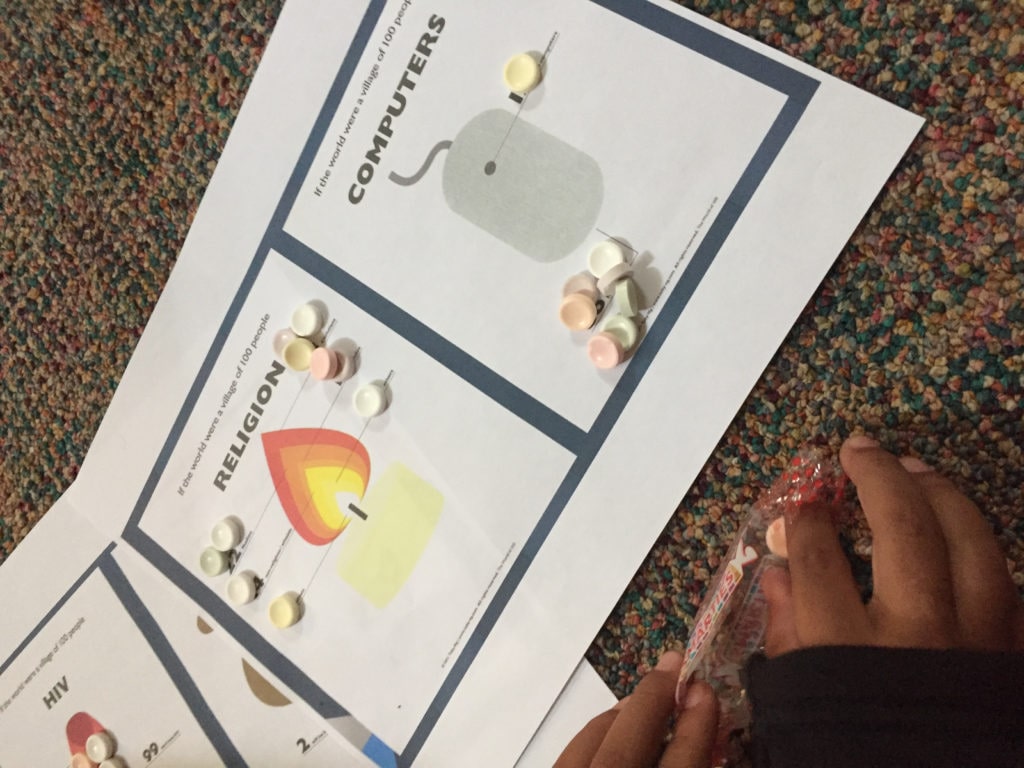 Hannah Van Sickle
A child participates in an exercise as part of Multicultural BRIDGE's Happiness Toolbox summer program at the First Congregational Church of Great Barrington.

Great Barrington — If we are what we eat, then the 29 young people I met on Thursday morning at the First Congregational Church are Smarties (you know those pastel colored sweet-tart candies in the clear cellophane wrapper?) With morning circle hinging on the sweet treats, Gwendolyn VanSant’s audience was not surprisingly calm and attentive: “If the world were a village of 100 people, did you know there would be 61 Asians? Ten Europeans? Thirteen people from North and South America? One person from Oceania? And 14 Africans?” she shared with the group, most of whom were relaxing on blankets or reclining on yoga mats scattered about the space. The seemingly simple exercise—one that hinges on math and teamwork—paints an effective picture of the world in miniature form, one that children are readily able to consume—literally. The exercise is also part of the 2019 BRIDGE Happiness Toolbox/Real Talk program, which will celebrate its 10th anniversary with a community open house Friday, Aug. 16. 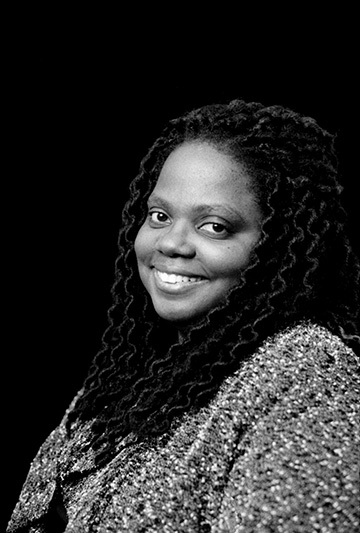 “At the end of circle, you can eat your Smarties, but you can’t eat them yet!” was the instruction from VanSant, who, in her role as CEO and co-founding director of Multicultural BRIDGE, is at the helm of the evidence-based program steeped in positive education designed to engage diverse students to support their success and cultivate their resilience in school, family and community. The core curriculum, developed by Gwendolyn VanSant and JV VanSant, explores positive psychology, diversity, mindfulness and the importance of play. “What we try to accomplish is building the kids’ capacity to understand diversity . . . all in the light of learning how to navigate it, understand their own scenarios, and be good bystanders and friends in the community,” said VanSant in a recent phone interview. The seeds for this program, planted during VanSant’s Capstone project, have blossomed into a curriculum overhaul, one that revolves around an infusion of positive psychology.

Case in point? Using the candy to enhance math skills. “I want to eat these sooooo badly,” said one student, before settling into the task at hand: first rounding the newly gleaned statistics up or down to the nearest whole number, then converting that figure to a percent with each candy disc representing 10 percent. I worked with a pair of girls, one Hummingbird (age 8 and younger) and one Dragonfly (age 9 and older), on a worksheet detailing religion and computer access among the world’s population. We learned, for instance, that 12 percent of the world’s population owns a computer and 88 percent does not. The girls, working together, decided that 12 percent rounded down to 10 percent, a figure represented by a single piece of candy; and 88 percent rounded up to 90 percent, a figure represented by nine pieces of candy.

“Give me a thumbs up if that was fun math!” VanSant asked of the group once they finished their worksheets. And in the face of temptation, the children were incredibly restrained. “Now can we eat the Smarties?” one child inquired, to which the answer was “not yet.” A group debriefing ensued, with various participants being called on to share their findings: one young person volunteered, “82 percent of the world has access to clean water and 18 percent don’t. That is eight and two Smarties.” They then moved onto food: “Five out of 10 people don’t have enough food,” one person shared, to which the entire group, in unison, chimed “that’s half!” VanSant was at the ready: “You all were working on fractions, math and diversity,” she said, in a nod to the program’s focus on promoting cultural and multilingual literacy for children of all backgrounds.

“Can we eat them yet?” someone asked before VanSant delivered the sweetest news of the morning: “You are a partnership, [so] put [your Smarties] together, then divide them in half, and either eat them or save them for later,” she said as the audible crinkling of cellophane wrappers filled the air momentarily. 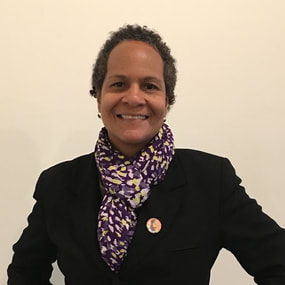 “Our goal is always to have as many kids participate who will not be exposed to other [summer] programs,” VanSant explained. The program, over the course of its decade-long tenure, has bounced around South County, beginning at the former Housatonic Elementary School to the Norman Rockwell Museum, the Guthrie Center and Hevreh. This summer’s location, in downtown Great Barrington, has been exciting for two main reasons: the students have been studying W.E.B. Du Bois in Happiness Toolbox lead educator Stephanie Wright’s “Berkshire Legends” class, and the downtown location has provided ample opportunity to explore the haunts where Du Bois himself once walked; second, several of the program’s earliest participants have returned to take on major leadership roles in the program. VanSant calls it “a really exciting moment,” noting, “many kids are taking on things they are passionate about and helping to teach and to lead.”

The 2019 Summer Program will build on ongoing Happiness Toolbox themes of Mindfulness, Character Strengths, Diversity Leadership, Growth Mindset, and the rich History and Heritage of Berkshire County. Activities include workshops in dance, Spanish and sports led by the program’s five “helpers”; in addition, various special guests—including Ty Allan Jackson of Bighead Books, A.J. Enchill of Sen. Adam Hinds’ office and student athletes from Youth, Education and Sports (YES)—joined in on the fun. There were also two field trips to Gideon’s Garden on Division Street to learn about the importance of growing food and knowing where it comes from. This year’s languages were Spanish and computer coding, with additional opportunities for art-making, natural science, dance and collaborative games.

From math, the group segued to a paired exercise around the topic of consent. “We’re trying to make it intentional, not to hit them over the head with these ideas,” said VanSant, who cued the students to remember that consent boils down to how you greet your neighbor when s/he arrives in the morning: “Do you want a hug? Do you want a handshake? Do you want a dab?” For this group of kids, ranging in age from 6 to 15, the concepts seemed to click, and quickly.

“This whole entire program is teaching you how to get along,” VanSant began. “It’s called social intelligence [and it’s about] how to build community together, how to build family together, and [how to have] empathy [for one another]. Today you did an activity about diversity and privilege—what people in the world have access to and what they don’t. All of this is building social intelligence,” she explained before students moved on to learning about recognizing and building character strengths. The three being focused on Thursday morning were Appreciation, Honesty and Integrity. Detailed explanations of each followed. “Appreciation means you appreciate things that are beautiful and pretty, like nature, and you connect with it,” explained Damariana Taylor, assistant Summer Program coordinator. “You take time to be creative and make things really nice,” she added. Taylor continued, “honesty is pretty much just telling the truth; by telling the truth we can make sure everyone feels welcome and comfortable and safe,” she explained before VanSant chimed in: “Integrity connects to honesty. Integrity is about how honest you can be even when no one is looking. For instance, did any of you eat the Smarties before I said you could?” she asked, as a few giggles erupted. And then in a flurry of motion the students—of all colors, speaking both English and Spanish—quickly scattered to choose a sticker.

Note: On Thursday, Aug. 15, from 5 to 7 p.m., the Parent Engagement and 10-Year Anniversary Celebration will take place at the First Congregational Church. It will be an opportunity for students to showcase and present what they have learned and created over the two-week session, and to celebrate the Happiness Toolbox’s 10th year. The public is invited to attend.

— Gae Elfenbein
Read next: Eagle Mill wants larger hotel across street; site plan could go back to drawing board