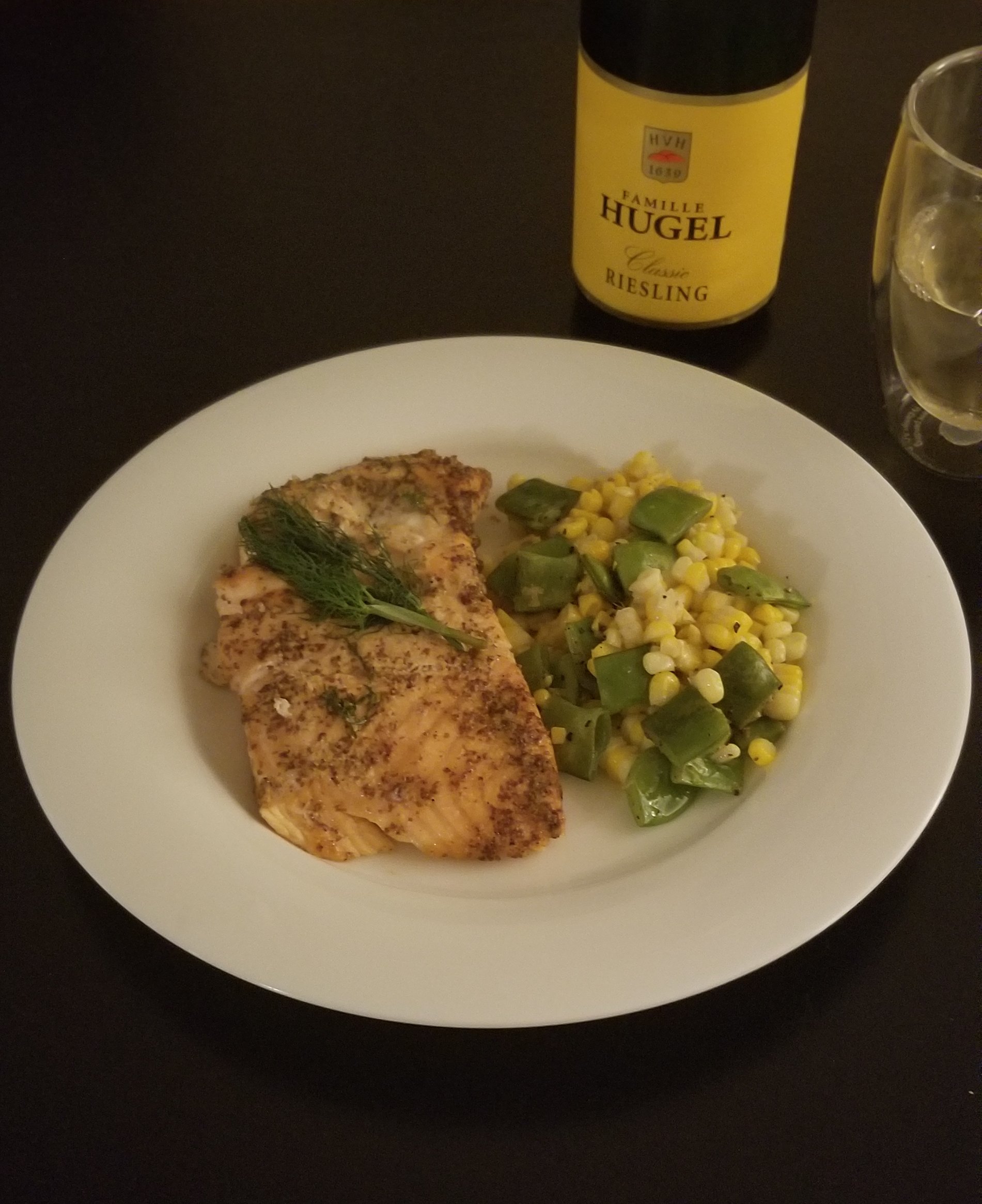 Late summer/early fall is prime grilling season for me. I don’t do well with heat, and this summer, we’ve had more than our usual number of days of hot and humid weather. Just the thought of standing over a hot grill during those days makes me sweat. I’d like to share a method for cooking salmon for a reasonably quick, delicious meal off the grill, which I prepared on a cooler evening recently.

In 2004, I was visiting my daughter and son-in-law, who had moved to Washington, D.C., after my son-in-law had taken a job as a registrar/manager at the Smithsonian Institute. Always finding new places for us to eat in the city and environs, they wanted to take me to a café that had recently opened, located in the Smithsonian’s American Indian Museum. The café is called Mitsitam, meaning “let’s eat” in English. Never having been particularly impressed with museum café food, I was a bit skeptical, but I trusted their taste and I was interested in the museum anyway. I was pleasantly impressed by the overall quality of the food, and it was there I first experienced cedar-planked salmon.

The café is setup by stations representing different Native American regions. I chose my main course from the Pacific Northwest, as I was intrigued by the listing of cedar-planked salmon on the menu. The dish involved making a glaze for the salmon from various berries and blended with ground juniper berries. The glazed salmon was then placed on a cedar plank that had been thoroughly soaked in water. The planked salmon was then roasted directly over coals. It was delicious!

I’ve used this technique a number of times over the years using different glazes. The salmon picks up a subtle sweet smokiness from the cedar, and the wood’s insulating properties help keep the salmon moist while being roasted directly over medium hot coals for about 15-20 minutes. Having used various glazes over the years, I’d like to share one I used recently that can be put together quickly, especially when you feel like grilling and are somewhat short on time. On this night, I used dill as the herb, but rosemary works well, too.

As a side dish, I made a sauté of corn and Italian flat beans inspired by Chris Masiero, owner of Guido’s Fresh Marketplace. The sauté is straightforward, involving Italian flat beans cut into approximately half-inch pieces and sautéed with fresh corn off the cob in butter. Use your favorite method of cooking corn on the cob — I have about as much desire to get into the strangely emotionally charged best method of cooking corn on the cob as I do to have an ultimately pointless online political argument with a friend of a friend of a friend.

After cooking the corn on the cob, chill the corn thoroughly and with a chef’s knife, cut the kernels from the cob, holding the cob perpendicular to the cutting board. This can all be done a day ahead if it’s more convenient and is a great way to use leftover corn on the cob using any number of different vegetables, herbs, spices or just on its own. It may be just me, but I’ve discovered it’s virtually impossible to keep corn kernels from flying all over the counter and the floor when stripping the kernels from the cob if the corn isn’t cooked and chilled thoroughly first.

I’d found when I didn’t cook and chill the corn first and as much as I cleaned, the lady of the house was sure to find errant kernels hiding someplace. However, she’s learned to accept my brand of selective blindness as one my shortcomings, as I do the cooking and she still finds me reasonably entertaining otherwise.

Cedar planks can be found in stores with well-stocked grilling sections or online. Have a spray water bottle handy if, on the off chance, the plank starts to smolder. It helps to have a long-handled spatula and tongs with a sheet pan or platter handy. Sometimes the plank will stick to the grill even when oiling the grill beforehand, which the combination of the spatula and tongs can free. The sheet pan or platter is for transferring the planked salmon to the counter or table.

Serving the salmon directly from the plank at the table is a cool presentation but, especially if it’s a casual weeknight meal, may be totally unnecessary.