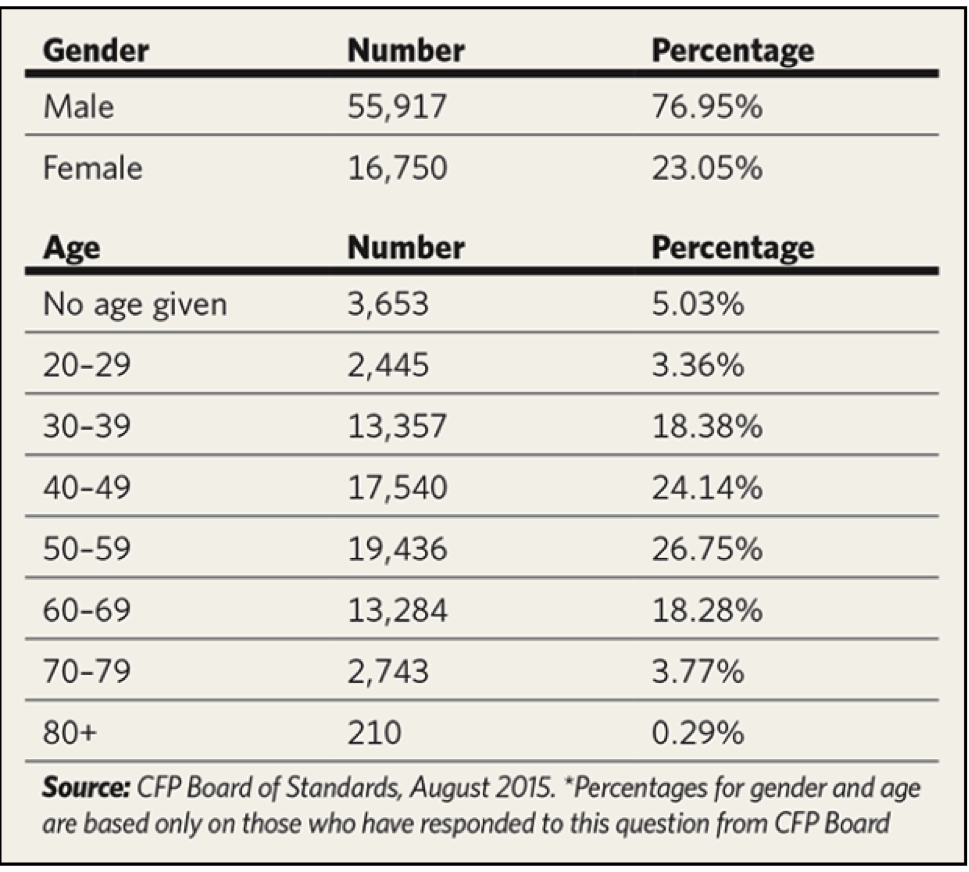 CAPITAL IDEAS: Your husband has a kept woman

Dalton — Your husband has a kept woman. And it’s you. Kept in the dark, that is. According to a UBS study, “women put financial security at risk by deferring long-term financial decisions to spouses.” I’ve seen my own version of this. Key findings from the report state that:

Even when both husband and wife come to a meeting, we know that many advisors will allow the husbands to dominate the conversation. Others will meet with just the husbands. My entire industry has been complicit in holding women back. Most advisors limit their skill set to only investment returns and keep any real meaning out of the conversation.

But hold on, ladies. Financial advisors aren’t taking all the blame here. Before I point the finger squarely at you, I will say that your husbands are enablers—or worse: culprits. At my firm, Berkshire Money Management, we’ve seen this. And we’ve, quite frankly, pissed off some of our male clients. We’ve cancelled meetings on them when they’ve showed up without their wives (whose money, mind you, we’re also managing). And in other instances, we’ve completely circumvented alpha males who are trying to keep their wives out of the financial dialogue and scheduled get-togethers with the wives alone. Note that I said “get-together” and not “meeting.” Hey, I get it. Some people don’t want to talk shop. That includes guys, whose “meetings” are more about talking about how they are expanding their business or what the grandkids are doing or some other stuff that just isn’t about money at all. That’s fine. That’s not uncommon at all. It’s not as if we’re kidnapping people and forcing financial education down their throats. Sometimes the wife is glad to get an update from us instead of a loving-yet-incomplete husbandly response like “we’re all set; don’t you worry about it.” Sometimes it’s just a fireplace chat so they know they can reach out to us if they have questions or concerns. Just as often as not, the wife knows as much, if not more, about business and the markets, and she wants to be part of the conversation but has found that the husband assumed that gender role. For me, I think the most important thing is that, with the husband, the conversation is something like, “we got a 6 percent return, why didn’t we get 8%.” With women, we have an opportunity to put way more meaning behind those numbers.

With guys, sometimes I see a bit of this in myself when I’m buying a car. I don’t know a thing about cars, and I don’t want to know a thing. My grandfather was a mechanic and my uncle still owns a local shop. I don’t need to know and I don’t want to know—not now, not ever. But when I go car shopping and the salesman is talking to me about drive-chain-torque-flux-capacitors or whatever, I nod and smile like I know what they’re talking about, try not to look too much like an easy target, and ask a question or two that makes me seem more “manly” than I actually am. I see this in some gentlemen when they come in to talk to me as prospective clients. When the conversation turns to the soft side, about applying financial planning in a manner to protect what they care about—the meaning behind the numbers—men can’t relate to that type of conversation. It’s their version of me feeling intimidated by the car salesmen. So, they talk about investment returns. It’s the only tool, they think, in their tool bag. But we’ve got a whole workshop of tools they don’t even know about, and we can use them to try and secure a client’s needs, wants and wishes.

Women get that. They understand that the size of the portfolio is just one tool in the toolbox, and that it is a means to an end and not a scorecard. There have been instances when something was very important to the wife, but it was never brought up—not once—by the husband, sometimes because the wife didn’t feel like she had the opportunity to have that conversation with the husband. Other times she did speak up to the husband but the husband didn’t bring it up to the advisor, either, because he didn’t think it was something worth talking about or because they didn’t think the advisor had the tools to address it. I tell you, guys, sometimes you’re right: We can’t fix it. But it doesn’t mean you shouldn’t talk about it with your financial advisor, with your wife.

In last week’s column, we discussed that the chairman of the Federal Reserve Board, Jay Powell, would be testifying in front of Congress. I wrote that he “will have a chance to artfully walk back his statements” practically announcing a rate cut at the Fed’s July 31 meeting. He did not take that opportunity. Instead, he noted several times the “uncertainty” of foreign economic growth and his concern about low inflation. The Fed’s target for inflation is 2 percent. Its preferred measure of inflation, the Personal Consumption Expenditure price index, has been running under that level since the Fed announced it as its preferred inflation benchmark about seven years ago. The Fed had explained that away by calling the factors pulling down the inflation rate as “transitory.” However, it’s come to believe that low inflation has become more permanent, and that concerns it. Most of us, of course, prefer lower prices. However, businesses and consumers treat purchases differently when inflation is low, as they factor that into their decisions. Wages remain lower than they otherwise might due to a lack of pressure, and neither businesses nor consumers feel compelled to buy now if prices aren’t rising or may even be cheaper in the future. Once those expectations become part of the buyer’s mindset, as we saw in Japan and other deflationary economies, it’s nearly impossible to dislodge that way of thinking. Mr. Powell testified that, “you don’t want to get behind the curve and let inflation drop below 2 percent.” Ironically, the argument could be that by not dropping rates now, inflation could further weaken and then rates would have to be dropped even more to stimulate purchasing.

As of right now, the federal funds futures implies a 100 percent probability in the federal funds futures rates that there will be a cut on July 31, a 74 percent chance of a one-quarter-percent cut, and a 26 percent chance of a half-point cut. If we don’t get a rate cut, I’d expect a 9–12 percent correction lasting about two to three months. If we do get it, we’ll probably enjoy a mundane summer of price consolidation.

More fuel for the fire

A couple columns ago, I said that I expected to remain invested in the stock market for the rest of the year; while I do not expect outsized returns in the second half of 2019, any correction is likely to be temporary and brief. An interest rate cut will probably be the Duraflame log tossed onto the fire just at the right time to rekindle a dimming flame. The market is a bit ahead of itself right now. In May, the stock market corrected nearly 7 percent over a month and nobody remembers it. After a July rate cut, I would not be surprised if the stock market did something similar but softer over the summer. The timing would come just at the right moment for the “buy the rumor, sell the news” cliché to be used as the reason for a correction. Whatever the reason, it would be right in line with what we would expect after the 19 percent crash in December 2018.

The rally we’ve seen off the Christmas Eve 2018 lows has been consistent with previous “near-bear” and bear markets (a bear market being defined as a 20% drop in stock prices). The market’s one-year chart patterns following those type of drops have been textbook. If we continue to follow the consolidated pattern of those previous periods, that would mean very little headway for the next few months (just in time for the summer swoon we often expect), then a solid final three months of the 12 months following near-bears and bear markets (just in time for the seasonal year-end rally).

There were 25 instances of the market bottoming after a greater-than 20 percent decline, and they mostly support what we’ve seen for the “near-bears” of a greater than 10 percent but less than a 20 percent drop. 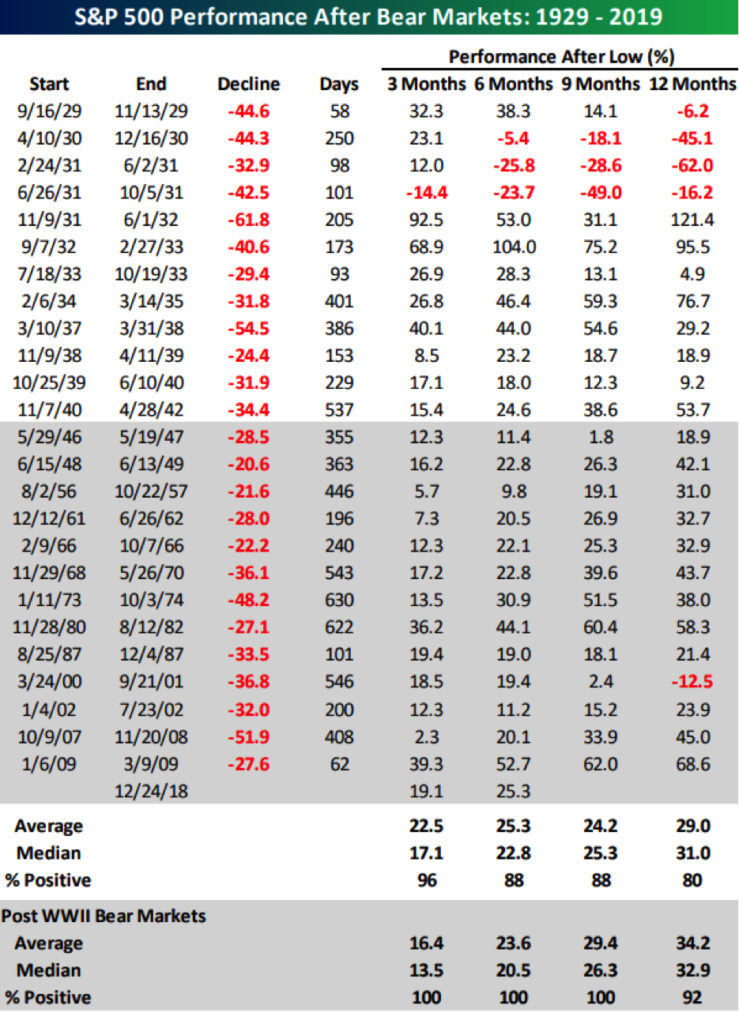 The only meaningful difference between the 12 months following near-bears versus bears (especially post-World War II) is that there is an extra bit of weakness for us to expect this summer. The historical statistics support my earlier prediction that the rest of the year will be a relatively safe time period to remain invested.

But after that, look out below! The Fed is, as they say, spiking the punch bowl. And it had better spike it hard if it wants the stock market to stay up. The gift of lower rates in an environment already rife with liquidity has us investors seemingly forgetting that second-quarter earnings are just now starting to roll out. According to FactSet, analysts predict that second-quarter earnings of S&P 500 companies will contract 3 percent from a year earlier, which would be the biggest decline since the second quarter of 2016. (Currently, third-quarter earnings are expected to be down 0.9 percent; they fell 0.4 percent in the first quarter of 2019.) That earnings weakness in 2016 didn’t lead to a huge correction, something in the garden-variety neighborhood of 9 percent. But a stock market hitting new highs while earnings are lower and economic growth data is decelerating smacks of prices being inflated from interest rate hopes. It’s not a tool the Fed uses often, spiking the punch bowl when the party is still hopping. It used it in 1927, and that worked until 1929—you know, before the Great Depression. And it worked in 1998, leading to a tremendous 1999 for the stock market, right up until it got cut in half. Too much spiked punch leads to one heck of a hangover. But until the party is over, I’m not going to fight the tape or the Fed.

— Sappho
Read next: The Lolita Express vs. Team USA Express