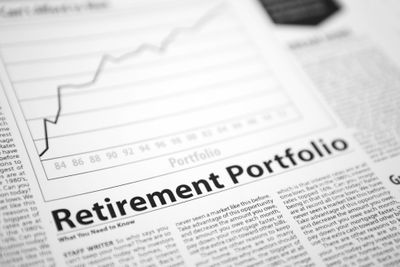 Dalton — What’s your number? I know you’ve thought about it—the size of the investment portfolio you’ll need to feel comfortable retiring. According to a recent Charles Schwab survey of 1,000 401(k) plan participants nationwide, the number is $1.7 million. Here is where I’m supposed to tell you what you already know—that if you start investing about 10 to 15% of your salary when you’re in your 20s, you’ve got a good shot at hitting that number. Thank you, compound interest. But if you wait until you are my age, mid-40s, then you’ll have to save about one-third of your income to have a good shot at hitting that number. Blah, blah, blah. You’ve read that a hundred times. Let’s talk about what people don’t know: that they have absolutely no idea if that number, their number, is the right number.

According to the Employee Benefit Research Institute, currently 67% of workers are “very” or “somewhat” confident that they’ll be able to live comfortably in retirement. That’s a high number; they are probably feeling confident because of a good economy and a 10-year bull market in stocks. Their optimism is probably misguided, but I’m happy for them. Ignorance, as they say, is bliss. In that same EBRI study, it was found that only 42% of those same workers have done any sort of retirement calculations (even including those free online tools that offer a rule-of-thumb assessment), and fewer than one-third even looked into how much medical expenses might be in retirement. (FYI: According to the Fidelity Retiree Health Care Cost Estimate, an average retired couple aged 65 in 2019 may need approximately $285,000, after tax, to cover health care expenses in retirement). There is a wild disconnect between the confidence of near-retirees and accurate retirement need calculations.

Perhaps that disconnect is why you see another Fidelity study citing a similar number of people (62%) confident about their current financial status, but the majority of them are not confident about their future. That report reveals that only 18% of respondents had a comprehensive written plan for retirement. I’m not surprised. And it’s not the fault of the people who don’t have plans.

A couple weeks ago, I had a visit at my office from an area private equity firm. It was a polite conversation that was mostly dominated by him explaining what they do and how they do it. He, at one point, apologized for doing all the talking but explained that he was familiar with my firm’s business model and that he had fired his previous financial advisor years ago because it was cheaper to just buy index funds. I completely agreed with the idea that it’s cheaper to just buy index funds, but I had to (in a very gentlemanly fashion) take him to town on his idea of our business model. I’m not going to delve into what Berkshire Money Management does. But I will point out that this was a private equity guy: He’s supposed to know there are differences in firms and that the business models of any industry will evolve over time. He should have known that his financial advisor was just out of touch with the way the industry had changed and that skill sets had been amplified to meet new service lines. I mean, if HE didn’t get it, how is the average person supposed to know?

I don’t blame the pre-retirees for not having written comprehensive plans. I blame us: I blame the wealth management industry. We are all aware that it’s difficult to talk about your finances, especially with a stranger. Sure, we feel vulnerable, but we humans are also prone to sticking our heads in the sand when it comes to addressing our potential failures. A financial study by the industry self-governing body FINRA found that 53% of all respondents report that thinking about their finances made them anxious; 44% said discussing their finances was stressful. The other half probably either lied or have no idea what a conversation about retirement preparedness looks like—if the “right” questions are asked to determine readiness, there is a lot of discovery about your failures.

If you feel as if your financial advisor is getting a little too personal for your comfort, don’t resist her; it’s not some new-age, hippie-dippie stuff. She is trying to help you plan in a way that you’re just not familiar with yet.

The Fed’s impact on the stock market

A couple weeks ago, I wrote that the rest of the year will be fairly safe for stock market investors and while I am not ready to bet big on outsized gains for the rest of the year, “I suspect any correction in the stock market will be temporary, and brief.” I am confident in my assessment of safety. Essentially, recession or no in 2020, I don’t think the stock market really begins to price it in during 2019. But, yeah, there will probably be a correction. There are always corrections. It sucks, but that’s life in the stock market. I am fighting history to suggest that the stock market won’t have outsized gains in the second half of the year. For the first six months of the year, the S&P 500 rallied some 17%. Of the 20 times the S&P 500 has rallied more than 10% in the first six months of the year, the index has been up an average of 7.5% in the final six months. Now that is an outsized return—it’s essentially one year’s worth of returns in half the time. The problem is that this was the 10th time in the past seven decades that the market gained more than 15% in the first half. That’s a bit too outsized, and it would be prudent to look out for a reversion to the mean. The previous times the market gained more than 15% in the first half, a reversion to the mean is exactly what you saw, with an average correction of 12.1%.

The trigger for the next correction? I think that the stock market is expecting too many interest rate cuts by the Fed this year, and assigning far too much certainty to a cut at its July 31 meeting. Currently the Fed fund futures market is ascribing a 100% probability that rates will be cut in July. (Also, the market is forgetting that so many cuts would likely mean deterioration in the economy, but that’s another story.) 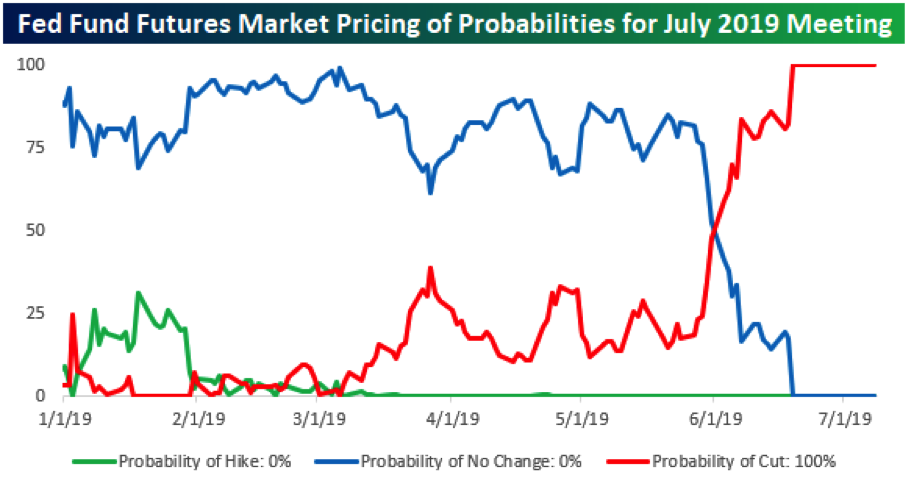 The more I re-read the minutes of the Federal Reserve’s meeting from June, the more I think it’s signaling it will cut rates in July. I am uncomfortable with this because that would mean whatever happens over the next three weeks would be meaningless in the Fed’s determination. It feels a bit like the Fed has painted itself into a corner, and if it doesn’t cut rates at the end of the month, then it risks yet another communication fumble. I’m not making a prediction as to what will happen. The Fed has pretty much said it will cut rates, though Fed Chair Jay Powell will have a chance to artfully walk back his statements this week as he testifies before the House Financial Services Committee. But if the Fed doesn’t do pretty much what it said it would do—cut rates—then the stock market will be set up to correct by that aforementioned 12.1% throughout the remainder of the summer. Temporary and brief though it may be, it’s not how you and I want to spend our summer vacation.

— Dan Bellow
Read next: Solemnities and confections in Studio E: Gracing the opening of the Tanglewood Learning Institute