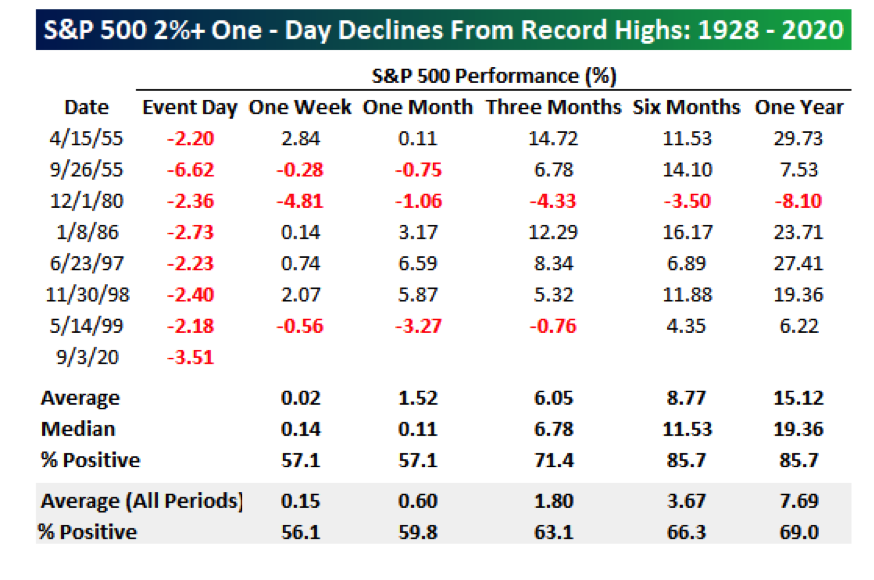 Dalton — Well, Thursday wasn’t any fun for me.

After closing at a record high on Wednesday, Sept. 2, the S&P 500 closed down -3 percent on Thursday.

It was the worst one-day decline for the index since its 5.89 percent loss on June 10, so not that long ago. However, it was the first time since 1999 when the index lost more than 2 percent after closing at a new high the day prior, and only the eighth ever instance. Previous occurrences of these 2 percent drops have happened in clusters (three in the ‘50s, two in the ‘80s, and three in the ‘90s). Will we see another one-day, 2 percent drop from a new high in the weeks or months to come? If so, it won’t be a signal to bail from the equity market.

After each of those eight prior occurrences, the return of the S&P 500 was mixed the following week and month. For the three months following those occurrences, the frequency of positive returns improved, as did the average returns.

Following these 2 percent drops, the index was positive almost every time six months and one year later. The average gains were substantial, at 8.77 percent and 15.12 percent respectively. Those average gains are double what you might typically expect from the stock market.

I wouldn’t use this information to make the case that the stock market will double its typical returns over the next six to 12 months. However, I would argue that it is solace for those wondering if last week’s significant drop, seemingly out of nowhere, is a harbinger of worse to come. History shows us that if worse is to come, last week’s one-day drop isn’t an indicator.

So far, the stock market has only had two 5 percent pullbacks since the March 2020 lows. From the lows of 1987, 2002 and 2009, there were three or four 5 percent pullbacks during the first nine months. It certainly would be normal to see another such decline in stock prices over the next few months.

For the last few months, I have given examples of how difficult COVID-19 has made it to predict economic fundamentals. We also don’t know how cities and states may react to their respective infection rates. In the absence of reliable fundamental indicators, we look toward the technicals: the charts. A simple reversion-to-the-mean analysis suggests that the S&P 500 will likely correct back to its 50-day moving average, which would be a drop of about 8 percent, down to just under 3,300 points. Once we hit that level, I suspect there would be a worse than 50/50 chance that the index would find support at around 3,218 points, for a total decline of just over 10 percent.

Through this rally, I’ve consistently said that you shouldn’t try to trade it, that you should buy into it. Given what the Fed said last week about its accommodative policy shift, I’m sticking with that advice — for now. I still have some concerns. For example, if we get to the point that I think the next fiscal stimulus package won’t be enough, maybe I’ll raise some cash.

But, for now, as I have so cavalierly stated before, corrections happen. Go for the long play, not the unpredictable, short-term play. Heck, although I didn’t write about it here, in the middle of August, I gave some pretty serious consideration to raising cash. Well, I would have looked pretty foolish since the S&P 500 increased as much as 5 percernt over the remainder of the month. The point is, timing corrections is difficult, nay, impossible. I only try to figure out when they might happen so that I can consider if they are ignorable occurrences or possibly the start of something much scarier.

Interestingly, whenever a correction occurs, the financial media will try to single out the news of the day and blame the drop in prices on whatever that happens to be. Hey, I love the financial media, so I’m genuinely not trying to knock them. But they are also a business, and people like to buy or consume reasons, so the media gives reasons. People used to blame thunderstorms on the wrath of Zeus. People find comfort in things they don’t understand so long as there is a narrative associated with it.

When it comes to stock market corrections, the financial media’s reasons are often wrong because they associate proximity to causation. Obviously, if you think about it, the culprit is always the law of supply and demand. You may ask, what might affect the demand? For the next correction, I think the answer will be corporate earnings.

Analysts had cut their bottoms-up earnings-per-share estimates of S&P 500 companies dramatically, making it easier for those companies to handily beat expectations. That encouraged individual investors to rationalize chasing the price of stocks. However, I suspect it will be more difficult for companies to entice investors to buy stocks during the next earnings seasons.

Say, didn’t I mention earlier that if the index hit its 50-day moving average, then there’d be support at around 3,218-points for a total decline of just over 10 percent? Hmmm — coincidence?

(There is some hope for a better outcome. Prior to the 2018 occurrences, the last time earnings estimates were increased over the first two months of a quarter was Q2 2011, and the index fell “only” 6.9 percent throughout one month).

For the fourth straight month, the U.S. gained jobs after having shed tens of millions due to pandemic-related shutdowns. Friday, we learned that 1.37 million jobs were created in August, meaning that more than half of the job losses (52 percent) had been recovered. Unfortunately, there are still 11.6 million lost jobs to fill. Even if payrolls continue to grow at August’s rate, it will take eight and a half months to get employment back to pre-pandemic levels. Unfortunately, it will take longer, as the recovery pace will slow and, as a result, so will the rate of job growth.

I fear that news of massive job gains is bad because it reduces the urgency felt by Capitol Hill regarding passing another much-needed fiscal stimulus package.

I miss the good old days when good news was good news. And when politicians on either side of the aisle had common sense. That was a thing once, right?