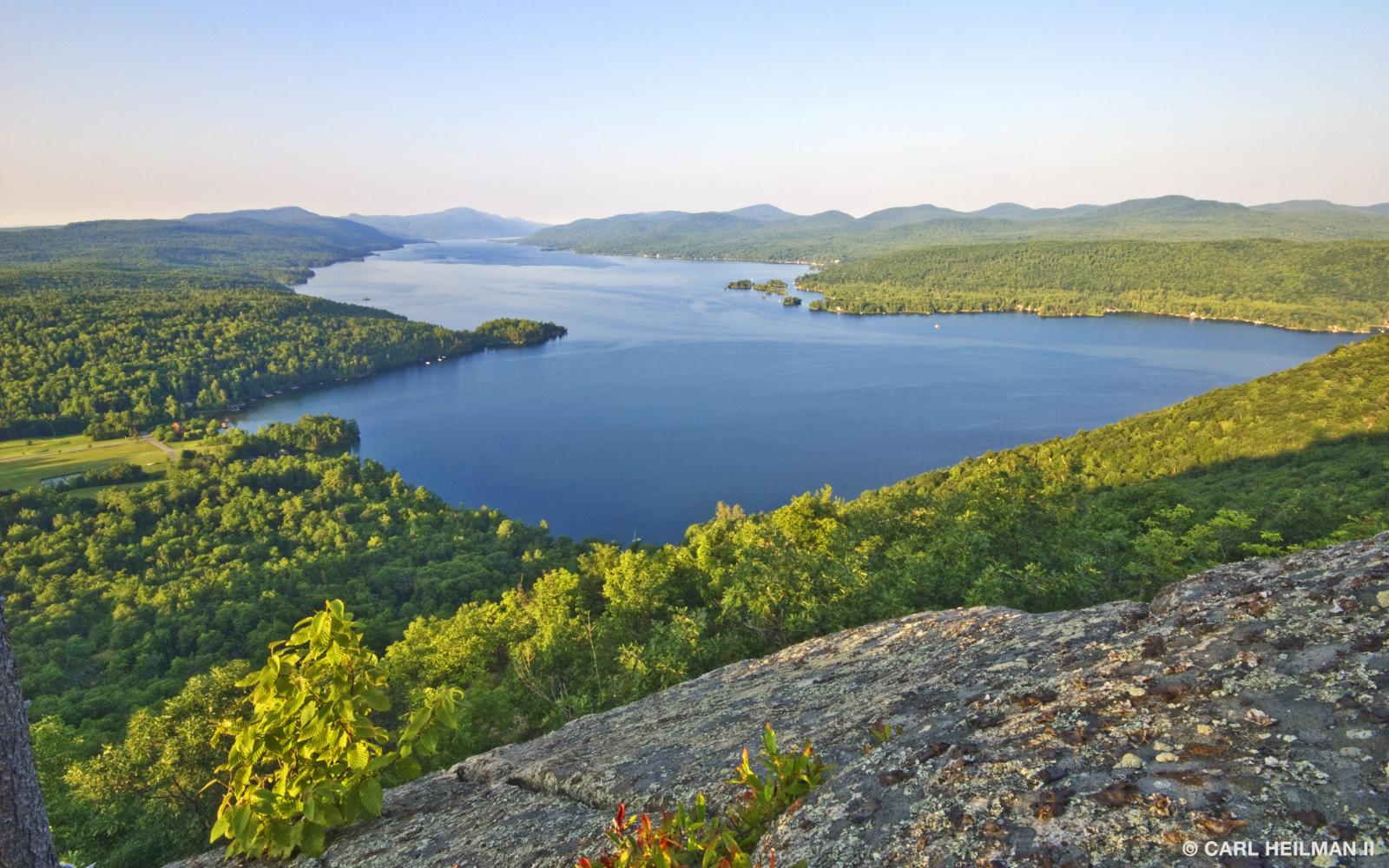 Dalton — My bride, Stacey, and I spent last week in Lake George, New York. It’s become an annual pilgrimage of ours, which came to be because my parents would bring the family there every summer since as far back as I can remember. We’ve been there enough times that the area is easy to navigate. But we’ve also been there enough so that we don’t feel as if we miss out on an adventure if we skip doing stuff we’ve done a dozen times before. We call it our “do nothing” vacation. We walk down to the lake and do nothing. We grab a book and do nothing. It’s intended to be a week where no work is done and batteries are recharged. However, I failed. On Monday, Aug. 5, when the Dow Jones Industrial Average dropped some 1,000 points at its low and all major U.S. equity averages closed out the day down nearly 3%, I went to work—well, kind of. I was on vacation, after all. I sent an email to my firm’s supervisor of capital trading, CC’d our six financial advisors, and instructed him to pull the trigger and get all available cash invested. (As a clarification, that didn’t mean if someone deposited a million bucks in their account last month that we necessarily got it all invested; it means that we had set up a planned investment of a portion of that cash and were waiting for the right time to pull the trigger.

I’ve been saying that, for the second half of the year, although the risk of recession is high, I’m still comfortable holding non-foreign equity because the biggest correction I am expecting for the remainder of 2019 would likely not exceed 12.1%, and that it would be brief (weeks or months) and temporary (providing another opportunity to sell, if you really needed to). But that’s if you’re already holding U.S. stocks. What if you’re not invested but want a plan on how to get reinvested back into the stock market? Just last week I wrote, “If you’re in cash, wondering if you should get in, don’t jump in all at once. Dollar-cost-average into the market judiciously, even slowly, then accelerate your purchases when we get a pullback.” Well, Monday dropped the S&P—from peak to trough—by 6.8%, matching the June drop. In response, I invested client cash deposits that we’ve been holding onto until the right moment. Even if the market drops to the most painful end of my expected range, a drop of 12.1%, we’re already halfway there.

Whether or not the correction goes from 6.8% to 12.1% won’t matter much in the long run, though I’m the first to admit it sucks when we’re going through it. I’m not trying to be cavalier about any drop in our portfolios. I know it’s common for financial advisors to try and calm investor nerves during those periods with comforting words. Pick the platitude: “we’re investing for the long-term”; or “fundamentals have not changed”; or “according to your risk profile, you said you’d be comfortable with volatility.” I’m not saying that. I am saying that—nay, admitting that—nobody is smart enough to consistently time the top, bottom, duration and magnitude of garden-variety corrections. I’ve gotten it right before on the big ones, but the key language here is “consistency” and “garden variety.” Trying to get too cute about dancing in and out of cash versus stocks during these relatively small and brief moves hasn’t generally worked out well for financial advisors, including myself. Instead, we need to determine when to grit our teeth and suck it up, and when to take action on those big ones.

Now isn’t the time for big action (i.e. going to all cash or, if you’re already in all cash, getting totally invested at once). It’s the time for little action—selling weaker positions and judiciously reinvesting proceeds and/or available cash into stronger positions. Readers know that I’m a fan of tracking breadth (the number of stocks advancing relative to those that are declining), and last week gave some encouraging signals. That big drop on Aug. 5 was what I call a 90% Down Day, in which 90% of both volume and points were down. That can be a sign of a washout, where heavy selling has forced the weakest hands out of the market and now buyers can step in. Those 90% Days aren’t always isolated instances. Lots of selling can perpetuate more selling. Ideally, to signal that 90% Down Day was the last of such in a sell-off, we want to see 90% Down Days to be followed by either a 90% Up Day or two consecutive 80% Up Days, signaling rejuvenated buying demand. On Aug. 8, Up Volume came in at 85.91% and Points Gained was 92.30%. It came close, but it failed to reach the status of a 90% Up Day, nor did we get a consecutive 80% Up Day. It’s not necessarily a sign that we’ll retest those Aug. 5 lows, but I also don’t feel comfortable suggesting we’re off to the races just yet. Stay invested, and/or get invested slowly. I’ll keep watching and let you know when it’s either time to buy more aggressively or to start getting out of the market.

Corporate insiders are shrugging off the recent correction
According to data provided by the University of Michigan as presented to Mark Hulbert, corporate insiders increased their buying when the market tanked last week. Given that corporate insiders know more about their company’s growth prospects than those of us on the outside, that’s an encouraging sign. I’ll spare you the math behind how U of M finance professor Nejat Seyhun calculates this, but an extrapolation of the data leads him to forecast a 14.1% return for the S&P 500 over the next 12 months.

Sentiment has improved for the stock market
For contrarians like me, when I see people bearish, I get bullish. And when they get bullish, I get bearish. It’s a little trick I picked up back in the ‘80s at the Bushwood Country Club. According to the American Association of Individual Investors survey, last week the percent of bulls dropped by 16.8 percentage points, and the percent of bears increased by 24.1. Those are huge moves, spurred on by that rough day of trading on Aug. 5. Bullish sentiment is now below the lows seen during the May correction and only 0.76 percentage points above the lows reached in Q4 2018. Similarly, bearish sentiment is now above what it was during May’s decline, and has just beat the Dec. 27, 2018, level. There have only been 11 other instances, going back to 1987, where bearish sentiment rose by at least 20 points without having done so in the prior six months. Generally if that happens and there’s no recession or economic disruptions, returns in the stock market are above average one year later.

China has been labeled a currency manipulator
Wall Street is going to be obsessed with the yuan, China’s currency, for a while. In response to President Trump imposing 10% tariffs on $300 billion of Chinese goods as of Sept. 1, China said, “Oh, yeah!” China is letting its currency decline to ease the effects of those tariffs, as well as to show President Trump that its will may be stronger than he had hoped. The Chinese can use this tool not only to offset tariff costs, but also to inject bouts of volatility into the stock market. And my guess is that the Chinese know this will rattle President Trump, especially going into an election season. The U.S. may have to blink first, if its president wants to get re-elected.

Fear of Brexit is bleeding into business
The UK economy, the fifth largest on the globe, shrunk last quarter for the first time since 2012. There is a lot of uncertainty regarding the country’s planned departure from the European Union. New Prime Minister Boris Johnson has pledged to leave the European Union trading bloc without a deal in place if the EU leaders refuse to negotiate a new deal. However, the EU leaders said the deal they reached with the former prime minister, but was rejected by UK ministers three times, isn’t up for negotiation. In my opinion, this is the biggest ticking time bomb out there.

Bankruptcy-related job losses are growing
In the first seven months of 2019, U.S.-based companies announced 42,937 job cuts due to bankruptcy, according to Challenger, Gray & Christmas. That’s up 40% over the same period in 2018, and nearly 20% higher than all of 2018. It’s the highest seven-month total since 2009, when 50,258 cuts were made. From January through July, companies cited bankruptcy as the reason for 11.6% of all job cuts. Since 2007, bankruptcy has accounted for about 6% of all job cuts every year. That’s ominous on the surface, but it’s worth noting that most of these job losses were in the retail sector, where major disruption regarding buying habits is occurring.

The next recession will begin March 29, 2020
The three-month/10-year yield curve inverted on May 23 for 40 trading days until July 18. It un-inverted on July 19, then immediately inverted again, starting this week with a streak of 17 trading days of inversion. According to information from Jim Bianco of Bianco Research (see chart below), the yield curve has inverted for 10 consecutive days or more a total of seven times in the last half century. On each of those occasions, a recession has followed. The average lag time from the date of inversion has been 311 days. Using this information, according to counting on my fingers and toes, the next recession is expected to start on March 29, 2020. 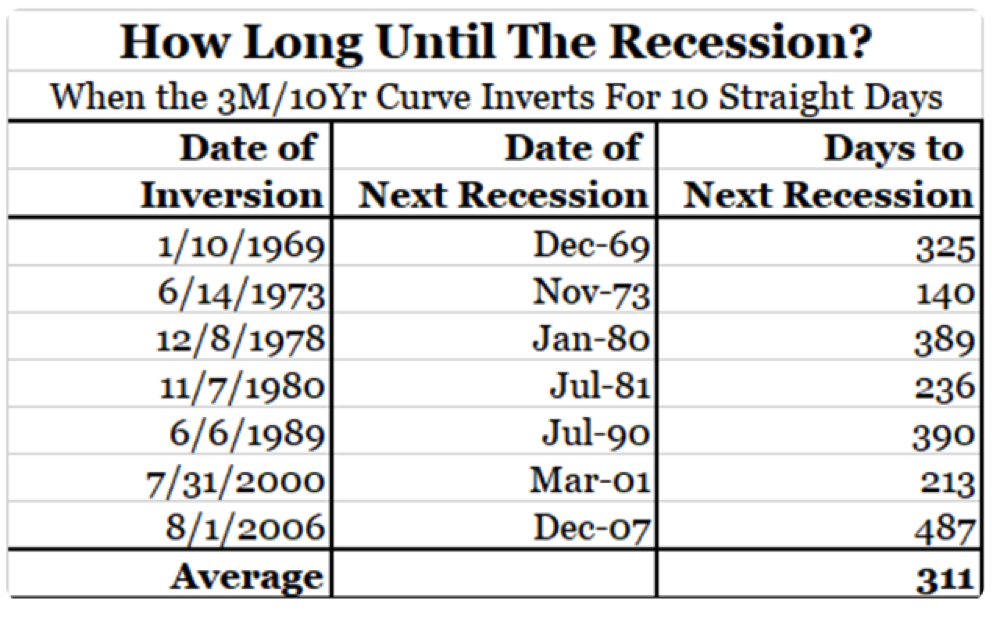 My own personal note on the yield curve is that it gets far too much attention. I am part of that problem. But let me defend my exhaustive coverage of the topic. The way I construct my economic modeling, I don’t believe that an inverted yield curve causes a recession. The yield curve is an elegant way to summarize the sentiment of the economy. Sentiment, the soft stuff, leads to action, the hard data. If you want to know what people will do before they do it, first you need to know what they’re thinking. Locally, according to my Berkshire Business Confidence Index, business owners are optimistic about present conditions, but they expect conditions to worsen over the next six months. That’s a disconnect, which, if sustained on a national level, is a precursor to a recession. The Berkshire BCI may be only one or two surveys away from formally predicting an economic slowdown in Berkshire County.