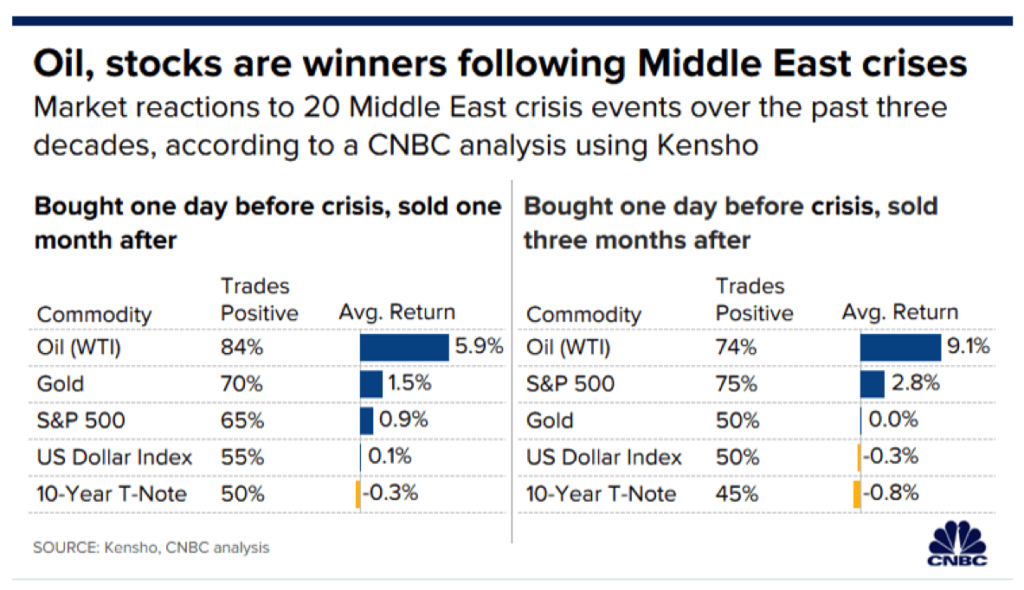 CAPITAL IDEAS: What happens to stocks after Middle East crises?

Dalton — The stock market kicked off the new year in record high territory, looking as if it shook off the summer’s recession scares, embracing some newfound economic momentum. I’m even shaking off some of my own 2020 recession concerns and thinking that we might have another year or so of breathing room before any stock market crash. Not that we’re expecting anything gangbusters for the economy, but 2% GDP growth, which has been the norm for this expansion, may very well continue for a bit longer. That level of growth should create enough jobs so that the unemployment rate will stay about where it is, and inflation should stay close to the Fed’s top-line target of 2%. While that is not extraordinary, it’s enough of a green light for me to stay invested.

However, valuations are overstretched, and the stock market is looking for a reason to pull back (queue the Iran story). If you take the value of all publicly traded stocks, as measured by the Wilshire 5000 index, compared to all corporate earnings, you get a price-to-earnings ratio of 15. The average of the last 40 years, the period for which we have data, is only nine. The all-time high was at the height of the tech bubble 20 years ago, at 17.5. Valuations are high right now. We’re going to need more than “not extraordinary” out of the economy to propel stock prices substantially higher.

The economy is OK, but if corporations struggle with profit margins, you’re going to see an OK economy and a not-so-OK stock market. The consensus year-over-year earnings growth rate is about 9% for 2020; the stock market will be vulnerable to punk earnings growth. And those reasons abound. For example, interest rates’ next move is likely higher, not lower, so there is some room for profit margin compression if corporations don’t clear their variable debt burden. Also, corporations could pull back on spending due to uncertainty over the presidential elections and the outcome of any potential new legislation, especially if Democrats are voted in and there could be anywhere from a 90- to 180-degree turn on economic policy. The election will cause a slowdown in decision making, and if that shows up in declining activity and weak productivity growth, the stock market will want to adjust to that new reality.

That’s not to say that it’s clear sailing if the Trump administration retakes the White House, because Trump will go right back to his playbook. And while that’s good news for the economy and the stock market in some ways (lower taxes, deregulated industries), the resumption of the U.S.-China trade war is going to ramp up again, as will stock market volatility.

Political prognostications aside, the economy must struggle with the here and now. On Friday, the media focus was on the U.S. drone strike in Iraq that killed Iranian Gen. Qassem Soleimani. As “WWIII” trended on Twitter, the December 2019 Institute of Supply Management survey drew little attention. But it should have. The ISM is an indicator of recent U.S. economic activity, based on a survey of purchasing managers; it monitors changes in corporate production levels from month to month. It was expected to increase from 48.1 to 49.0 (anything below 50 is contraction). Instead it declined to 47.2, its fifth straight monthly decrease and the lowest level since June 2009, when the U.S. was exiting recession. Commentary from the managers from almost every subsector was negative. Manufacturing is “only” 11.65% of U.S. gross domestic product. However, I’ve previously seen weakness in manufacturing be enough to cause an “earnings recession,” where the aggregate earnings of corporations stagnate for a couple quarters or more. This happened when oil prices collapsed from 2014 to 2016 and the decrease in capital spending in the oil sector was greater than the boost consumers received from cheaper gasoline and heating oil. The stock market can hold a high multiple, like it is now, if there is growth to support it. But multiples contract if investors can’t look forward to ever-higher earnings. I may be less confident today in predicting a 2020 recession than, say, prior to Aug. 1, just before the Fed cut interest rates three times, but that doesn’t make me confident that the economy is strong enough to support current stock market valuations.

If you’re like me, you don’t know much about Gen. Qassem Soleimani now, and you never even heard of him before midnight on Thursday. To help clarify the magnitude of the U.S. drone strike killing the general, I’ll cite a quotation from Roman Schweizer, the aerospace and defense director of Cowen Washington Research Group: “This is the equivalent of Iran killing the U.S. Chairman of the Joint Chiefs of Staff or the Director of the Central intelligence Agency and then taking credit for it.” In other words, it’s kind of a big deal.

I am going to be talking a lot about politics in this column, but only so far as it connects your money. It won’t do us much good to talk about how bad this dude may have been (his operations within Iraq have been responsible for the deaths of 600 Americans), or if some other tactic should have been employed. The fact is it’s done and now we need to think about your money. Well, I guess it ain’t done. We also must consider the potential fallout. Former CIA acting director John McLaughlin doesn’t believe there will be a rapid de-escalation between the U.S. and Iran. As he says, “it will require sophisticated diplomacy and a fine-touch strategy that neither side has shown to keep this from escalating into broad violence in the Middle East.” So we may not be out of the woods just yet.

But since we can’t figure out what’s going to happen in the future, let’s look at what’s happened in the past. Thanks to CNBC for doing the heavy lifting by way of Kensho (see graph above).

Aside from a temporary knee-jerk spike in oil, crisis events in the Middle East don’t seem to have much impact on trades, including the stock market, as measured by the S&P 500, over the following month and three months. Even the spike in oil prices is likely to be less subdued in this and future events as the U.S. becomes less reliant on foreign oil inventory. The U.S. produces about 13 million barrels per day and consumes 21 million, so higher oil prices could depress economic growth. But I’m not worried about that yet. Not only would there need to be a sustained and significant jump in oil prices to become troublesome (something closer to $75 per barrel of West Intermediate, or WTI, crude oil, or a 20% rise, which is greater than the 9.1% average three-month-gain). That is possible, especially if Iran were to fire missiles at oil fields in the Arabian Peninsula, which it reminded us is an option (as well as other options, such as using economic tools and cyber attacks). However, we’ve seen recently that consumers can handle higher oil prices.

Earlier I referenced the 2014-16 earnings recession caused by low oil prices reducing capital expenditures. WTI went from $30 in 2016 to $50 in four months, and then to $75 a bit more than two years after that. After a jump in prices on Friday and Monday, after news of the assassination in the Middle East, WTI was trading at about $64, its highest price since April. Consumers, and their spending, comprise 68% of the U.S. GDP. Higher oil prices won’t necessarily be enough to derail the U.S. consumer. Don’t get me wrong: If oil prices are high enough long enough, it could be enough. But historically, regional geopolitical events are not what ends either business or market cycles.

To clarify, the economy is not immune to higher oil prices. Spikes in oil prices have been precursors to recessions. For the last three recessions — 1990, 2000 and 2008 — oil increase in prices nearly doubled: 135%, 100% and 96% respectively. Oil crated in price in December 2018 to $45.33 per barrel of WTI. A doubling of that number still has some cushion, so that’s comforting. But as I said earlier, if WTI sticks around $75 per barrel, that could be troublesome.

This market melt-up is nearly done; we could get a few more percentage points of gains into January, some mild pullback to the market’s 50-day moving average (so about a 5% drop, but wouldn’t rule out 7 or 8), and then a rebound. Investors have been conditioned to buy the dip. With the U.S.-China trade war, they’ve also been conditioned not to extrapolate geopolitical shocks, as that strategy has made them a lot of money recently. I’d expect some buying if stocks fell. If that happens, that rebound will be telling. We’ll dissect the internals and the fundamentals when (and if) that happens to assess if it’s just going to be the typical wavering of stock prices as investors determine who may be the next leader of the free world, or if it’s going to be something more substantial.

The stock market is overbought and overloved and vulnerable to a pullback at any time. And while the targeted killing of Gen. Soleimani may not fit the textbook reason of why the stock market should sell off, according to the average returns following Middle East crises, I wouldn’t be surprised if a correction started right about now, and that the media narrative would be that it’s occurring because of growing fears about unrest in the Middle East. As if that’s news. I mean, the week prior, U.S. airstrikes killed 25 members of an Iranian-backed Iraqi Shiite paramilitary group responsible for rocket attacks that killed a U.S. contractor and 26 U.S. allies in late December. The week before that members of that same group, Kataeb Hezbollah, attacked the U.S. embassy in Baghdad as they chanted “Quassem Soleimani is our leader.” The region had been unsettled prior to this assassination. And while it’s likely to get worse, any significant pullback in stocks right now would more likely be correlated to the assassination, but not necessarily caused by it.

I am betting that it’s OK to stay in stocks a bit longer. Contrary to Twitter trends, the stock market won’t expect a full-scale war, and if there is, then the Fed will intervene. I take that back: The Fed has already intervened. In the last four months the Federal Reserve has expanded its balance sheet by $600 billion by making large-scale asset purchases. That’s a lot. The Fed isn’t calling it quantitative easing, but its impact on asset prices, like stocks, is similar to QE. I can’t call it quits on the market just yet, but I’m keeping my finger on the trigger because a lot can go wrong in the next few months.