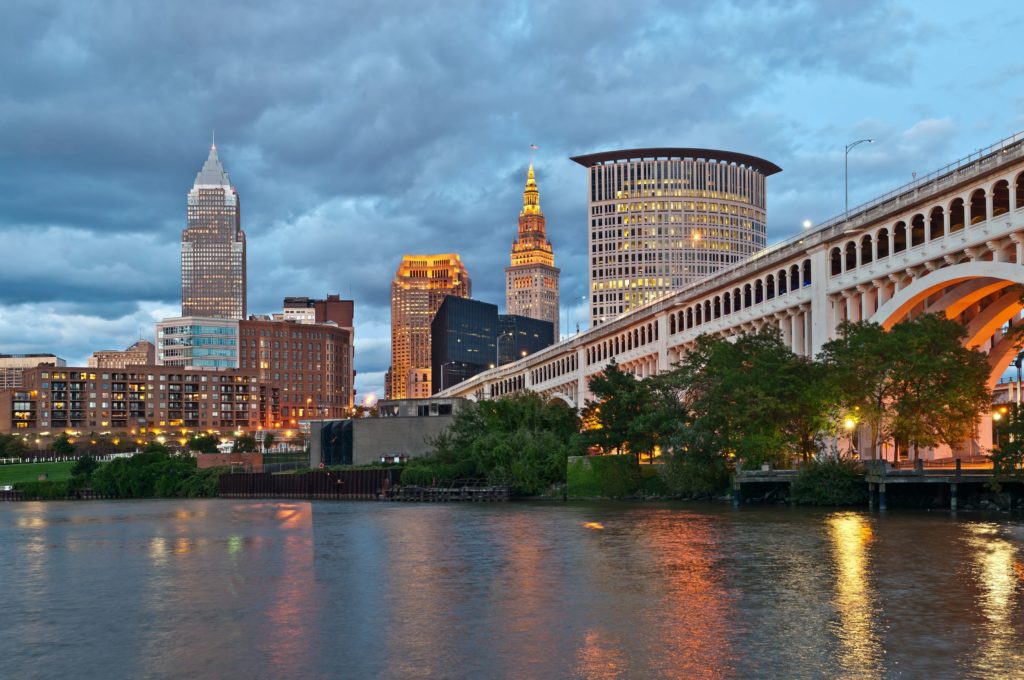 The skyline of Cleveland, Ohio. Photo courtesy the Finch Group

Dalton — I recently had the opportunity to spend a few days in tropical and exotic Cleveland, Ohio. A small group of other Certified Exit Planning Advisors and myself met to discuss our work with businesses—growing them, turning them around, managing operational and team inefficiencies, and more. I started doing this sort of work, first for my own company, more than a decade ago. Since then I’ve been helping our business-owning clients with these tasks and also using this information for identifying sound investments. Most folks who would be interested in my continuing education in the world of business growth acceleration would be CEOs, COOs and owners. But it’s not just a business conversation, it’s an investment conversation.

Do you know who gets the worst returns in the stock market? People who buy something because it’s gone up in price and sell something because it’s gone down in price. Time and time again, following the crowd has proven to be the stupidest thing in the world of investing. But so many people do it, it boggles my mind. I’ve given presentations on why we humans do it. I call it “forecasting for dummies.” I put “forecasting for dummies” in quotes because I remember being about 25 years old at an investment conference in Boston. It wasn’t about what to buy, but rather helping us with forecasting methods—a sort of “give a man a fish and he can eat once, but teach a man to fish and he can eat forever” kind of thing. And what sticks out the most was how irritated the presenter was that human beings fell prey to recency bias, which is the tendency to give too much weight to recent experience and to ignore historical evidence. And when he called this “forecasting for dummies,” he wasn’t referring the popular book series; he was frustrated. I remember being on a plane to see clients the following week and spending my layover reading a Harvard-published paper on the matter, and while they weren’t as annoyed as he was, they definitely corroborated his findings.

The lesson here is that falling prey to recency bias means trying to buy yesterday’s returns. And this can be particularly deleterious at extremes. As famed investor Warren Buffett said, “buy when there’s blood in the streets, even if the blood is your own.” It’s comfortable to put winners in your portfolios, but as Warren warned, when it comes to the stock market, “you pay a very high price for a cheery consensus.”

The work I did in Cleveland reminded me that we don’t have to buy only stocks that have only been beaten down. There are three main actions in investing: buy, sell and hold. So while I might prefer to buy stocks after they get clobbered, a) I might not always have that option (i.e. stocks could go up a lot before they go down, or maybe we’re just not expecting a correction); and b) I don’t want to sell everything I buy once prices get back to a neutral valuation. In my own business, and for my business-owning clients, we make more money and become more valuable because we identify, protect and build value. If I am going to hold or buy a neutral investment, I’m going to need to know what value is fair, that the value is being protected (I don’t like risk), and that the value can be built up. In the weeks and months to come, I’ll be sharing a bit more of what I do for my business and fellow business owners because it will give a small-town narrative to a big-world investment philosophy. What happens in small-town America can be applied to managing your equity portfolio.

Last week the Retirement Confidence Survey was released. You may be interested to know the reasons why some people are planning to delay retirement (respondents could give more than one reason):

The report cites that “the RCS has consistently found that a large percentage of retirees leave the workforce earlier than planned (48 percent in 2017). Many who retired earlier than planned did so because of a hardship, such as a health problem or disability (41 percent). One-quarter say they retired due to changes at their company (26 percent).”

In other words, a) people are scared that they can’t afford to retire now; and b) some of those planning on working longer to be confident they don’t run out of money in retirement aren’t even given the chance to do so.

One of the more popular lines from then-candidate Trump was that America was going to be “tired of winning.” After six consecutive weeks of losses for the Dow Jones Industrial Average, wobbled by sharp trade talks, investors are tired of losing. As you can see from the graphic below, stretches of weekly losses like these are rare. There have only been seven seven-week stretches, and one eight-week stretch since 1900. This is the first six-week stretch since 2011. 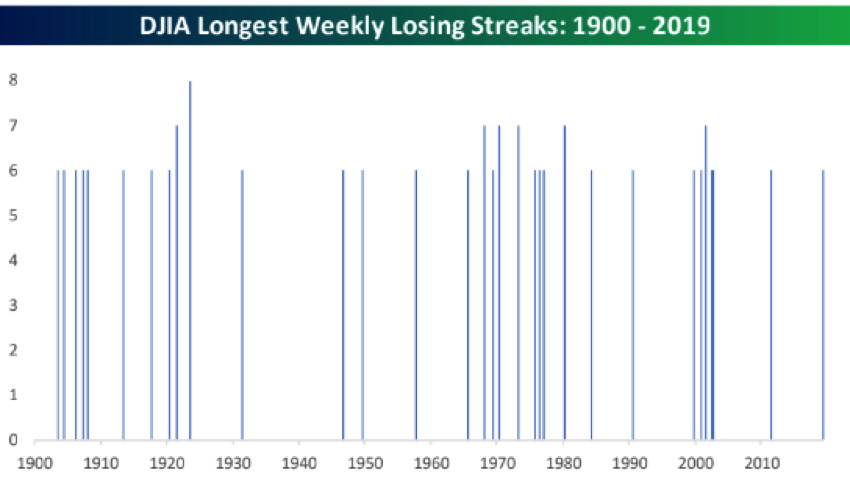 While there have been other factors, the trade wars have cost investors about 17.5 percent of portfolio returns. The annual returns of the stock market over this bull market has been about 12.5 percent; that’s a theoretical 17.5 percent of lost portfolio returns over the 17 months since January 2018. True, sideways movements for the stock market are not totally uncommon—there have been two other stretches this bull market alone, both about five months longer than this one. In 2011–12 stock prices struggled with the European financial crisis (which was also around the time of the U.S. debt downgrade) and in 2015–16, there were oil and dollar shocks to contend with. 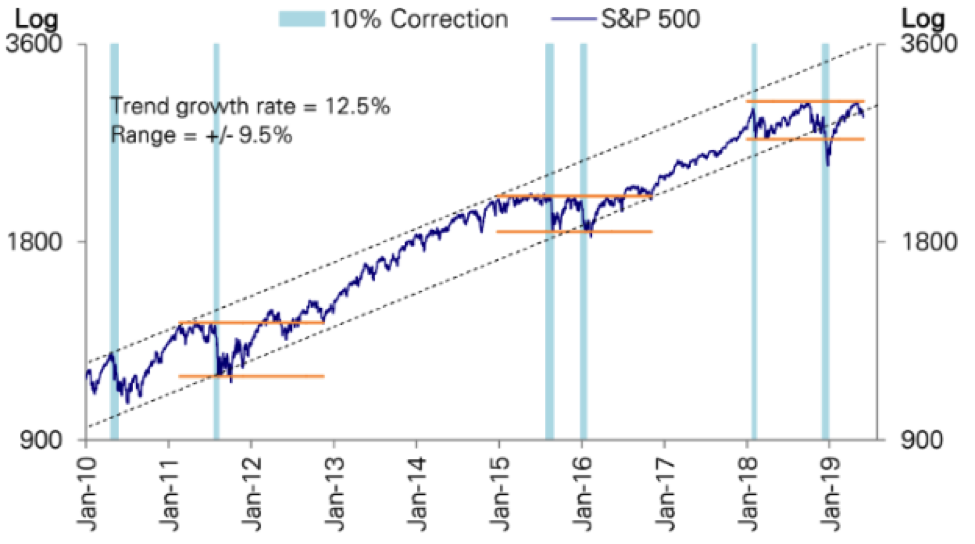 The question is will a long sideways move break to the upside or the downside? History argues that corrections of time like these tend to break to the upside. However, winning or losing for the stock market for the next 17 months going into the presidential election will very much depend on how strongly President Trump feels he’ll need the stock market’s strength at his back to secure a second term and how much resolution we can get on the trade wars. Given that, over the weekend, trade tensions cooled with China but heated up with Mexico, the day-to-day discourse has been a bit of a wash recently. Of course, trade talk improvements won’t really matter to the stock market if they occur during a recession. If the U.S. decides to keep pressing the new tariff talks on Mexico and decides to follow through on the current and threatened tariffs on China, we could see a recession as early as the first half of 2020. In which case, the stock markets could see losses of 25 to 33 percent over 12 to 18 months, and without the benefit of a quick snap back to previous highs. 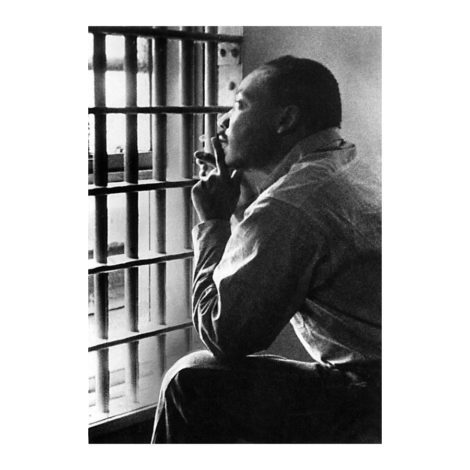 Five Writing (and Living) Lessons from Dr. King’s ‘Letter from a Birmingham Jail’

I'm quite sick of your caveman-like opinions that are not constructive and lack any level of supporting facts. If you stop those, I'll stop telling you to go back to your cave. — AB

Kind of sick and tired of your “cave” insults. It’s just not funny. Sounds infantile. Why not consider growing up and arguing like an adult?