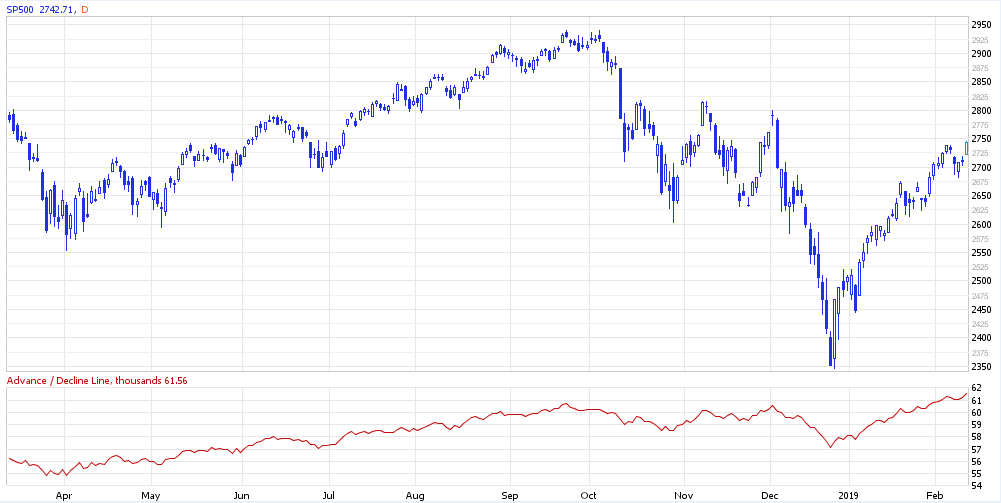 Dalton — Two weeks ago, in the Capital Ideas article “A lower high and icicles,” I wrote that “…we’re still in a cyclical bear market until proven otherwise. If we can break the S&P 500 above the 2,740 level, its 40-week moving average, I’ll feel more comfortable [that the stock market’s rally is sustainable].”

Last week the index hit that resistance level (2,738.98 to be exact) but couldn’t break through. That failure looks merely technical in nature so far, as we are yet to see material damage done to the short-term rally off the Christmas Eve lows.

For instance, regarding more of a technical shift than a fundamental change, last week we saw late-day buying, which tends to be a good sign of stronger hands accumulating shares. Also, the S&P 500’s cumulative advance/decline line made an all-time high last week. The A/D line is a technical indicator that measures breadth by plotting the difference between the number of advancing and declining stocks; when stock indices are rallying, a rising A/D line confirms the uptrend by showing broad participation of many stocks, as opposed to the markets being held up by just a few names.

Still, for many investors, significant concerns remain. Some fear that the advance has been nothing more than a rally in a bear market and the Christmas Eve lows will be revisited. Others fear that stock prices have gone “too far, too fast” and now the market is vulnerable to familiar headwinds such as trade talks, slowing earnings growth rates, a government shutdown, or any other of the recent favorites.

Both fears are rational and the outcomes not unlikely. However, the greatest probability is for stock prices to be higher a year from now. But that doesn’t stop me from worrying about the coming months. As stated, the A/D line has recently evidenced support of the rally. The Christmas Eve low did not match the textbook bottom of a stock market decline. When stock indices are declining, you want to see that A/D line firming, even rising, exhibiting that the majority of stocks in the index are near the end of their declines. However, the percentage of stocks in the S&P 500 hitting new 52-week lows in late December hit a staggering 48.5 percent.

Nearly half of the stocks in the index hitting a new low on the same day has only happened twice, when the net percentage exceeded 50 percent in August 1990 and October 2008. In both instances stocks were up handsomely a year later, but they stumbled prior to those big gains. These two periods reacted similarly to most other major market sell-offs that occurred with an A/D line that didn’t see improvement at its low—a retest of the lows in which the percentage of stocks making new lows holds up better, thus indicating a more durable low.

History doesn’t always repeat itself, but it does rhyme. This time around that rhyme looks like a 4 to 10.5 percent correction over the next few months (with my guess being closer to 4 than to 10.5), then better times ahead. Since the stock market corrects 5 percent, on average, three and a half times per year, it’s admittedly not that daring a prognostication.

Earnings season is in full swing, with two thirds of the S&P 500 constituents having reported. Fourth quarter 2018 beat rates have been good to fine (71.5 percent reporting above analyst expectations, compared to the historical average of 64% percent, and 21.6 percent reporting below expectations compared to a historical average of 21 percent). However, aggregately, companies are seemingly giving up on this quarter. The percentage spread between the companies raising guidance versus those lowering guidance is the lowest in over a decade and a half. That could be good news.

There is plenty of historical evidence of markets performing better when companies (and the Wall Street analysts that soon follow) take a hatchet to expectations. Stock prices react more to “better or worse” than they do to “good or bad” (or, said another way, stock prices react more to relative metrics than to absolutes). When expectations get taken down enough, it sets up the market to react positively to upside surprises.

Trailing earnings for S&P 500 companies relative to the current price of the index puts its price-to-earnings (P/E) ratio at about 18. (The P/E ratio is only one of many valuation metrics, but it is very popular.) Over the past 30, years that P/E ratio of 18 compares to an average of 19.5 and a median of 18.6. Valuations are pretty reasonable right now.

While that is somewhat reassuring, valuations are never a reliable timing tool for periods of less than a year. More important to the short-term direction of the market is the 12:01 Eastern Time March 2 truce deadline for an agreement to be struck between China and the U.S. on their trade dispute. Technical and valuation concerns aside, it would not be unreasonable to see stock weakness over the next two and a half weeks as investors hold off of any renewed buying until they see more clarity on that issue.

If the trade truce deadline isn’t enough to get traders to wring their hands, they’ve still got Brexit to worry about. On March 29, barring an extension, Britain will officially exit the European Union—we just don’t know yet in which manner. The effects to the European economy have already shown up in corporate hand wringing. Of those two-thirds of the S&P 500 constituents who have reported earnings for last quarter, companies that generate more than half of their sales inside the U.S. had earnings growth of 16.6 percent, while the companies that generate more than half of their sales outside of the U.S. only had growth of 8.4 percent. International consternation may very well be the reason we see weakness in the market before we see more strength.