Dalton — Last Thursday, July 18, the yield curve (the spread between yields on 10-year and three-month U.S. Treasuries) turned un-inverted for the first time since May 23 and ended a 40-day streak at inverted levels. As a refresher, an inverted yield curve is an interest rate environment in which long-term debt has a lower yield than short-term debt instruments of the same quality. And that is not how it usually works, as long-term rates are supposed to be higher than short-term. An inverted yield curve is considered to be a predictor of an economic recession. When people believe there is an increased risk of a crisis, like a recession, they shift their money into the safest and most liquid investment asset in the world, the 10-year Treasury note. This drives up its price and drives down its yield, and becomes an indicator of negative sentiment regarding the direction and future of the economy and the risks it may face. Even if the sentiment is wrong at the time, how we think dictates how we act, and it can become a self-fulfilling prophecy that bad times are coming. The good news is that the lower rates will drive some business and financial moves in the short term (refinancing your home so that you have more disposable income, or businesses buying new equipment with better financing costs). That pulls demand forward and helps the economy in the short run, but it does sometimes take away from future growth since the expenditures were made then and don’t need to be made later.

Now, we’re getting very technical here regarding the un-inversion because the curve barely moved out of inverted territory—I mean, less than one basis point. And it went back and forth the next day between inverted and un-inverted before ending flat. And then it inverted again Monday and Tuesday. But, hey, it’s math; un-inverted is un-inverted. You can’t argue with that. Over the last 60 years, there have been a dozen other times when the yield curve inverted for a stretch of more than 30 trading days in a row. And that’s been a pretty reliable indicator of a coming recession (of the occurrences listed below, only 1967 was not associated with a recession), but the lag can be a very long time. Due to that lag, we’ll add it to the list of leading indicators that might argue for a coming recession, perhaps as soon as sometime in 2020, but let’s tuck that away for a later conversation. Instead, let’s stop and think about what the stock market looks like coming out of 30-day yield curve inversion streaks. Now, a quick caveat: we don’t know yet for sure if the un-inversion breakout is sustainable. But, like I said, math is math and we broke that streak. If you examine the performance of the S&P 500 after it breaks that streak, the average returns in the following week and month after those prior 12 periods were positive, with a consistency of positive returns 75% of the time.

We’ve been saying that we expect some softness in the market over the next few months (nothing major or permanent), and the historical average performance for the three months following the un-inversion has been negative, as has been the following six months, with the consistency of positive returns closer to 50/50 for those two periods. This doesn’t sound too bad until you recognize the massive variance of returns, which also holds true for returns one year later. 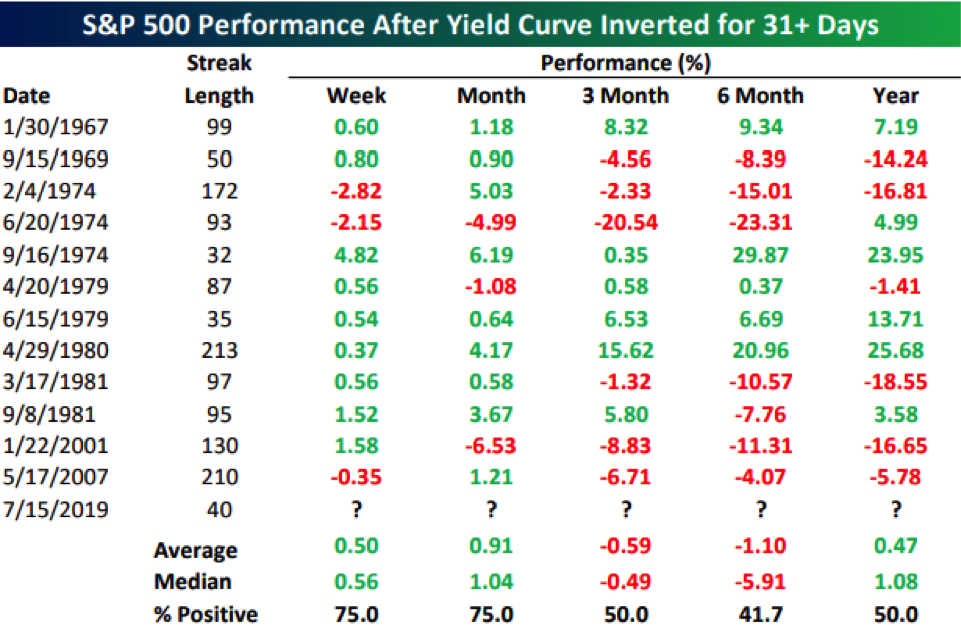 The takeaway is that I feel that while this is more evidence of a coming recession, and while I’m prepared to get out of the market, I am not fleeing to safety yet. I’m scared but still not yet officially “calling” the recession. Recently there has been better-than-expected data for small business sentiment, jobless claims, Empire manufacturing, Philly Fed manufacturing, homebuilder sentiment, retail sales, the Baltic Dry Index, CPI and PPI. The numbers are still pretty good. However, we’ve all seen pundits talk about how good things still are even as the economy is slipping into recession. I remember pretty much every financial advisor in 2000 and 2001, and 2007 and 2008 talking about how things “still looked good.” And in many instances, they were absolutely right—the key word there being “absolute.” However, the stock market seems to care less about the absolute measures of good or bad, and more about the relativity of better or worse. Direction is more important than magnitude.

Citigroup tracks how economic data is progressing relative to the consensus forecasts. Currently it’s negative (conventionally considered bad), but it’s less negative than it has been (again, direction is more important than magnitude). 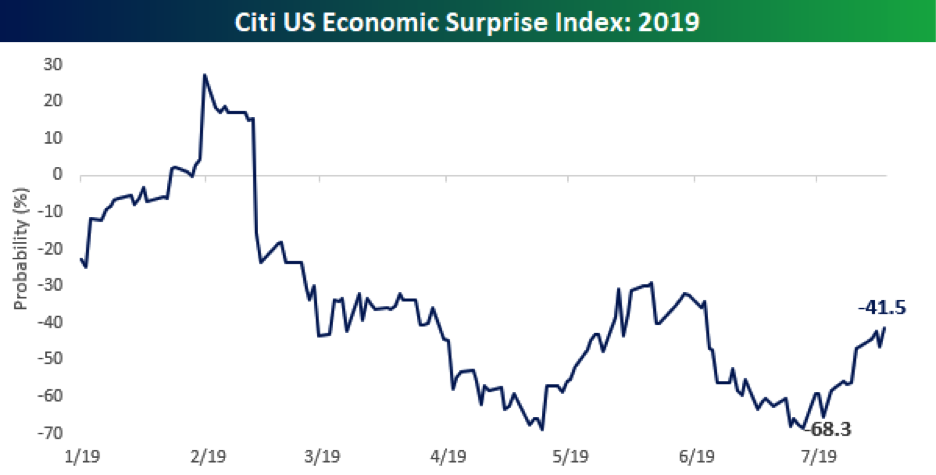 To track the economy through what is now likely a late-stage expansion to what will eventually become a recession, I am monitoring a basket of leading, coincident and lagging indicators and comparing them to their performance around the time of the previous five recessions. Right now, believe it or not, I see unemployment as a risk (magnitude is great, but is it so great that the directional risk is now negative?), as is the aforementioned yield curve and housing permits. Also, industrial production and corporate lending are starting to get my attention in a negative way. However, so much more is staying strong or improving—well, except for trade tensions, business confidence waning and corporate debt levels moving from 48% to 57% of GDP. Geez. The more I think about it, the more scared I get. I’m not going to push it yet, but my finger is going to remain close to that “sell” button even if I don’t need it until next year. History does show that a recession normally occurs 13 months after a yield curve inversion begins. That would imply a recession by mid-2020. Since the stock market typically leads the economy, it would probably behoove us to push that sell button before then.