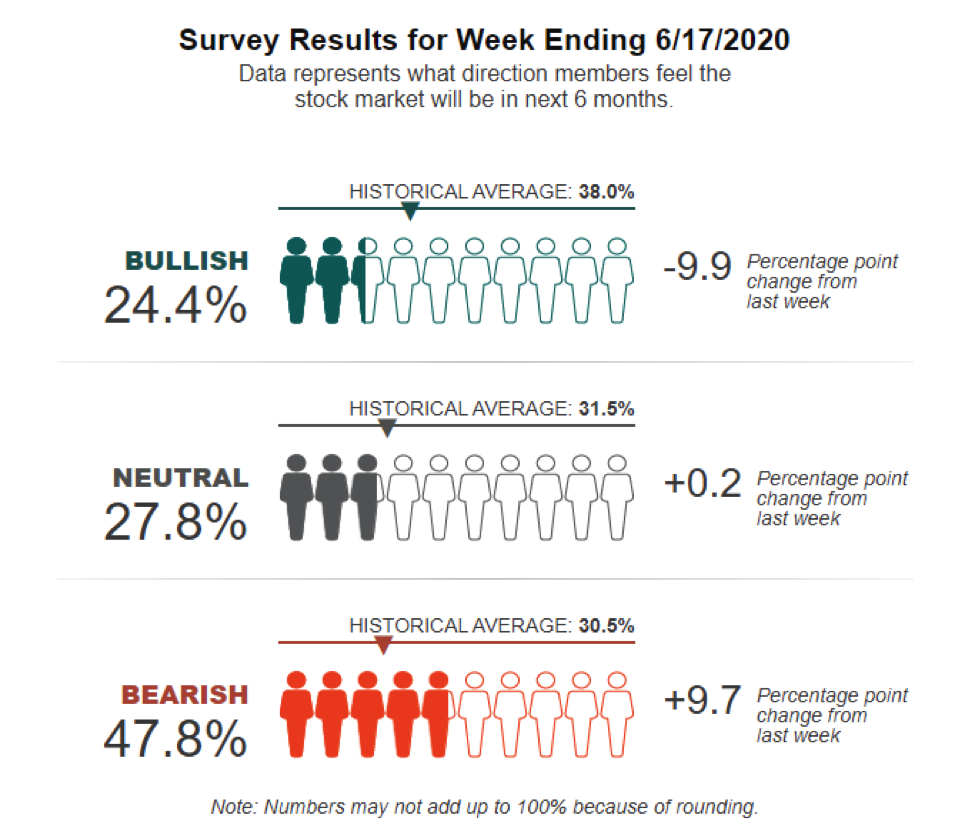 Dalton — Remember the other day, on June 11, when the stock markets dropped more than 5%? Yeah, no. Nobody does. One day, the world is ending, the following week and half and nobody remembers nuthin’. Not only was there little follow-through selling to the June 11 crash, but buyers stepped in to gain control of the action. At the time, I thought that might be the first 5% of an 8-16% decline, but absent a resurgence of COVID-19 that could keep businesses closed, we might experience a pretty decent rally before the next pullback.

Some say the stock market has been on steroids (fiscal policy steroids) since the March 23 low. I say it has been on Tic Tacs: great brea(d)th juiced with some sweet, sugary Federal Reserve love. An example of good breadth is that each of the S&P 500’s 24 industry groups has rising 50-day moving averages (with 91.7% priced above their 50-DMA). Also, both Friday, June 12, and Tuesday, June 16, were 80% Upside Days (trading days in which 80% of both the volume and price action are up). The rush of buyers to the market represents an underlying bid for stocks and implies an improving possibility of the continuation of the market’s advance off its lows since breadth typically leads the price of indices higher.

I wanted to write about how quickly the U.S. economy is recovering, but I’m finding that difficult to do.

This is going to sound like a digression, but one of the traps Ph.D. students fall into is that when it’s time to write their dissertation, they propose a hypothesis and then accumulate evidence to support or contradict the hypothesis. Kinda. Instead, what often happens is that we want our hypothesis to be true, so then we seek out data that supports it. When we find contradictory data, we weight its importance less, perhaps by discrediting the validity of the study.

Subconsciously we do this more often than we suspect. It comes up in politics all the time. I’ll hear someone rant about what they’re doing on THAT side of the aisle, but when “their side” does something similar, the former ranter will somehow validate their side. We don’t like to accept evidence that contradicts our narrative; it’s upsetting to think that our belief system is wrong.

I went into writing this portion of Capital Ideas hoping to share all the good news that’s happened over the last couple weeks. I like to think that I’m clever enough to debate either side of an issue, but if I were to do so on the subject of just how V-shaped the economic recovery has been or will be, I’d be lying either outright or subconsciously.

Some parts are V-shaped. Some. Retail sales jumped in May as state economies reopened and people had stimulus checks in hand. The housing market experienced a big jump in weekly mortgage purchase applications. But most everything else is sluggish, and since the labor market continues to struggle, the V-ish-shaped bounce of the U.S. economy we’ve seen so far is in danger of fading. The longer it takes for the labor market to recover, the more vulnerable businesses and households will be. Based on initial claims for unemployment insurance remaining high, I see no clear path to a faster-than-normal return to a healthy labor market.

The longer it takes to find a treatment or vaccination for COVID-19, the more vulnerable businesses and households will be. Last Friday the stock market dropped sharply on fears of continued business shutdowns as Apple said it was temporarily shutting 11 stores in Florida, Arizona and the Carolinas as infection rates rose. And that’s when investors heard the news — most don’t even know that Sonoma and Lassen counties in California reversed reopening decisions, or that the Commonwealth of Massachusetts has delayed its third phase of reopening. Additionally, just as the U.S. reported more than 30,000 new coronavirus cases on each Friday and Saturday this past weekend (the highest daily total since May 1, according to Johns Hopkins University), locations such as Nashville, Palm Beach County, parts of Wisconsin and Philadelphia, Tucson, North Carolina, and more have made similar delays due to a rise in infections or an abundance of caution.

Unfortunately, in part because of those delays, I expect it to take a long time to see the labor market recovery. As I said in the May 13, 2020, column, “Fewer hedges, more health care”: “Four years is about the amount of time it took after the Financial Crisis to get the U.S. GDP back to pre-crisis levels and cut the unemployment rate almost in half. I believe that after an initial and sharp -but partial – recovery, the remainder of the process…will be protracted.” The last reading of the Bureau of Labor Statistics saw the unemployment rate dip to 13.3%. If the U.S. economy follows the path post-Financial Crisis, it may be the year 2024 by the time we see the unemployment rate back in the mid-6’s.”

How do you feel?

The stock market often does whatever it must to frustrate the most people possible. In other words, the crowd is often wrong when it comes to stock market expectations. Because of that, I tend to be a contrarian — someone who invests against the crowd. Certainly there is some nuance to that, but currently the crowd feels relatively bearish, which makes me feel a bit more comfortable remaining in the stock market for now, despite rising shutdown concerns.

Investors seem to be skeptical of how quickly the stock market has turned around from its March 23 lows. A weekly survey by the American Association of Individual Investors showed expectations for stock prices to fall throughout the next six months, outpacing expectations for stock prices to rise by a ratio of almost 2-1. According to the AAII surveys, bullish sentiment has drifted back down to its lowest level since May 14 (24.4% bulls) just as the number of bears hit its highest reading of the month (47.8%). I don’t currently, or really ever, expect a straight line up, but I’m one of those betting that stock prices will rise.