Dalton — Investing in stocks just got more attractive because of a policy shift announced by the Federal Reserve’s Federal Open Market Committee on Aug. 27. Details are found in the Federal Reserve’s statement of longer-run goals and monetary strategy. That statement was initially presented in 2012, but as Fed Chair Jerome Powell put it, “since the economy is always evolving, the FOMC’s strategy for achieving its goals, or policy framework, must adapt to meet the new challenges that arise.”

The gist of it is that the Fed will move from targeting an inflation rate of 2% to targeting an average of 2%. For years, the Fed’s preferred measure of inflation, the personal consumption expenditure price index, has been running below 2%. The Fed will strive to reach an average of 2% by letting inflation run “moderately” above that level “for some time” after periods when inflation has run cooler. The Fed can now juice the economy even more than it has been without violating its own rules.

What does that mean? Regarding No. 4, in particular, it means that the Fed will no longer tighten monetary policy just because the unemployment rate falls below what it refers to as NAIRU (the non-accelerating inflation rate of unemployment). NAIRU is not precisely “full employment,” but it’s the closest the economy can get to full employment without inflation accelerating due to higher wages. Overall, it means that the Fed will do what it can to get the economy to run hot with less regard for inflation control than before. Stocks like a growing economy, so that’s good for stock investors.

The stock market also likes a bit of inflation. Company profits tend to increase during times of inflation. Per the graphic above, according to Fidelity Investments “inflation has typically been a tailwind for profits.” In every decade since the 1980s, an uptick in inflation has led to an acceleration in corporate earnings because companies command pricing power.

It may sound counterintuitive that inflation is supportive of better corporate earnings, but there are two considerations. Firstly, inflation is often a symptom of economic growth, so that leads to better corporate profits. Also, the alternative of deflation creates unique problems, including dragging down demand as potential buyers wait for lower prices, which creates a negative feedback loop.

Don’t sell due to political ideology

It’s at that time. Every four years, right about now, clients — Democrats and Republicans — call me and request that I liquidate their portfolio because “the other guy” is going to win, and it will most certainly be the end of the world as we know it. Well, Lenny Bruce is not afraid, and I feel fine. Let’s talk about why.

Reelection bids for sitting presidents don’t tend to go well if there is either a 20% decline or a recession in the year of their reelection attempt. In 2020, there were both. Since 1900, there have been five instances in which one of these events occurred, and in zero of those instances has the incumbent party retained the White House. Given that COVID-19 was an exogenous event that caused both the decline and the recession, there is a possibility that voters won’t blame President Trump and he’ll buck the historical trend.

Not that people necessarily vote based on the stock market’s direction, but the stock market is correlated to a level of confidence in the overall economy. The massive amount of monetary and fiscal stimulus in the system will likely continue to steady the economy and boost the market. This could help President Trump be the first incumbent party to shrug off not just one, but both a stock market crash and a recession in an election year. However, I certainly have my doubts. 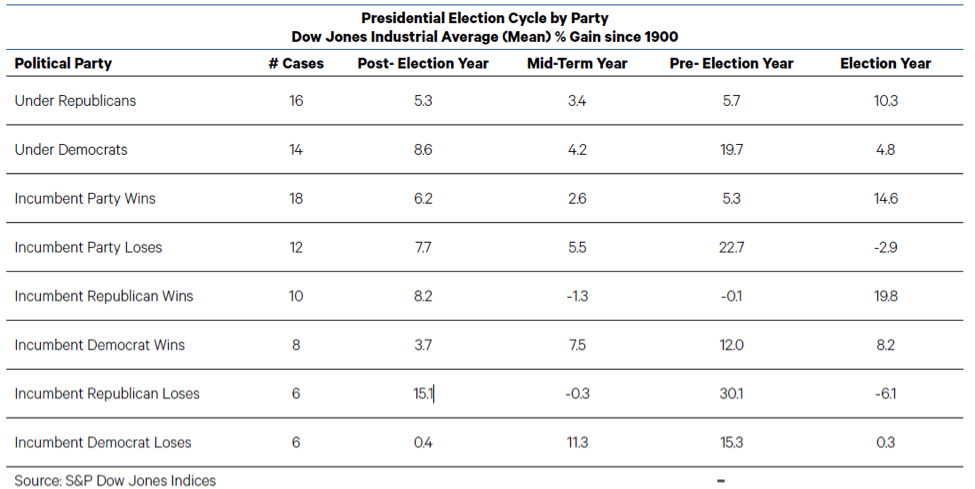 I’ve tried to impress upon investors not to bail out of the stock market due to ideological fears. I mean, you’ve probably got a whole host of reasons to sell your investments, but don’t pick that one. It can be difficult not to get emotional about investment decisions, and those emotions run high when you believe that the investment world might unravel if your party loses. Hopefully, this will help you decide what to do based on historical data instead of distaste or distrust of your political opponents. Don’t let the party you hate force you to get less than you deserve. Don’t give them that win.