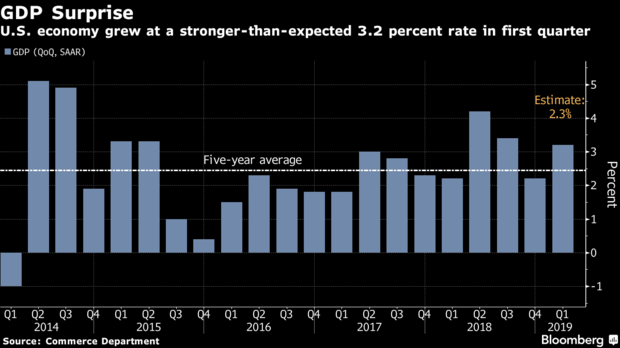 Dalton — The U.S. economy went from stalled out in the first couple months of the year to a rapid recovery in the month of March, with the advanced estimate of U.S. GDP for the first quarter coming in at 3.2 percent last Friday. That’s the best first quarter in four years, and well above the consensus. I’m not going to spend much time on those numbers as they’re now five days old and have been well-covered over those days. However, it’s worth mentioning because, last week, I explained that I was becoming nervous about where the stock market was trading and that a correction was likely. However, I also said to “suck it up” as 1) volatility is the cost of doing business in the stock market; and 2) it won’t be the type of long or large drop in prices that warrant selling equity positions. I’m all for getting more defensive when the time comes, and that’s a big part of my job—trying to figure out when that time has come. This latest GDP reading is just another reason to support my advice of staying the course. We’ve got more time before the next big one comes.

I hope you trust my advice, but I admit that I’ve always been a follower of the “trust but verify” flock. It’s been my experience that if you’re trying to verify information from someone, you shouldn’t also rely on them to present the verification. I mean, you wouldn’t want a detective investigating their own alleged wrongdoings. So I’m going to go ahead and give you a sense of what some other professional investors are saying.

Barron’s conducts two surveys of professional money managers per year—in the spring and the fall—for its Big Money poll. Of the 148 respondents to Barron’s spring Big Money poll, only 49 percent are bullish on the stock market over the next 12 months. That is down from 56 percent from the fall 2018 survey; the percentage of bulls hasn’t been below 50 percent since the fall 2016 survey. The number of bears more than doubled from last fall, jumping from 9 to 16 percent (the rest are neutral). I’m getting more bullish while some other professionals are getting more bearish.

For those polled, the most important factor in determining a bullish or bearish opinion on the stock market was whether or not we’ll slip into a recession soon. According to my colleagues, 44 percent see a recession hitting in 2020, and 32 percent in 2021. That’s two-thirds who think the U.S. will see a recession within the next two years. You can count me among them. I suppose that makes me odd—I expect a recession in the next couple years but I am still holding onto equities. Am I channeling my inner William Prescott and advising “don’t’ fire until you see the whites of their eyes”?

I know the horrible track record of the most educated and most tenured economists, those with the biggest teams and most relevant and timely data. And, quite frankly, we’re terrible. Even Alan Greenspsan, former Fed chairman—the Maestro—estimated only a 1-in-3 chance of a recession in May 2007. By September he upped the odds to closer to even. Three months out from the biggest recession in nearly a century, one of the greatest economists that ever lived only gave it a 50/50 chance. On the flip side of that, there are investment advisors who run a whole lot more than my measly half-billion dollars, and even as we were months into the Great Recession, many of them were saying that the stock market was overreacting and pointed to all the good economic news that was out there—“no way we’re in a recession,” they collectively said. But it’s not about a good or bad economy. It’s never about good or bad; it’s about better or worse. It’s called a peak for a reason—it always looks great before it gets worse.

My tools aren’t better than anyone else’s. Despite what my momma says, I know I’m not special. But I am self-aware, and aware of how we money managers and economists can be far too confident in our own assessments despite our awful track record of predictions. I try to remember what Neil Armstrong said: “We tried very hard not to be overconfident because when you get overconfident, that’s when something snaps up and bites you.”  I don’t try to or need to be overly confident in my predictions. I set a path based on what I think is the most likely scenario, but I allow myself to change my mind when information changes. Currently I am bullish on the U.S. equity market, but according to the Barron’s Big Money poll, less than half of my colleagues are bullish and a growing number are outright bearish. I need to recognize that I could be wrong about being invested in the stock market. And although I am part of the two-thirds that expect the U.S. economy to take a hit within the next two years, I am reluctant to sell our equity position now. To be sure, I’ve seen evidence to argue for a coming recession, but a lot of it is still what my gut tells me. My intuition is important, but it’s not evidence so, for now, I wait until I see the white of the eyes of a stock market crash. The stock market embodiment of those whites isn’t the price. It isn’t what you see; it’s what you don’t. It’s the internals, such as how many stocks are doing well versus how many aren’t, even while the stock market averages are going up.

The aggregate of our favorite metrics tracking the economy and the stock market are good and getting better. For example, as of Friday, April 26, more than 500 public companies had reported their first-quarter numbers for this earnings season, which gives us a large sample size to start analyzing overall trends. Sixty-seven percent of companies that have reported this season have beaten bottom-line consensus EPS estimates. That’s a strong reading relative to the historical average of roughly 60 percent for the last 20 years. Also, it looks as if the two-quarter period of weak corporate earnings guidance might be coming to an end. So far this season, the guidance spread (the percent of companies raising guidance minus the percent of companies lowering guidance) is just touching positive territory. That’s still better than the last two earnings seasons, which both saw negative spreads (again, better or worse is more important than good or bad).

The problem, however, is that there is a disconnect between the relatively weak pace of positive economic surprises and the strong V-shaped recovery in stock prices, which quickly erased all last years’ losses. The disconnect is not surprising since weaker economic news means the Federal Reserve will hold off on its interest rate hikes. This creates a “put” in the market, meaning risk is reduced because the Fed has shown it’s sensitive to global stock market movements thus, all other things equal, investors are more likely to hold stocks. Frankly, I don’t expect that negative correlation to be sustainable.

Said disconnect notwithstanding, hold your equity positions, accept the pain of the coming correction and survive long enough to forget all about it. A near-term pullback would be healthy and allow investors holding cash to get back into the stock market if they are underweighted. However, if you are now holding an outsized allocation of equity relative to your financial plan, now is a good time to rebalance back to the allocation required to achieve your intended outcome.