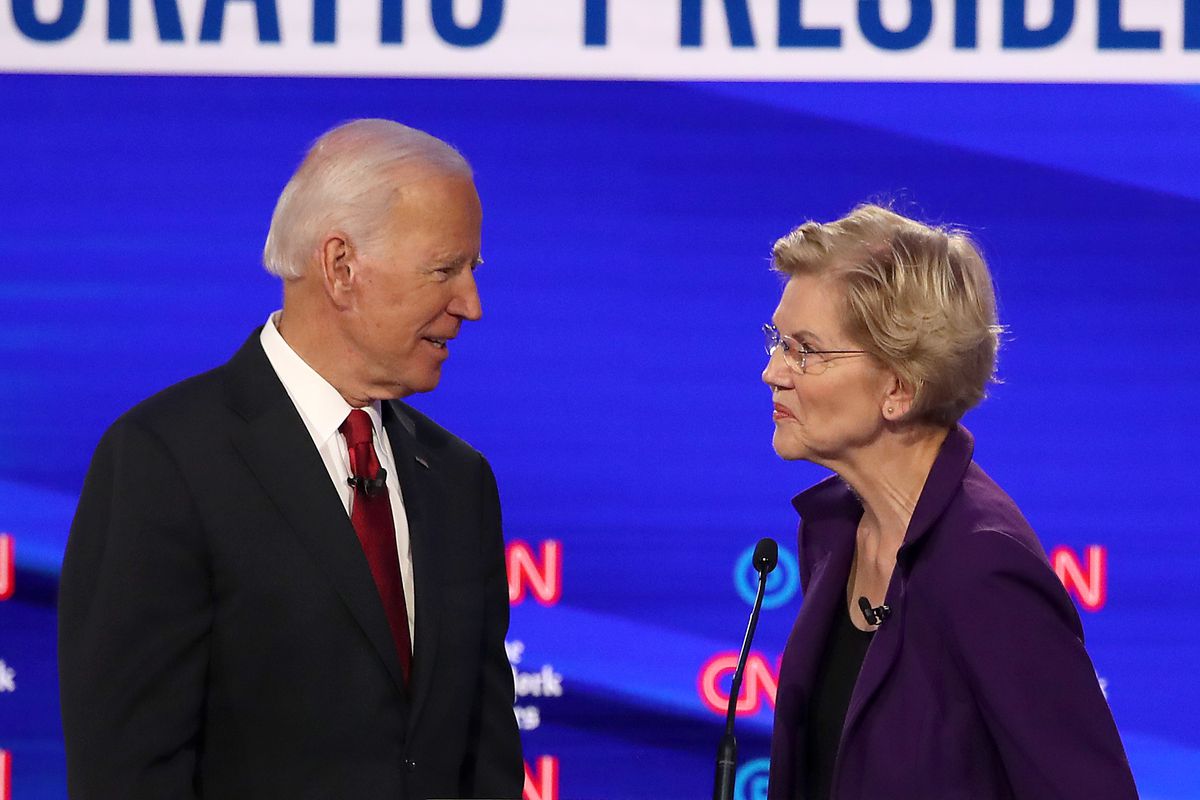 Dalton — A month ago I reported on Sen. Elizabeth Warren’s plan for Social Security. Without going into the detail of all the caveats and admissions of my political persuasion (I am an independent) or as to why it’s important to you (Democratic primaries will start as early as four months from now: March 2020 for Massachusetts), let’s do the same for former Vice President Joe Biden’s plan for what has been referred to as the student loan crisis. Like my report on Warren’s social security plan, for the sake of brevity, I’ll provide a summary. For the full scoop, you can visit Uncle Joe’s website.

My summary will be focused not on the subjective definition of “fairness,” but on the objective consideration of economic impact. I’ll be the first to warn: Be wary of political opinion disguised as economic objectivity. Granted, it’s not uncommon for people in my field to have varying interpretations of data. Harry Truman said, “Give me a one-handed Economist. All my economists say ‘on one hand . . .’ then ‘but on the other . . . ” Yeah, we can be a wishy-washy group, that’s for sure. And maybe my bias makes me too forgiving of my two-handed colleagues. What I cannot forgive is when someone calls themselves an economist and presents data to support an ideology. It happens a lot. That’s not just a ranting digression. It is important that you know I am aware of these human flaws so that you know I’m not afflicted by the same limitations. Sometimes differing interpretations are not as sinister as I may make them out to be. Sometimes we’re just subjected to our own subconscious biases. This assessment is devoid of ideology.

Getting student debt right has important implications for the U.S. economy. I didn’t decide to write this column because the Democratic primaries are coming up (that just makes it timely). I decided to write this column after I read a 32-page document from the Federal Reserve Bank of Philadelphia called “The Impact of Student Loan Debt on Small Business Formation.” I’ll spare you all that (it’s brilliant, but probably boring to most people), but the gist of it is that there is evidence that growing student loan debt is stalling the start of small businesses — bad for the economy. Also, student loan debt is causing younger people to delay marriage and having children, which, in economics, is referred to as slower “household formation” — bad for the economy. Also, student loan debt has played a role in reducing home ownership for young adults — also bad for the economy.

Easing the pressure on those with student loan debt will better support the U.S.’ economic growth rate over the longer term, as will the assurance of continued access to higher education. A country that stops learning starts dying. Here are some of the facts we need to deal with and that Biden’s “Beyond High School” plan addresses in a way I can support, even though it will punish my paycheck:

It was easy for me to accept that Biden’s plan will work, because he’s not trying to be too creative. He’s merely taking some of what has worked and scaled it up. Specifically, Biden plans to expand the existing Revised Pay As You Earn, or REPAYE, program. This income-based repayment program has borrowers pay 10% of their discretionary income (I’ll spare you the formula) to pay federal loans. The Biden plan changes the formula and the percent of discretionary income so that the typical REPAYE borrower will save $2,000 per year in student loan payments. Also, the Biden plan addresses the private lending market by expanding loan forgiveness for bankruptcy filings as well as allowing up to $10,000 of annual debt relief per year for up to five years of community or national service. That would save those borrowers an average of $375 per year (a lower annual rate due to relatively low expected participation). From 2021 to 2030, the estimated cost is about $300 billion.

The cost of the Biden plan will be paid for in two primary ways. First, if you’re in the 28% or higher federal income tax bracket, your itemized deductions will be capped. In an effort to simplify the tax code, the IRS allows for a standard deduction, which is the amount you can claim against your income without having to scrape up all your receipts to show you spent your money on deductible items (currently $12,200 for a single filer and $24,400 for married filing jointly). High-income earners would be penalized the most by this because they tend to have more expenses that can be deducted, and a lot of those deductions will disappear. Second, Biden wants to get rid of the stepped-up cost basis heirs enjoy upon inheritance. Capital gains from the sale of inherited assets are treated differently from what you’re more used to as an investor who buys and sells something during their natural life. Getting rid of the stepped-up cost basis severely hurts wealth management firms like mine that add a lot of value to clients who need to figure that out. And, of course, it hurts the (presumably) wealthy inheritor.

Despite being personally beat up by Biden’s proposed plan, I see the merit in it for the aggregate economy. The borrower has more cash to spend. And although that is offset by the amount of money the wealthy will lose, aggregately lower-income households will spend more of their savings than the wealthier will reduce their spending. It’s a small net positive over the first decade, to the tune of a couple hundred billion dollars relative to a nearly $20 trillion economy. And while I acknowledge that it’s theft (legislation is being used to take my money instead of a gun), I’d support this. If something isn’t done, preferably something like Biden’s plan that doesn’t add to the national debt, then sometime far too soon, our high-school students will turn away from college education because of the heavy debt burden. Once that happens, I don’t think it’s hyperbolic to argue that it will be the beginning of the decline of Western civilization. Not an apocalypse, but a less-educated workforce is inarguably a decline.

What will the Fed do next?

It’ll cut rates, that’s what it’ll do. At least, that’s what the federal funds futures market would have us believe, since it assigns an 85% chance that the Federal Open Market Committee will reduce the federal funds rate from a range of 1.75%-2.00% to 1.50%-1.75% at its Oct. 30 meeting. I could make an argument for not cutting, but it’s hard to believe the Fed would intentionally disrupt the capital markets’ expectations to such an extent. Additionally, Federal Reserve Vice Chairman Richard Clarida, who gave a speech Friday, Oct. 18, passed on any opportunities to walk back expectations of any cut. Interestingly, that will bring the federal funds rate down to roughly match the yield on the U.S. 10-year Treasury, now that the yield on the 10-year note has rallied.

The rallying yield of the 10-year note has moved the yield curve out of inversion. For nearly four months, the three-month Treasury bill was yielding more than the 10-year Treasury note, and I have warned that’s a harbinger of a recession. Typically the longer maturity bonds yield more, but when expectations on the economy sour, investors tend to buy more long-dated maturities out of fear, which pushes the long yields lower than the short yields. A lot of people pushed back on my warning, arguing that the two-year rate versus the 10-year was a more important comparison. Whatever. Fine. That eventually inverted, too, in August. Since 1978 there were five 2-10 inversions and they all eventually led to a recession, on average, 22 months later (that would be June 2021). The stock market doesn’t turn down until, on average, 18 months after 2-10 inversion (that would be February 2021).

Those may just be averages, but it’s comforting that we may have some more time to play in the stock market before we need to bail out. And at some point, we’ll need to do that. The bond market moving out of inversion is not a sign recession will be avoided. Over the last 40 years, when an inversion predated a recession, there was only one other time, in 1998, when the yield curve didn’t un-invert prior to the recession.

And what does the Fed think of the probability of a coming recession? 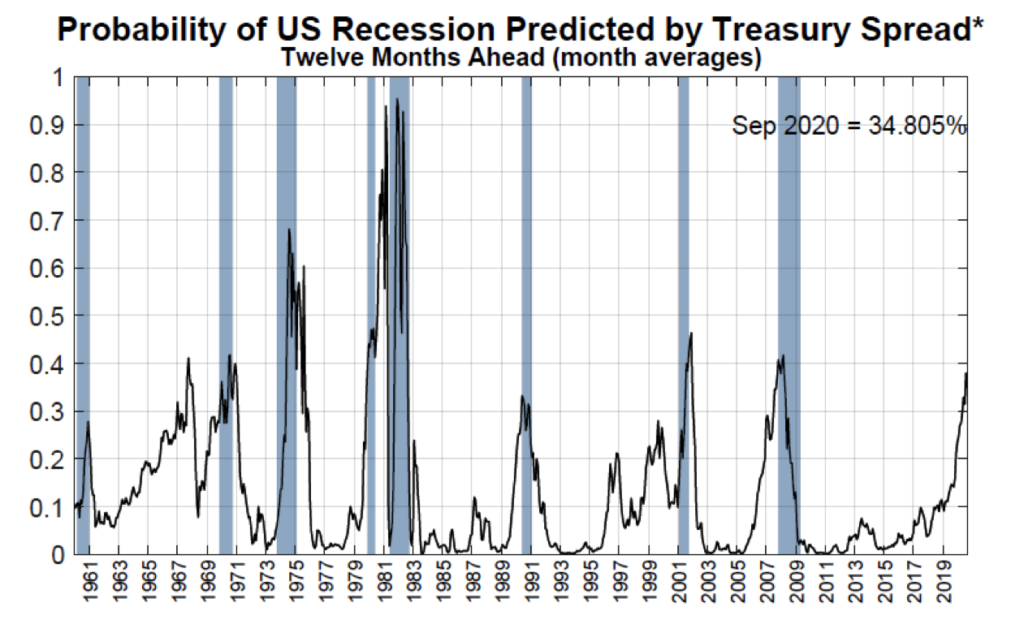 The New York Fed’s recession probability model, depicted in the graphic above, presents recession probabilities for the next 12 months as about the same as the probabilities that preceded each of the three recessions of significance since 1985. If you invest in the stock market, it’s just stupid to ignore the writing on the wall. Buy-and-hold is one thing and it almost always makes sense, especially if you don’t know what you’re doing. But stock market losses during a recession can wipe out about one-third of your portfolio. There is no award for bravery given to those who ride out such losses. Stay invested for now, as I’ve been saying. But I’ve also been saying to take opportunities to make small de-risking efforts in your portfolio in case the big swoosh down comes out of nowhere. A little protection can go a long way.