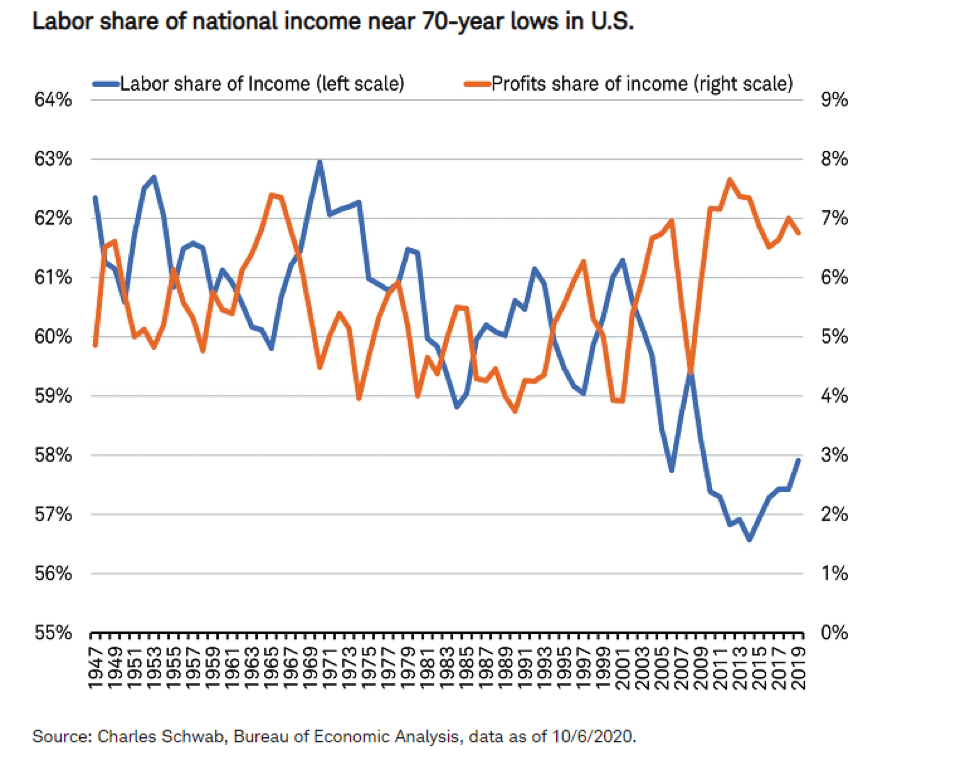 Dalton — A few weeks ago, I vetted the probabilities of how the upcoming U.S. presidential election could play out. The most likely scenario was that Vice President Biden would win the White House and Congress would stay the same (Republican Senate and Democratic House). The third most likely scenario was the proverbial “blue wave,” in which Biden wins, the Democrats keep the House and take the Senate.

Online betting odds suggest that a blue wave is more likely than I had considered at the end of September. Those odds say that there is a 60 percent chance of a blue wave, up from 47 percent a few weeks ago.

We usually can’t rely too much on election outcomes to make significant shifts in our portfolios. There is no discernable pattern to follow. Following the 2016 presidential race, some of the initial biggest winners were financials, industrials, energy and materials. Following the 2000 election, defensive sectors like utilities, health care and utilities did better. The point is that there are factors other than who is president that affect the stock market.

Nonetheless, it’s worth the time to consider the blue-wave scenario. Of all the possible outcomes, this implies the largest potential changes to the legislative environment for companies. That could impact both domestic and international markets.

I realize that if it weren’t for 2016, we’d all be guaranteeing a Biden win. In 2016, voters were sure former Secretary of State Hilary Clinton would win the presidential election — until she didn’t. We thought Clinton was a shoo-in because of polling.

Starting in 1936, Gallup was the first organization to conduct what was considered accurate polling for U.S. presidential elections. It missed some close elections, for sure. Still, Gallup’s typical accuracy argues that we should be less skeptical than we are of polling. According to RealClear Politics (which aggregates polling), Biden is up 9.2 points nationally versus President Trump and up 4.9 points in battleground states. RealClear Politics sees a net change of four Senate seats to 51 Democrats. The polls, like the online betting odds, favor a blue wave.

The stock market seems undecided. From the end of the Democratic and Republican conventions to the day before the election, the Dow Jones Industrial Average has gained a median of 5.7 percent when the incumbent party has won. The Dow has slipped 1.4 percent when the incumbent party has lost. That performance has predicted three-quarters of the previous 30 elections. Currently, the market is about flat since Aug. 27, the last day of the Republican convention, which feels like a Trump loss. However, it was up about 10 percent for the month before Aug. 27, which feels like a Trump win. Let’s call it a wash, which is more helpful than it sounds because it doesn’t negate the polling.

However, there are lies, damn lies and statistics. Since 1928, the incumbent party has won the White House 90 percent of the time when the S&P 500 is up in the three months before the election. Anything can happen between now and Nov. 3, but the S&P 500 is currently up almost 6 percent (since Aug. 3). The stock market is giving better odds to Trump than the pollsters are, which is why I hesitate to make big moves now.

Market historians will point out that the stock market does better under a Democratic president. Under Democrats, the Dow Jones Industrial Average rises an average of 7.8 percent per year, compared to only 3.3 percent under Republicans. (For those who appreciate nuance, that gap narrows to 3.8 percent and 1.1 percent, respectively, when adjusted for inflation). But don’t get too excited about riding the blue wave just yet. When Democrats control the White House and Congress (a blue wave), the average annual return for the Dow is only 3.0 percent, compared to a 7.1 percent when the Republicans control it all.

Granted, those are only averages. And let’s face it: It’s hard enough to forecast the stock market’s returns without a political monkey wrench to consider. However, it’s not as if a Biden administration would be doing an awful lot to directly help the stock market. Biden would do some things that would hurt the stock market. For instance, he’d raise corporate tax rates (the public companies you invest in) and raise taxes on dividends and capital gains.

The popular nonpartisan math is that the massive amount of spending following a blue wave would offset the deleterious effect Biden’s plans would have on the stock market. That even includes offsetting my biggest concern: Biden’s proposed capital gains hike. Admittedly, maybe I am more scared than I ought to be. Following capital gains hikes in 1986 and 2012, instead of a crash, the stock market “only” suffered drops closer to 5 percent. Investors took a one-off approach and sold appreciate stocks prior to when the new tax plans took effect.

A blue wave would force me to take another look at holding technology stocks. I own more technology stocks than may be prudent. It’s served me well, but it’s risky. Both parties have lashed out against large technology companies. Democrats appear more insistent on regulating, taxing and breaking up those tech companies.

Democrats also have a progressive labor agenda and could push for higher minimum wages and other employee protections. If you think about it, the total share of national income is split into business profits and labor’s share of that income. Labor’s share of national income is at a near 70-year low, as business profits have been rising for the last decade or two.

A blue wave could lead to legislation that reverses the U.S. trend of labor’s falling share of income, which could drag U.S. companies’ profits. This could make foreign equities more attractive. I’ve had very little direct foreign equity exposure for quite a while. I’m pleased about that, as those stocks have dramatically underperformed those of their U.S. counterparts.

Should Biden get rid of Trump’s 2017 Tax Cuts and Jobs Act, that may also be another reason to look at foreign equities. The TCJA cut corporate rates from 28 percent to 21 percent, which moved the U.S. effective tax rate to the middle of the range of its global competition. 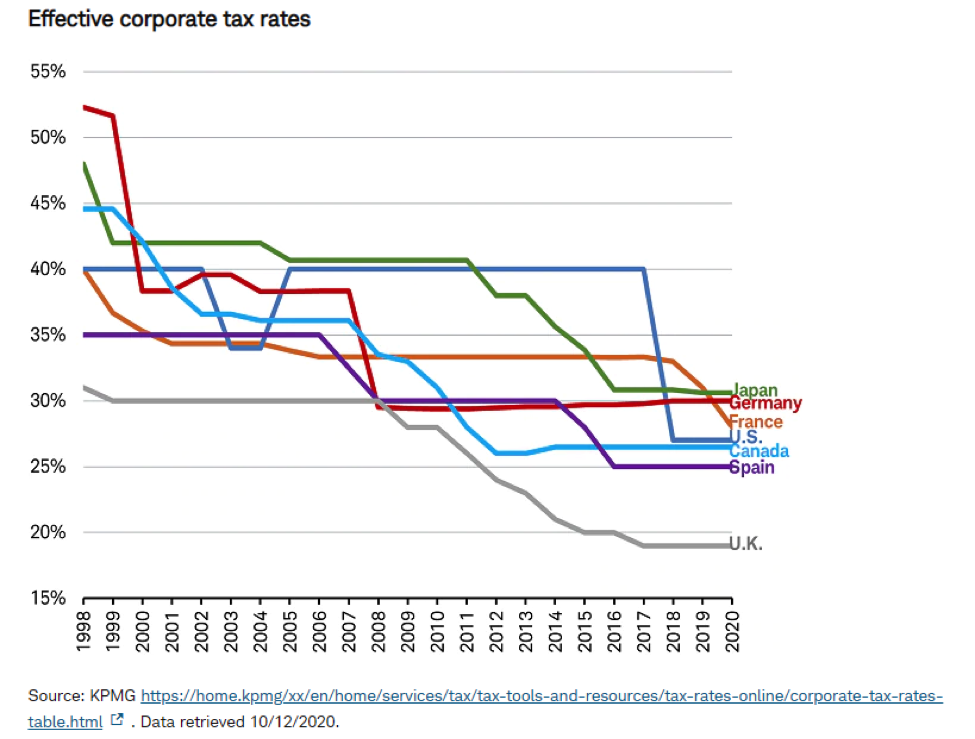 Assuming the tax rates of other developed countries remain stable, removing the TCJA could cause U.S. stocks to underperform foreign stocks.

I hold health care stocks and have been happy with them. They’ve done what I have wanted them to do: Reduce portfolio volatility while still adding gains to my portfolio. I’ve been nervous about holding them because both parties wish to lower drug prices. (Of course, the health care sector is comprised of more than the just drug stock subsector.). A blue wave could reinforce the durability of the Affordable Care Act (a k a Obamacare). In contrast, under a Trump re-election, its repeal could reduce the number of Americans with health care insurance coverage. That would be negative for health care spending overall and particularly bad for some subsectors.

A blue wave could cause me to reduce my technology exposure, increase my foreign holdings and hold my health care stocks. I’ll let you know if I make those changes.

Allen Harris is the author of ‘Build It, Sell It, Profit: Taking Care of Business Today to Get Top Dollar When You Retire,’ as well as the owner of Berkshire Money Management in Dalton, managing investments of more than $500 million. Unless specifically identified as original research or data-gathering, some or all of the data cited is attributable to third-party sources. Full disclosures: https://berkshiremm.com/capital-ideas-disclosures/. Direct inquiries to aharris@berkshiremm.com.