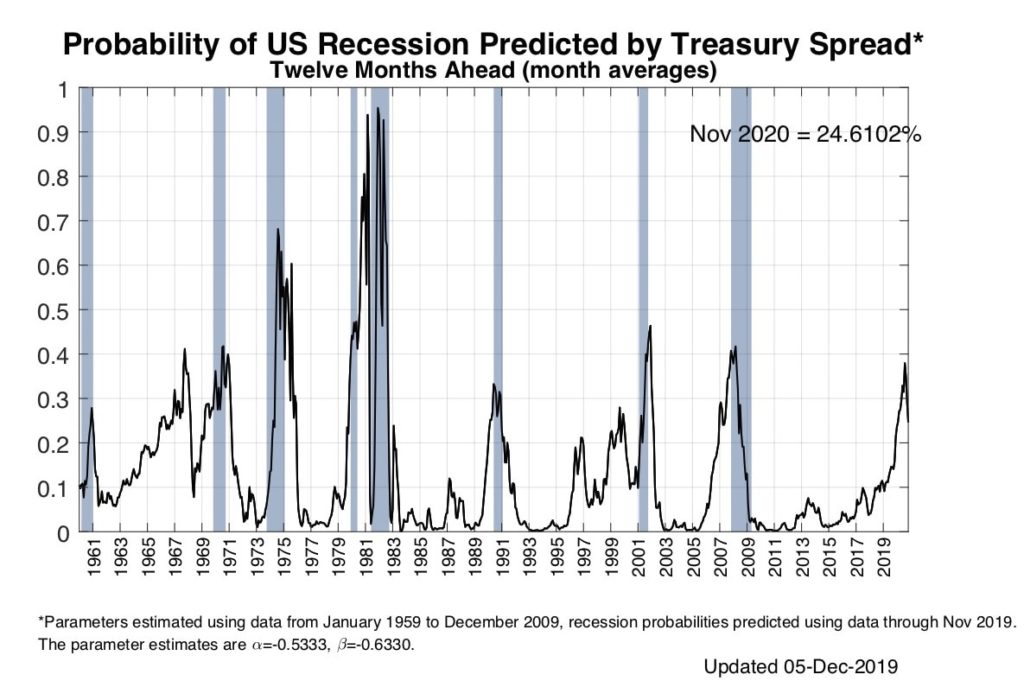 Dalton — The probability of a U.S. recession, as measured by the New York Federal Reserve’s Treasury Spread ratio, has dropped from a high of 37.93% in August back down to 24.61% for November. Reaching 37.93% brought the ratio into the dangerous 10th percentile of highest, riskiest ratios. If there ends up being an economic contraction, that is the highest it has ever gotten since 1967 without going into a recession within the next 12 months. The ratio was well within the range of, if not higher than, past ratios prior to all other recessions in the last 30 years. A receding ratio doesn’t give an all-clear signal, but it does comfort me a bit. I continue to be anxious about the probability of either a 2020 recession or a 2020 stock market crash that “predicts” a 2021 recession.

Anxious as I may be, I know that I must be flexible in my thinking, and data is more important than fear. Although the data still scares me, I’m seeing more signs of relief. For instance, the Duke CFO Business Outlook survey showed that optimism about the U.S. economy rose 4 points to 66 for this quarter, its highest level in more than a year. Compared to the previous quarter, CFOs raised expectations for earnings, capital expenditures, employment and wage growth throughout the next 12 months. Again, although data is improving, the data still scares me. Just over half of CFOs expect a recession to start by the end of 2020, and 76% expect one by mid-2021. Predictions by themselves mean very little. However, the report noted that most CFOs are taking active steps to prepare for a potential slowdown, such as cutting costs and paying down debt, and scaling back or delaying capital expenditures. Predictions can become self-fulfilling prophecies.

Recently, the stock market has been shrugging off the CFOs, and my, concern about a looming recession, not just in the form of new highs in the major U.S. stock market indices but also in the composition of investor buying and selling. Over the last month or so, investors have been shifting from conventional safe-haven plays — gold, the Japanese yen, and dividend-paying stocks like those in the utilities and real estate sectors — and into technology and financial stocks. The Fed and the White House have, temporarily, redefined what safe-haven investments are. I tend to stay away from Japan, even its currency, because the economy has been difficult to forecast since the late 1980s. And gold is only useful if there is an apocalypse and you need to trade a small bag of it at the border to barter for sanctuary. Or whatever. It’s just a weird investment because you’re always looking for a greater fool to buy it from you at a higher price; its value isn’t tied to anything fundamental. I do, however, have an allocation of dividend-paying stocks, with a tilt toward utilities and real estate. More specifically, I’ve accomplished this allocation through so-called “low-volatility” exchange-traded funds. These low-volatility investments have been relatively big winners over the last year, so I’m not yet worried about a six-week shift of underperformance. After all, being diversified means always having to say, “I’m sorry.” In a diversified portfolio, something is always lagging something else, so I’m not about to chase performance. Although we’ve had the luxury of good performance from these types of investments, their purpose has been protection of capital, not performance. For nonaggressive investors, I will continue to recommend an allocation of non-dividend-paying stocks.

Using the threat of a U.S.-China trade war tipping the U.S. into a recession, the White House bullied the Federal Reserve into cutting interest rates three times. Last week the Federal Open Market Committee (the Fed group that sets interest rate policy) declined to lower rates further, leaving the Federal Funds rate at a range of 1.50-1.75%, down from 2.25-2.50% at the start of the year. The already low rates, coupled with the Fed’s decision to hold them steady, nudged investors from cash and bond positions to equities. Holding current interest rate levels will likely be the baseline case for some time as the Fed has stated that it is willing to let the economy grow, allowing for more wage growth and more inflation.

Then, and I couldn’t make up the timing of this, on Friday, the White House announced that, according to U.S. trade representative Robert Lightizer, the first phase of a trade deal is “totally done” after a year and a half of battling. The two countries intend to sign the partial accord in the first week of 2020, with, among other things, China agreeing to purchase billions of dollars in agricultural goods from the U.S., and the White House agreeing not to pursue a new round of tariffs that were to be enacted this past Sunday.

Now we have a situation where interest rates are incredibly low, and there is improvement on the main thing that was holding corporations back from capital expenditures. It’s hard to make a nonpolitical argument about why the stock market, in the short term, will have to endure anything worse than typical correction.

If the economy, buoyed by low interest rates and an improving trade landscape, will support stock prices, it’s probably politics that will cause any sort of significant correction. If there is a full rescinding of the 2017 corporate tax cuts, which is likely if Democrats take the presidency and both chambers of Congress, then S&P 500 earnings would be immediately lower by about 12%, according to calculations from Goldman Sachs. That political move would likely lead to a correction greater than the garden-variety pullback. (Before you send me an email defending or damning one political party or another, don’t — I’m talking math, not ideology.)

But what about the impeachment?

On Friday the 13th, the House Judiciary Committee voted to advance two articles of impeachment against President Trump for allegedly abusing his position to strike a quid pro quo with the Ukrainian government, and obstructing Congress. Next, this goes before the House of Representatives and requires a simple majority vote to pass (which I suspect will happen). For Trump to be removed from office, two-thirds of the U.S. Senate must vote to convict him of those articles of impeachment (which I doubt will happen). Who cares? Again, spare me the emails loaded with political ideology. We’re talking about your money here. On Oct. 2, I wrote a column on the subject of protecting your money in the face of impeachment. That October column could have been summed up with those two words: “Who cares?” Regarding your money, I feel the same way today.