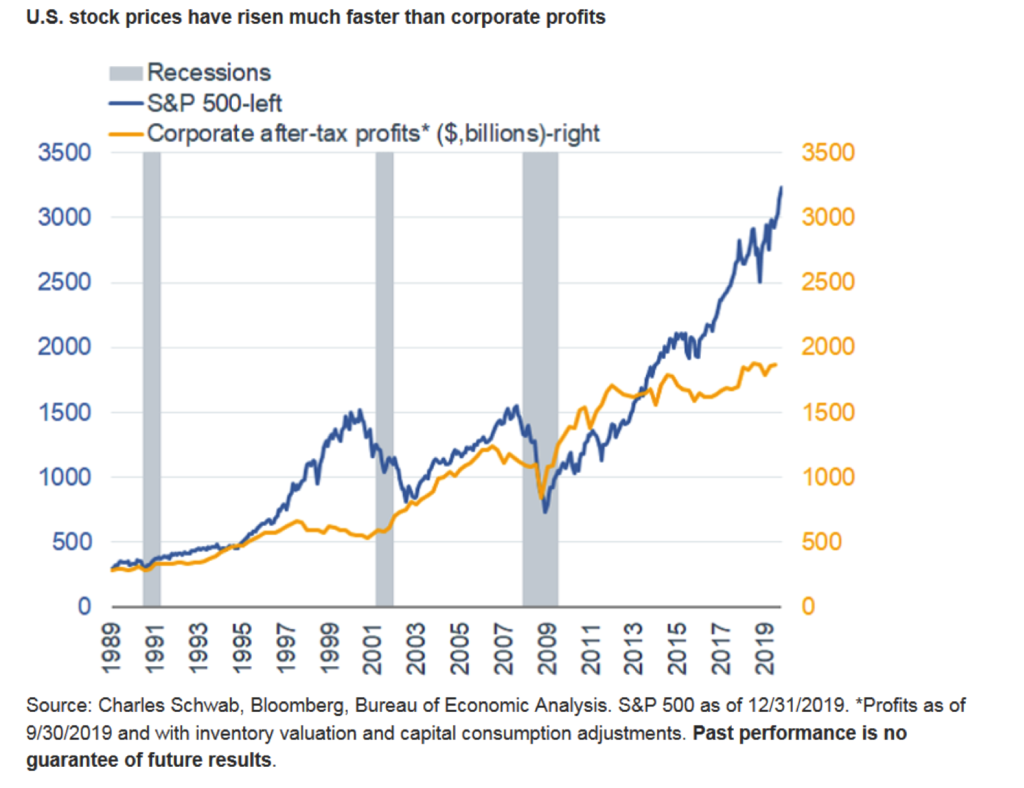 If you’ve been in the business for a while, knowing that the market is overbought is a bit of an art form. You can practically feel it. However, I like to think of myself as a man of science, so let’s back up my gut feeling. Since the Oct. 2, 2019, lows, the S&P 500 is up about 15 percent, which is nearly a 50 percent annualized return. As of the close of the market on Friday, the stock market was up almost 3 percent, which would be something like an 80 percent annualized return. A couple weeks ago, I said that, “This market melt-up is nearly done; we could get a few more percentage points of gains into January, some mild pullback to the market’s 50-day moving average.” A “few more percentage points” would have put the S&P 500 at about 3,350-ish points, and we’re pretty much there right now. I don’t know if the market temporarily stops its advance from here, or more closely replicates the market melt-up of January 2018, which would elevate the index to about 3,475 points on or about Jan. 26, 2020 (the peak of the 2018 melt-up was Jan. 26).

Perhaps not so coincidentally (because there is a reason technical trading exists), the S&P 500’s analyst consensus 12-month forward price target is just about that level (technically 3,468 points, which is pretty darn close to 3,475 points). The price of an index today compared to the price target 12 months out is called the price-to-target ratio. Today, the price-to-target ratio is in its bottom 10th percentile of all other times since 2004. There have only been two other periods since 2004 when the S&P 500 was currently trading at levels so close to 12-month forward estimates. One was on the first trading day of the year, Jan. 2, 2020, which makes sense since the market was high and analysts didn’t yet have a chance to update the targets they made in December 2019. And the other time was Jan. 26, 2018: the climax of the 2018 melt-up.

So, the stock market is overbought. But I don’t think it’s poised for disaster. In other periods when this price-to-target ratio was in its bottom 10th percentile, it underperformed relative to all other periods for the next month, three months and 12 months by 3.02, 3.65 and 1.12 percentage points respectively, which means that the short-term excess we’re enjoying now in the form of high stock prices will likely lead to something like that correction to the 50-day moving average (which is about a 4.5 percent drop from current levels), but that being overbought won’t necessarily lead to disaster or even long-term dramatic underperformance.

Oh, and another reason the stock market isn’t poised for underperformance is because the Fed doesn’t care much about inflation right now. The Fed dropped the federal funds rate three times in 2019, to a range of 1.50-1.75 percent, and Fed Chair Jay Powell said in October 2019 he’d need to see a “really significant move up in inflation that’s persistent before we would even consider raising rates to address inflation concerns.” More recently, in the Fed’s minutes of its Dec. 10-11, 2019, meeting, officials “warned about the macroeconomic consequences of not achieving 2 percent (inflation) on a sustained basis.” Let’s think about what that means for the Fed, that has a dual mandate to promote growth and fight inflation. The Fed’s preferred method of measuring inflation is the personal consumption expenditure price index, which was at 1.4 percent in October 2019, compared to the Fed’s stated target rate of 2.0 percent. The next release of the PCE is Jan. 31, but the previous month was only 1.5 percent. If the Fed is going to let inflation run a little hotter than normal, which I suspect it will be comfortable with, that means it can focus on its growth mandate and can allow monetary policy to remain accommodative for longer. The market has been prodded higher by monetary stimulus and the virtual promise by the Fed to keep rates lower for longer has given the U.S. economy the potential to stave off a recession for all of 2020.

A signal of an upturn in global industrial growth has been an upturn in sensitive industrial material prices such as primary metals, textiles and some building materials. The upturn has been on a positive trend, but not yet technically positive. The upturn that has been going on is less negative; it’s not even positive inflation yet. But the context is that throughout the last couple of years, there has been a tremendous drop in industrial materials pricing, so the increase over the last several months is an example of comparing better versus worse as opposed to good versus bad. It appears as if global industrial production is beginning to see some positive signs, but I don’t want to get ahead of myself. For example, the U.S. ISM manufacturing index is at a 10-year low. But perhaps it’s troughing and the firming of prices (well, the slowing of the decline) is a signal that we’re about to see a sustainable turn in the coming months. If so, we can virtually rule out a recession in 2020, and maybe even 2021, which would be even further evidence that the stock market isn’t poised for a disaster.

The Jan. 15 signing of Phase I of the U.S.-China trade deal may be what we need to see U.S., and possibly global, manufacturing inch up from its trough. Aside from helping corporate decision makers in both the East and the West have some clarity in decision making thus promoting economic activity, the deal stipulates that China will buy $77 billion in additional goods and services in 2020 and $123 billion in 2021, for a total of $200 billion. That compares to the $179.3 billion China bought in 2018. If the firming of global prices doesn’t turn out to be a signal of a bullish turn for global industrial growth, Phase I of the trade deal, combined with all of the Fed’s easing, should be enough to at least keep the U.S. out of recession this year. And that’s not even mentioning the barely discussed U.S.-Mexico-Canada agreement that was signed Jan. 16 to replace NAFTA. Despite it being an overbought market, that should be enough to keep us invested even in an expensive market, and even expecting a correction — for now.

But how expensive is the market? I’ve been having some fun pointing out all the ways in which the stock market isn’t a good buy, which is probably a bit ridiculous because I remain invested in the stock market. However, it does kind of let me stay at the stock market party long enough, and sober enough, to hopefully be smart enough to leave before we all start doing shots and end up with a hangover.

There are a lot of ways to measure valuation; most of them, but not all, are somehow tied to earnings. The S&P 500 has rocketed ever higher even as after-tax profits have enjoyed a far slower growth rate (see illustration above).

Today’s preventive medicine is the price/earnings-to-growth (or PEG) ratio. The PEG ratio formula is to take the price-to-earnings ratio we all know and love and then divide it by the growth rate of earnings. It’s considered to provide a more complete picture than the P/E ratio by factoring in earnings growth. Don’t get bogged down too much in the calculation. Even if you don’t understand it, think of it like a broken scale: You don’t need to know the exact number to know if you’re gaining or losing weight. Today the stock market is fatter in valuation than it has been since 1986 when Bank of America started tracking PEG data. Again, don’t get bogged down in the calculation, but consider perspective. Today the PEG ratio is 1.8, its highest ever. That compares to its lowest-ever level of 0.8 and its average of 1.2. At some point, either stock prices or the growth rate of earnings will have to adjust. I remain invested in the stock market celebration, but I fear at some point I’m going to have to be the adult in the room and tell everyone to take their profits and go home.

How do you stack up?

I found an updated list of average 401(k) balances and wanted to share for your own assessment:

It’s up to you to determine how comfortable you are compared to those numbers, but don’t get confident if your balance is higher. After all, as the article says, “most Americans don’t have nearly enough to sustain them through retirement.”

More by Allen Harris »
« Previous
Next » 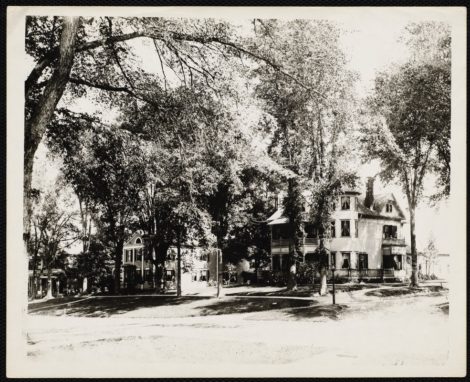 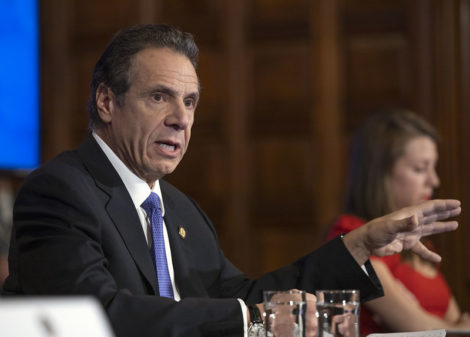 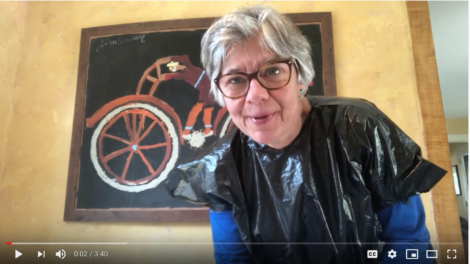 — Albert Einstein
Read next: It’s Not That Simple: Who needs affordable housing? We do.