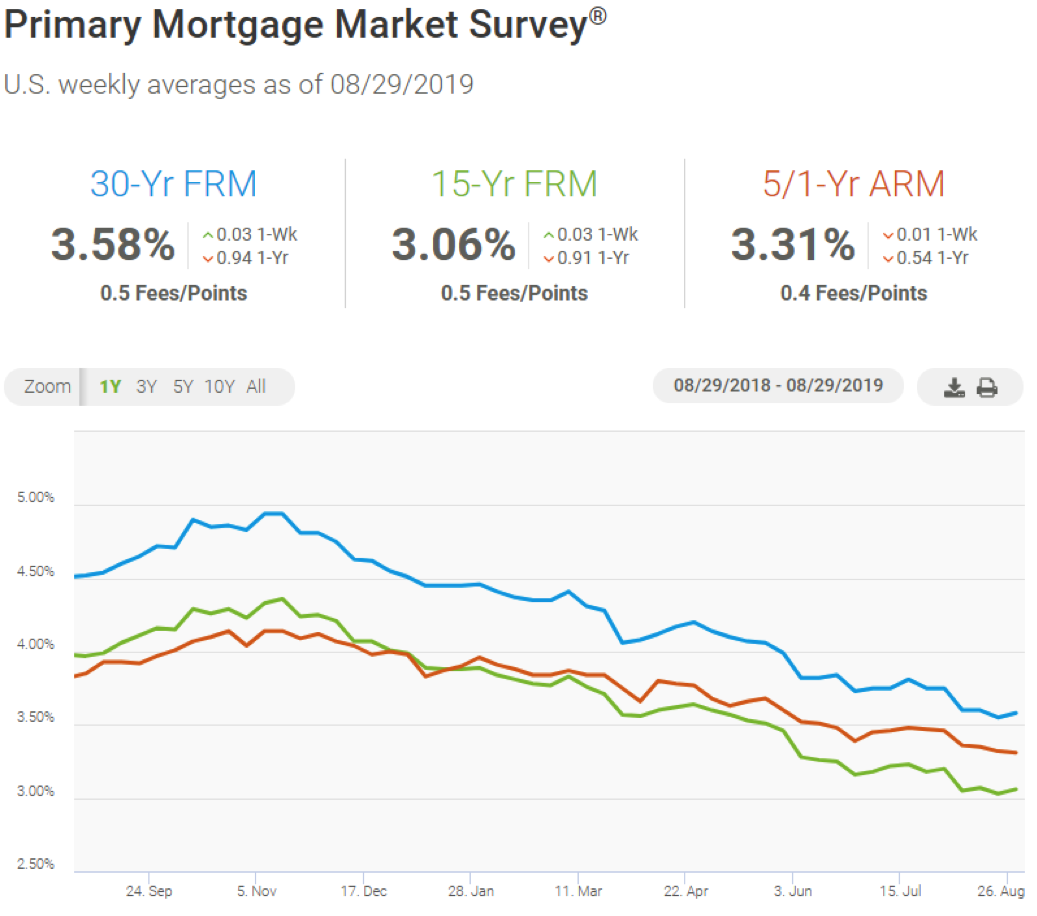 Dalton — Do you have a mortgage? Did you refinance recently? If not, maybe you should.

U.S. homeowners owe $9.4 trillion on their mortgages and an additional $4.6 trillion in non-mortgage debt, for a total of $14 trillion. The non-mortgage debt consists of, in descending order, student loans, auto loans, credit cards and home equity lines. That exceeds the roughly $13 trillion of outstanding debt in 2008, just as we were getting into the Great Recession. Readers know that I hold a rather cautious view on where the economy is heading, so you might suspect another doom-and-gloom story about the timing of the next recession. Plot twist! This is good news for the U.S. economy.

According to the Primary Mortgage Market Survey, the average 30-year fixed mortgage rate is currently 3.58 percent. Rates for the 15-year fixed and five-year adjustable-rate are even less. Rates have dropped precipitously over the last year, as you can see in the chart above.

Back in 2008, a pickup in loan delinquencies was a sign that the debt was too much for consumers in what was becoming a rapidly shrinking economy. Where the economy might go from here is another conversation, but we do know that defaults on existing debt are relatively tame, meaning that consumers are not yet feeling overwhelmed. (There is one exception: the outstanding $1.5 trillion of student loan debt continues to be a problem, but more on that some other time). Mortgage debt is currently performing well. Only 2.1 percent of mortgage holders are considered stressed, which means they would be over three months late on their payments or are in the foreclosure process. For comparison, in 2008, when mortgage debt was at similar levels, those default rates were closer to double digits. 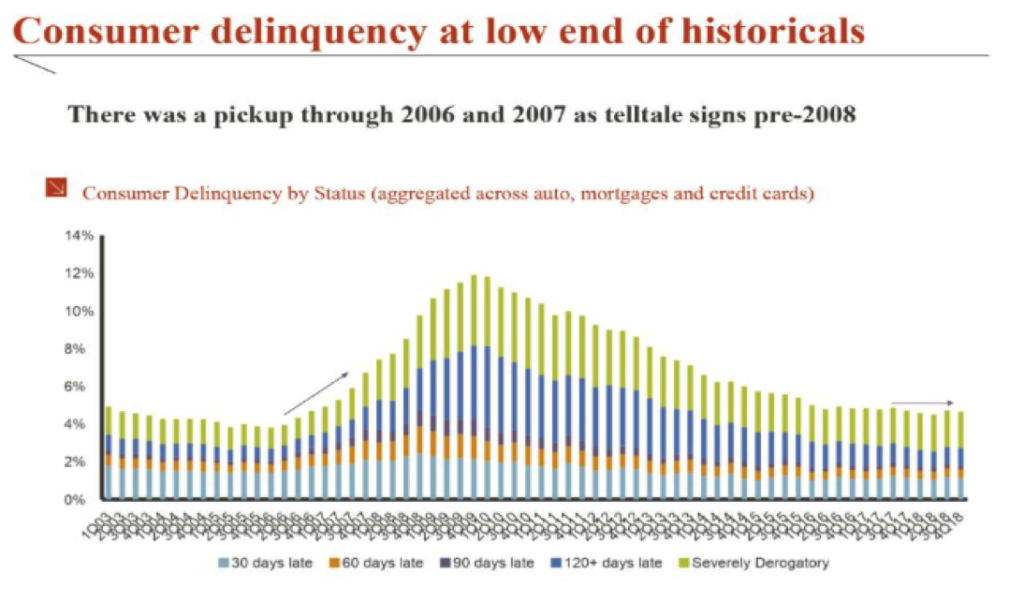 Historically low interest rates have helped consumers manage debt, and the Federal Reserve may further assist consumers by once again lowering rates at its Sept. 18 policy meeting. However, we’ve only been chatting about one-half of the ledger: the debt. Let’s give some perspective by considering the assets that are associated with this debt. The aggregate valuation of homes was $18.6 trillion in 2008. Today the aggregate home value is $29 trillion. That does make the amount of mortgage debt feel less worrisome, especially considering that, in 2008, part of the problem was the high level of underwater mortgages. Beyond mortgages, if you went back a decade and took everything that was owned by U.S. households minus what was owed, you’d get $59 trillion. Today it’s $107 trillion.

Over 90% of existing 30-year mortgages have higher interest rates than the current average. Not all of those will refinance, of course. But many will. According to Black Knight, almost 10 million households can be expected to refinance. Evercore estimates that the average borrower could save over $4,000 per year by refinancing now (suggesting that many of the refinances would be performed on higher-than-average mortgage balances). That’s $40 billion of annual savings for U.S. consumers. For comparison, the one-time total cost of the Economic Stimulus Act of 2008, a stimulus intended to boost the economy at the start of the Great Recession, was $152 billion. An annual savings of $40 billion is a substantial lift for an economy that, just last week, logged a 2 percent gross domestic product growth rate for the previous quarter, and is expected to grow at another 2 percent this quarter, according to the Atlanta Fed GDPNow estimate.

As good as GDP has been, from the perspective of giving the economy a little insurance, the timing is fortuitous. The U.S economic expansion is now in its 11th year, and it’s under threat from the White House’s year-long trade war with China. Even though the U.S. consumer is healthy and active, the trade war has brought U.S. manufacturing to the brink of recession and curtailed business investment. Globally, manufacturing is already in a recession, per the Markit World Purchasing Manager Index, as seen below (any score below 50 is a contraction). 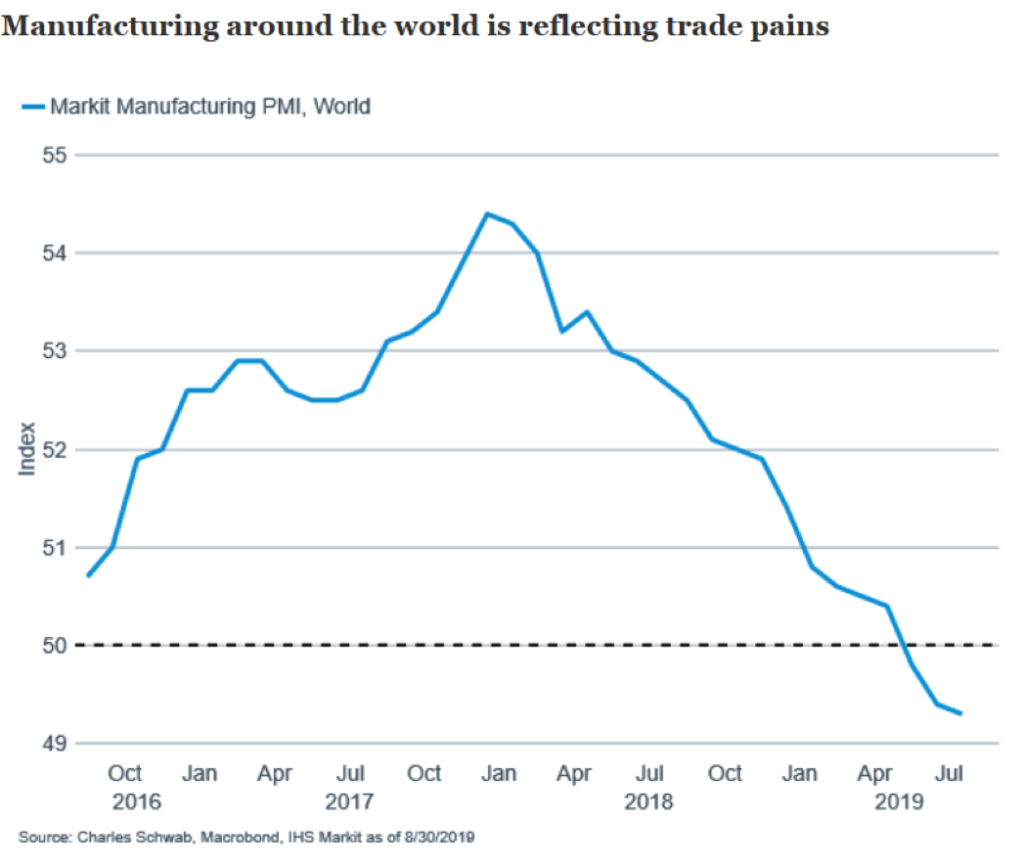 The good news is that with wages trending higher and jobless claims sitting at historically low levels, consumer confidence remains high, even if it has been dinged a bit lately. Household consumption makes up about two-thirds of overall U.S. economic output, and that grew 4.7 percent last quarter, the most since 2014. However, things have gotten so bad in manufacturing and business investment that the federal funds futures market currently predicts a 100 percent probability that the Federal Reserve will cut interest rates at its next meeting. That should bring mortgage rates even lower, hopefully keeping the U.S. economy in the positive until we have a trade war resolution and, hopefully, a corresponding resurgence in manufacturing and business investment activity.

Over the last 100 years, the Dow Jones Industrial Average has only averaged a decline in one calendar month. Hello, September. For the last century, the Dow has only been able to muster positive returns in the month of September 41 percent of the time, with an average loss of 1.08 percent. The numbers over the last 20 and 50 years don’t tell much of a different story. To be more specific, the first thee weeks of September tend to be good, but that last week can be a doozy to the downside. Looking on the bright side, after we get through September, we are into what historically has been the best three-month stretch of the calendar year for stocks. Over the last 20 years, the Dow has averaged gains in excess of 1 percent in each month of October, November and December.

While manufacturing continues to weaken and the U.S.-China trade dispute shows no sign of a resolution, the U.S. consumer continues to power the economy thanks to positive wage growth and a tight labor market. I don’t recommend trying to trade around any short-term moves, and there likely will be some to the upside and the downside in the month of September and maybe into the first couple weeks of October. But I think the current correction is mostly over. Like in seventh grade math class, let me show you my work.

During the nearly 20% decline of the last quarter of 2018, there were two days of selling capitulation, Oct. 10 and Dec. 4, as defined by them being 90% down days (trading days when 90-plus percent of both volume and prices were down). Enough days of capitulations means that everybody who will sell stocks has already sold, and then buyers can step in to pick up cheap shares. The demand after those capitulation days of the fourth quarter of 2018 could have been better. The rally from the bottom of the decline has been strong, but prices had to drop 20% before we were able to enjoy that rally.

From what, so far, has been the bottom of this most recent 7% correction, demand has been better than after the previous 20% correction. During this more shallow correction, capitulation selling has been more intense, with three 90% down days (Aug. 5, 14 and 23), and then there was a 90% up day Aug. 16 and two consecutive 80% up days Aug. 28 and 29. The market has shown a pattern of strengthening demand after recent sell-offs. There is still a chance that some trade-oriented tweets or a hard Brexit divorce can force the market to break down, but it’s looking like our portfolios will get through September and early October with a few scrapes and bruises but will heal up and end the year in better shape.