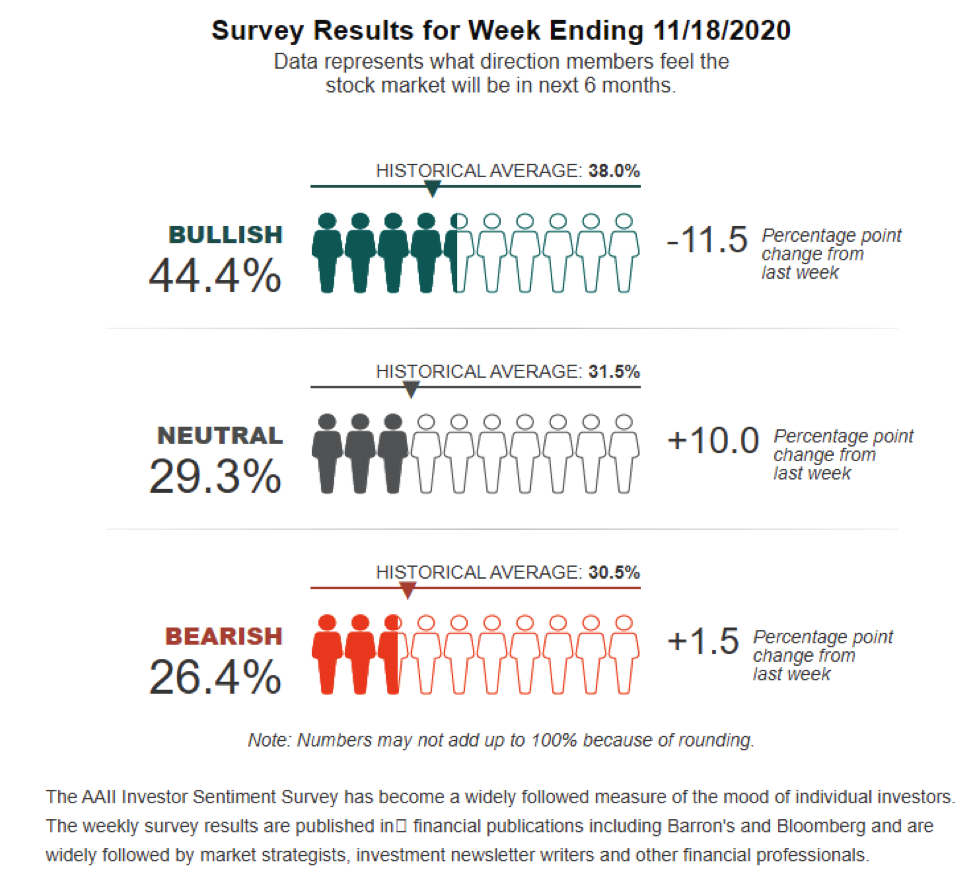 This column will be published Monday, Nov. 30. Who knows what new medical news we might receive that day?

We will get past the shutdowns and the social distancing that crushed the global economy earlier this year. I’ve said all along that the pandemic is driving the timeline of the economic recovery. That remains true.

Is this good news already priced into the stock market? Or can we expect more gains based on announcements of more medical breakthroughs? And will real-time economic data reveal that our expectations of better times ahead are becoming a reality?

I think the stock market will get rocked by year’s end.

Three vaccine announcements in three weeks: Can the news get any better? What will be the catalyst to keep the stock market moving higher? There is the hope that the vaccines will get us to a new day. However, COVID-19 infection rates have been spiking. We must get beyond renewed lockdown measures. The governors of California, Oregon and Washington state issued a joint statement discouraging travel. Virginia, New York and Massachusetts tightened restrictions. Illinois threatened a statewide stay-at-home order.

Many businesses are already on their heels. Others wish they were still on their heels. Last week, the Wall Street Journal reported that even those that received significant help weren’t able to make it. About 300 companies, representing approximately 23,400 workers, filed for bankruptcy after receiving capital from the Paycheck Protection Program. But those 300 companies underrepresent businesses on Main Street, U.S.A. The WSJ only researched the largest 13.5% of the PPP borrowers. Many smaller businesses simply closed their doors and will never reopen again as opposed to filing for bankruptcy.

Not only did those companies receive PPP loans, but they had the advantage of summer weather. With the days getting colder and socially distanced consumers getting used to shopping from home, Main Street, U.S.A., is severely threatened. As welcome as the vaccines are, vaccines will not help the global population, including the U.S., reach herd immunity until late 2021. Businesses need fiscal stimulus, but there is no lifeline in sight.

The amount of bulls has receded, but it’s still too high for my comfort. Crowds tend to be wrong at extremes, and the current level of bullishness feels extreme. According to the American Association of Individual Investors, 44.4% of those surveyed last week were bullish. That’s not good, but it’s not horrible. The historical average is 38.0%. However, the week prior, the number of bulls was 55.84%. My old eyes scrolled through years of recorded data, and the last time bulls ran that high was in January 2006. We’re not in uncharted territory, but historically such high bullishness levels are a headwind for stocks and are only resolved by a meaningful pullback.

The stock market has run into a technical headwind (excessive bullishness) as well as a fundamental headwind (increased pandemic concerns). And that doesn’t even include the millions of unemployed workers who will lose access to unemployment insurance in the months to come. The call for a correction appears to be an easy one. In the summer, an easing of economic restrictions was a tailwind for the stock market. Now it faces the headwind of increasing restrictions on activity.

I’ll admit, my expectation of something in the 5-15% range isn’t very helpful, but I do have some useful advice. On average, the stock market corrects 5% three and a half times per calendar year. We just ride those out. But a 15% move gets me thinking about getting more defensive. So should investors bail on stocks? No. I have an alternative plan for you to consider.

I am constructive on a one-to-two-year horizon based on positive medical developments. However, this is assuming appropriate fiscal stimulus legislation is passed in the coming months (more on that in a moment). Investors should take advantage of what is expected to be bouts of weakness in the weeks ahead. For growth-oriented investors, raising cash to time that pullback is not appropriate. The plan, which I have scribbled on the back of an envelope, is to shift a bit from large caps to small caps.

I don’t want to try and be too cute and time any pullbacks that really aren’t all that serious. I own more large-cap stocks than small-caps. If we get a correction, I am relying on them to go down less than small caps. This would make small caps relatively cheaper to large caps than they are now, warranting a rebalance.

I am confident that all of the medical news we keep getting will allow us to drop restrictions and get back to social gatherings. I have less confidence in the government doing the right thing. If Congress doesn’t get something passed, as I’ve said for months, I fear that the U.S. will dip back into a recession in 2021.

I am investing as if we’ll see something in the range of a $500 billion stimulus package announced by early February. (For comparison, JP Morgan is expecting a $1 trillion stimulus in March 2021.) However, by then, it will be too late. There will be irreparable damage to the economy. A stimulus package will help U.S. GDP growth in mid- to late 2021. Still, there is a good chance that GDP, for the first quarter of 2021, will be negative due to rising coronavirus infections; at least that is what JP Morgan said in its 2021 outlook.

Am I being overly hopeful, even naïve, to think we’ll get a fiscal stimulus package? I really don’t think so. Last week, President-elect Joe Biden announced that former Federal Reserve Chair Janet Yellen is his pick for Treasury secretary. Ms. Yellen has encouraged Congress to spend more to support the unemployed and small businesses. In a Sept. 28 interview, Ms. Yellen said: “There is a huge amount of suffering out there. The economy needs the spending … This is not a good time to have fiscal policy switch from being accommodative to creating a drag. That’s what happened [following the 2008 financial crisis], and it retarded the recovery.” The Biden transition team will see her as a credible authority on the dangers of withdrawing stimulus too soon.

The stock market has feared the possibility of two Democratic senators being elected in Georgia’s runoff election on Jan. 5. This would make the Senate 50/50, but the tie vote goes to the vice president. A 50/50 Senate would make it easier for President-elect Biden to make good on his campaign promises to hike corporate tax rates. I suspect Ms. Yellen would advise against doing so until we are well beyond the pandemic.

Allen Harris is the author of ‘Build It, Sell It, Profit: Taking Care of Business Today to Get Top Dollar When You Retire,’ as well as the owner of Berkshire Money Management in Dalton, managing investments of more than $500 million. Unless specifically identified as original research or data-gathering, some or all of the data cited is attributable to third-party sources. Full disclosures: https://berkshiremm.com/capital-ideas-disclosures/. Direct inquiries to aharris@berkshiremm.com.