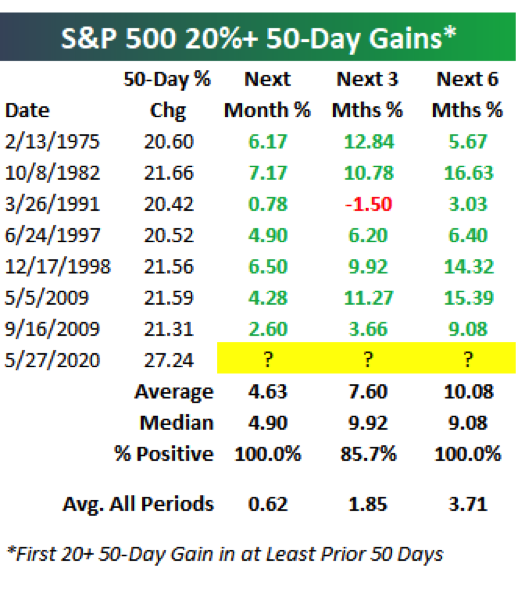 Dalton — Is it time to sell stocks because they’ve gone up so much? No. I don’t think so.

Yes, we’re going to get a big correction. But, heck, we’re always going to get a big correction. Roughly three and a half times per year, the stock market corrects 5% from an intermediate-term top; about once every 14 months the stock market corrects more than 10%. Yet for more than a century, the U.S. stock market seems to keep finding new highs. Knowing that a correction is coming, whether it’s 5% or even 15%, doesn’t necessarily mean it makes sense to go to cash because even if you know a correction is coming, the timing of it is unreliable at best.

As readers will recall, before the COVID-19 downturn, I had been predicting a recession to begin in 2020. I firmly believe that even absent the shutdown, the U.S. was going into recession (just as I finished proofreading this column, the National Bureau of Economic Research dated this recession to have started in February 2020; on March 1, there were only 89 COVID-19 cases in the U.S and the first continental U.S. stay-at-home order was March 15 in California. So I’m feeling pretty freakin’ smart right about now). I know it didn’t seem that way if you weren’t looking at the leading indicators as I habitually do. In January 2020, it seemed as if things were so good they could never go bad again. As the saying goes, it’s always darkest before the dawn, and it turns out that it works the other way, too: Nightfall follows sunshine. I had been fortunate enough to already be nervous about the vulnerability of the stock market and thus had an itchy trigger finger on that “sell equity” button. In the Jan. 29, 2020 column “Just Give me a Reason,” I advised: “There are most likely some riskier stocks or funds that have accelerated in price to the point where you own more of it than you should. Address this by selling those and reallocating the proceeds to the parts that have proven to be more stable. … There is nothing contradictory in your plan by becoming increasingly more defensively oriented while keeping a claim on the upside, especially because I’ve got no idea on the timing.”

I admitted that I was scared to be in the market even pre-COVID-19, but that I had no idea on the timing of any potential downturn, which is why I’d “continue to ride this wave up, but do so in a continuously defensive manner.” Then, it got dark — real dark.

Now, dawn has come. Last week, I said that the recession is over (based on cold-hearted econometric measurements), but for about a month and a half prior to that, in response to increasingly less-bad economic data, we’ve been holding fewer put-and-call options (a strategy used to protect us from a falling stock market, “while keeping a claim on the upside”). I had been tracking positive trends in things such as the requests for driving directions on Apple Maps, OpenTable’s increase in restaurant reservations, hotel occupancy rates, people moving through TSA checkpoints, and home purchases, and now I hold significantly less portfolio insurance.

Even when the economy is coming out of a recession, the stock market can be volatile to the downside. Part of me wants to sell stocks again because the odds are increased that I can time a correction — but even when there are better-than-average clues, it’s still just so hard to time. So instead, I forge ahead and hold my stocks, knowing that — at some point — a big correction is coming and that it doesn’t necessarily mean the end of the stock market’s advance. Instead, I’ll probably use a pullback to sell off the rest of the portfolio insurance I am holding and reinvest into less-hedged equity positions.

The stock market can be volatile in the short term, but over a longer term, the market is good at looking through the short term (i.e. it’s dark at this moment) and instead it reacts to what is coming (the dawn? Maybe even sunshine?). For the last couple of months, the stock market has clearly been comfortable betting on some return of normalcy, and the high-frequency data, so far, supports that hypothesis. But even if the data changes and it turns out that the expectation of an economic recovery is wrong, it may not matter to the stock market because there is the expectation that the Federal Reserve is going to do whatever it takes to bail out the stock market.

However, last Friday’s payroll figures seem to support the notion that the recovery has begun, coming in with a whopping gain of 2.5 million jobs. That’s a lot of good news, so I won’t try too hard to snuff out that sunshine, but there are some gray linings. For instance, employment is still down 19.6 million from February. Also, the survey used to calculate these numbers was messed up. The survey collection rate was smaller than normal, and there was some evidence that workers may have misclassified themselves (it’s too geeky to put here – email me if you really want to know). Those issues aside, this is data that confirms our assessment that the recession is over, even if overstated.

I don’t dare try (yet) to get much more specific on any predictions. The consensus forecast for May’s payroll numbers was for a loss, not a gain — and not just a small loss, but an estimated loss of 8.3 million jobs. That was, not surprisingly, the largest ever consensus miss for monthly payroll numbers. In a world where people — people much smarter than me — cannot even get close to the actual numbers, I am not confident that I can be precise in my prediction. However, if we only invested when we had confidence, I suppose we’d go broke buying when stock prices are high and everything seems rosy, which is when we tend to feel most confident. I have learned to be comfortable being uncomfortable.

Just because I am almost fully invested in equity for the growth portion of my portfolios doesn’t mean I don’t see the risks. It is prudent to consider the awful fundamentals — expensive stocks, massive unemployment, major corporate bankruptcies, a vaccine that remains out of our grasp, civil unrest — but I must also pay attention to what is happening to the technicals. As I’ve said, perhaps ad nauseam, in a world where we can’t do a good job tracking the fundamentals, I’ve got to rely on the technicals. And I’m glad I did! In the May 27 column “Dr. Feelgood,” I shared my concern that there was the threat of the S&P 500 finding resistance as it tried to break above its 200-day moving average, but “if the S&P 500 can break 3,050, it has a clear path to 3,110” and that’s exactly what happened.

The average six-month return for the S&P 500 after it had surged 20% or more in 50 days was 10.08%. That would put the S&P 500 at 3,342 points (a gain of about 4% from here) by the end of November. Even though a 4% return in half a year is a lot, it almost seems immaterial after the last couple of months, but that’s not the point. The point is that the technicals don’t turn against investors after a mad rush into stocks. Like anything else, it’s not an all-clear signal by itself to just get invested into equities and go into cruise control. But it is further evidence that we’re getting closer to being able to set the allocation of our investment portfolios and, besides some minor tinkering, not have to make any more changes for a while — or at least not nearly as much tinkering as investors have had to do this year.

The above notwithstanding, as I’ve said for months now, the coronavirus dictates the timeline, not us. As the U.S. has been reopening, infections are rising again. Also, there seems to be little containment of the virus in many emerging countries, which increases the risk of a serious second wave reaching the U.S. later this year. I haven’t forgotten to be aware of this risk. The economic data is looking increasingly good, but as we saw in March, the virus can take all that away virtually overnight.