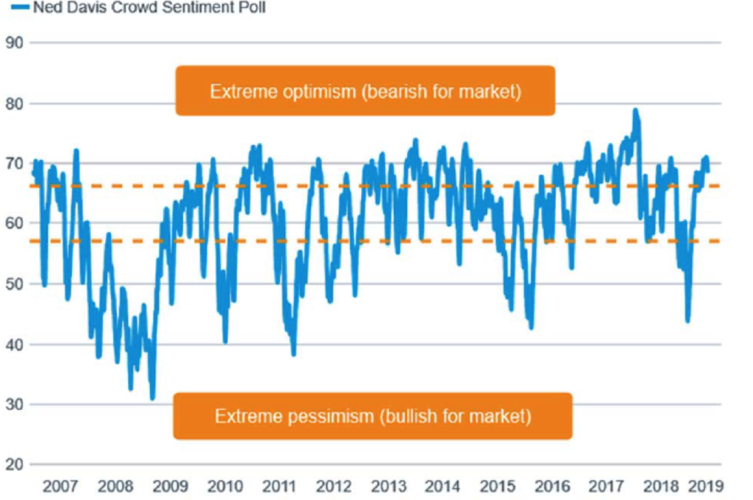 Dalton — The last week or so of stock market stumbling notwithstanding, we are now going on four and a half months of rallying. The median S&P 500 correction in the first six months of the recovery has been 8 percent. (For perspective, the S&P 500 averages 3.4 corrections of at least 5 percent and 1.1 corrections of at least 10 percent in a year.) Further moves downward is a high-probability event, from a historical standpoint. On closing basis, as of May 11, there had been 89 trading days since the last 3 percent correction (that stretch was broken Monday, May 13, as the corrected 4.2 percent from its most recent high). While far short of the record 308 days from November 2016 to January 2018, it was still the second longest streak since March 2009. Not only is that stretch long, it’s also atypical coming off a waterfall low like we saw in December. After such a decline, you typically see a strong rally, a quick but weaker retest, then the real rally starts.

As I said on May 1, “if you are now holding an outsized allocation of equity relative to your financial plan, now is a good time to rebalance back to the allocation required to achieve your intended outcome.” I advised against taking an all-or-nothing approach like “Sell in May and go away,” as whatever decline was coming could be categorized as normal. Being the contrarian that I am, I had been uncomfortable with investors’ optimism. The current pullback might be what we needed to inject a bit more pessimism into the market, thus setting up our next rally.

The correction may have accelerated because of trade talks, but it didn’t begin because of those talks. On the evening of Tuesday, May 7, the Federal Reserve released its Financial Stability Report. With respect to the equity market, the report said that “valuation pressures remain elevated in a number of markets, with investors continuing to exhibit high appetite for risk.” The Fed did point out that “some pressures eased a bit since the November 2018 FSR,” but when they say valuations are high, you’re probably going to get a sell-off.

When the Fed released that report, the S&P 500 traded for 17.4-times trailing earnings. That compares to a historical median of 16.5-times over the last 25 years. While the market’s valuation may be a bit higher than their historical average, interest rates and inflation are low enough to argue that that’s not excessive. One more correction (or another week like the last one) and we’ll be right back to the historical median (which would be about 2,734 points on the S&P 500).

I had warned to expect a stumble in the markets. And investors seem to have found a catalyst they could use to rationalize selling. Last week I explained the gist of how last week’s presidential tweet potentially put Chinese delegates on their heels just prior to their trip to D.C., which had been intended to be cordial and progressive talks to improve trade relations, even discussing the particulars of a signing ceremony. The threat of more tariffs to be imposed by the U.S. just before talks were to begin was a dangerous game of diplomacy chicken, which didn’t end well as the Chinese said they were going to retaliate by raising tariffs on $60 billion of U.S. goods starting June 1.

Channeling my inner Captain Obvious, I’m hesitant to go too in depth about the tariffs because we’re always just one tweet away from it being last week’s news and thus quickly less relevant. Plus, unless you’re a geek like me, international economics can be boring. Just try to win friends and influence people by talking about tariffs at your next cocktail party—you’re going to be like me and left petting the dog, who will be the only one tolerating your assessment of interest rate correlation to deficits. And even then it’s only because I’m slipping Fido some treats. So I get it: less talk, more treats.

A quick recap: President Trump argued that the Chinese were going backward in some of their negotiations and so he announced that, as of 12:01 a.m. on Friday, May 10, the U.S. would increase tariffs from 10 percent to 25 percent on $200 billion of goods. The Chinese sent a delegate to D.C. last week and they wrapped up—surprise, surprise—without making a deal. President Trump said he could possibly delay enacting the tariffs as talks progressed, as he found the talks “candid and constructive.” But then the president went and told his chief U.S. trade negotiator, Robert Lighthizer, to begin the process of raising tariffs on another tranche of products (which is about $325 billion worth of stuff). The specific numbers are less meaningful for this conversation than the theme—confusion. It’s no wonder investors used this as an excuse to sell stocks. How can you properly value a company’s stock price if you do not have clarity on major economic agreements? You can’t. A lack of clarity means greater risk, which means a higher discount rate needs to be applied to a discounted cash flow analysis of corporate earnings, which means—all other things equal—valuations deserve to be less.

Onto the treats (if you want to call them that): According to Oxford Economics, having assumed that China retaliates, the new tariffs will cost the US economy $62 billion per year, or $490 per U.S. household. If 25 percent tariffs are applied to the additional $325 billion, it will then drag down the U.S. economy by $100 billion, or $800 per household. Job creation is estimated to be curtailed by 200,000 and 360,000 respectively.

Perhaps I am naïve, or too optimistic, but I don’t see that as the mostly likely scenario. These higher tariffs will impact more than 5,700 different Chinese goods. However, these new duties will not apply to goods already in transit to the U.S., only those that shipped on or after May 10. It can take 30 to 40 days for ocean freight from China to reach the ports, providing a potential grace period for further negotiations. U.S. Treasury Secretary Steven Mnuchin said that no additional trade talks with China are currently scheduled. However, the G20 Summit will be held in Japan, coincidentally, in about 30-40 days (June 28-29 to be specific), where the presidents of U.S. and China will both be. It seems as if the only way to break the impasse may be through direct dialogue between both leaders, and that opportunity exists. The chances of Trump and Xi meeting during the Group of 20 summit in Japan in late June “are probably pretty good,” according to White House economic adviser Larry Kudlow.

Given that the president needs to run a re-election campaign soon, a likely trade scenario is that some form of concession is made by the end of this grace period, just prior to a meeting between the Chinese and American presidents in Japan. Like I said, maybe I am naïve. Or perhaps I’m overly cynical and I don’t see any way possible that the president will let a trade war get in the way of the stock market’s progress and derail his re-election hopes.