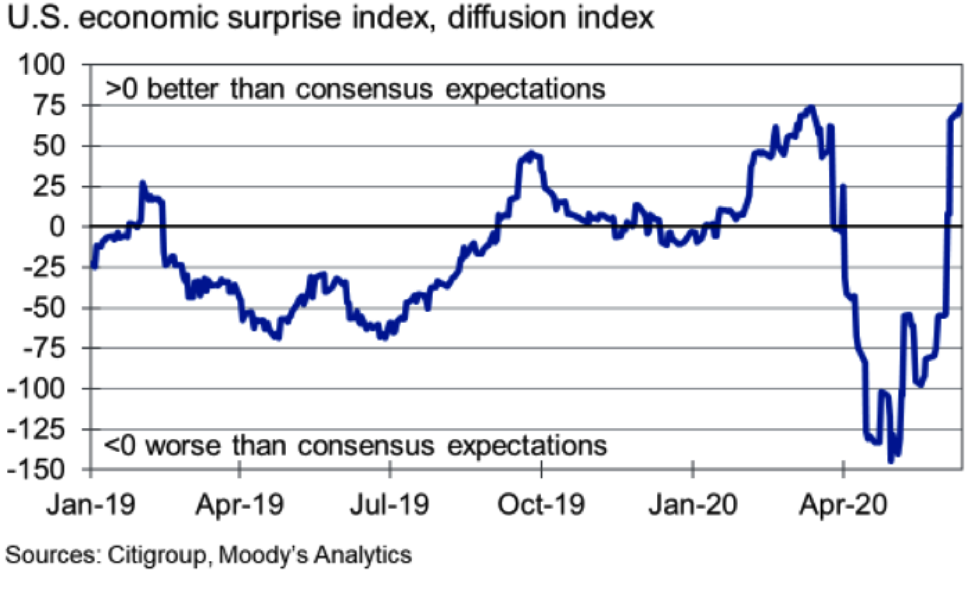 Dalton — After months of a powerful rally, last week, the stock market corrected a bit, with major averages dropping below their 200-day moving averages. Given that the stock market could be considered “overbought” by a variety of metrics, further consolidation is likely required before stock prices can regain their footing and continue their advance.

I do expect stock market averages to continue their advance over the intermediate term. Sure, in the short term there should be some consolidation in prices. However, over longer periods stocks will generally perform better a) when the economic data goes from “bad” to “less bad,” and b) when the economic data points surprise to the upside. Both are happening.

Demand for oil in the U.S. is back to almost 18 million barrels per day, up from the low of 14 million bpd in mid-April. There are signs of goods being transported, with rail container and tractor-trailer loadings off their bottoms. Transportation Security Administration checkpoint traffic and restaurant bookings through Open Table are still bad, but less bad nearly every week. Hotel occupancy rates are up. Requests for directions in Apple Maps are up. With mortgage rates at low levels, applications for loans to purchase single-family homes are higher now than they were during the pandemic.

Also, U.S. economic data is coming in better than expected. According to the Citigroup’s economic surprise index, forecasters have had too dour an outlook on how the economy would rebound.

It is good news when data comes in better than expected, but the biggest jump in actual data versus expectations came from that massive jump in payrolls last week. That is not to discount the employment data, but that spike on the tail end of the Citigroup graph is likely to reign back in considerably even if the trend continues up.

The improvement from bad to less bad and the better-than-expected economic data does not mean that we’re out of the woods yet. Things still suck.

The stock market sure sucked on Thursday, June 11, with indices dropping as much as 5%, presumably due in part to the Federal Reserve making such accommodative comments that it left investors wondering, “what’s so bad with the economy that they’d say that?!” as well as a concern about a second surge of COVID-19. The Centers for Disease Control and Prevention has reported that new daily COVID-19 cases have been showing a slight bump since Memorial Day, when much of the country started reopening. Those numbers are possibly understated as it can take up to two weeks for people to feel symptoms, and then sometimes additional days before the affected seek medical care and testing.

Days in which the market drops 5% are rare. Including last week, there have only been 28 occurrences since 1952 (with five of those happening in the last three months!). The big sell-off shows that there are real jitters about the durability of the stock market’s recovery since the March lows. The good news is that the returns of the S&P 500 are, on average, pretty good compared to all other periods for the stock market. But those are just averages. The bad news is that the odds of whether the index experiences positive returns over the next one week to six months aren’t much better than a coin toss. 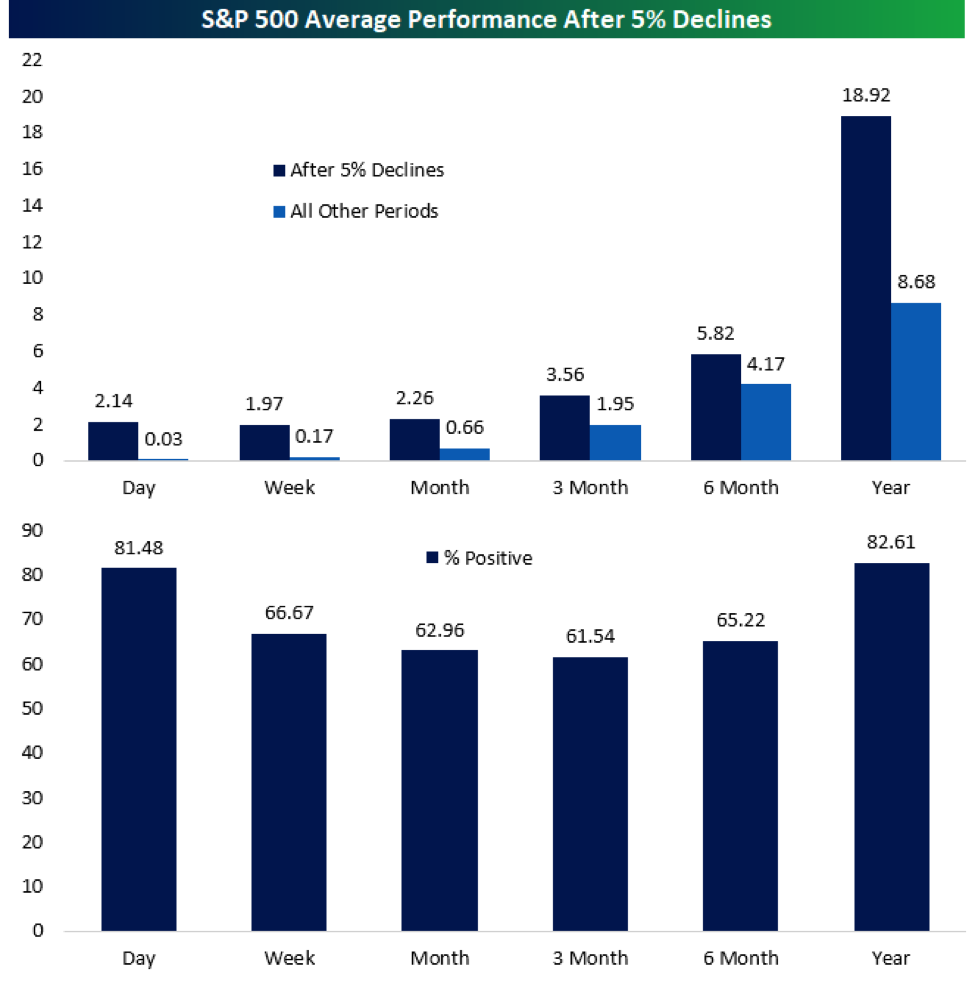 I’ve been saying that I expect a pullback (I don’t know if last week was all of it, but I doubt it), so I shouldn’t be too surprised that we had such a big one-day selloff. But I was surprised that it happed on the same day Treasury Secretary Steven Mnuchin said, “we can’t shut down the economy again,” when asked about a policy model in response to a potential second wave of virus infections. Additionally, Secretary Mnuchin said that, if needed, he is prepared to return to Congress to request additional fiscal spending to further spur the economy. It seems as if the Trump administration wants to get America back to work, but it’s dropping the ball on realizing that additional fiscal stimulus is needed.

Last month the House Democrats passed a $3.5 trillion stimulus bill knows at the HEROES Act that would extend jobless benefits and provide relief for cities and states, which have seen a drop in tax revenues. But Republican senators described the Act as “dead on arrival.” Democrats seem to want to get things done now, while the Republican side of the aisle is taking more of a wait-and-see approach. When it comes to fiscal policy, I tend to lean to the right. However, this wait-and-see approach is ill-advised. If cities and governments are forced to take austerity measures to maintain balanced budgets, my bets are going to be on another recession in 2021.