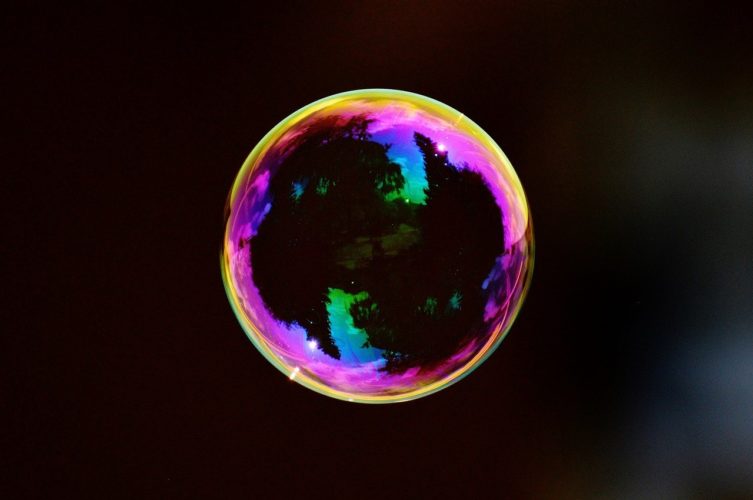 According to a recent E-Trade survey, millionaire investors believe the U.S. stock market is in a bubble (or at least near one). The survey results from investors with at least $1 million of investable assets were:

More than half of the millionaire-class believe the U.S. stock market is at least in “somewhat of a bubble.” They may be right, just accidentally, but are they reliable? After all, although they believe the stock market is in a bubble, many expect it to rise this quarter and, in response, their risk tolerance has increased.

Their risk tolerance is increasing for a stock market they believe is in a bubble! That sounds a lot like last week’s column, where I wrote about how some people buy things that go up in price just because the cost of those things is rising. They are contradictory in what they are saying, so let’s consider what they are doing.

Millionaires are selling some of their large-cap U.S. stocks and buying more small-cap U.S. stocks and foreign companies’ equity. They are also purchasing beaten-down stocks in the Energy and Financial sectors. The millionaire class’s top sector bets are Health Care (66 percent) and Technology (53 percent).

Do I believe the stock market is in a bubble? Some individual stocks certainly taste bubbliciousy. In general, the secular bull market run that started in 2009 is extended, but not a bubble.

But who am I to say? There is no objective definition of a bubble. Part of the description of a bubble is that prices moved to an irrational level based, in part, on groupthink and herd behavior. It is dangerous to say something has reached bubble proportions because brainwashed participants will attack you for pointing out that they are making a risky investment. Which makes you wonder if you are thinking incorrectly. Some bubbles cannot be identified (or at least accepted) by many while they are occurring.

I bring up the difficultly of identifying a bubble because it’s essential to be aware of behavioral deficiencies that might influence me in making an assessment. I need to be sure that I am not being persuaded by herd behavior.

The wealthy feel the market is in a bubble, and I don’t. Who is right and who is wrong? Well, I’m not sure it matters. I mean, we’re both invested in the U.S. stock market. We both think something bad is going to happen, yet we both remain invested. We both buy small-cap stocks and eyeball Financial and foreign stocks (although I still am not fond of Energy stocks, and they are). And we both overweight the Technology and Health Care sectors.

I don’t know who is right, but whatever happens to the market, our portfolios will probably perform somewhat similarly over the short term.

While I don’t think the market is in a bubble, I can easily categorize myself in the camp that says we are “approaching” a bubble. In part, it is easy to place myself in that category because “approaching” can mean either an inch away or a mile away. It’s also true.

The above chart doesn’t tell the story; it only gives the context. If you create a linear regression and show a +/- standard deviation band, you can see how stretched stock prices are relative to a historical trend line. (Wow! That was geeky. Allow me to rephrase. If you draw lines around the stock market, you can get a visual reference of price swings.) 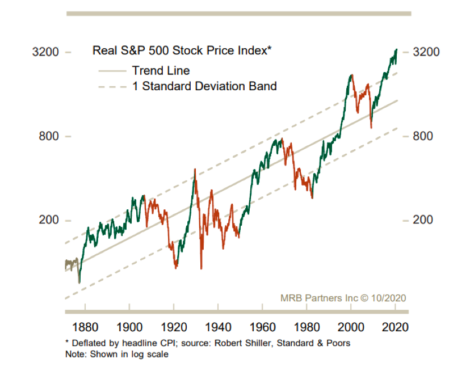 Now, when you look at that chart, that is a very extended stock market. And you know what? I am not sure I’d fault anyone for calling it a bubble. Why am I not scared (yet?). The U.S. economy is looking at potential liquidity injections of about 20-25 percent of Gross Domestic Product from both monetary and fiscal sources. And that’s not including any new stimulus measures the Biden administration may sign into law.

I agree with the wealthy — something bad is going to happen, but just not yet. It’s a bad practice to fight the Fed. And not only is the Federal Reserve being accommodative, but the monetary stimulus is acting as its partner in crime. I am not able to fight the Fed by its lonesome; I don’t want to try and take them both on at the same time. Instead, I remain invested.

The current price of inflation-adjusted stocks is not a signal of imminent doom for the stock market. Valuations have never proven to be a useful timing tool. Equities and other asset classes can remain either expensive or cheap for years. Investors are willing to pay more for stocks when the Federal Reserve is transparent about its accommodative intention, which it currently is.

I am optimistic regarding this cycle in terms of both economic and corporate earnings growth. Also, investors are willing to pay more for stocks when they have confidence that an economic expansion will persist. It probably will, given the three trillion dollars of fiscal stimulus that has already passed.

Not to mention that the distribution of an effective COVID-19 vaccine is worth some great deal of stimulus. How much? Well, let’s consider the restaurant industry alone, one of the sectors hardest hit by the pandemic. In 2019, restaurants employed 11 million people and sales were $860 billion, or 4 percent of Gross Domestic Product. Fixing the restaurant industry will accelerate GDP. And then, consider every other industry stricken by the pandemic. Events. Theme parks. Downtown shopping. Plays and movies. Travel. The list goes on and on. Fixing these beleaguered industries will be a shot in the arm (no pun intended) for economic growth.

Unfortunately for investors, this is all known, and it’s baked into stock prices. There is an adage that “the stock market climbs a wall of worry.” Stocks typically perform better when people expect something terrible but get surprised when data flow becomes positive. All this good news may justify the stock market’s lofty levels, thus exempting it from bubble territory.

I believe we are approaching a bubble. Or maybe we’re in a bubble, and I am one of those brainwashed fools who can’t see it yet. I’ll be open-minded that we could be in a bubble, and if the stock market begins to unwind, I’ll let you know if I think it’s time to get defensive. For now, the plan is to rotate slowly into less “bubbly” areas over time and, if needed, react more quickly if we need to.

Allen Harris is the author of “Build It, Sell It, Profit: Taking Care of Business Today to Get Top Dollar When You Retire,” as well as the owner of Berkshire Money Management in Dalton, managing investments of more than $500 million. Unless specifically identified as original research or data-gathering, some or all of the data cited is attributable to third-party sources. Full disclosures: https://berkshiremm.com/capital-ideas-disclosures/. Direct inquiries to aharris@berkshiremm.com.