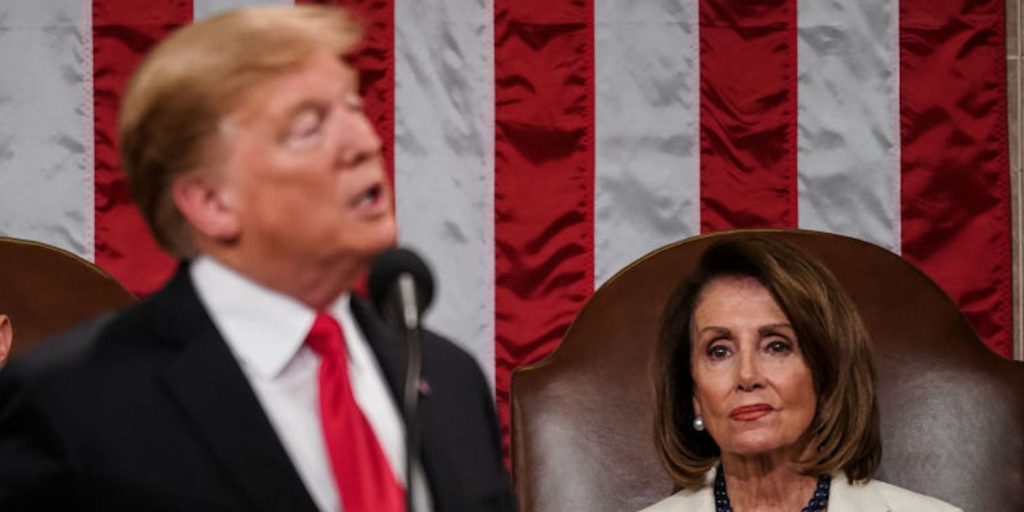 At the federal level, the impeachment process is a three-step procedure:

The stock market laughs at impeachment

Dalton — The stock market is doing well. I know, there’s a lot of chatter about it not being able to break out above its recent highs, but given the constant trade war battles, new flare-ups with Iran, weak earnings and even weaker manufacturing output, and most recently heightened impeachment chatter, I just don’t see how you can’t be happy with the market.

Let’s talk briefly about the possible impeachment of President Trump. I’m not going to make any political commentary, and I’m sure you’ve heard all the news about President Trump and his call with the Ukrainian president Zelensky asking him to investigate former Vice President Joe Biden and his son, Hunter Biden, on their activities in the Ukraine. One of the reasons I won’t go into the politics is because we humans are ideological beasts. If you are a Republican or a Democrat and a human, you’re going to read the news in a manner that supports your narrative. Last week I had a long flight back from San Antonio, Texas, to the Berkshires, so I read the whistleblower report and the unclassified Trump-Zelensky conversation. Here is what I see as the shadiest thing Trump did, and the thing that will be the most helpful in deflecting any impeachment attempts.

I don’t care if you’re on Team Republican, if you say it wasn’t shady of Trump to ask the Ukranian president to “do us a favor” in helping the Justice Department to pursue a political agenda, then you’re just not being intellectually honest on the matter.

But, come on Team Democrat! Stop it with the “quid pro quo” commentary. Pro-impeachers are saying that the conversation implies that President Trump would withhold aid to the Ukraine if the favor wasn’t fulfilled. There is absolutely no evidence to this. And I know what you’re going to say, that “you know what Trump meant.” And if that’s your argument, then I can’t further explain the situation because you most likely care more about the argument than how trials work. But if you’re feeling that I’m being too contentious, or protective of a shady president, I’ll give Team Democrat one more tidbit you can use at cocktail parties when talking about how strongly you feel Trump needs to be impeached. In the whistleblower report, it says that Trump’s private attorney “Mr. (Rudolph) Giuliani reportedly traveled to Madrid to meet with one of President Zelensky’s advisers,” and “separately, multiple U.S. officials told me that Mr. Giuliani had reportedly privately reached out to a variety of other Zelensky advisers.” Mr. Giuliani has no government position or responsibility and was supplanting people with the official responsibilities to communicate with the Ukraine. Democrats are trying to figure out if that broke any laws, which, so far, doesn’t seem as if it did, but holy heck, that is shady AF.

If I had to guess on impeachment or not, based on my very limited experience on this (and hope that a decision would be based on evidence as opposed to hearsay), I’d say there will be no impeachment if only because the whistleblower said, “I was not a direct witness to most of the events described.” I do, however, think the whistleblower will eventually get a seven-figure advance bonus from a publisher for a book that will hit the New York Times Best Seller list.

To be sure, I’m not being self-deprecating when I say I have limited experience on impeachment. Pretty much nobody is well-versed on this topic, including the hundreds of print and television commentators who have come out of the Woodward, er, woodwork. (Freudian slip?)

Only three U.S. presidents have faced impeachment proceedings. It makes it hard for me to use impeachment threats or proceedings as a tool to determine where U.S. stocks will go. In 1868, when Andrew Johnson faced impeachment proceedings, interest rates dropped and stocks didn’t do much. When Nixon had his turn to face impeachment proceedings, though he left office before Congress could impeach him, stocks were already crashing because of the 1973 Arab oil-price increases and embargo. When Nixon left the office, the political influence was insignificant compared to the damage to and eventual recovery of the economy. On the day of Bill Clinton’s impeachment in 1998, the stock market dropped 5% until investors essentially said “who cares?”, and the market clawed itself back toward unchanged. However, that drop and recovery had more to do with the markets finally capitulating after a rather painful few months of stock prices adjusting downward in response to the Asian financial crisis.

These instances of impeachment proceedings is not a lot of data. Fortunately, Mr. Craig Botham, the emerging markets economist of Schroders, collected a few more data points of other nations’ leaders facing similar circumstances. Mr. Botham concluded that, “Overall there is weak, rather than compelling, evidence that impeachment leads to higher volatility … (in regards to the stock markets’ reaction to impeachments) there appears to be no obvious pattern.”

An impeachment of President Trump would mean a whole lot less than the policies in place or economic momentum. Keep in mind, as many forget, impeachment does not mean the removal of a sitting president. That’s a whole different process that is merely kicked off by the completion of a successful impeachment. I’m not going to get into the weeds here, but Trump ain’t getting kicked out of office. Even if the House of Representatives impeached, I see it as an outlandish consideration that the Republican Senate would convict him. As an investor, I’m going to shrug off the impeachment conversation. Sure, I must take into consideration that bipartisan efforts, like the much-hyped infrastructure bill, will now stall, so that’s some stimulus we won’t get this year. Also, any additional degree of uncertainty about the pace or direction of policy in regards to the U.S.-China trade war, the ratification of the “new NAFTA” (the U.S.-Mexico-Canada agreement, referred to as USMCA), Iran relations, and how this plays a part in the November elections will be a net negative for making and sustaining new highs in the stock market. Nonetheless, overall, I’m treating the impeachment conversation more as political theater and not so much something that will make me change my investment allocation.

This is it: the final quarter of the year. At the end of the first half of 2019, I told you it would be safe, but mostly unrewarding, to stay in the stock market. Well, the broad stock market indices ended up pretty much flat in the third quarter. I’d call that safe but unrewarding. Finishing out the year in the fourth quarter, my assessment hasn’t much changed. There is balance in the risks and rewards, or pros and cons, if you prefer. Below is the laundry list:

The whispers of concern regarding consumer confidence are only quiet outside the walls of my office. It doesn’t get much media coverage, but I obsess over the sort of things, like consumer confidence, that nobody else is paying attention to, because those are the little things that pile up like the proverbial pieces of straw that eventually broke that poor camel’s back. Most people don’t even know of the causation between consumer confidence and economic recessions. (Note that I used the word “causation.” Statistically it would be a correlation. But not every correlation is a causation. In this instance, it is causation.) The Conference Board measures consumer confidence, both in the Present as well as Expectations. Confidence in Present Conditions is peaking, but Expectations have turned down in recent months after being largely stagnant for a couple years. Below is a chart comparing the expectations of consumers to how they felt at the present time of the survey. As you can see, the difference is currently at a level where previous recessions have started. 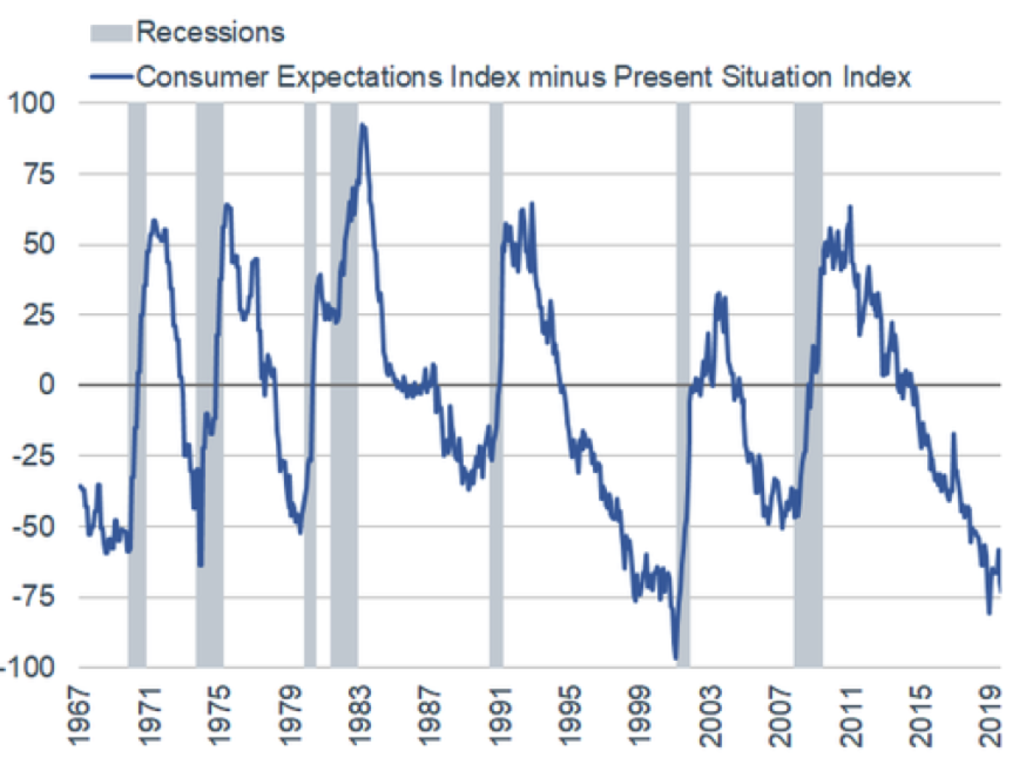 If we feel good now but feel as if things are going to get worse, we’re more likely to be more frugal or defensive in anticipation of those things getting worse. Whether the chart above is truly predictive or if it tracks a self-fulfilling prophecy, it doesn’t much matter if the end result — a recession — remains the same. One last “pro,” which is a bit of a tie breaker for staying invested for the rest of the year, is that I’m a bit of a seasonality and cycle nut. That stock market often follows patterns; it may not repeat, but it does rhyme.

Last year, 2018, might have had a horrendous fourth quarter for the stock market, but that’s an outlier in terms of what we can usually expect to experience with returns in the last quarter of the year. As shown below, the Dow Jones Industrial Average has averaged a gain of more than 1% in each of October, November and December in the last 20 years. 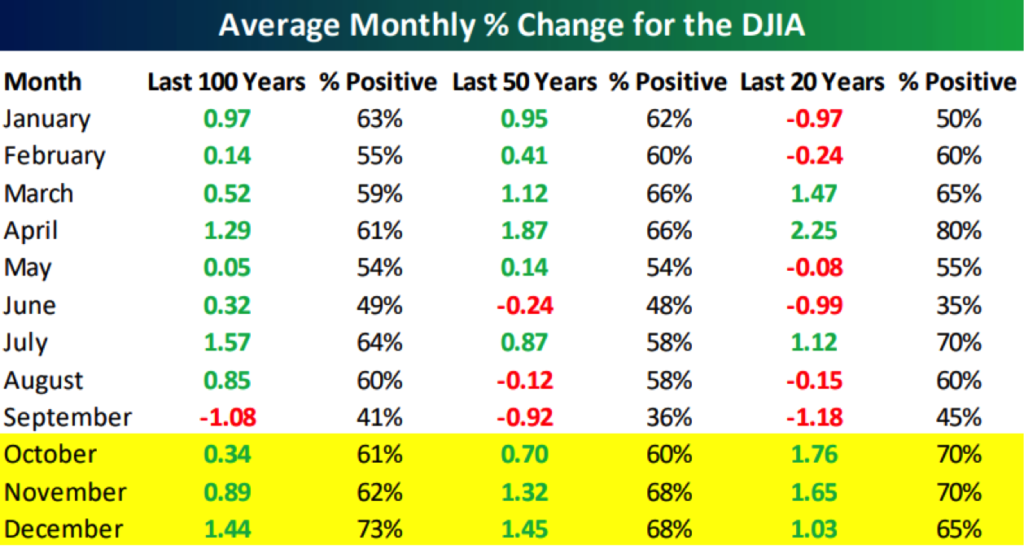 We are a tad bit overbought in the stock market currently. The major averages are vulnerable to a quick, mild correction in the coming weeks. Nothing out of the ordinary: It’s the type of thing that happens all the time. The new political risk of an impeachment could be the reason du jour as to why that’s happening. Since the 2018 midterms, nobody expected a lot of harmony between the White House and the Democratic House of Representatives. Historically, when there has been a shift from a unified to a divided government, as occurred after the outcome of the 2018 midterms, there is a five-fold increase in the number of congressional hearings. Not only that, but the length of those hearings are four times as long. Granted, an impeachment inquiry ups the ante a bit. However, political risks, if anything, only create a bit of short-term uncertainty that may be the reason for a short-term pullback in the stock market, but ultimately will mean very little in the longer term. The biggest short-term risk is that the inquiry happened just days after the House passed a short-term spending bill to avoid a partial short-term government shutdown by allowing for funding through Nov. 21. If the Nov. 21 deadline becomes a negotiating tool used by the president, or if the contentiousness is just too high, a shutdown just before the holiday spending season could be enough to derail the consumer. That would make me expect not just a quick, mild correction, but something closer to what we experienced last year at that time. Given that all parties involved don’t want to be blamed for that when the 2020 elections roll around, I’m currently thinking that a damaging Nov. 21 conflict can be averted.