Dalton — As I write this column, the federal funds futures markets point to a 30 percent chance that the Fed will cut rates June 19 and an 86 percent chance that they’ll be lower July 31. I’d guarantee you that the Fed won’t be cutting this week, but since there are no guarantees in this business, I’d say the odds of a cut this week are about the same that little green men from Mars built the pyramids. Not getting a cut this week may be short-term bad news for the markets since some of the reason for the rally off the recent market lows has been due to a hope that the Fed will pour a little fuel onto the stock market fire in the form of better financing terms for both consumers and businesses. I say “may” be short-term bad news because any action (or inaction) will be met with sharp scrutinization of every word in the Fed’s post-meeting press conference. I suspect the Fed will not cut this week, holding the federal funds rate steady in a range between 2.25 percent and 2.5 percent, but it will provide a dovish message, leaving it open to a possible cut later in the year.

After this week’s meeting, the real conversation begins: Will there be a Fed cut in July? In September? Will it be a proactive cut, in which the Fed offers some insurance against trade and global growth concerns? Or will it be a reactive Fed, responding to something bad probably already in the headlines?

The stock market can clearly make a case to support that 30 percent chance of a Fed rate cut this week as it has jumped about 4 percent, fueled by that narrative. Evidence of this is that stock prices rallied on weak economic data that might justify a Fed cut and have been more dismissive of good news that might support the Fed to keep rates as is. In other words, the danger of a trade war, at least recently, has been good for the stock market because it’s thought that the Fed might try to bail us out of the worst possible economic outcome by lowering interest rates.

As suggested above, a rate cut can be proactive or reactive. For a cut to occur this week, it would have to be considered proactive. Yes, housing has been sloppy. And, yes, trade wars with tariffs as weapons have slowed U.S. and global growth. But the list of things I could cite for why things are good would exceed the amount of space I have for this column. In the aggregate, the U.S. economy is currently a well-oiled machine. However, the Fed does have a history of taking out an insurance policy when it sees the risk of the negative growing. In July 1995 the Fed cut rates, then again in December 1995 and January 1996. And this was while the stock market was in rally mode and the economy was doing very well. The concept was to create a “soft landing” for what was seen by the Fed as nothing worse than a 50/50 chance of a recession. The Fed also took out some insurance and cut rates in 1998 as there were ripples from Russia defaulting on its debt. The danger of a trade war between China and the U.S. is potentially big enough of a headwind to warrant proactive measures.

Economic data doesn’t seem anywhere near where it would warrant a cut in rates, but economic data is backward-looking. The Fed doesn’t give rate cuts just for the heck of it. If it are being proactive, that means it sees bad news coming. Investors seem to forget that. Lower rates, for investors, is a Dream Maker. But I think the Fed will be a Heartbreaker. Love Taker. Drownin’ investors in what they saw as promises that were better left unsaid. Because now, with the promises of a “Fed-put” said, the market is getting a little ahead of itself and should back and fill over the course of the next couple weeks or months before hitting new highs. And I do think it is going to go higher. The political cynic in me thinks much of the awaited trade deals will be figured out prior to the 2020 presidential election, in plenty of time for voters to consider it a Trump victory.

I’m part of that 14 percent that does not see a Fed rate cut by July. Trade tensions can be undone almost as quickly as they were ramped up. What happens if the Fed cuts rates and then the trade issues are worked out shortly thereafter? Well, as a growth-oriented investor, I’ll go all in. But what does the Fed do? I suspect the Fed may be more reactive than proactive because fiscal stimulus in the form of a good trade deal could happen at any time.

If the fundamentals stay solid aggregately, we’ll likely either go into or come out of the coming annual summer swoon at new highs for the stock markets. When it comes to the markets, breadth leads price. Breadth is the number of stocks advancing relative to the number of those declining, and is measured by what’s called the Advance-Decline Line. The S&P 500’s AD Line, which represents large-capitalization stocks, hit a high June 13, while mid-caps are challenging their May 3 highs. The proverbial canary in the coalmine are small caps, which have not exhibited expanding breadth off the market’s recent lows. I’ll continue to monitor the lag in small cap breadth, as it could be an early indicator of a tired bull market.

Oh, and just to be clear, if I’m wrong and the trade wars don’t get reconciled, that’s going to be more of a heartbreaker than anything the Fed may or may not do. Unfortunately, that is a very real risk. My political cynicism is well-known—President Trump will make a deal prior to the election, using the deal as well as a stock market rally as fuel to aid him in the 2020 election. But what if I’m wrong? What if President Trump has a longer play in mind where he wants to do exactly as he said and shift manufacturing from China back to the U.S. and tariffs are part of his strategy? Let’s, for a moment, forget the sophisticated nuance of whether that’s a net long-term positive for the country as well as the globe. For the intermediate term, playing out the trade wars for an extended period could be what tips the U.S. into recession and destroys portfolios. We’ll learn more at the end of this month when Chinese President Xi meets with President Trump at the G20 summit in Japan. A Tuesday morning Tweet by President Trump suggests it could be a constructive meeting, and the Dow Jones Industrial Average up 350 points as I write this seems to agree.

Despite the possibility of Trump playing the long game, I expect a deal to get done sooner rather than later. Businesses, however, seem to be less hopeful than I am. And I can’t blame them. Just like them, I’m losing hope every day. Last week Morgan Stanley released its Business Conditions Index and it tanked 32 points in June. That’s the biggest one-month drop on record and its lowest level since December 2008, during the Great Recession. 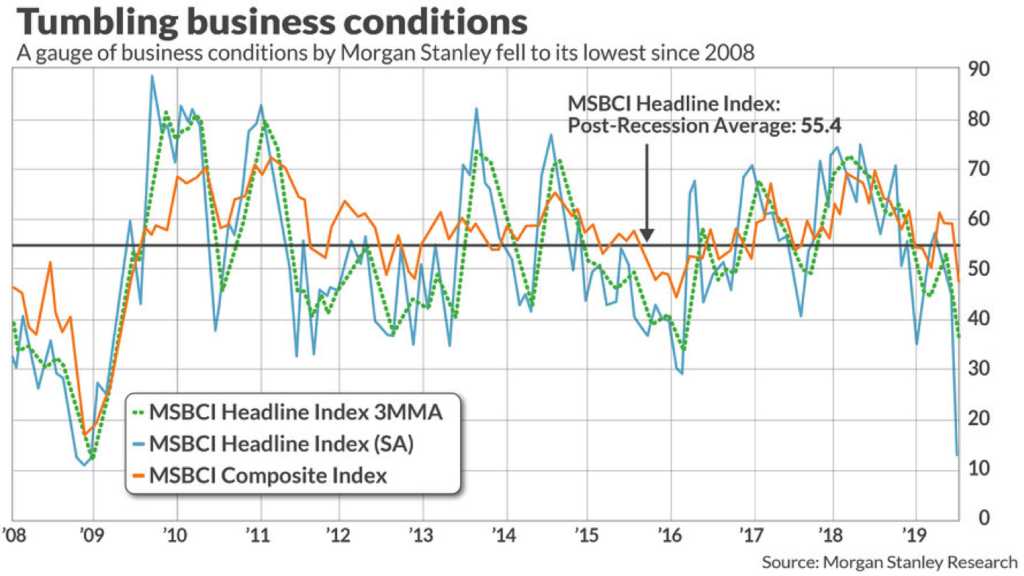 The MSBCI is substantiated by the yield curve. The three-month Treasury bill’s yield has remained higher than the yield of the 10-year Note for five weeks. According to research by the Federal Reserve Bank of New York, based on the yield spread, there is about a 30 percent chance of a recession starting a year from now. It isn’t my intention to be sanguine or to contradict myself. While I remain invested in the stock market for myself and for other growth-oriented investors, I also remain keenly aware that there are some signs that my dreams of a higher stock market may come true for only a brief time before stock prices are waylaid. I remain invested but on alert.