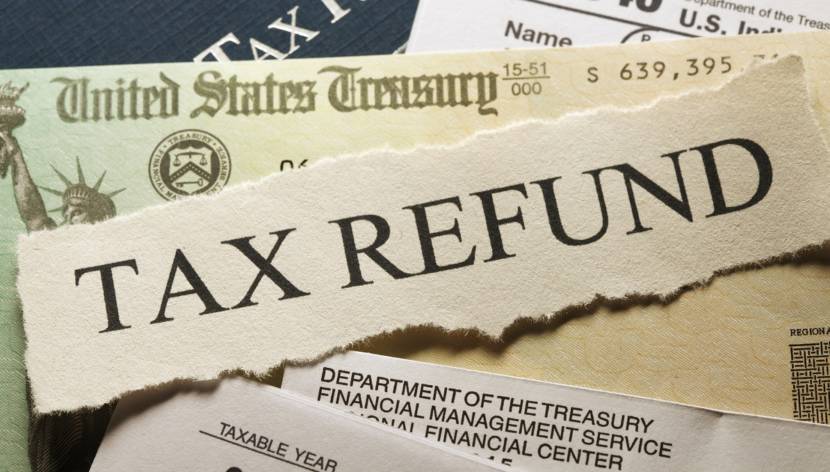 Dalton — Prepare for a lecture. I assure you, its tough love—well, maybe lighter on the tough and heavier on the aggravating. I’m in the business of managing money. And when I see someone doing it wrong, l lack an appropriate level of social tact in expressing my frustration.

So I’ll tell it to you straight—stop getting tax refund checks!

By no longer getting a tax refund check, your annual income will actually increase.

Refunds are received by people because they give interest-free loans to the government all year long. That’s what a refund check is—you’re just getting back your own money, money you asked the government to put in the non-interest-bearing piggy bank for you. It’s the money of American citizens who chose to pay too much in taxes from each paycheck, giving up all access and claim to it until they get their refund.

For most Americans, their biggest annual windfall is their IRS refund check. Seventy-eight percent of Americans households receive a refund, and the average is six weeks of take-home pay. Think about that: They take a month and a half of pay, tell the government to hold onto it—for free—and have absolutely no claim to it in the interim. So 90 percent of your annual income comes to you as traditional wages, and 10 percent comes as the return of money you should have already received.

Part of the problem is what behavioral economists refer to as the status quo bias: People don’t like to even think about change so they opt to accept the default withholding of their company’s payroll. But they don’t have to. You can change your withholding amounts and make more annual income. More on that in a moment: First, we need to tell you the downside of you earning more money.

When it comes to people getting tax refunds, the good news for the economy as a whole is that there is a sharp increase in spending after tax refunds are received. People spend their tax refunds differently than they do traditional income. Much of it is spent on consumer durable products such as appliances, electronics, jewelry, and firearms. Without tax refunds, certain parts of the economy would have to risk changing their sales projections.

Money is fungible, but people don’t treat it as if it is. People will put “rent money” in a jar next to a jar for “vacation money” and never take from one to pay for the other, treating it as if it’s not mutually interchangeable. If you’re in the business of selling consumer durable products, you’re an unhappy camper because a lot of people are complaining that their tax refunds are lower. On average, that’s not true. On average, tax refunds are actually up slightly at the time of this article (there’s another month of returns to go, so that may change). But you know the people who received smaller refunds because they’re very vocal about it. And they are likely to alter those annual shopping habits because people do treat tax refunds differently than traditional income.

The people complaining about smaller tax refunds are ignoring the math of it all. The amount of income one receives throughout the year includes traditional paychecks. And due to the changes made in the 2017 Tax Cut and Jobs Act, withdrawals through the year have been less, so total income has been higher. But people don’t feel that way because people treat tax refunds differently. They buy that refrigerator they needed, for example. But sometimes they also pay down credit card debt, which you may think makes them financially responsible, but that’s not true. Paying down credit card debt with a tax refund is an example of a really bad financial decision. It means that they were buying stuff on their credit card, racking up debt with double-digit interest rates, when they could have just taken out more income from their paychecks and paid for that same stuff with cash.

You deserve to receive your income when you get paid. Change your withholding and stop treating IRS tax refunds as if it’s some sort of windfall. It’s your money. Put it in your pocket now. And that’s how you earn more income. What you make is a net factor, not a gross factor. Your annual income includes cash you deposit from your paycheck, but also the additional interest you’ll earn by taking more of your money now. Also, by having access now to that money you can earn interest on, as opposed to the government holding it, you do not have to rack up as much double-digit credit card debt through the year.

The stock market had a tough week last week, ending down over 2 percent, the worst week for 2019. The week was capped Friday by the biggest miss of a payroll report in more than a decade. The consensus expectation was a gain of 180,000 jobs but, instead, we got only 20,000. Interestingly, looking at the past 10 times the payrolls missed by a similar amount or more, the S&P 500 actually averaged a gain of 1.41 percent on those days, with gains nine of those times. It was down nominally on Friday.

As I’ve been quick to point out in previous articles, we were expecting a price drop, and it looks as if we’re about in the middle of it in terms of both duration and magnitude. A further drop of about 2 to 4 percent over the course of the next one to three weeks would be a perfectly normal correction. Actually, that’s rather conservative, given the massive rally we’ve seen from the Christmas-Eve lows.

I had explained in previous articles that we needed to break two lines of resistance to go higher. The first line was at 2,740 on the S&P 500, then at 2,813 points. Given that we broke one, it’s entirely possible that the resistance at the bottom is pretty much exactly where we are as I write this article (the S&P 500 closed at 2,743). But since we failed to break 2,813, there is a greater probability that the short-term bottom will be about 2,632 points, down about 4 percent from here. Hold your positions for now. It’ll be a bumpy ride, but it won’t be anything stock investors shouldn’t be used to. And I’m not being cavalier. It’s literally the type of move that happens, on average, three and a half times per calendar year. But if information changes, I’ll consider it and warn you as to any changes.