Dalton — In last week’s column, “Corona Crash,” I wrote that we could get a “rip-your-face-off rally.” A 20% gain in three days — Tuesday through Thursday — certainly qualifies. Even sandwiched between big down days, the Dow ended the week up 12.8%, its best week since 1938.

Of course, that came off the heels of the worst week since 1932. The ups and downs (especially the downs) have been crazy. For the month of March, through the 27th, the average daily change for the S&P 500 has been 5.2%, exceeding the previous record of 3.8%, set in 1929. Is this massive volatility and a rip-your-face-off rally a sign to buy? Or was it just a relief rally driven by exhaustion of sellers coupled with covering short sales? Probably the latter — we had gotten to a point where most anybody who wanted to sell had already sold. As to whether it’s a good time to buy or not, obviously that depends on your investment horizon: days, months or years. Yes, I can see how that answer could be construed as a cop-out or deflecting from a “real” answer (though it doesn’t make me wrong). Let’s ask a different question, a two-part question: Was the low in the markets last week the final bottom? And if not, how do you safely get reinvested back into the equity market?

I hate burying the lead, so I’ll give the quick answer, then expound after. I don’t think the final low has been made. Unfortunately, I am less sure of that call than other bottoms. I can use virologists’ models to determine when COVID-19 outbreaks will peak in coronavirus hot spots like New York. Using those models, I can reasonably determine the pace of businesses getting back online. But what I can’t do is figure out is how many new hot spots will rise. Right now, it looks like Michigan, Illinois and New Orleans are becoming new hot spots, which means that even as some states, including Massachusetts, get back to work, other states may be beginning their lockdowns. Regarding when the stock market bottoms, I fear that COVID-19 is going to dictate that timeline. As I said before, right now it’s less about predicting and more about observing and reacting.

I am currently uncomfortably conservative in investment portfolios: If the stock market begins a sustainable rally, I’m going to feel the pain of being left out. The good news is that it won’t be that much pain because of my use of buffer funds, which allow for both protection on the downside as well as being able to participate on the upside. But that upside is capped. For example, a couple of the funds I use are repricing on April 1, and they will protect the first 9% or 15% of losses while providing an opportunity to experience 27.66% and 20.43% returns over the following 12 months respectively (estimates as of 3/30/2020).

However, I don’t want to be too complacent in that strategy. I’ve got a feeling that when we come out of this, the economy is going to be on fire due to the massive amount of fiscal and monetary stimulus being pumped into the economy. The 12-month return from stock market bottoms after big shocks tend to be fantastic. For example, as you can see in the graphic above, from the bottom of six selected downside shocks, the average return was 43.3%. Even when dropping the largest decline (and the largest return) in the series, the average return was still 38.24%. A 27.38% cap seems pretty attractive until you lag the market by 10 percentage points!

Listen, I get it that most of you aren’t in these buffer funds. I find weird things to invest in sometimes. Because of my affinity for oddball strategies, if I tell you what I’m doing, you may not be able to follow that game plan perfectly. (And let’s throw in the usual disclaimer that maybe you shouldn’t follow my game plan because I don’t know you, your situation, your financial plan, yada, yada, yada.) However, what I am doing can be a template for your consideration, or at least an agenda item when you talk to your financial planner about possible investment strategies. The outcome periods for the buffer funds I own are in April, June, July, October, November and January. I am considering a sort of dollar-cost-averaging back into plain-vanilla equity ETFs as some of those buffer funds hit their outcome period. And that’s the template I’d suggest you consider: Don’t try to pick the exact bottom, reinvest back into the equity portion of your investment portfolio, the portfolio that reflects your personal financial plan, every month for the next 3-9 months depending on your risk NEED (as opposed to your risk “tolerance”).

I am also considering what I want to continue holding. I think I’ll be holding my investment grade bonds, not necessarily because they’re a good value at the yields they are offering, but because I want to play on the same team as the Federal Reserve. As part of its whatever-it-takes effort to mitigate the magnitude and duration of the COVID-19 recession, the U.S. Federal Reserve is buying Treasury bonds and mortgage backed securities to help keep borrowing costs low. In an unexpected turn, it also announced that, for the first time, it’ll be buying $100 billion of newly issued corporate bonds, existing investment-grade bonds and — get this! — exchange-traded funds that hold highly-rated debt. What?! What?!

It is unprecedented for the U.S. government to own the corporate debt obligations of private businesses. About a week or two ago, I held an investment roundtable and one of the biggest “quiet” concerns of the group was the disjointed pricing of bonds in the credit market. Apparently that was a concern of the Fed, too, as the intention of this action was to open market activity as the bid ask spreads were becoming strained. During that investment roundtable, I noted that one of the clues that led me to sell equity ahead of the Financial Crisis was that, in June 2007, I couldn’t sell a Ford bond at a good price. I know that seems rather small, but it shouldn’t be a struggle to get a good price for a Ford bond. That was just one company, and it concerned me. So you can imagine how concerned the Fed was since this was occurring more broadly in the bond market, hence the bold action to, as it put it, “support smooth market functioning and effective transmission of monetary policy to broader financial conditions and the economy.” I cannot yet see around the corner to determine what will be the unintended consequences of this move, but in the nearer term, it means buying pressure for investment grade corporate bond ETFs and their holdings. I’ll let you know if I ramp up allocation, but I’m certainly not looking to sell at this point.

The recession we’re in

One trick I’ve historically reliably used to track the chances of a coming recession was to watch the gradual rise in initial claims for unemployment insurance benefits. For the week ending March 21, initial claims soared from 282,000 to 3,283,000. Previously, the most initial filings were almost 700,000 back in 1982. This sudden stop is unprecedented. The closest comparison I have is the couple days after the 9/11 terrorist attacks — except for airlines, businesses continued to operate. This time, businesses have immediately laid off workers. Last year a survey by the Fed found that almost half of Americans effectively live paycheck to paycheck, which means that the economy is going to take a big immediate hit.

The next wave of damage to the economy will be from the baby boomers, who are feeling the pain of their much-diminished wealth as the stock market has gotten crushed. That will slow down discretionary consumer spending. The next wave could be a sharp pullback in business investment, especially from the energy industry that is bearing the weight of a collapse in oil prices. The massive $2 trillion stimulus package signed into law to help households and businesses will certainly help, but there is surely going to be a surge in business bankruptcies and damaged personal balance sheets. Coming out of this, that stimulus package is going to be rocket fuel for the economy and, I hope, for the stock market along with it. In addition to the size of the government response being helpful, we can also be thankful for the expedience. Typically, the recession is almost over by the time lawmakers get around to pumping stimulus into the economy. The pace and magnitude of the reaction this time is shockingly fast. For comparison, consider the graphic below comparing the pace of fiscal stimulus now, compared to the Financial Crisis. 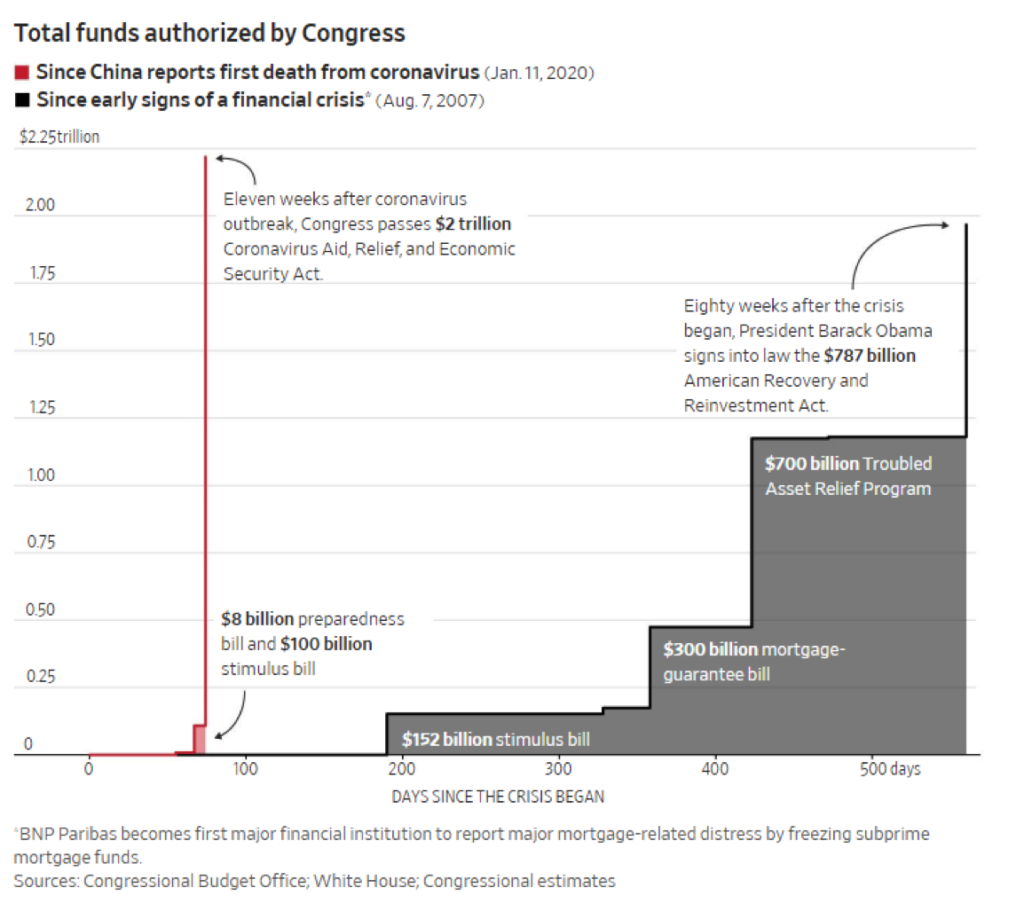 Similarly, consider how fast the Federal Reserve has reacted. 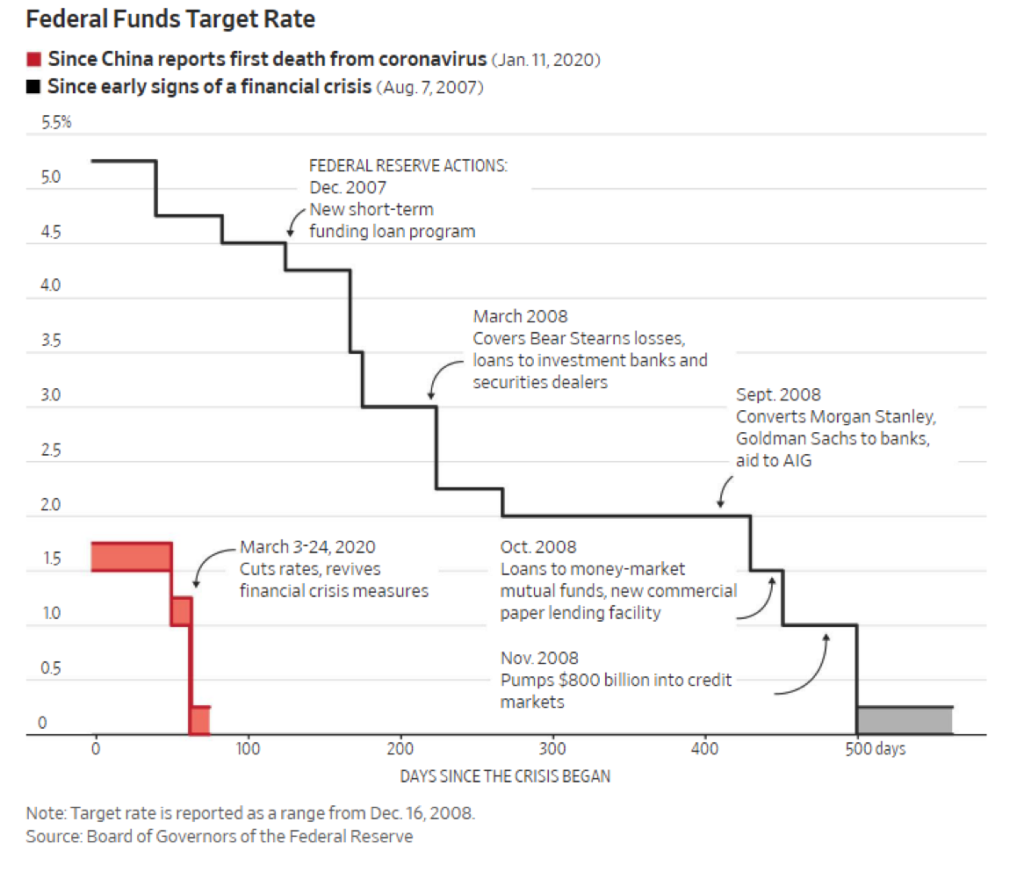 As I said, I don’t feel confident in calling the spread of the virus and the governmental reaction to it. I just don’t know how many more city and statewide lockdowns there will be, and how long they’ll drag on. The Federal Reserve’s and the government’s massive and quick actions should stabilize what has been an economy in freefall, but we won’t escape a recession. Depending on states’ shelter-in-place and quarantine reactions, next quarter could see drop of 5%, following what will probably be a negative-to-flat first quarter. The third quarter shouldn’t be as bad as the second, probably down a percent or two, but it will still be a bad year overall. (For comparison, Q1 2008 through Q3 2009 GDP was down about 3% each quarter).

If the U.S. gets back to work by Easter, as President Trump says he hopes, then I’d be comfortable saying that the stock market has found a bottom, even if it needs to retest those lows. If I were comfortable with that timeline, I’d be all in on the stock market today. But like I said, the virus will dictate the timeline. When the virus says it’s time to get back to work, the economy is going to have a lot of fuel to pour on pent-up demand. If I was a gambling man (and I am), I’d say that the stock market was low enough to call it a bottom at 2,200 points on the S&P 500, but as massively bad economic news rolls out in the weeks to come, the stock prices will retest those lows and probably challenge the 2,000 level in late April or early May. I’m thinking Buy-in-May-and-Make-Hay. But, since I only gamble with my life and not my money, I’ll continue to observe and react.