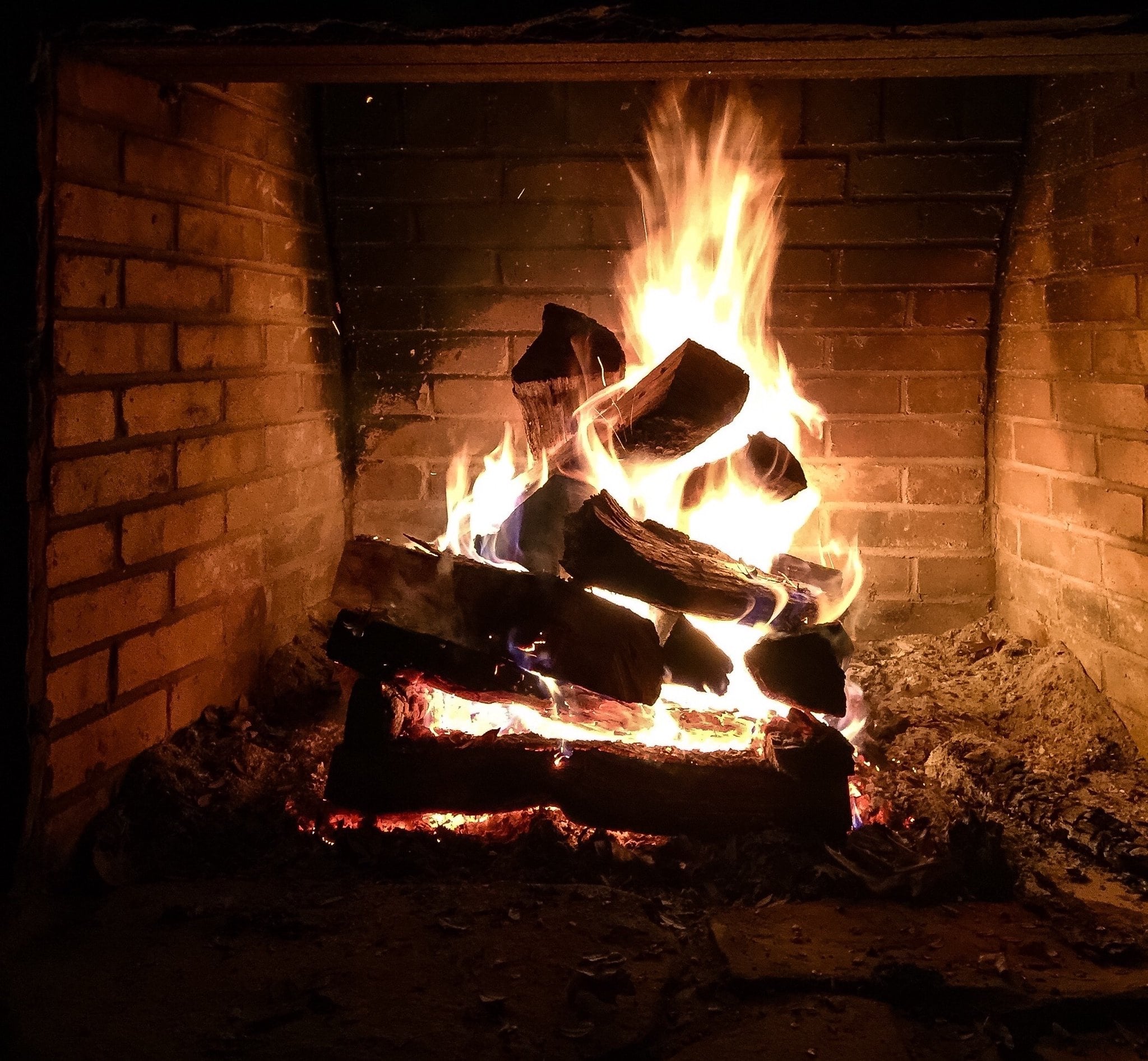 Dalton — The stock market has been on fire for the first half of the year. Can we keep that fire stoked? I am constructive on the market’s prospects for the rest of the year. Of course, for me, the worrywart that I am, that doesn’t mean I necessarily expect double-digit gains in the major stock indices before we hit 2020. We may; we very well may. But for me, I’m all about risk management. It’s about keeping that fire burning, but at the same time not letting it get out of control.

It’s the big mistakes I like to avoid. For the rest of the year, the market might give us some gains. But more important to me, because I’m patient with gains and impatient with losses, I suspect any correction in the stock market will be temporary, and brief. And, yes, I did allude to corrections occurring—that’s just life in the markets. What’s important to an impatient fellow like myself is that I don’t expect anything that will upset the financial planning of long-term investors.

I did say that I’m patient when it comes to gains, but come on! The market only last week popped its head above the high it set in January 2018. That’s almost a year and a half of nothingness. Well, I mean, if you went to sleep in January 2018 and just woke up, you missed a 20 percent crash and other corrections. But besides that, then, yeah, nothingness.

My point is that I’m empathetic to investors who have felt as if they’ve been running in place for the last 17 months. The next six months may finally give you the returns you were hoping for. But depending on your level of expectations, I doubt it. In the beginning of the year, I argued that the market would challenge the highs of 2018. We’re about 1 percent above them as I write this, so we already got everything I was expecting for the entire year. It’s entirely possible we’ll get a few more percentage points, but that’s not very brave of me to say. The stock market was built to be volatile—a few percentage points up or down are nothing. We all want something bigger than a few percentage points more than 17-month-old highs. The wait for those big returns is getting frustrating. The good news is that there is some safety in waiting for the rest of the year, if we end up needing to.

Given the wild ride the stock market has had between January 2018 and now, it isn’t surprising that bullish sentiment is rather low relative to highs in stock market averages. For me, a contrarian, that’s a good thing. I don’t want everybody feeling bullish, because if everybody is bullish, that means everybody has bought stocks. Since the price of anything, including stocks, is a function of supply and demand, when everybody has bought stocks, then there are fewer potential buyers to step in. That leaves prices vulnerable to a shock. Individual investors, as measured by the American Association of Individual Investors Investor Sentiment Survey, were seemingly caught off-guard by recent market gains, leaving cash available on the sidelines to be put to work. Given that bullishness is low relative to well-performing stock indices, that is fuel for the fire. That makes me feel as if it is safe enough to stay invested for the rest of the year, as we either break out to higher highs or assess any need to get defensive. Below you can see, similarly, that the number of Bears in the AAII survey is still a bit above the historical average (which is also good for stocks). 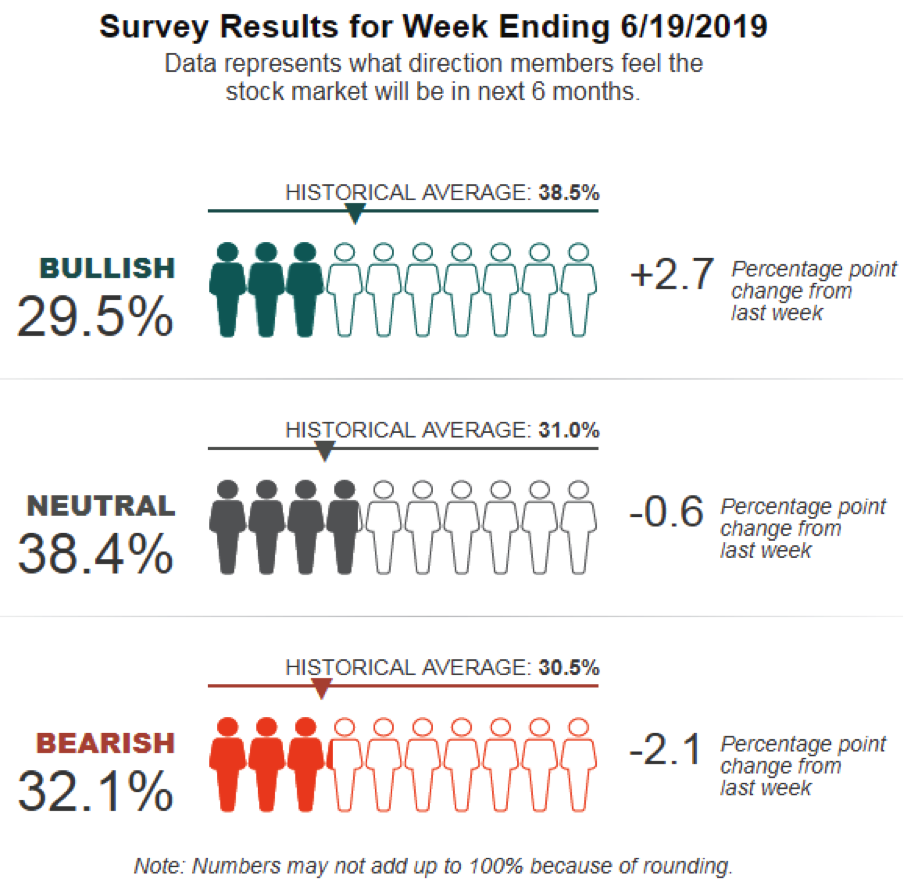 Federal Reserve and trade policy continue to be critical to the outlook of the markets. We’ve got a Federal Reserve that is willing to cut interest rates if a trade war dampens economic growth. While the Fed left rates as is last week, about half of the voting members argued to cut rates. Also, we’ve got a U.S. president who seems more willing (at least for now) to make a trade deal with China. When President Trump meets China’s President Xi this week, a deal doesn’t need to be struck to make the market happy. A couple tweets about it being a “tremendous meeting” will be enough to put smiles on the faces of traders. But if nothing too overtly constructive comes out of the meeting and instead the trade stalemate lingers and/or the next round of tariffs on Chinese imports is enacted, you’ve got a Fed that’s willing to cut rates to help stave off damage to the economy.

I feel like the Fed and the president have the backs of investors. That’s enough to help me feel safe for the rest of the year. But without a trade deal, I just can’t get overly optimistic. Without the clarity of a trade deal, I do not expect companies to be confident enough to expand their capital spending, which will keep corporate earnings flatlined for the remainder of 2019. According to Refinitiv, consensus estimates for corporate earnings are about zero for the next two quarters. That keeps my optimism tempered and my expectation of further big equity gains for the rest of the year low. Still, the right mix of trade talk and Fed chatter could cause either a steady run of gains or even a melt-up. The risk is to the upside—for now.

Looking out to 2020 could be a different story. Listen, I hate to be the bearer of bad news, but if I don’t tell you, who is going to tell you? Economically, things are looking ominous. I’m a fan of tracking what could be leading economic indicators. While I admit that many of those indicators are bullish, the bearish indicators are, one by one, building up. For instance, the shipping industry is seeing some signs of a slowdown. Last Friday, the Merrill Lynch Truckload Diffusion index dropped to its lowest level since October 2016. The index, which tracks freight hauling, is down 29 percent from last year. The Cass Freight Index, which is broader, has fallen for five straight months with shipments down 6 percent from last year. It’s entirely possible that these metrics could improve rapidly if the trade talks also improve. However, the math doesn’t add up that all the weakness is due to tariff issues. It has a lot to do with global economic weakness, Asia admittedly included. The shipping industry is essentially the arterial system for the economy. These negative signs are beginning to bleed from the international arena into the domestic economy. The author of the Cass Freight Index Report said that this last data series has moved the index from “warning of a potential slowdown” to “signaling an economic contraction.” To be sure, the index has gone negative before without being followed by negative gross domestic product, or GDP (the broadest measure of economic output). But it supports my notion that the economy remains vulnerable to the deteriorating trade talks.

I’ll spare you the redundancy of detailing what has been a well-covered story of Iran attacking oil tankers as well as a drone and the possibility of the U.S. reciprocating by way of military force. Geopolitical tensions always have the potential of being a wild card that upsets all economic and investment expectations. The U.S. did announce that it would send an additional 1,000 troops and other military resources to the Middle East but, so far, have opted against using force. I’ll keep an eye on this for you. Not to overlook the tragedy of potential lost lives, but the global stock market’s past reaction to U.S. military strikes, while negative, have been short in duration. Over the past 30 years, there have been 14 instances of U.S. missile strikes that have occurred outside of a declared war. The global stock market reaction, as measured by the MSCI AC World Index, has been mixed. About one-third of the instances were negative over the next five days of the strike, with average returns at only negative 0.1 percent. And that average was dragged down due to strikes that occurred during the Asian financial crisis of 1998 and the global financial crisis of 2008. Oil prices tended to rise, but the U.S. dollar and bond yields changed very little. 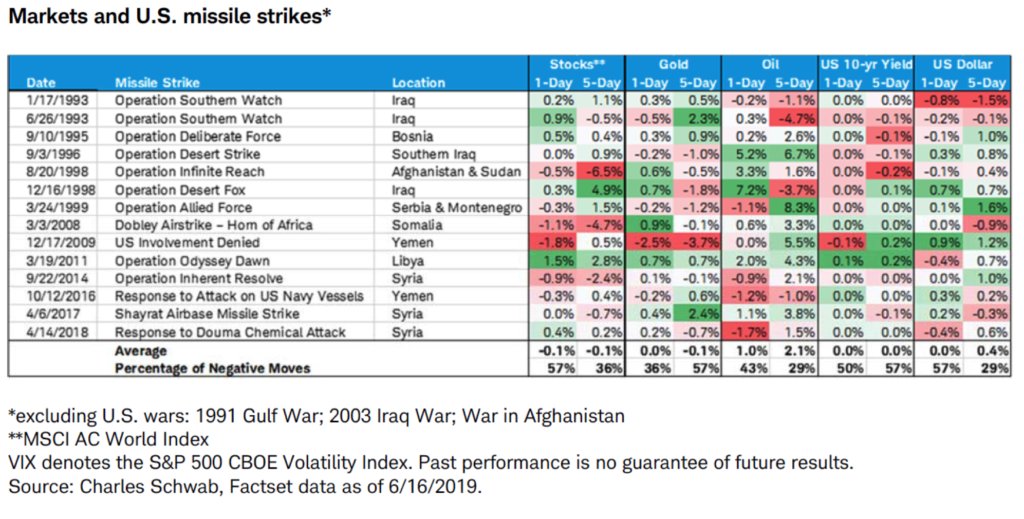