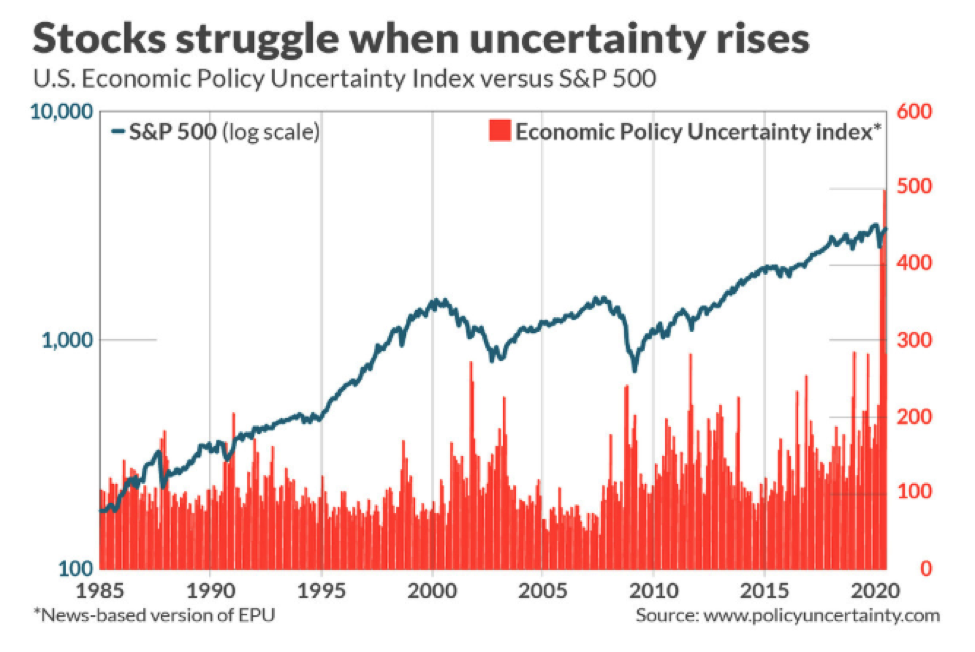 Dalton — I’ve got a theory. And if I am right, the stock market is going to hit a short-term peak right about: NOW!

OK, here it is. In response to the coronavirus pandemic, lots of countries are stimulating their economies via monetary and fiscal policy, right? Spain. The United Kingdom. France. Italy. Germany. Japan. Brazil. Canada. Australia. Turkey. Argentina. Indonesia. Saudi Arabia. Russia. Mexico. The U.S. And guess who else? China.

OK, the good news is that when we finally get past COVID-19, whatever that looks like, there is going to be a pretty rockin’ economy. (Well, so long as the U.S. does the right thing and passes another fiscal stimulus bill to support cities and states.) But there is still more stimulus to be had, and I think China’s President Xi can get a lot of return on his money by doing whatever he can to make President Donald Trump lose his reelection. The best way for Xi to accomplish that goal is to mess with the U.S. stock market.

President Xi doesn’t need election rigging or any other storyline under that category of a conspiracy theory. I’m talking about good old-fashioned strategy. And Xi didn’t start it, Trump did. Well, perhaps that’s not fair for me to say. Everything is alleged right now, but based on the allegations, I wouldn’t say that the Trump administration was out of line.

Washington ordered China to vacate its consulate in Houston because it was involved in visa fraud, spying and research theft. Allegedly those actions were not new to the consulate but had increased throughout the last few months.

In retaliation, China ordered the U.S. to close its Chengdu consulate. China has made it clear that it blames the U.S. for the heightened tensions, which gives Xi cover to shake things up for Trump. Everything pre-COVID-19 seems a million years ago, but it wasn’t that long ago when the U.S.-China trade war rattled the U.S. stock market. The economic impact of the coronavirus will matter more in the medium term for the stock markets. Still, during the next 97 days, until the U.S. Nov. 3 presidential election, Xi can make a lot of noise, disrupt the stock market and make it harder for Trump to get elected. That is the stimulus China wants: a sitting U.S. President who won’t impose tariffs and who won’t start a trade war.

What does that mean for investors? So far, this is just a theory, so I wouldn’t sell anything other than your weaker-performing equity positions, mainly because we’re just talking about the next few months. However, if you’re sitting on cash and wondering when to buy, I wouldn’t fault you for sitting on that cash for the next few weeks to see how this plays out.

Although, President Xi throwing shade on the U.S. stock market may not be the only reason to consider selling weaker positions and holding cash just a few more weeks. The stock market tends to be challenged going into elections because it hates the uncertainty regarding economic policy. And boy oh boy, according to www.policyuncertainty.com, U.S. economic policy uncertainty is through the roof.

With the benefit of a bounce and trillions of dollars of stimulus, the stock market has been going up in the face of rising policy uncertainty. Still, it’s a headwind for stocks over the next few months. There is a possibility, fleeting as it may be, that we’ll have more clarity on policy soon if Congress can write a new fiscal stimulus bill that President Trump would sign before the recess in August. (As I mentioned last week, there is a rumor Congress might work during the first week of August. I remain hopeful but skeptical).

It seems to me that writing such a bill should be easy. Both Democrats and Republicans want to spend $1 trillion or more. There are more than 10 million people who need jobs, so let’s spend it on a federal jobs program. Schools need to be built. Airports need to be upgraded. We need improvement in accessing clean water and broadband. The world needs to be sanitized. Work on these projects could begin quickly. That would force private employers to compete with the government, which would raise wages, and attract and retain workers there. It’s a creative plan if I do say so myself.

Back to Xi’s creative plan: There are some things the White House could do to combat China’s attempt to make life difficult for President Trump. The U.S. has its own fortunate stimulus opportunity. According to Black Knight, approximately 13.6 million homeowners could save $283 per month on their mortgage payments by refinancing in response to lower mortgage rates. That’s $46 billion annualized.

Those monthly mortgage savings will be overwhelmed if Congress allows the $600-per-week plus-up on unemployment benefits to expire Friday, July 31. That may or may not happen (again, there is very heightened economic policy uncertainty). The expiration of the $600 weekly plus-up could cause more renters and homeowners to miss payments. According to Apartment List, more than one-third of Americans could not make full, on-time rent or mortgage payments in July. That was up slightly from June and was the fourth month in a row that a historically high number of households were unable to make those payments. 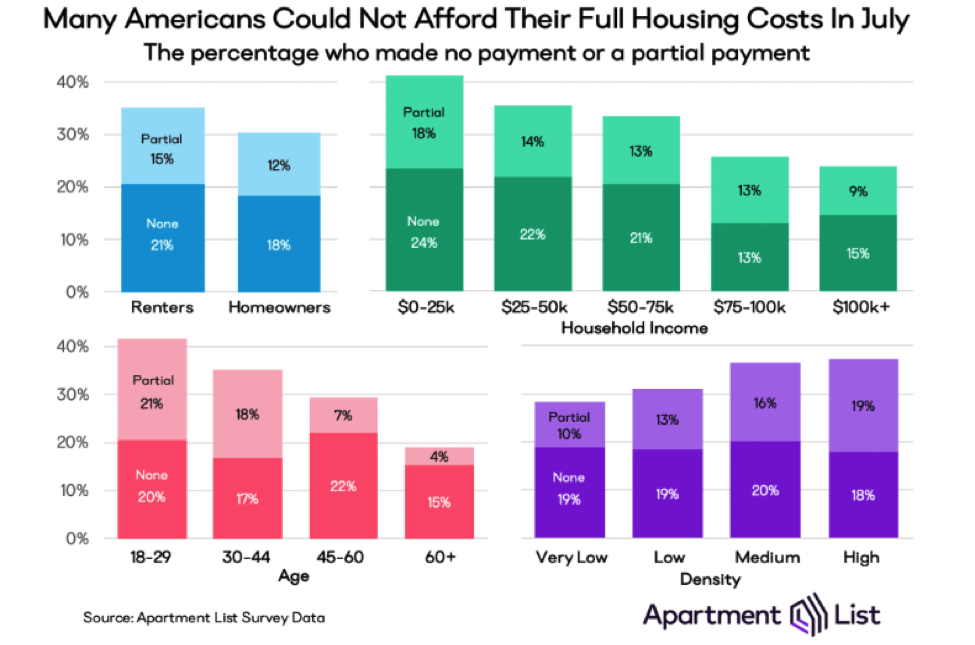 Those numbers are likely bumped up because when the pandemic started, a federal eviction moratorium was put in place to protect those who live in buildings or homes with mortgages that have some form of government backing. That moratorium was covering about one-fourth of the renters and homeowners. However, that moratorium expired last Friday (though landlords are required to give 30 days of notice before filing an eviction complaint in court).

Some cities and states have created their own eviction bans; however, without some federal legislative support extending the moratorium, a wave of evictions could flood the system this fall and winter. Republicans tend to avoid the “moral hazard” of giving people money in specific ways, but maybe they should reconsider. I can make a pretty good case that if the White House doesn’t protect voters from losing their homes, they’ll get evicted, too.

Yet again, more economic policy uncertainty. And just the more reason to sell your weaker positions now to be ready to reemploy that cash over the coming weeks or months.