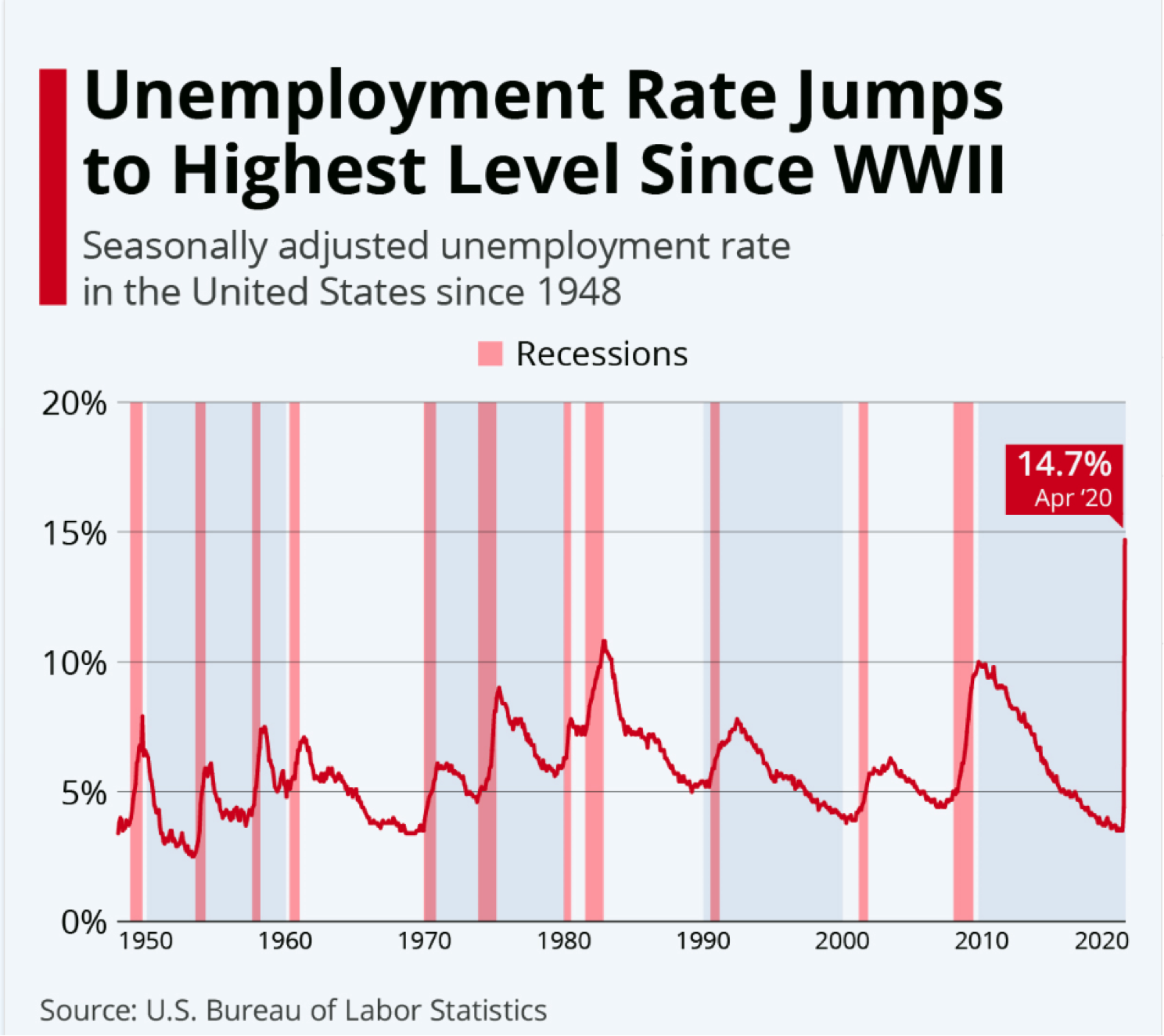 To put that in perspective, in the last couple of months, not only did the U.S. lose nearly four times as many jobs as during the Great Recession, but we lost more jobs than we had created in the decade-plus since the Great Recession. 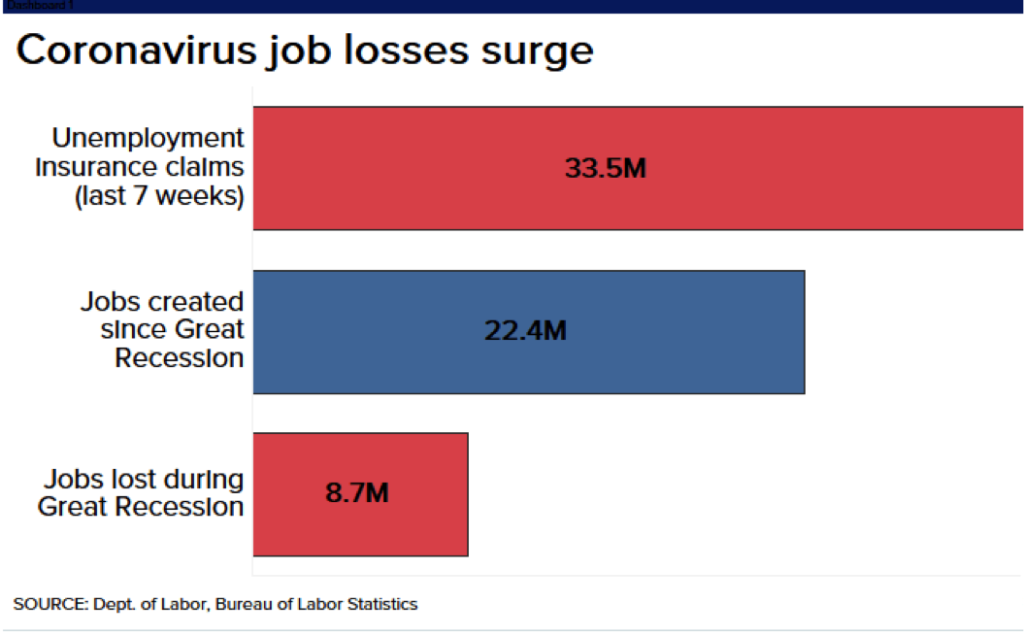 Yet the stock market has been on a tear. As I pointed out in a previous column, it doesn’t make sense on paper that the stock market is doing so well when things look so bad. In that column I wrote, “Don’t get me wrong: I’ve become more bullish over the last few weeks. But I am not going to lose sight of the risks. That being said, I also look out for the rewards. And a lot of the rewards come when everyone else is looking out for the risks; when everyone else is pessimistic and bearish, that’s when you can get the best returns.”

Given that many are still pessimistic and bearish, you probably won’t be surprised that, on April 28 and again on May 8, I reduced my hedges, my stock market protection. As readers will recall, I have been using a sophisticated put/call “flex-options” strategy in a relatively simple exchange-traded fund package (what I’ve referred to as “buffer funds”). I’ve still got a lot of my hedges on, but over the last couple weeks, I’ve reduced those hedges by almost 10 percentage points per portfolio. With something like 45 states either partially open or planning on opening soon, my biggest job will be to track any resurgence of COVID-19 outbreaks. I hate that my job has shifted from that of an economist to an ill-trained amateur virologist. However, I don’t really have a say in the matter. The virus is making all the rules right now, and I’m just along for the ride.

The coronavirus aside, the stock market typically does its best when the economy is moving from “very bad” to “less bad.” And that’s what we’ve had for the last month or so. Absent another virus resurgence, I’d expect that “less bad” could become “good” in about three years. Three years sounds like a long time considering the financial media and the stock market both seem to think we’ll get back to the world we knew by the end of the year. Firstly, three years is a bit faster than after our last crisis. Four years is about the amount of time it took after the Financial Crisis to get U.S. gross domestic product back to pre-crisis levels and cut the unemployment rate almost in half. I believe that after an initial and sharp — but partial — recovery, the remainder of the process of getting back to “good” will be protracted.

Four years after the financial crisis, as we moved toward being “good” again, the stock market doubled in value. A resurgence of COVID-19 outbreaks (and the accompanying shutting down of the economy to cease a spread of the outbreak) would likely push the stock market to new lows. But if we all manage the return to business, well, who says the market can’t double from its lows again? That would still put the Dow Jones Industrial Average at about 37,000 points in 2024. Given the amount of stimulus in the economy, if corporate tax rates aren’t raised back up to what they were before the Tax Cuts and Jobs Act of 2017, that’s not an impossibility, though I don’t suspect a rally like that would be absent some meaningful corrections. In the first couple of years after the Financial Crisis, there were a couple doozies: about 14% and 17% — nothing that we can’t handle, but still not very comfortable to go through. Given that there will probably be a lot of “temporary” job losses that may unexpectedly become permanent, it’s possible that investors will rethink stock prices and a doozy of a correction will happen sooner (2020?) rather than later.

With an absence of understanding what’s happening on the prospect of a COVID-19 vaccine, or the successful suppressing of an outbreak resurgence, I’m left with just my economic skills. And from what I’ve been seeing, I’m feeling comfortable removing hedges. I’ve advised and continue to advise readers to also reduce hedges (and/or decrease cash positions) periodically and get equity reallocated back to the levels outlined by your financial plan. What makes me feel more comfortable? Well, first I saw increased requests for driving directions from Apple Maps, then I saw a slight increase of Open Table bookings in states like Texas, Georgia and Florida (states where stay-at-home orders have been relaxed). That was consistent with a rise in gasoline demand over the last couple of weeks. And mobility data from Google shows a somewhat greater increase in states where stay-at-home orders have been relaxed relative to states where they haven’t.

As someone who sprays his credit card after the cashier gives it back to me, I was heartened to see this data and know that not everybody is like me — hunkered down and reticent to get out of the house. Yes, there are going to be a lot of people like me, afraid to get sick and to pass it on to their parents, and as a result, will not be doing much to contribute individually to economic recovery. As an investor it’s important to consider that not everyone will act like you — that you can’t apply your own narrative or bias to investment decisions when the world is, indeed, moving differently from the way you think. For example, I’m dying to live my best life and get back to Disney World and spend a week in Star Wars: Galaxy’s Edge. But I’m afraid to get on an airplane and then (literally) rub elbows with my fellow nerds. But if you squint, you can see an uptick in the number of passengers going through TSA checkpoints, so some people are. Also, Disneyland reopened to 30% capacity on May 11 in Shanghai, and tickets were sold out.

People do want to get back to social gathering, but there will continue to be a challenge in restarting the economy even as nonessential businesses reopen and many of us continue to self-quarantine. This will slow the recovery in terms of both output and labor. In the longer run, that may be good news, as it reduces the threat of a resurgence of COVID-19 outbreaks. But it also means that it will take longer for the economy to get move from bad to good.

We’ve been equal-weight on the health care sector, with some previous concerns about being overweight if Bernie Sanders had edged out Joe Biden as the Democratic presidential nominee. Obviously Biden is the presumed Democratic presidential candidate, but given that both parties had been seeking to lower prescription prices, and since we’ve been hedging a lot of our equity investments, we’ve been hesitant to go overweight health care. However, now we’re increasing our equity exposure, and we’re tilting toward that sector. Positive momentum in the health care sector has emerged, due in part to progress in the search for coronavirus vaccine and treatments. While it has had a good run recently, it’s valuation, based on the price-to-earnings ratio, remains two standard deviations below its long-term average, as calculated by Ned Davis Research.

Although we’ve all seen strains at our local hospitals and our frontline health care workers, the overall secular growth drivers of the health care sector remain intact. The U.S. population continues to see demand from an older population, as people are living longer and extending years to that demand. The number of Americans using nursing homes is projected to increase from 1.5 million to a potential 3.85 million in 2030, according to the National Institute on Aging. Additionally, according to estimates from the IQVIA Institute for Human Data Science, the number of prescriptions and use of pharmaceutical devices will continue to rise. IQVIA estimates that net spending on pharmaceuticals will grow +3-6% annually through 2023, outpacing U.S. GDP growth.

This is the type of equity I want to hold now — something historically defensive and minimally cyclical. Demand is relatively stable because people will require treatment regardless of the economy. Further, I expect the sector to benefit from continued mergers from pharmaceutical and device companies as they try to scale, cut costs, grow revenue and expand their international reach. This would help broadly, but it will also help from an innovation standpoint as drugmakers and device makers can then better focus on specialty care for smaller patient populations they couldn’t previously serve profitably.

In addition to the April 28 and May 8 moves of reducing hedges and increasing broad equity exposure, on May 11 I increased exposure to health care stocks for growth portions of investment portfolios. If you’re keeping track, depending on the portfolio, I still have as much as one-third (more in conservative accounts) of my equity allocation hedged by using buffer funds.