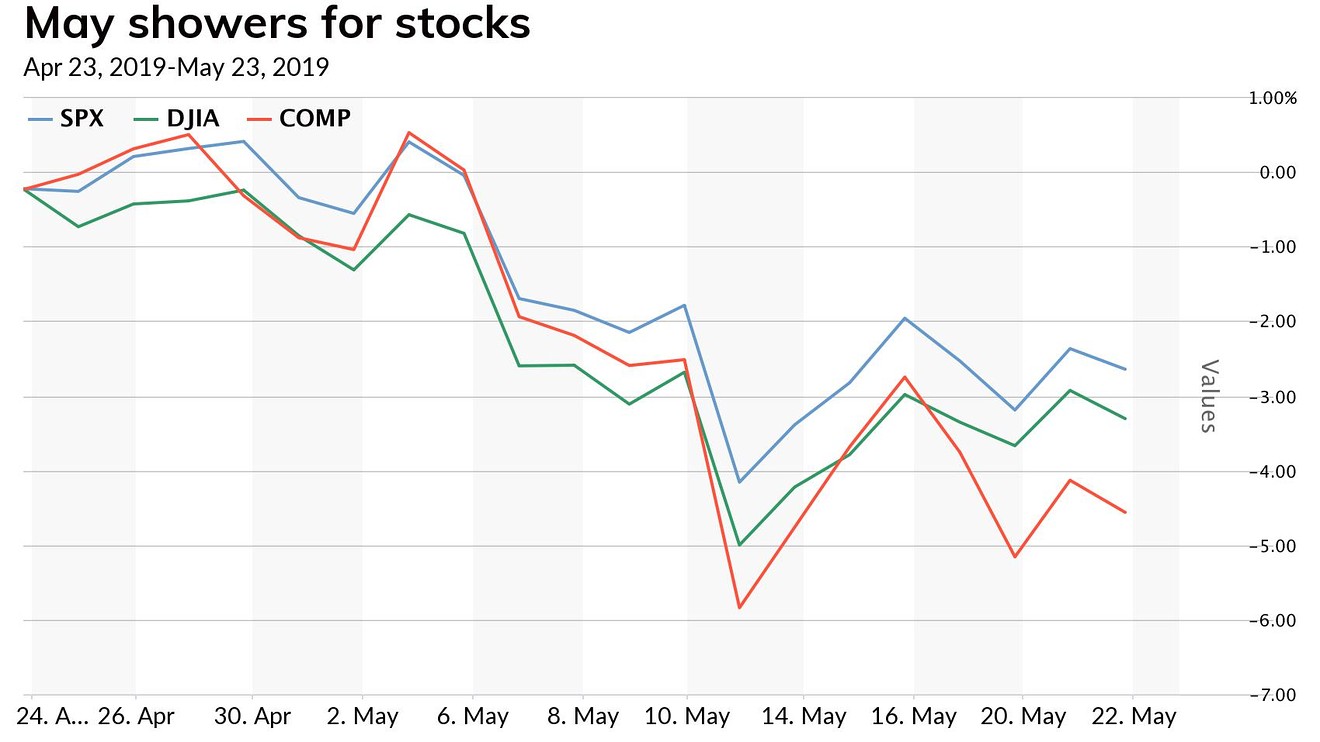 The stock market has dropped, but has it dropped enough?

Dalton — The Dow Jones Industrial Average ended last week down 0.7 percent. That was the fifth week of consecutive losses for the popular stock market index, its longest losing streak since 2011. Although the market was only down about 4 percent at the time, apparently that was enough to freak out a lot of people.

The American Association of Individual Investors investor sentiment survey was crushed last week, with bullish sentiment declining to 24.71 percent from 43.12 percent just two weeks ago, which was the highest reading of the year. That was the largest two-week drop in bullish sentiment since June 2013 and brought it below its historical average of 38.21 percent. The last time bullish sentiment from the AAII survey was this low was in late December of last year, and what followed that was a monstrous rally.

I come from the school of investing where we buy stocks when there’s blood in the street. For me, a contrarian, that drop in AAII’s bullish sentiment was most welcomed news. When bullish sentiment hits an extreme low compared to historical standards, the future performance of the equity market is typically stronger than average. That makes sense because the price of anything, including stocks, is determined by the law of supply and demand. At some point, at the zenith of panic and ample supply, all those who will sell have sold. When prices have been pushed down far enough, buyers step in and the trend of increasing supply is replaced with rejuvenated demand. And so begins a rally in price.

The AAII survey at its recent low for bullish sentiment is good news for those owning stocks. However, in this instance, there are some mitigating factors to go along with that good news. First, like many investment surveys, the measurements track bulls (those thinking stock prices will go up), bears (those thinking stock prices will go down), and neutrals. In this survey, bulls were crushed but bearish sentiment fell, which is atypical. It’s a lopsided victory.

Other surveys, like the U.S. Advisors Sentiment, was recently still at 49.5 percent bulls, which is near the “elevated risk” zone, while bears were only at 17.2 percent, which is too low to say the advisors have panicked alongside individuals. Also, the “Fear Gauge,” or VIX index, is showing borderline complacency.

It’s very easy for me to tell you what to do at extremes: Do what feels the worst and go against the crowd. But we’re not at extremes now; indicators are mixed. So what to do now? Just as the DJIA was about to enter its historical five-consecutive-week slide, I wrote, “I expect the market is going to dip 5 to 10 percent this year, maybe starting soon.” We’re halfway through the expected worst-case, short-term scenario, so I wouldn’t fault anyone for getting cash invested now.

Don’t be overly cute in trying to figure out the precise moment when to put your cash back into the market. If you’re currently invested, take this opportunity to cull your weaker positions and replace them with strong ones. But if you’ve got cash, put it into the market and accept that your timing will either be impeccable (doubtful) or that for the next few weeks or months, you’ll likely get a dividend return and modest up and down variance in prices before we find traction for the next rally.

One of the reasons I’m not overly excited about the stock market at this moment is because President Trump’s trade fight has completely offset the benefit of this administration’s corporate tax cuts to capital goods orders. The biggest such tax cuts in 31 years stimulated growth of core capital-goods orders, but then a slowdown in investment began after billions of tariffs were added to Chinese goods and scuffling with other trading partners. 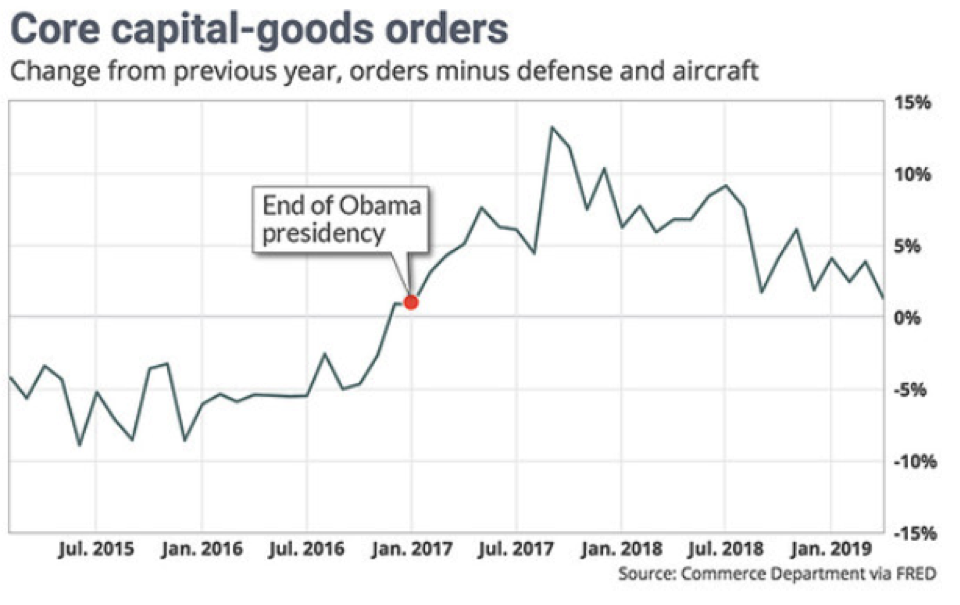 That’s not to say U.S. manufacturing can’t surge again once trade deals are negotiated, but until they are, it’s a drag on the economy and a drag on stock prices.

If I said it once, I’ve said it a thousand times: Financial advisors are the worst. When it comes to investing, you don’t need us. If all you’re interested in are returns (and most people are), just invest in a diversified portfolio; keep contributing; and never, ever look at it. (When human beings look at it, they do stupid, emotional things like buying more when it’s expensive and selling when it’s cheap. Bad humans!) Anecdotally, I’d say about 80 percent of financial advisors are there to just help investors get a return. There’s nothing wrong with that; it’s what most people want, and I do that for clients, too. But if you tell me all you want me for is to help you make more money than the market, I’m going to tell you that you don’t need to pay me for that—just invest in that diversified portfolio and every time you think about looking at it, come to my office so that I can flick your wrist with a rubber band. (Full disclosure: Nobody ever takes me up on that. Apparently aversion therapy isn’t very popular, so I’ve had to learn to employ other methods).

With any luck, very soon, other financial advisors will be forced to have similar “you don’t need us for that” conversations. If not that conversation, at least some sort of other honest conversation. Right now, unless you’re a Registered Investment Advisor regulated by the Securities Exchange Commission, a financial advisor does not—I repeat: does not—have to act in the best interest of their customers when they recommend stocks, mutual funds and other products. The SEC plans to vote June 5 on Regulation Best Interest. More than a year ago, the SEC tried to push forward a similar rule, called the Fiduciary Rule, but the anti-regulation sentiment of the day killed the effort that was first put forth by the Obama administration.

The Wall Street machine is basically a bunch of salesmen pretending to put your interests first, calling their recommendations “suitable.” I hate this industry. If, 27 years ago, I knew then what I know now about how sleazy the financial services industry is, I’d be in the pet care field. But I’m here now and I want to see it change. If we can finally get proper regulation so that investors aren’t being sold ridiculous annuities and insurance salesmen aren’t placing you in company products, not only will I do a happy dance, I’ll arm you with the language to bring to your broker to ask them if the investments they selected for you were in your best interest or if they were merely suitable. You deserve to know if your trust was properly placed.

Do you have enough?

On a bit of a side note, if you want to know where your savings compare to your peers, according to a joint report released last week by Fidelity and CNBC, the average 401(k) balance is $103,700. The balances vary depending on age. As of the first quarter of 2019, here’s what you need to have saved in your 401(k) to be keeping up with the Joneses:

Of course, you can invest outside of your 401(k) or 403(b) retirement plans. However, according to year-old Federal Reserve data found in the Report on the Economic Well-Being of U.S. Households in 2017, except for the wealthiest amongst us, this is by far our largest retirement account.