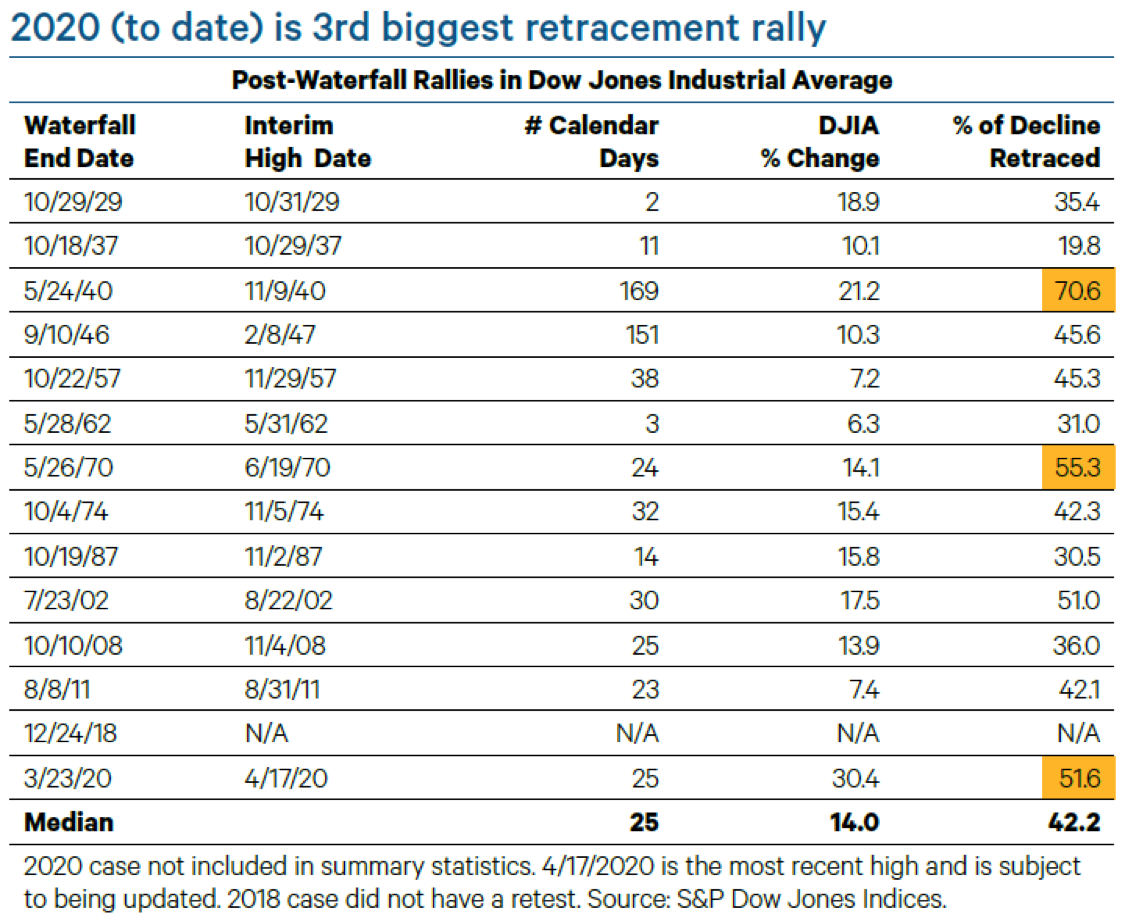 “I’d like to stop thinking of the present, like right now, as some minor, insignificant preamble to something else.” — Cynthia

Dalton — During periods of high daily stock market volatility, it’s easy to get overly fixated on the short term and lose perspective on the longer-term dominant trends. I’ve been guilty of focusing on the short term, having sold equity going into the stock market crash in an effort to lessen portfolio declines even though, in my heart of hearts, I felt then and still feel the stock market will again see new highs. It will be a valuable exercise to explore what we can make of longer-term trends to validate — or invalidate — some of the moves I’ve made in portfolios and shared with you in this column. As readers will recall, I’ve been using option strategies as a hedge to protect portfolios; however, we have been reducing those to get back into more traditional equity.

The February-March market crash was marked by intense selling, the magnitude of which we don’t need to detail because, likely, you still feel dazed from the gut-punch of it. Then selling dried up, as most everyone who wanted to sell had sold. No longer were there days of intense selling, rather the character of the market completely changed and the action turned to surges in buying. Historically, such a rapid expansion of buying only follows major market lows. I, for one, certainly hope history will repeat itself. As the buying continued and breadth expanded, it provided further evidence that the rally from the March lows could be more than merely a respite from an ongoing bear market, maybe even the start of a new bull market.

On paper, it’s hard to believe the stock market has done what it has over the last nearly two months. Unemployment is at its highest since the Great Depression. Manufacturing is at its worst since the Financial Crisis. Leading economic indicators plunged the most since the LEI index started being tracked. Corporate earnings estimates have been revised down at a record rate and “forecasts” of expected earnings are a virtual joke. Yet even as the three-week total of jobless claims hit 16 million, the S&P 500 had its best week since 1938. The eight-week total of jobless claims is now more than 36 million and the major markets are only about 15% off their highs.

However, even bull markets can be fragile in the short term. For example, during the market’s last attempt to build on the rally, from April 29 to May 8, the percentages of stocks above their 10- and 30-day moving averages (measurements of breadth) lagged the gains stock market indices. Given the strength of the rally from the March 23 low, I don’t suspect that any correction is likely to be the end of a continued bull market. But it could still be a doozy of a correction.

The 30.4% rally from the March 23 lows to the April 17 highs was bigger in absolute terms than any other post-waterfall decline rally (a “waterfall decline” is a sudden and precipitous drop in the stock market). The magnitude of the rally is adjusted in the graphic above to be shown as a percentage of retracement, in which case this has been the third biggest rally, after the 1940 and 1970 occurrences. The bad news is that there have not been enough instances to say that this historical evidence has statistical relevance. However, breadth thrusts and negative sentiment do have statistical relevance and do argue that the longer-term trends are more bullish than not. While this retracement data may not be statistically relevant, it does comfort me more to know that the bigger the retracement from the lows, the less severe the retest tends to be. Five out of six of the most painful retests happened after weaker retracement rallies, and three of the four mildest retests happed after above-median rallies.

Oh, and I do think there will be a retest, even if that retest isn’t another 24% drop from the April 17 high, which would bring the stock market back down to its March lows. I’m guessing it’ll be about an 8-16% drop from the April 17 high. Don’t get me wrong: That’ll sting. An 8% drop brings the market back to its 50-day moving average. A 16% drop brings us to some short-term technical support (if we break that support, we’ll probably reclaim those March lows after all, but I don’t think we will). Are you ready for an 8-16% drop? You better be. Even if everything goes as well as can be expected with the reopening of the U.S. economy and the suppression of a new resurgence of COVID-19 infections, I suspect there will be a fair amount of U.S.-China trade war tension going into the presidential election, as President Trump has already threatened new tariffs on China in retaliation for coronavirus. Those trade wars caused a 20% crash in the fourth quarter of 2018. Is it so outlandish for me to expect a 16% drop if that rhetoric heats up again Although, if I’m going to be more precise on my bets, I’d not expect those new tariff threats to be acted on until after elections on Tuesday, Nov. 3.

However, “precision” is nothing if not relative nowadays. I know that I’m the expert and that I am supposed to exude confidence in my predictions. It would be a lie. It feels impossible to predict consumer and corporate demand, which means I have no good handle on earnings, which also means I don’t know anything about valuation. Is the stock market cheap, which would mean that I’m foolish for hedging my portfolios? Or is the stock market expensive and thus my more conservative nature seems more prudent? I am struggling with my allocations nowadays. On the one hand, the stock market has had good breadth and got deeply oversold, and there is a massive stimulus in the economy from both the Federal Reserve and the Treasury, hence why I went from ultra-defensive to buying equity again (well, ultra-defensive for me — we all have our own definitions of conservative, I suppose). But on the other hand, there is the risk of a worse-than-expected retest of the March lows because, I think, valuations are awful. If it weren’t for the stimulus on top of the breadth and oversold condition of the market, I’d be completely out. Even considering low interest rates, I still think valuations are too high because earnings are so bad. I believe that until the end of July, earnings will continue to be lousy as businesses struggle with the reopening, consumers are slow to leave self-quarantining, and businesses lack the confidence to spend and rehire back to pre-pandemic levels.

Of the people working in February, more than 40% of those making under $40,000 per year were unemployed in March (I’m sure more by now). I know that the popular story is that those jobs will come back quickly, but I disagree. The University of Chicago found that employers expect that 23% of the layoffs since March would be permanent. What multiple of earnings would you apply to the stock market in a world like that? Would you give it a price-to-earnings multiple of, say, 20? Well, analyst consensus for 2020 earnings estimates is $128 for the S&P 500, down from $163 in 2019. Sure. Why not? It’s as good a guess as any. That puts the market at a 22.5 price-to-earnings ratio. According to FactSet, the average forward-looking P/E ratio has been 15.5 for the last two decades. Although that forward-looking P/E has crept up to 16.7 for the last five years, a 22.5 P/E seems high, even if it’s blending past and forward earnings. Consensus earnings estimates for 2021 is $166. That seems like as much of a guess as 2020 estimates but, sure, why not? At least then the stock market would be something closer to fair value at a bit over a 17 P/E at today’s levels. But let’s be honest about that $166 number: It’s total B.S.

Yes, I think more will go right than wrong in terms of both reopening the economy as well as the pandemic (although in January, I thought the coronavirus would be contained and I blew that call). But from where do we get multiple expansion? How do we go from a 17 P/E to a 20 P/E? I can make a good argument that the lows for this recession are in. However, I can probably only argue for a 20 P/E at best, which doesn’t get the S&P above its pre-pandemic high for another year, as the market starts to price in 2022 earnings estimates ($166 of earnings x a 20 P/E = 3,320 on the S&P 500, which is lower than previous highs). Just because I see limited downside risk (about an 8-16% correction sometime in 2020) doesn’t mean I expect tremendous upside. Hitting a 20 P/E multiple in 2021 expected earnings only gives you about a 16% positive return from today’s levels. You can see why I am still holding onto some of my hedges: the risk/reward ratio has too much risk in it for my comfort.

However, keep in mind the stock market does best when it goes from “bad” to “less bad.” We are certainly not out of the woods yet. U.S. gross domestic product for this quarter could approach a negative 40%: That’s not a typo. The Federal Reserve bank of Atlanta is currently expecting a minus 42.8% drop. The Blue Chip consensus and New York Fed are a bit more optimistic, at roughly minus 31% each. That’s bad. However, many professional forecasters expect that the U.S. GDP growth for Q3 and Q4 will top double-digit growth. What do I think? I’m not even going to try; it’s all complete guess. But I do firmly believe that we are going from “bad” to “less bad.” As scared and confused as I am, I feel as if I’ve got to own equity now.