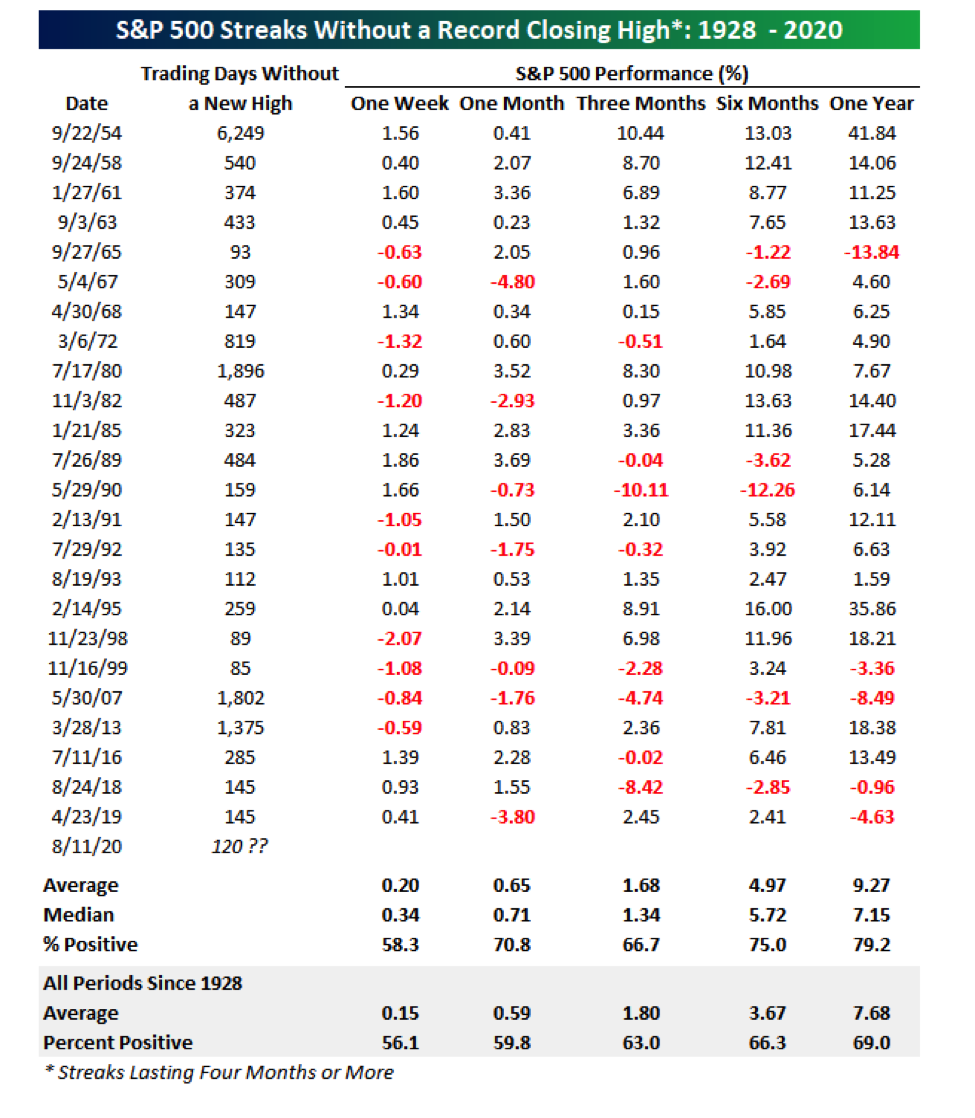 There is a chance the index will get above 3,450 by the end of the year.

Currently, the S&P 500 is a hair away from its Feb. 19 pre-pandemic closing high of 3,386 (as you are reading this, the index may have broken above that level). The question is: How will the stock market perform if it does hit new highs? The table above captures data through Aug. 11, 2020, and lists the periods when the S&P 500 went at least four months without closing at a record high and how it performed after that.

Historically, there is a three-month average gain of 1.68 percent once the S&P 500 hits a new high after going four months without previously doing so. That return would put the index at just seven points shy of 3,450. That leaves some room for the upside, thus it could prove me wrong by busting above my expected range for this year.

The fundamentals: hopeful but fuzzy

History is often a useful tool to set a template for what might happen. History and technical analysis are more important today because the fundamentals are mostly guesswork.

I just walked out of an investment committee meeting, refilled my coffee and sat down at my desktop. Many variables were discussed. Who will win the election? Will we get that fiscal stimulus package in September since we’re clearly not getting one in August? What abut the uptick of COVID-19 infections?

Of all the unknowable variables, COVID-19 is the wildest of wildcards. I am not investing as if there will be a cure, I am investing as if there will be progress. There’s not much difference in the way a “cure” portfolio looks compared to what a “progress” portfolio looks like. Either way, I am invested in the stock market with the expectation of long-term gains. Still, I’ll gladly take a stock market surge if a vaccine is created. It just means I am extra cautious, keeping my finger on the “sell” button because the economy is more vulnerable without a vaccine.

Regarding the presidential election, I can make pro and con arguments for the economy and the stock market based on either candidate winning. This seems especially true now that Vice President Joe Biden has picked Sen. Kamala Harris as his VP. Biden and Harris have both said in fundraisers that they don’t want to punish people for being wealthy. Also, both have acknowledged that it’s crucial to rebuild the economy.

Regarding the stimulus package, the failure to pass anything meaningful (i.e., anything much less than $1 trillion to support cities and states) means a recession in 2021 is likely. Congress failed to negotiate a stimulus package in a timely fashion, so President Trump stepped in on Aug. 8 to sign executive orders. Shame on Congress for using the orders as an opportunity to take recess for the remainder of the month. The orders will help a bit, but only because they act as a temporary salve until lawmakers reconvene after Labor Day to work on a new stimulus plan.

Trump’s orders nudge federal departments to “consider” banning residential evictions, defer student loans, allow employers to delay Social Security taxes for employees, and extend the unemployment benefit plus-up, though at $400 per month instead of $600. It’s better than nothing, but I fear it’s not enough to keep the U.S. out of recession in 2021. I expect a package to be negotiated in September. However, because Congress is content with letting the U.S. economy burn through August, it will be that much more difficult to regain and maintain any economic momentum.

However, I may be the only non-perma-bear saying there is a high likelihood of a double-dip recession in 2021. I suspect that the stock market is going to ignore this risk for now. While a 2021 recession is a significant risk, I am not yet investing like it is — for now, I just need to be aware of it.

I expect some renewed volatility between now and sometime in mid-November.

Last week, the U.S. Postal Service warned 46 states and D.C. that it cannot guarantee all ballots cast by mail will arrive by Election Day. There is a chance that due to an abundance of mail-in ballots, we may not know the winner of the presidential election with the immediacy we are used to. Vice President Al Gore didn’t concede until Dec. 13 after the Nov. 7, 2000, election that gave George W. Bush the presidency.

Elections aside, due to its outsized short-term results, the stock market is frothy and exposed to renewed volatility. The S&P 500 is up 12 percent over the last couple months. Some consolidation would be a reasonable expectation, and that consolidation could mean sideways action or a correction.

Currently, the market thinks October is going to be the month for a correction.

Most of us are familiar with the VIX, which is short for the Chicago Board of Exchange Volatility Index. It’s also known as the Fear Gauge. I am going to spare you the details of how the VIX is calculated. What you need to know is that the higher the number, the higher the current volatility. Well, you know when you wake up before 9:30 a.m. and Bloomberg tells you the stock market futures? That’s a glimpse of what you should expect to happen in the future. The VIX has a futures market as well. Currently, the VIX Oct. 21 futures (which covers the election date because the periods of Oct. 21 plus 30 days) imply a lot more volatility than the 30 days prior and after.

Investors and the election

The topic for the July survey from the Spectrem Group was “Investors and the Election.” The mix of Republicans, Democrats and Independents was split relatively evenly. Here are the highlights:

I own investments tied to each of those bond indices, specifically securities with the symbols LQD, TIPS and VCSH, respectively. I like them better than cash right now, but I suspect that in the next year or two, I am going to be less attracted to investments like these. While I currently don’t expect a big move in yields in either direction this year (the prices of bonds move inversely to yields), I see a higher likelihood of increasing rates than decreasing over the next couple of years. However, suppose we get surprised with an earlier-than-expected COVID-19 vaccine? In that case, the risk for bonds is higher interest rates (and lower bond prices) sooner than later.

Many investors sold out of the market earlier this year and didn’t take my advice to get back into the stock market after. Suppose you’re still sitting in cash and looking toward the bond market as an alternative. In that case, I’d advise that you consider the risk and reward trade-off of long-term versus short-term bonds. If you are going to initiate new bond positions, reaching for yield by purchasing long-term bonds may make you unprotected from declining prices if there is progress in fighting COVID-19. I’d lean toward buying shorter-term bonds.

I know that extra safety in bond selection may seem contrary to my more aggressive posture on the equity market. However, remember, certain investments play specific roles. I use bonds in the portfolios of my conservative clients because their financial plans dictate that they don’t require to take on the additional volatility or risk of equity to satisfy their needs, wants and wishes.