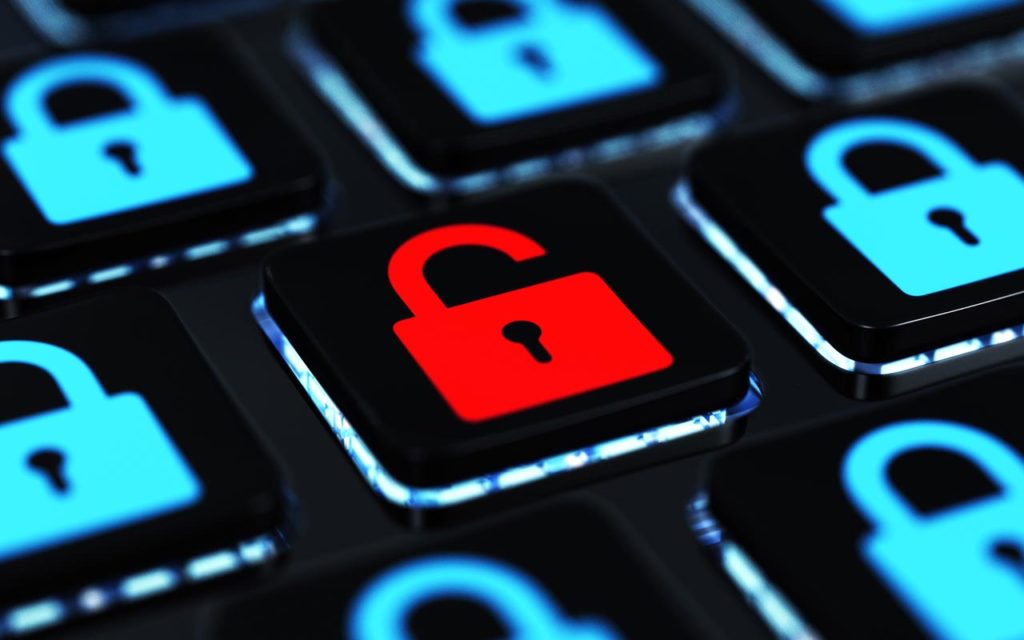 Dalton — Did that title get you to click? If so, I’ll have to keep it in mind in case I want to someday up my clickbait game. But this, my friend, ain’t clickbait. This is your favorite uncle, Allen, helping you put cold, hard cash in your pocket. Who’s good to you?

Over 140 million people, more than half of Americans, had their personal data compromised by the Equifax breach back in 2017. On July 22, Equifax agreed to settle state and federal investigations of the data breach by setting aside $700 million to pay for damages. I filed mine to get my piece of the $700 million and it only took about 80 seconds. You can file by entering your last name and the last six digits of your Social Security number here. It will also allow you to print and mail a form, if you prefer. If you’re not sure you trust Equifax anymore, here is the “file a claim” link through the Federal Trade Commission’s website.

You can claim relief for your time, for money lost or spent, or reimbursement for Equifax’s credit monitoring if you had a subscription. If you were affected, you can receive at least four years of credit-monitoring services through Experian (not that it was all that effective before). Or, if you already have credit monitoring, you can request a $125 cash payment. For time lost, you can claim up to 20 hours and receive $25 per hour. For monetary loss, you can claim up to $20,000 or out-of-pocket expenses incurred.

On Friday the advance gross domestic product number for the second quarter of 2019 was released. Real GDP growth came in at 2.1% (“real” meaning adjusting for inflation). That was above expectations, but still just a bit below the 2.3% average of the decade-long expansion. We also got to examine annual revisions to the U.S. national income and product accounts, and it looks as if the year-over-year growth in GDP peaked in the second quarter of 2019 at 3.2%. The economy has been slowing for a year, and as insurance, on the afternoon you read this column (Wednesday, July 31, 2019), it seems as if the Federal Reserve will cut interest rates 25 basis points (or 0.25 percentage points) from its current range of 2.25% and 2.5%.

If they do cut rates this afternoon, I’m growing convinced that the Fed will be one-and-done, and there will be an extended pause before we see any new action. This is going to be a big problem for the stock market as expectations are for a cumulative cut of 90 basis points (or 0.90 percentage points) over the course of the next year. I don’t see that happening. I could make an argument for 50, but not 90. The case for cuts includes the fact that, according to the Duke Fuqua CFO study, nearly half of U.S. CFOs believe that within one year we’ll be in a recession, and more than two-thirds feel a recession will have started by the end of 2020. You might think they are just worrywarts, but they are powerful worrywarts, and their concerns can create a self-fulfilling prophecy. We may already be seeing signs of that as CFOs cut inventory stockpiles last quarter to the tune of dragging down GDP growth by 0.9 percentage points. The trade war could continue to hurt growth as well, as it did last quarter by decreasing net exports to the tune of reducing last quarter’s GDP by 0.7%. If trade tensions continue, that’s certainly enough to justify 50 basis points of cuts over the next year. The trade war is important. The U.S. is part of a global economy, and what happens in the rest of the world affects our economy. The Fed is wise to consider not only the data reported here in the States, but also to consider the weakening trends of the rest of the globe.

Consumers, however, remain optimistic. And why wouldn’t they? Even if the economy were to fall off a cliff, they don’t see that cliff. The very definition of a recession means that we hit a peak, then declined. At the peak, it always feels fantastic, blissful. It never feels like it can go bad, because it feels so good. And it feels pretty good right now. GDP beat expectations, the labor market remains strong, final sales to domestic purchasers (a huge part of the economy) rose at a 3.5% annualized rate last quarter (better than the previous quarter, as well as the second half of last year). We see that. But we don’t see the cracks in the foundation until it’s too late and the house collapses. Consider me your building inspector. For now, stay in your house. Enjoy Netflix and air conditioning and non-buffering wifi and all those things we tend not to notice on a day-to-day basis, those things on the surface. As your building inspector, I’ll let you know when it’s time to revoke your certificate of occupancy for the stock market and tell you to relocate your investments.

At some point, those investments are going to have to move into a safer neighborhood. The stock market is going to go throw a temper tantrum if it doesn’t get what it wants. Either the economy continues to do well but the stock market deflates because it’s priced in a ton of rate cuts that it never gets, or the Fed does cut because the economy weakens and that saps corporate earnings and sends down stock prices. Either way, that’s bad news if you’re invested in equities. But, as I’ve been saying, the alarm is set, the neighborhood watch is on patrol, and I’m calling the stock market home for now. I’m not ready to move out of my equity positions just yet. Part of my comfort in staying invested, for now, is that I am a contrarian—I like to buy when others are selling and sell when others are buying. I’m bullish when others are bearish and vice versa. As you can see by the graphic below from the American Association of Individual Investors Investor Sentiment Survey, the number of bulls is less than its historical average, and the number of bears is more than its historical average, which is a sweet spot to be in if you’re holding stocks. 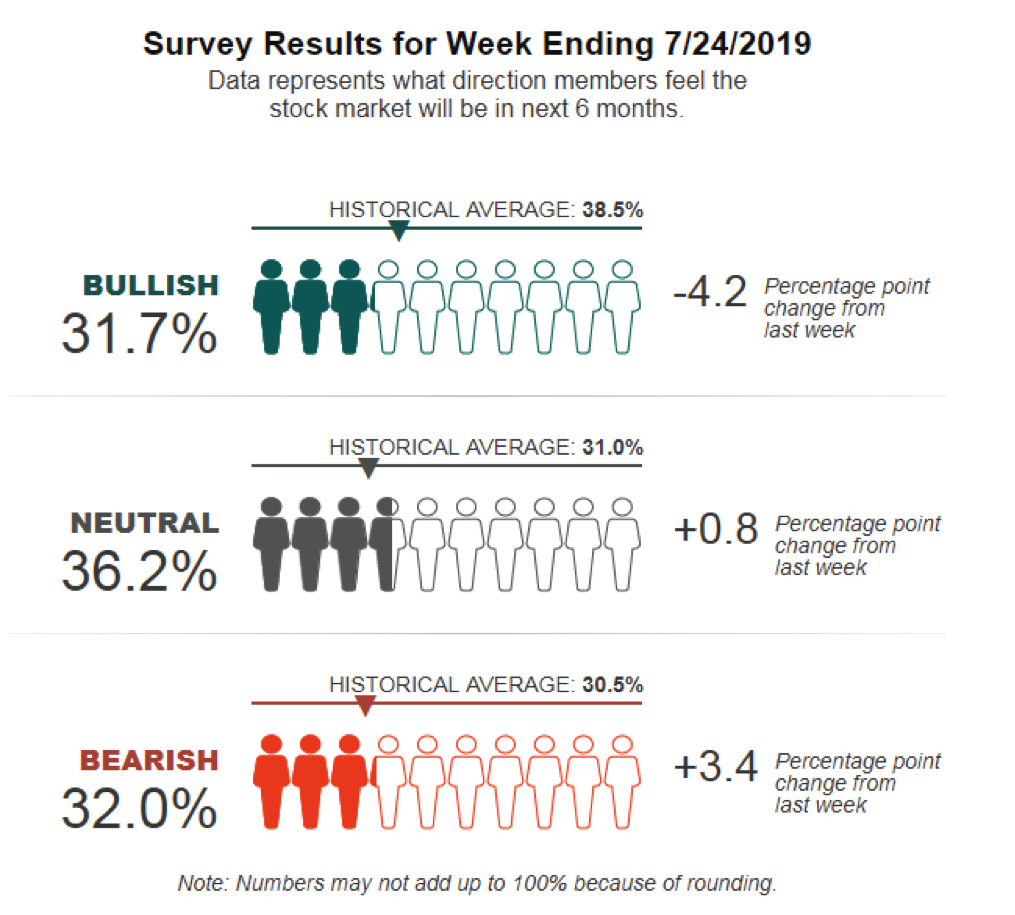 We are in the thick of what was supposed to be an atrocious earnings season. And, well, it didn’t disappoint. Or, wait—it did disappoint. Earnings sucked this quarter, let’s put it that way. But as I’ve said before, stock prices care less about “good” or “bad” and more about “better” or “worse.” As of the beginning of this week, about 600 companies have reported earnings so far this quarter and 68.7% of them have exceeded earnings per share estimates. That’s a healthy reading and suggests that we’ll finally see an increase in earnings beat rates. Part of the reason the stock market is only nominally higher than it was 18 months ago is because, prior to this quarter, the EPS beat rate fell for five straight quarters. The revenue beat rate this quarter is, so far, at 57.6%, roughly in line with last quarter. It’s enough for me to hold my equity investments for now. But I am no Pollyanna. I recognize the good in corporate earnings acceleration, but I also am aware of the negative. For instance, looking at just the companies that comprise the S&P 500 index, of those reporting by the beginning of this week, 77% have beat earnings expectations (ahead of the earnings-beat rate of 72% over the last five years), and 61% have beaten revenue expectations, according to FactSet. That puts this quarter on track to clock in a 2.6% decline in aggregate earnings, similar to the prior quarter. Bad is not necessarily bad, because it can be the point of a turnaround. But be aware that FactSet split the S&P 500 companies into two categories: companies with more than half of revenue from abroad, and those with a majority of sales occurring in the U.S. The U.S.-focused firms have so far reported an aggregate earnings increase of 3.2%, while the more global firms have seen an aggregate 13.6% decline. I am still not attracted to the foreign equity markets. If you’re in cash, wondering if you should get in, don’t jump in all at once. Dollar-cost-average judiciously, even slowly, then accelerate your purchases when we get a pullback.