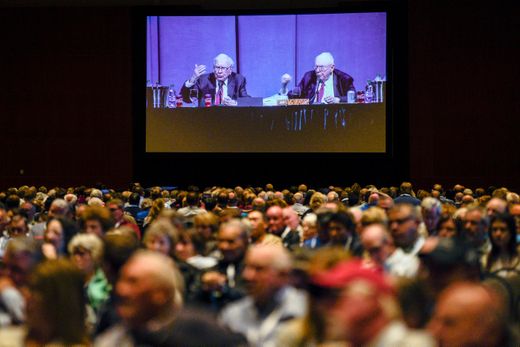 Dalton — Berkshire Hathaway, the multinational conglomerate headed by famed investor Warren Buffett, held its annual shareholder meeting this past weekend. It’s like Woodstock for investors of the Omaha, Nebraska-based company, drawing roughly 40,000 people to an arena—Buffett-stock, if you will. There were multiple hours of conversation, too much to detail for a short article, so I did you the favor of boiling much of it down to my version of CliffsNotes. Anything following in quotation marks is from the meeting or was said during a Monday morning follow-up interview with Becky Quick of CNBC.

Speaking of half-crazy, on Sunday I received an alert regarding a Tweet from President Trump, triggering more concerns about a trade war with China. Details were seemingly less important than the sentiment of talking tough (or maybe even half crazy) prior to this week’s scheduled meeting of Chinese negotiators, led by Vice Premier Liu He (aka “the closer”), visiting Washington, D.C. As of writing this article late Monday afternoon, a Chinese Foreign Ministry spokesman said that China’s trade team will still travel to Washington, with He, which is a potentially positive sign for a deal.

The gist of the tweets was that U.S. tariffs on $200 billion of Chinese goods would be raised from 10 percent to 25 percent enacted 12:01 a.m. Friday in retaliation to China retreating on some of the progress that had been made. However, as of Monday evening, Treasury Secretary Steven Mnuchin told reporters that the U.S. would reconsider the tariffs if the progress of the talks got back on track. 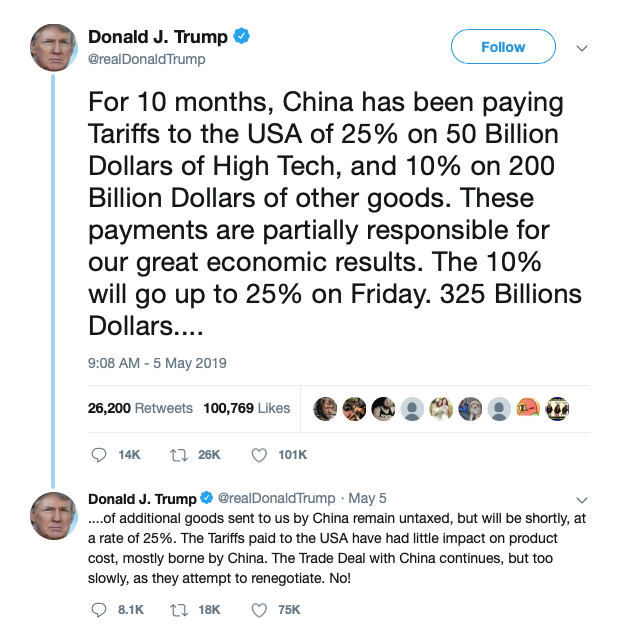 The fallout from the tweet was a 500-point drop in the Dow Jones futures and a five-percent drop in the Chinese stock market. The VIX, or “fear gauge,” spiked 45 percent at the start of the day before coming back to still-elevated levels. That was no surprise. The longer the market goes without a drop in price, the more shocking it is to investors when it does actually happen. Since 2017, when President Trump took office, there have been eight other gaps down at the opening of more than one percent on the S&P 500. Five of those eight were associated with China and trade (e.g. trade war concerns, the Chinese firm Huawei’s CFO getting arrested, the effect of tariffs on earnings). However, as I posted on LinkedIn that morning, according to data from Bespoke, since 2017, these big gaps down haven’t meant the end of the bull market. In fact, on average, the market had been up one week and then one month later.

I’ve been forthright in my expectations of a coming correction, so obviously it would come as no surprise if this were the catalyst to trigger it. I would, however, be surprised (like aliens-landing-in-my-backyard surprised) if it triggered the death of this bull market.