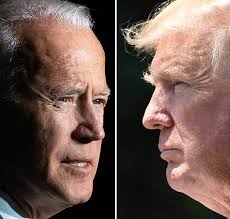 Dalton — At my firm, Berkshire Money Management, we get together to discuss all things that may, or may not, affect the capital markets. Whoever sits in the White House gets more credit (or blame) than they deserve for economic growth and stock market return, but there is certainly some connection.

Up until recently, my official position on who will win the November 2020 presidential election was that incumbent President Donald Trump would pull off a victory despite every single poll pointing to a win for former Vice President Joe Biden. I have changed my mind and now I believe Biden will win.

Listen, I don’t know nothing about no polling (and based on 2016’s elections, neither do the pollsters), so I’m not going to go real deep on my math, but I will make some observations. I may change my mind, but as of today, it’s clear to me that I’ve got to consider portfolio ramifications for a Biden presidency. In a future column, I’ll dive deeper in terms of what that means for the economy. Today, I’ll justify why I currently think Biden will win (spoiler alert: It’s not due to the polls, but I readily admit that the polls may be capturing some of my observations), and give a 30,000-foot view of what that means for your investment portfolio.

First, a caveat. Every four years, in an election year, I either get Republican clients who call me up to tell me they want to liquidate their portfolios because a Democrat won or might win, and Democratic clients call me for the same reason (because a Republican won or might win). The point is that people make emotional decisions about their money based on some political ideology that convinces them that the other side will ruin America. Some readers will be mad at me if I say something they don’t like about their candidate. I realize that I risk offending you, but it’s my job to help you protect and grow your money, not to agree with you.

During the last couple of months, I have shifted from thinking that Trump would yet again defy the polls and pull out a win to thinking it’s Biden’s game to lose. Months ago, despite the polls, everything seemed to be going Trump’s way: The economy was strong, the stock market was hitting new records and the Democrats handled the impeachment in a manner that only seemed to have boosted Trump’s approval ratings. However, COVID-19 has blocked Trump from a clear path to re-election.

The 2016 presidential contest was, in a way, a choice between two potential candidates — Trump and Hilary Clinton — with unproven presidential track records. In 2020, with Trump as the incumbent, the election will partly become a referendum on his handling of the economy and the pandemic. The higher the infection rate and the more uncertain the economic outlook, the less likely Trump will be able to pull off a victory on Nov. 3. Unless something drastic happens soon, Biden will be able to attack Trump on both counts.

Historically, U.S. presidents tend to lose reelection when a recession occurs within two years of Election Day. Granted, the sample size is small, and it may be different this time because partisanship is so heightened that it may not drive Republican voters away from Trump. According to Gallup’s latest survey, there was an 89-point difference between Republicans’ and Democrats’ approval of Trump, which is the largest spread Gallup has ever recorded.

Because of the record levels of partisanship, perhaps the recession may not matter as much as it normally would, but I’m confident that it’s going to be a headwind for Trump’s reelection efforts. The unemployment rate, now at 11.1%, is one of the most visible economic indicators. If you are one of those unfortunate people or know one, it makes you think that maybe things are getting worse and you become more likely to oust the incumbent as it seems the political status quo isn’t working. Throw in the fact that businesses in your town remain either partially or fully shuttered, even the most partisan voter may be disappointed in the direction of the economy.

Trump has been trying to improve the economy by urging states to reopen their businesses, but it’s a risky maneuver because doing so increases the possibility of higher infection rates, which creates its own set of reelection problems. Trump will have some benefit from house price appreciation, but I don’t suspect it will be enough to offset all of the negatives. His best bet will be to pass another major pandemic relief bill before Congress recesses in August, but he doesn’t have much time. Although I recently heard a rumor that they might work up to Aug. 7 to see if they can’t get something done. Thanks, guys. <end sarcasm>

Democrats are given credit for stock market returns being better under a Democratic White House, although it’s conjectured that this is only true because of the policies passed by previous Republican administrations. Whatever the reasons, the stock market historically has done better under a Democratic president. It’s hard to see that occurring under Biden because he wants to hike corporate taxes from 21% to 28%, which could dramatically lower the aggregate earnings per share of S&P 500 companies. The hike of 7 percentage points is a massive 33% jump. Theoretically, that should cut the S&P 500 index by one-third, from roughly 3,300 points down to 2,200 points, which would bring us back to the lows of March 23. However, loopholes and sophisticated accounting procedures allow for effective tax rates that are different than the stated rates, so I don’t suspect a Biden win immediately means another stock market crash. In some ways, there is an economic plus if Biden wins, as Trump won’t be able to start another trade war with China and Biden is more likely to pass a large, first-term fiscal relief package that includes payments to beleaguered cities and states. But higher tax rates will likely mean less demand for stock buying, and not just by individuals.

Trump’s Tax Cuts and Jobs Act of 2017 didn’t do as much for the economy as some theorized because instead of investing all that extra money into the growth of their companies, many companies used the increased cash flow from the reduced corporate rate to finance share repurchases. Share repurchases rocketed 46.5 percent (to $669.7 billion) from 2017 to 2019. By comparison, capital expenditures only increased by 18.8 percent (to $119.9 billion). It’s impossible to know what the magnitude of change would be, but Biden’s higher tax rates would likely reduce the volume of buybacks, which means lower stock prices.

Historically, the stock market performs best during the last four months of an election year (September – December) when an incumbent Republican wins (for example, if Trump wins) and does worse when an incumbent Republican loses (for example, if Biden wins). In either case, small-capitalization stocks tend to do relatively well for those months, though, this time, history may be less important than the spread of COVID-19 and the economic outlook.

The increased infection rates mean a lower probability of a V-shaped economic recovery and slower growth. In a lower-growth environment, I’d favor “growth” stocks over “value” stocks as investors pay a premium for companies that can deliver faster-earning growth in a slower economy. It’s possible that, under either Trump or Biden, investment allocations need not change much if at all. However, the immediate volatility could be higher under Biden. Longer-term, meaning over the next four years, a fiscal stimulus package by either candidate could trump (no pun intended) corporate tax rates. But all other things equal, Biden’s corporate tax rate plan will be a headwind on your investment portfolio’s rate of return. It may not mean less for your investment selection and allocation and mean more for your financial plan. You should meet with your financial planner to determine if potentially lower rates of return will impact your financial needs, wants and wishes. If so, adjust your plan accordingly.