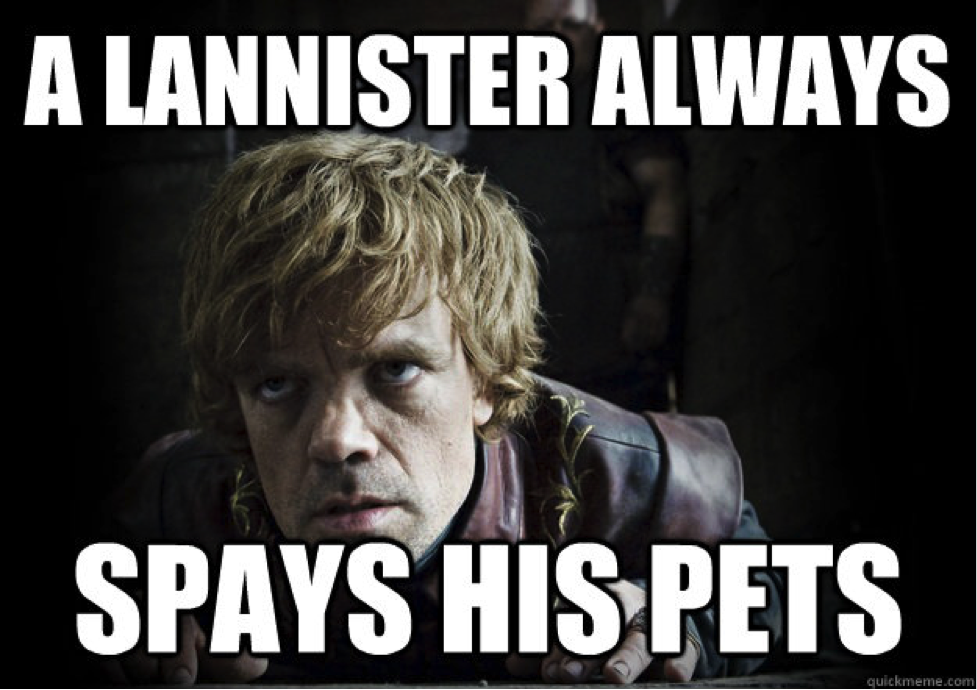 Dalton — First off, there are no spoilers ahead for the season finale of Game of Thrones. I wrote this before it was aired. There are minor spoilers for the first season, but you should be fine.

On Saturday evening (May 18),,I had the distinct pleasure of hosting a fundraiser at the Model Farm (a former Crane family mansion reimagined to become the Berkshire Money Management office space) for the Berkshire Humane Society. At any given time, there are usually two or three dogs roaming around the company. They hang out with us in our offices and go on hikes with us on our propery out back. We’re animal lovers here. I’ve personally fostered more than 100 dogs and cats on their transition to forever homes.

I’m an animal lover, and I’m also a Game of Thrones geek. During the BHS fundraiser, I pivoted the conversation from furry animals to dragons. It really wasn’t a hard pivot. It turns out that the world loves GoT. There were a lot of guesses as to whether or not someone might kill the Khaleesi, how much the ladies love Jon Snow, and how we all want to have a drink (and know things) with Tyrion. One minute these local industry titans were making the “goochy goochy goo” baby noises to animals, the next they were discussing how they would play the Game of Thrones in today’s environment. It’s fun to hear what happens when you mix margaritas, money and mad kings. Here are just a few of the lessons we learned from GoT.

1. Have a plan. What’s the most uttered phrase in GoT?

“Winter Is Coming.”  – the motto of House Stark.

These were mostly business owners in this silly little geeks-meet-bravado circle, but “Winter” doesn’t have to be the next recession or the threat of a big competitor. It can be an unexpected expense (like having to bribe a college advisor to get your kid into an Ivy League school) or retirement (a stream of income has ended and, according to a study by Fidelity Investments, the average sum of medical costs in retirement is $280,000—and that’s after insurance). From the business owner’s perspective, the biggest sin was taking the company’s profits and reinvesting back into the business without having a cash cushion to prepare for the unexpected and unfortunate. Reinvesting is a good idea, but it’s a better idea to have liquidity. The same goes for households: Spending your money is a good idea (if you like food and shelter and such), but not all of it. You need to have a cash cushion to buy those dire wolf wool socks when Winter actually comes.

2. DTA. If you’re watching prison movies when you’re not watching GoT, then you’ve heard the phrase “don’t trust anybody.”

“Don’t fight in the North or the South. Fight every battle everywhere, always, in your mind. Everyone is your enemy; everyone is your friend. Every possible series of events is happening all at once. Live that way and nothing will surprise you. Everything that happens will be something you’ve seen before.” Lord Baelish, aka Littlefinger

We can think of a dozen other ways to apply this in the business world. In our regular lives, it’s as simple as anticipating bad traffic on the way to that important client meeting; or as irritating as paying someone $2,500 to fix your car and they have it for three months and lie to you about parts being back-ordered (true story) so you need to be prepared to pay for a rental car beyond what insurance provides; or if you have a high school friend build your fence on a no-bid handshake deal and you find out later that you were overcharged by about $5,000 (another true story).

You can consider every possible series of events, or you can be like Eddard Stark and ignore the devious nature of some people and get your head chopped off for your efforts.

3. Work hard and network. To get ahead in life, be industrious and be likeable. Likability goes a lot further than people like to admit; it helps you build your influence over time. And hard work will help you get through those tough moments we all hit, those “if it’s not one thing it’s another” moments.

In one scene, Tyrion tells Varys that he’ll have Varys thrown into the sea if he threatens him again. Varys replies,

“You might be disappointed in the results. Storms come and go, the big fish eat the little fish, and I keep on paddling.” – Lord Varys

Varys demonstrates here that he knows his current status in the world, but he also is confident in himself because of what he has accomplished, and how he did so. Varys became a highly regarded spy and consult to kings and queens despite being a child beggar. He was industrious and learned a skill, and he also learned how to humbly explain the value of that skill in a likeable way. Another way to say that is that he developed the soft skill of consultative sales.

4. Be kind. A quick, fun story I heard at the fundraiser: The college-age daughter of a friend of mine was hired to direct traffic at Tanglewood. After the show, an irate woman couldn’t pull out of the Oak Lot fast enough so she stepped out of the car and yelled at the poor girl who was just trying to do her job, “I paid $10,000 to get this parking pass; you better stop traffic and let me out!” The guy behind her also got out of his car and yelled, “I donated $50,000 this year so stop yelling at the girl, get in your car and wait like the rest of us.”

As a business owner, you want to give your employees options and treat them like allies, not slaves. People find value and self-worth when trusted with roles and responsibilities; be their partner, not their master.

Outside of employment, it’s about communication. As momma used to say, you’ll catch more flies with honey than you will with vinegar. That happened for the Khaleesi when she freed the Unsullied. She gained an entire army by being kind. But a grander, kinder move was when she moved on the city of Yunkai. Her trusted advisor, Jorah, advised her that taking the city would have no tactical advantage in bringing her closer to her goal of assuming the Iron Thone at Westeros. Daenerys asked Jorah how many slaves there were in the city, to which he replied, “at least 200,000.”

“We have 200,000 reasons to take the city”- Khaleesi Daenerys Targaryen

There is no need to act elitist, ever. People who reach a certain economic status sometimes ascribe that they got there due to some sort of divine intervention and thus must be the chosen one. They think they’re better or smarter than everyone else. But we don’t need an education to know what class we’re in, do we?

A couple of weeks ago, I said that it was time for a stock market correction but that you should just “suck it up” and deal with it. The S&P 500 dipped about 4.5 percent. Was that it? Are we done? In a world where we’re not a tweet away from needing to change investment direction, I’d say yes, we’re done. On Monday, May 13, there was a 90 percent Down Day (a day when 90 percent of both volume and price action were down, showing capitulation by weaker investors). Then the next day, there was an 80 percent Up Day (showing renewed demand due to lower prices). It’s not exactly a textbook example of the formation of a market bottom, but it’s close enough to suggest a high probability that a low was made. However, we did take advantage of the rally to reposition mostly our tax-deferred accounts by reducing exposure to the Industrials Sector and using options, calls and puts to buy some short-term portfolio insurance. We’ve always called that portfolio insurance, but for the next few months, I might call it tweet-insurance.