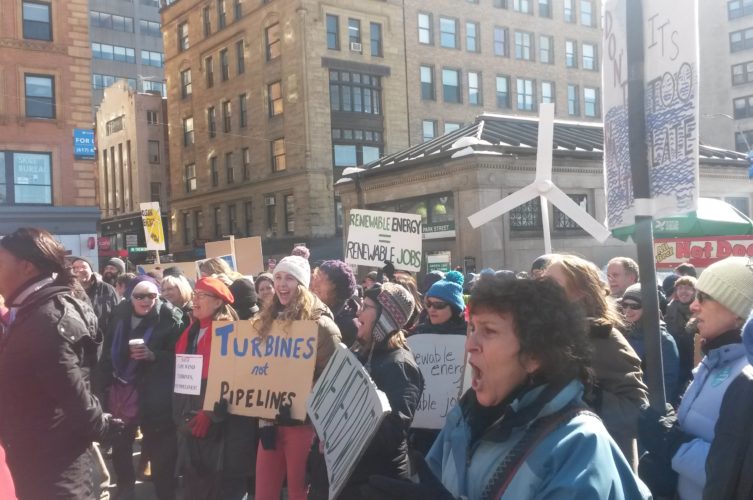 BOSTON — Hundreds turned out on the Boston Commons on the last day of February to rally support for Cape Wind and call on utility companies to reinstate their contracts to purchase clean power and jumpstart the offshore wind industry in the U.S.

Cape Wind, a project consisting of 130 turbines producing 468 megawatts of clean, renewable power in Nantucket Sound, was first proposed in 2001. After facing over a decade of opposition, including lawsuits by oil billionaire Bill Koch, what was positioned to become the nation’s first offshore wind farm is now on life support and may ultimately be nixed.

The final straw came in January 2015 when National Grid and Eversource Energy, formerly Northeast Utilities, backed out of their agreements to purchase 50 percent of the Cape Wind power. The utilities’ decision was due to the wind developer’s failure to meet financing deadlines, a failure that is largely attributed to the Koch-backed lawsuits blocking the project.

According to Craig Altemose of Better Future Project, Bill Koch, who owns three multimillion dollar gated compounds on the Cape, filed close to 30 lawsuits to block development of the wind farm offshore from his property. This endless onslaught of litigation deterred potential investors and ultimately led to the utilities dropping their contracts with Cape Wind due to the project’s lack of secure financing.

Had it not been for these lawsuits, Cape Wind would be under construction this year.

“You people here today are what has inspired us to fight through over 26 lawsuits. This project would be up and running on Horseshoe Shoal if it wasn’t for those lawsuits,” Cape Wind President and CEO Jim Gordon told the crowd of supporters gathered on the Boston Common.

He said the utilities failed to tell him that they would be terminating their contracts with Cape Wind. Instead, his Communications Director found out through contact by a reporter at the Boston Globe. “We were never notified,” Gordon said.

The utilities’ sudden decision spurred a robust campaign by environmental activists and clean energy advocates to rally public support for Cape Wind. Led by Better Future Project in partnership with ten other organizations, activists delivered a petition with more than 95,000 signatures to National Grid urging them to reinstate their contract with Cape Wind.

“We’re focusing on National Grid and calling on them to save Cape Wind, because that would be enough to revive the project at this point,” said Emily Kirkland, Communications Coordinator at Better Future Project. By appealing to Marcy Reed, President of National Grid in Massachusetts and a supporter of offshore wind, Better Future Project and its allies hope the utility will reconsider its decision.

“Marcy Reed has been a longtime public supporter of offshore wind, and so we feel optimistic that if she sees the depth of public support for Cape Wind, she’ll be willing to step up and do the right thing,” said Kirkland.

As a demonstration of this public support, Better Future Project convened a rally on Boston Common featuring songs, chanting, a theatrical performance, and concluding with a symbolic planting of 130 colorful pinwheels in the snow to symbolize the turbines that would be built in Nantucket Sound.

Speakers at the rally emphasized the urgent transition to renewable energy that Cape Wind represents and the importance of making this transition to protect the future of today’s youth and future generations.

“I want to be able to have children and not feel guilty about bringing them into a ruined world, but that will only be possible if we remove our dependency from industries that spew CO2 into the air at reckless rates,” said Liza Sockwell, a junior at Newton South High School and an ACE New England Action Fellow. “In my lifetime, I want to see the shift from fossil fuels to renewable energy, and the building of Cape Wind would be the start.”

Carolyn Barthel of 350MA Central Mass Node spoke as a mother of two 24-year-old millennials: “My children will live the vast majority of their lives in this century, and right now it’s not looking pretty!” she exclaimed. “We need a huge, World War II-like mobilization of green technology, policy decisions, and restructuring of our economy if we’re to have hope for a reasonable future. That’s all I want for my kids, a reasonable future.”

Anne Goodwin of the group Mothers Out Front echoed this concern. “I’m here today because I cannot look my daughter in the eye if I have not tried to protect her future while our leaders on every level fail to act on climate change,” she said. “We must not let [our leaders] act for the short-term gain of a few. We must make them make the right choices for our children, our grandchildren, and generations to come.”

Sabine von Mering, a member of 350MA Metrowest Node and a German professor at Brandeis University, compared Europe’s ambitious effort to build up the offshore wind industry to the lackluster effort by the U.S. to do so.

According to Kirkland, potential offshore wind developers are wary about starting other wind projects given the obstacles Cape Wind is facing. “We felt it’s important to launch this effort to save Cape Wind, even if it is a ‘Hail Mary,’ because the fate of Cape Wind will have enormous consequences for the fate of offshore wind more generally,” she said.

“When we heard the news that the utilities would be terminating their contracts, the odds for Cape Wind looked pretty grim, and we knew we were going to facing a pretty uphill battle. But for those of you who have been involved in the Keystone XL fight, I know you’re no strangers to uphill battles,” he told the crowd gathered on the Common.

Altemose referenced President Obama’s recent veto of a Keystone XL bill as a testament of the power of grassroots activism. “That was because of people like you coming out on days like today to places like this. That’s how we’re going to get Cape Wind built, with that same dogged persistence.”

Gordon said he will keep on fighting.

“The vast majority of citizens in Massachusetts want this project built,” he said. “We are not giving up! We have just begun to fight. We are going to go back, we are going to talk to the utilities and try to amicably resolve this issue.”

National Grid has not indicated whether it will reconsider its decision to back out of Cape Wind. But according to Jake Navarro, Massachusetts spokesman for National Grid, the utility is committed to pursuing other renewable energy projects.

“While Cape Wind did not fulfill the terms of the power purchase contract, National Grid is still committed to promoting renewable resources within the region,” he said in an email statement. “We still believe the solution to New England’s energy challenge is a diversity of energy sources, which is why we support many renewable projects, including 334 megawatts of on-shore wind in Maine, the Deepwater Wind project in Rhode Island and the installation of an additional 16 megawatts of solar power we will own and operate in Massachusetts by the middle of this year. In the last five years, we have also processed more than 15,000 applications to connect customer-owned electricity generation to our grid.  We will continue to pursue other renewable options, such as the recently announced solicitation for additional renewables, consistent with our goal of reducing emissions while minimizing the cost impact on our customers.”