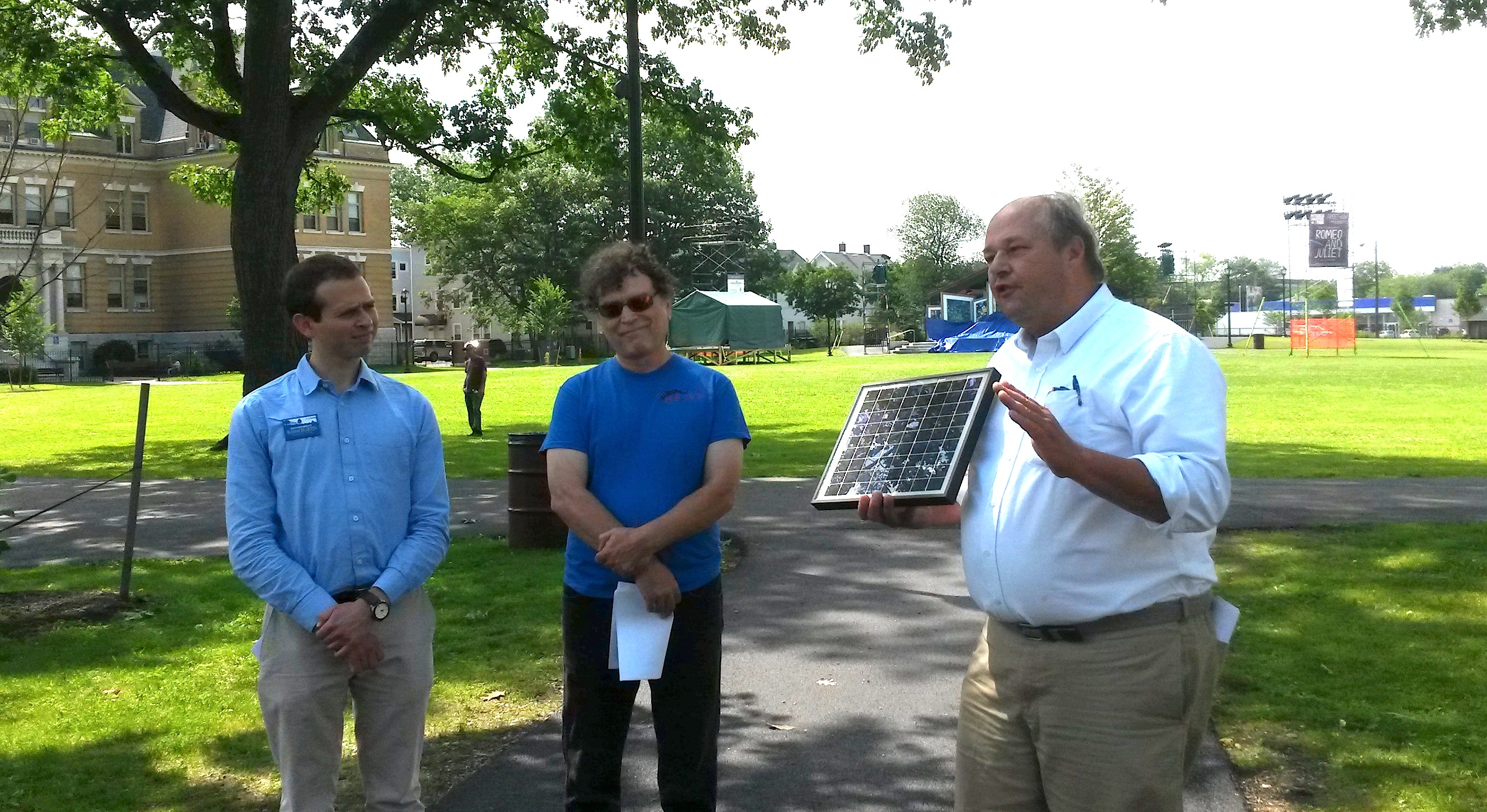 “There’s a cap on the total amount of solar power eligible for net metering, and in March the cap was hit for towns served by National Grid, including many towns in the Berkshires. As a result, planned solar installations in dozens of communities across the state are not able to move forward,” Ben Hellerstein, state director for Environment Massachusetts, said Monday (July 20) during a press conference in downtown Pittsfield. The event was the first stop on a 10-city, statewide “Soak Up the Sun” press tour organized by Environment Massachusetts.

“It’s the middle of the summer and we should be doing everything we can to soak up the rays of the sun,” said Hellerstein. “Instead, arbitrary caps on solar power are keeping us in the dark. Our state leaders should help communities here in the Berkshires and across Massachusetts take advantage of all of the environmental and economic benefits that solar brings.”

Net metering refers to an incentive that credits solar producers for the excess electricity they provide to the grid. For solar systems sized over 25 kilowatts, net metering caps limit the amount of solar photo voltaic energy (PV) eligible for this credit. The state-mandated caps equate to a percentage of the utility companies’ historical peak demand, currently set at about 6 percent. Total solar capacity allowed under the caps is currently 800 megawatts (MW).

Legislation has been filed in the Massachusetts House of Representatives (H.2852) and the Senate (S.1770) to raise the caps to allow for up to 1600 MW of solar, a production target set by former Gov. Deval Patrick. The bills also set a new target to produce 20 percent of the state’s electricity from solar by 2025.

The new Baker Administration, however, has opposed immediate action to raise net metering caps. This has left impending solar projects across the state at a standstill. A proposed community solar project in Williamstown that is estimated to save the town $2 million over 20 years is at risk of being stalled due to the net metering caps.

According to one town official in Adams, a recently completed solar project has delivered tax revenue, needed jobs and clean energy to the community. But failing to raise the net metering caps puts further realization of these benefits from solar development on hold.

“We would like to continue developing more solar projects in town of all scales to foster economic growth while promoting sustainability,” Adams Town Administrator Tony Mazzucco said in a written statement. “Not adjusting the net metering cap effectively ties our hands and denies us a crucial avenue for economic and job growth, tax base growth to provide critical municipal services like schools and public safety, and essentially stops dead our best avenue for a truly sustainable community and region.”

The clean energy industry is one of the fastest growing sectors of the Massachusetts state economy, employing more than 88,000 people at the end of 2014 with an expected addition of 11,700 jobs this year, according to the Massachusetts Clean Energy Center. As Bruce Winn of Berkshire Environmental Action Team pointed out, the number of statewide jobs in clean energy is comparable to that of the insurance industry.

“Clean energy jobs account for 2.5 percent of the Massachusetts state product, and these numbers are growing fast,” he said. “Current net metering caps are an obstacle to this progress.”

Besides the more than 12,000 jobs supported directly by the solar industry statewide, solar indirectly supports jobs outside the industry such as architects, engineers, software developers and telecommunication specialists.

“There’s no reason we should be putting caps on clean energy,” added Hellerstein. “We have to move as quickly as possible towards the future where we get 100 percent of our energy from clean and renewable sources. Solar is going to be a big part of that.”