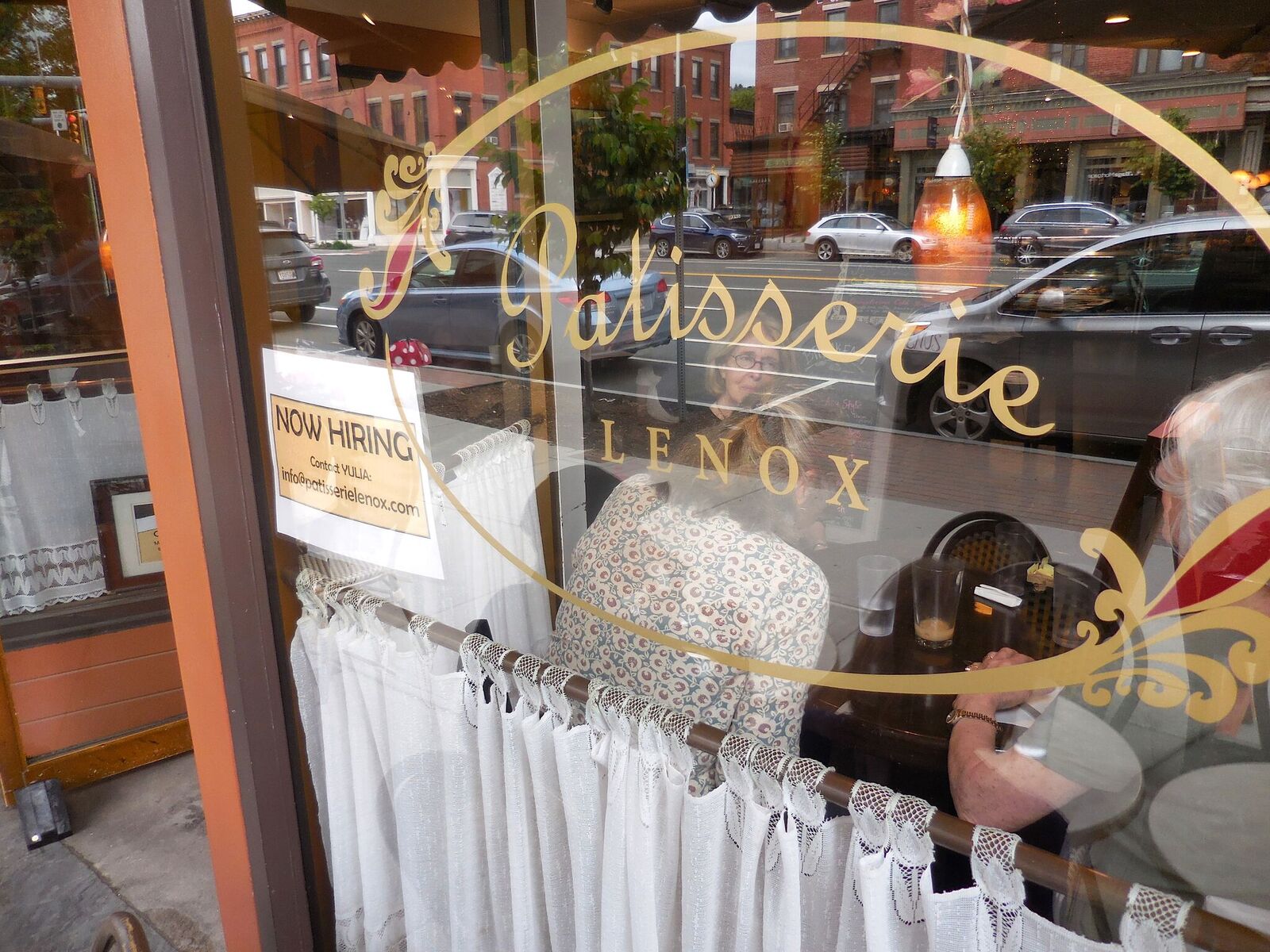 Diners and coffee sippers enjoy themselves at Patisserie Lenox in Great Barrington while a 'help wanted' sign hangs in the window, a common sight in the downtown area this season. Photo: Terry Cowgill

Great Barrington — It’s not easy finding help in South County, especially heading into summer, the peak period for tourists and part-time homeowners. Take a look at the many “help wanted” signs on store windows or ask just about any merchant in downtown Great Barrington and you will get an earful.

And the problem for retailers has been exacerbated by a challenging labor market. In the month of April, the federal unemployment rate shrunk to 3.9 percent, the lowest such rate in 18 years.

Jean Yves Bougouin and his wife, Sonya, own Patisserie Lenox, a French-style cafe with locations in Great Barrington, Lenox and Hudson, New York. A few months ago, they opened a new patisserie in Northampton.

Asked in a brief interview in his Great Barrington cafe whether he had trouble finding help, Jean Yves Bougouin let out a belly laugh: “Very funny,” he guffawed. Then he turned more serious.

“It’s just a nightmare finding people that will commit,” Bougouin said. “And it’s not just the Berkshires. At all our locations, it’s the same thing.”

Bougouin said a number of factors are working against him and other retailers. Fewer high schoolers and college students are out there and fewer still are looking for work. Those who are interested are not inclined to be available whenever they don’t feel like working.

“We do get school kids [during the summer], but they have to go on vacation,” Bougouin explained. “Or they say, ‘I can’t come to work today because of this or because of that.’ So it becomes an impossible situation.”

When Bougouin was growing up in Europe, he pretty much had a set schedule for his summer vacation, which allowed him to apply himself to whatever job he was working. Sonya makes out the weekly work schedule for their 40 employees, but it’s very much a work in progress.

“Nowadays young people are so scattered,” Bougouin said, referring to the multiple directions they are being pulled by family and preparation for college or the professional workplace.

Bougouin said he advertises in newspapers and online. Word of mouth can also be effective. And like several downtown merchants, he has a sign in his window announcing his need for help. And it’s not as if the front-end and server staff are paid poorly. With tips, most staff earn about $20 per hour. As for the baking for the four cafes, Bougouin does almost all of that himself because finding another skilled baker is almost impossible.

Across Main Street from Patisserie Lenox is Robin’s Candy, a popular destination for young and old alike. Owner Robin Helfand has gotten creative in trying to attract help. She has a sign posted on a glass door announcing “great summer job” opportunities for “college students.” But unlike other such signs seen in town, this one offers a $100 Robin’s gift card for each successful referral.

“Our staffing shortage is particularly dire in terms of hiring summer staff able to work the full season though Labor Day and willing to work evenings/weekends in exchange for a generous salary/bonus well above minimum wage,” Helfand told the Edge.

Helfand is supplementing her usual ad campaigns with social media posts and online listings in ZipRecruiter and Indeed, as well as on her website, where she lists three immediate openings. Helfand has enlisted the help of her adult children when they are available. She recently interviewed two local students who saw her plea for help on the Great Barrington Community Board Facebook page.

She is also starting the process of recruiting overseas workers by applying for the necessary visa allotments. Helfand expects this could take over a year, “but may ultimately be the only means to staff for our peak periods.” At any rate, Helfand says the scarcity of summer help has gotten progressively worse in her 10 or so years on Main Street.

“We try to laugh about this, but the absence of reliable, dedicated staff is a critical factor limiting our ability to expand,” Helfand explained. “Co-opting my grown children to help during peak weekends is not a sustainable solution.”

And of course, in a higher-end retail environment, customers expect knowledgeable sales staffers who understand the product and can appreciate the needs of the clientele.

“Importantly, we, like most businesses, need more than just ‘bodies’ to provide the excellent customer service our guests expect and deserve,” Helfand explained. “We need staff able to meet certain standards.”

Matthew Rubiner agrees. He owns Rubiner’s Cheesemongers and Rubi’s Cafe on Main Street. It’s been harder each of the 14 years he has owned the business to keep it fully staffed. And the specialty aspect of his business, especially in the grocery store, has added to the challenge.

“To be a good barista takes months of training,” Rubiner said. “And then in the store, which might even be more difficult to staff, there’s just this world of information that you need to know: about the cheese, about the specific skills of this trade, using the meat slicer and knowing the grocery products.”

One problem Rubiner faces is that, in the years since he has owned the business, kids and young adults have to return to school earlier and earlier. High schools in Massachusetts generally start up the week before Labor Day and colleges typically a week earlier than that.

“It’s gotten really difficult because there’s just a disconnect between the fact that the three busiest weeks of our season are the last two weeks of August and the first week of September,” he continued. “That’s by far our busiest stretch. That’s the stretch we look to to make much of our money for the year.”

Rubiner is also convinced part of the labor pool problem is attributable to the fact that Berkshire County is a place where “some people aren’t here for very long. You have some transients, and of course young people looking for that next step.”

Looking back, Rubiner added, “If you asked me ‘what do you wish you knew more about when you opened the store,’ it would be labor and refrigeration maintenance.” That prompted a laugh from both Rubiner and his interviewer.

Two other businesses surveyed by the Edge have had a comparatively easier time staffing the premises. Fuel, the popular coffee shop and restaurant on Main Street, is one such place.

Eugene “Will” Curletti owns the shop with his wife, Robin. He said Fuel has a lot of college kids who often return for multiple summers. He attributed that good fortune to “the nature of our shop. It’s a fun working environment.”

Indeed, Fuel is known for its aromatic coffee-infused environment, its good food and its hipster vibe. For obvious reasons, young people of working age seem to gravitate to Fuel.

“Right now I’m fully staffed,” Curletti said. “I’m still looking for people for the kitchen, but I think that’s year-round and every kitchen in town has that issue. I’m not really sure what it is, but it’s easier for me to staff the floor and the coffee bar. The kitchen has always been the question mark.”

South of town on Route 7, Guido’s Fresh Marketplace, the upscale grocer, is also advertising for help. The store’s efforts include a lawn sign on the grassy median next to the street.

Guido’s, which also has store farther up Route 7 in Pittsfield, is having an average year in terms of filling available employment slots according to Alicia Aldam, who manages human resources for the Masiero family, which owns the company. But it’s a little more difficult in South County because the labor pool is smaller.

“That’s why I start in March for our summer hire needs. Fortunately, we have developed great long term relationships with students who work the summer and then are able to work during the holidays when home from college,” Aldam said in an email. “Often, they refer their friends/family so we have a steady stream of choices. It is a win-win.”

There are a variety of theories as to why the seasonal labor market has been tightening over the years. Birth rates all over the northeastern U.S. have been dropping for at least a generation, so there are fewer young people out there looking for work in the first place.

As both Rubiner and Bougouin have pointed out, a shorter summer vacation means fewer students are available and, for those who are willing to work, their available weeks have been reduced along with their vacations.

In addition, more students are willing to forgo a paycheck in the summer while taking a volunteer community-service position or an unpaid internship to put on college applications or to build their resumes for life after college. And many now have overbooked extracurricular activity schedules, contributing to what Bougouin called the “scattered” nature of their lives.

The seasonal employment situation has deteriorated to the point that some business owners on Cape Cod are traveling to Puerto Rico to look for workers. The shortage of foreign workers is due in part to the fact that H-2B visas are much harder to come by. After Hurricane Maria hit Puerto Rico last fall, the unemployment rate hit 10 percent. And as American citizens, Puerto Ricans do not need work visas.

Heather P. Boulger is executive director of the Berkshire County Regional Employment Board, which provides leadership for workforce development in the county. She said about 12 Puerto Ricans have been recruited for employment opportunities this season in the Berkshires.

Boulger pointed to data recently released on Berkshire County employment in April, the latest month for which statistics were available. Click here to see them.

“We’ve always struggled, but this year is more dynamic than in years past,” Boulger said.

She said there are 2,900 people collecting unemployment benefits in Berkshire County, but the actual number of unemployed might be closer to 5,000 because some people have given up looking for work or are otherwise out of the labor market.

Employers have reached out to veterans’ groups and the estimated 10,000 to 12,000 immigrants in the county, but it’s still hard to find qualified workers.

“Employers are frustrated by posting jobs and not finding people with skills they’re looking for,” Boulger explained. “Thousands of job opportunities in Berkshire County are going unfilled.”

Boulger said her group has been working with Berkshire Community College on meeting that need through increased training opportunities, including in so-called advanced manufacturing, which requires a higher level of skill—but also offers higher pay—than traditional manufacturing.

“We wish we had a magic wand,” Boulger said. “Anyone who wants a job should be able to find one.”

Jonathan Butler is president and CEO of 1Berkshire, the umbrella organization created in 2010 to coordinate the region’s economic and cultural agencies. He told the Edge the employment situation in the Berkshires has been “turned on its head.”

“There has been a shift in the economy here over last five to seven years,” Butler explained. “The reality is we have a workforce issue.”

Advanced manufacturing, health care and hospitality are the industries seeing the greatest need for workers. He applauded the work being done by BCC and the Massachusetts College of the Liberal Arts “to address the training gaps.”

BCC, for example, now offers an associate degree in manufacturing technology, while MCLA has an extensive health sciences program.

“There’s also been major investments by the culturals, new hotels or expansion of existing hotels, and a huge growth in the food industry in the Berkshires,” Butler said. “Most of these are in the visitor economy. It’s an opportunity to get ourselves better.”