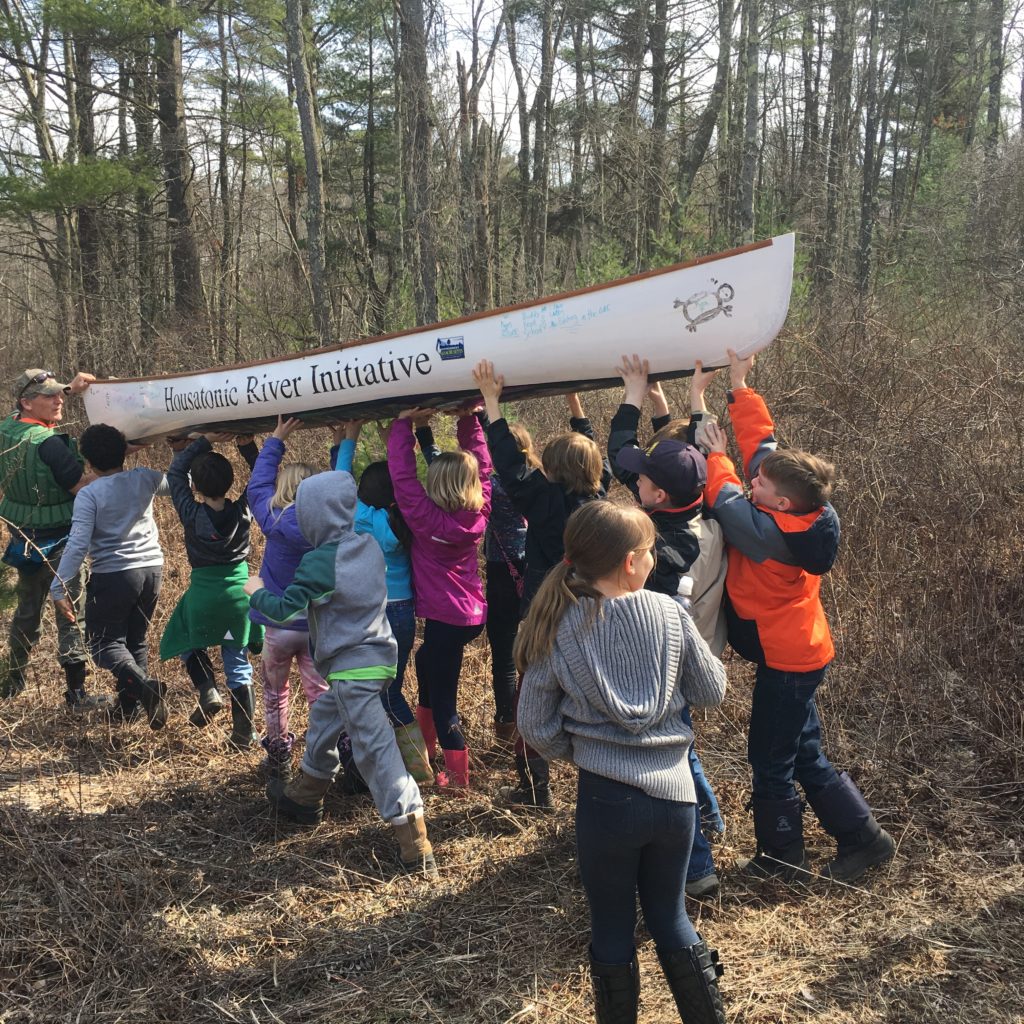 David Scribner
Muddy Brook Elementary School third graders help Denny Alsop portage his canoe to the Muddy Brook, as he continues his Canoe for Clean Water expedition for removing contamination from the Housatonic River and other state waterways.

Canoe for Clean Water: Lessons at Muddy Brook — the school and stream

Great Barrington – The 17 students in Shannon Guerrero’s third grade class at Muddy Brook Elementary School probably didn’t quite know what they were going to get into when they came to the main office Thursday morning (March 24) to meet Denny Alsop and learn about his Canoe for Clean Water expedition. He not only wanted to tell them about his trip by canoe to Boston, to urge the governor and the Legislature to have the Housatonic River purged of carcinogenic PCBs and all state waterways cleaned up, but he also would engage them in launching his canoe into Muddy Brook.

A Stockbridge resident, Alsop had just hauled his canoe up to the elementary school from the Housatonic River at Taft Farms that morning, a little detour from his route up the Housatonic to Pittsfield, the first leg of his 30 day trek that started Monday (March 21) at Bartholomew’s Cobble in Sheffield. His white canoe, emblazoned with Housatonic River Initiative in blue letters on the sides, was stationed on its carriage in front of the school. 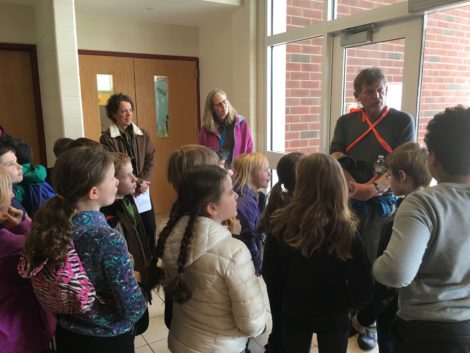 Before showing them the canoe, he talked with the students in the hallway, creating an impromptu class on environmental responsibility, a discussion that was joined by Shannon Guerrero, Muddy Brook Principal Mary Berle, physical education instructor Tina Soule, and Alsop’s wife, Nina Ryan.

“Denny Alsop is a man of conviction and an activist,” Berle said to the students, and she recalled how she, too, had been an activist for clean water and a clean environment, as well, riding 6,000 miles in 1989 on a tandem bicycle on a route that connected endangered rivers across the country.

Alsop explained why clean water was essential, why the river needed to be cleansed of harmful contaminants, and why he felt the necessity of repeating the canoe trip he had made 28 years ago.

“I feel strongly that we need to have clean water in our rivers,” he told the class, “I’m worried about the Housatonic. You can’t swim in it, or eat fish from it, or drink the water. This is not good for us.” 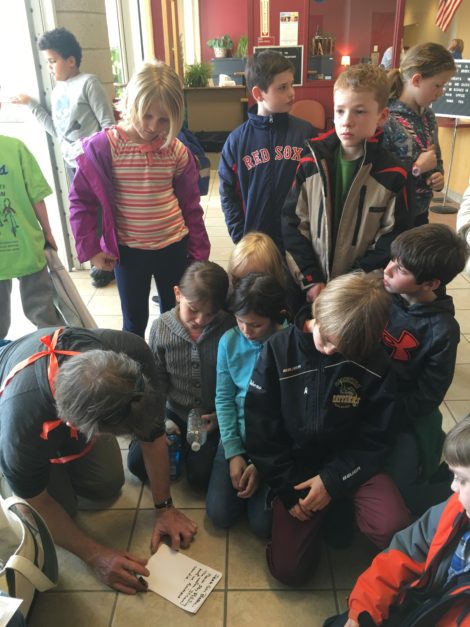 Alsop writes down the letter that Muddy Brook students have composed and that he will deliver to Gov. Charlie Baker. Photo: David Scribner

He took questions from the class, and then he asked the 7- and 8-year-olds to compose a letter to Gov. Charlie Baker, asking the governor to make sure the Housatonic got cleaned up. Alsop said he would put their message into a bottle to deliver to Gov. Baker.

It was time to show the students the canoe, and get down to the Muddy Brook. It was the same canoe, he said, that he had used on his previous trip, and he had made it himself from a white pine that had grown in Tyringham. Before setting off for the stream, he had students autograph the canoe. 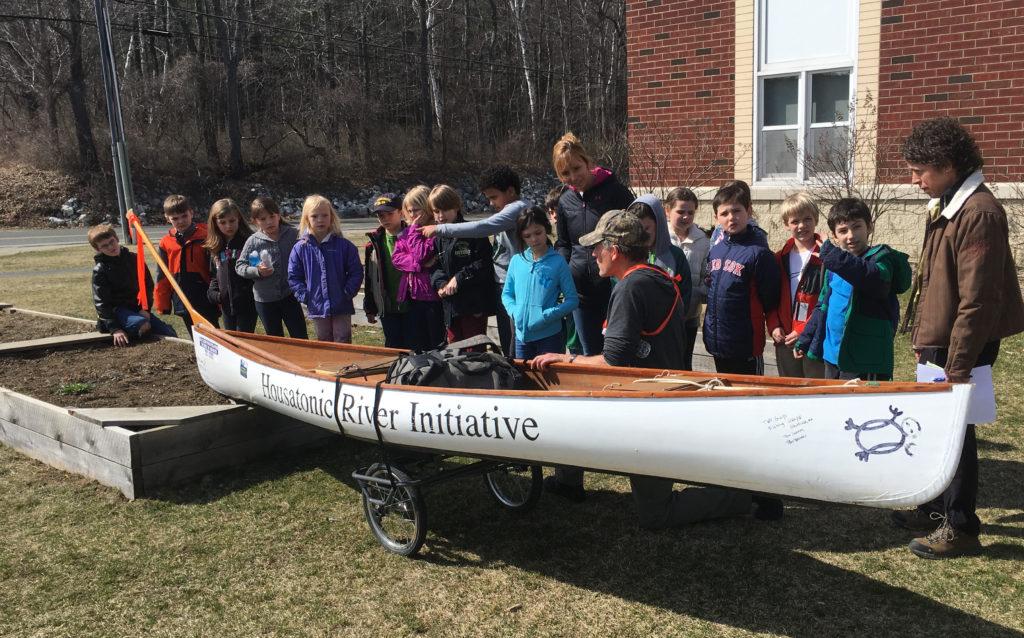 Alsop explains how he made the canoe, and how he sleeps in it at night, beneath an inflatable tent. Shannon Guerrero and Nina Soule listen to the presentation. Photo: David Scribner 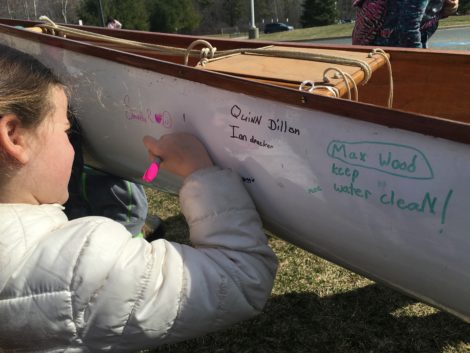 Each of the 17 students signed the canoe. Photo: David Scribner 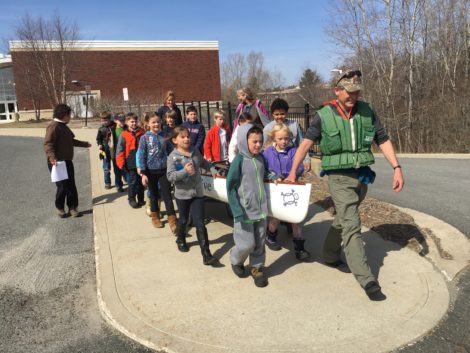 Reaching Muddy Brook – the brook itself – however, was no easy matter, considering that it wasn’t a richly flowing stream but a marsh. Alsop had scouted the route that he would take, from the shallow stream back to the Housatonic River, but to get there the canoe had to be carried through a swamp on the far side the school’s soccer fields. 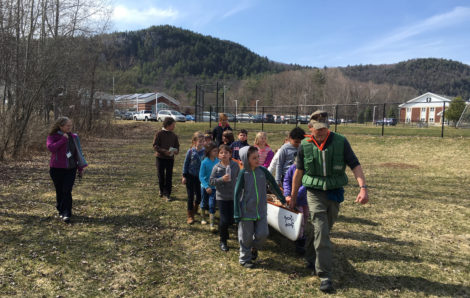 Alsop and his student crew guide his canoe down the path to Muddy Brook, with Monument Mountain in the background. At left, Mary Berle accompanies the crew, with Nina Soule and Shannon Guerrero following. Photo: David Scribner

With Alsop leading, the students rolled the canoe along the parking lot to a path that led to the brook. And down the path the crew went, Alsop guiding the canoe carriage with Monument Mountain in the background. When they got as far as the tree line, Alsop detached the wheeled carriage, folding it up for future portage, and he and the students hoisted the canoe high and marched triumphantly through the woods until the ground grew swampy. (Students had been advised to bring boots for this exercise; this reporter had not, and promptly got his shoes and pants soaked up to the knees.) 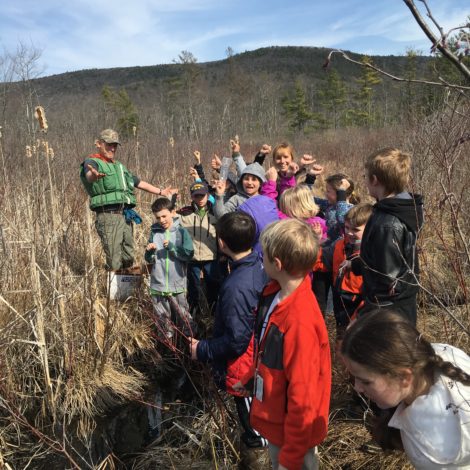 The canoe situated on Muddy Brook, the students and Alsop congratulated each other on the success of reaching Muddy Brook. Photo: David Scribner

In the wetlands, the canoe was set down and pulled through the grass, Alsop and his crew hopping from solid tuft to solid tuft, until the entourage came to the edge of a narrow, shallow pool about three feet wide and perhaps 20 feet long. This, declared Alsop, was Muddy Brook – or at least, its oozy origins. He swung his canoe into the water. Ryan handed him his backpack; he stashed pole and paddles. Then he said his goodbyes to the crew who had brought him this far. He gave them high-fives, and they cheered. He used his pole to push his way through the marsh, disappearing in the still pale tall grass. Students watched him go, then began making their way back to school, retracing their splashy steps.

But it turned out to have been a difficult slog for Denny Alsop. The next day, he sent the following email communiqué:

“Your shoes were a harbinger of what Muddy Brook would do to me that afternoon and evening … I slinked under route seven bridge in Stockbridge at 7 in falling darkness, pretty badly beat up.”