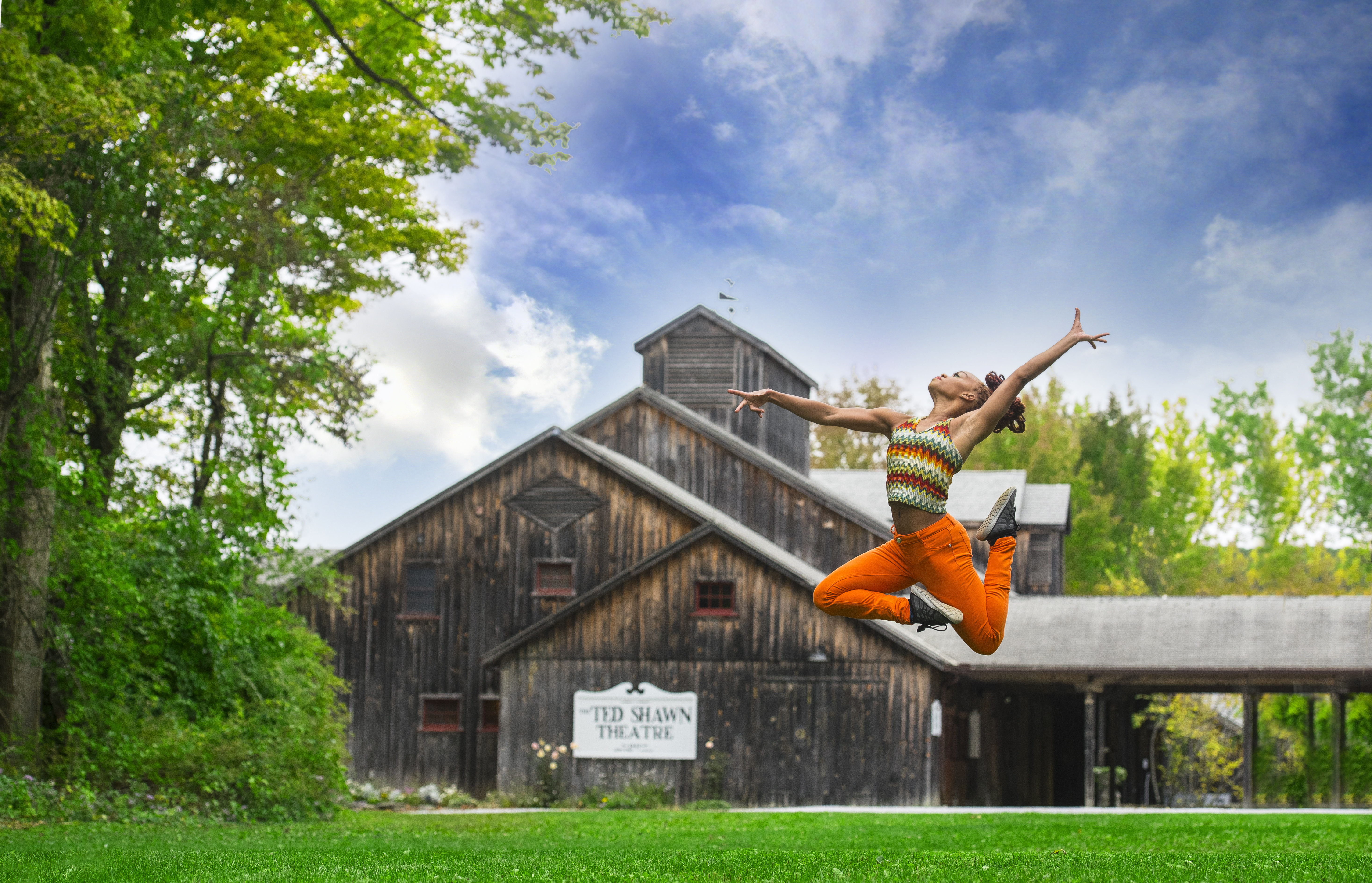 Becket — Anyone flocking to the Jacob’s Pillow Dance Festival this summer has seen Camille A. Brown, perhaps without even knowing: The dynamic dancer, clad in a pair of orange pants and patterned halter top, graces the cover of the 85th anniversary season program in a pose that captures Brown, suspended in mid-air, with sculpted arms outstretched as if in both celebration and reverence. This weekend Camille A. Brown and Dancers take to the stage at the Ted Shawn Theatre to present BLACK GIRL: Linguistic Play, a piece whose introspective approach to cultural themes through visceral movement and sociopolitical dialogues will not disappoint. It has been called “a joyful and moving exploration of childhood innocence, girlhood awareness, and maturation of the Black female through her lens.”

Brown, an alumna of the Intern Program at Jacob’s Pillow, has gone on to become a prolific choreographer making a personal claim on history through the lens of a modern Black female perspective. In her program notes, Brown explains: “BLACK GIRL: Linguistic Play celebrates the unspoken rhythm and language that Black girls have through Double Dutch, social dances, and hand-clapping games that are contemporary and ancestral. As I began to create the work, I realized that I was exhausted by stereotypes and tropes because, as a Black female director, I battle with them daily.” Brown goes on to explain that the book The Games Black Girls Play by Kyra Gaunt inspired the concept for her work. “I started thinking about my childhood and the many games I used to play…and how it was hard for me to find narratives within the media that showcased Black girls being just that: girls. This instantly resonated and became personal.”

The opening moments of Brown’s work are powerful for their being built on music and lighting, both dramatic in their own rights. Pianist Scott Patterson and Robin Bramlett on electric bass anchor the stage for several moments before a brilliantly colored chalkboard wall appears and serves as a backdrop for the first solo dancer, Camille A. Brown herself. What ensues over the course of the hour-long performance is a series of duets between pairs of “girls” who communicate through rhythmically captivating and often explosive foot-stomping and hand-clapping that, as evidenced in Brown’s TedEd talk A Visual History of Social Dance in 25 Moves, chronicles the language of social dances that “bubble up, they change, and they spread like wild fire,” Brown noted. “Social dance is an expression that emerges from a community,” and this intersection, rife with urgency, unfolds beautifully as Brown is joined by the four members of her company: Beatrice Capote, Chloe Davis, Teneise Ellis and Catherine Foster.

Brown’s novel approach focuses on playground games as a source of empowerment; the result is a captivating show, high in energy and emotion, that uses movement, rhythm and personal histories to discover what it means to be a black woman in urban America. “What are the things that celebrate us and uplift us, and are culturally specific? What happens when you take Double Dutch and make it an art?” These questions, central to Brown’s exploration, allow her to emphasize that “in a society where black women are often only portrayed in terms of their strength, resiliency, or trauma, this work seeks to interrogate these narratives by representing a nuanced spectrum of black womanhood in a racially and politically charged world.”

Brown, through her medium of dance, addresses issues and asks questions we can all benefit from: “Who was I before the world defined me?” proves central to Brown’s exploration. She goes on to note, “If our audiences see parts of themselves in our work – their struggles and their joys – regardless of their color, gender, or socioeconomic background, then I know we have done our job.”  Saturday’s matinee performance will take part in conjunction with Lift Ev’ry Voice Day at Jacob’s Pillow Dance.  Founded in 2011, the Lift Ev’ry Voice Festival is a biennial, summer-long celebration of African-American culture and heritage in the Berkshires. The festival, whose name is borrowed from the title of Great Barrington resident James Weldon Johnson’s hymn, “Lift Every Voice and Sing,” celebrates the rich traditions of the African-American community, arts and culture, history and heritage while acknowledging the larger global context in which this community exists. Rather than a site-specific series of events presented by a single organization, Lift Ev’ry Voice is an umbrella under which a wide range of events, exhibitions, forums and celebrations are gathered to create a rich tapestry across Berkshire County.

Camille A. Brown is a 2016 Jacob’s Pillow Dance Award recipient. She is currently developing a new piece with the working title ink – the final installation of the company’s dance theatre trilogy about culture, race and identity. She founded Camille A. Brown & Dancers in 2006. BLACK GIRL: Linguistic Play will be performed on Thursday, Friday and Saturday evening at 8 p.m.; additional performances will be on Saturday and Sunday at 2 p.m. For a special ticket discount to Saturday’s matinee performance only, use the codes LEV2017 for $20 adult tickets and LEVYOUTH17 for $10 youth tickets. For tickets and information, see the Berkshire Edge calendar, visit jacobspillow.org or call (413) 243-0745.